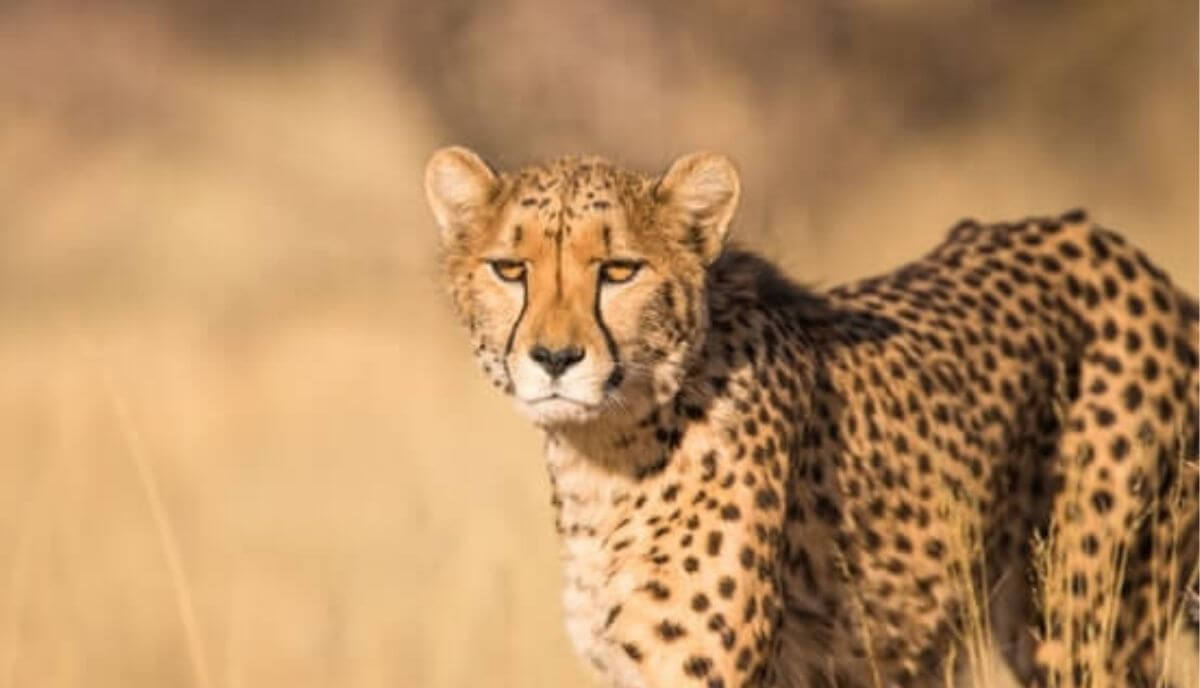 We all know that cheetahs are the fastest animal on land. They have lean limbs and a flexible spine that explain their speed.

But, did you ever wonder how strong cheetahs are? Because I did!

Cheetahs’ main strength feature is their speed, as they can accelerate up to 70 miles per hour which is four times the power output of the fastest man on the planet. In addition, a cheetah can produce a bite force of 500 PSI which is three times stronger compared to a human’s.

Let us get to know more about these majestic cats!

How Strong Are Cheetahs?

Speed is cheetahs’ main strength attribute by far, and this physical ability is where almost all its power goes through. However, cheetahs are more sprinters than long runners, lasting less than a minute at full speed.

In other words, their speed is also their weakness. Cheetahs’ cannot run for long because they need to prevent their body from overheating. Their body overheating might cause the feline to faint.

Although the fastest big cat, cheetahs are the weakest in the family. For example, jaguars are smaller than cheetahs; however, they have a more powerful bite force – three times stronger than cheetahs.

As for their build, cheetahs’ bodies are designed for speed. They are pretty light, weighing 46 to 160 pounds, even with their vast frame.

In addition, these wild cats have smaller jaws and teeth, and their claws do not retract.

Are Cheetahs Stronger Than Humans?

Lucky for humans, cheetahs are friendly and timid cats and have no interest in attacking humans. If they do attack, then you might have disrupted their territorial space.

Though stronger than a human bite, this is comparatively weak to other wild felines.

Their small head means smaller jaw and teeth, which attributes to a somewhat weaker bite. Also, these spotted cats have an average of a one-inch-sized tooth compared to tigers with a three-inch-sized tooth.

As for their strike strength comparison, cheetahs’ can punch seven times stronger than humans.

Are Cheetahs Stronger Than Lions?

No, lions are physically stronger than cheetahs. However, these spotted felines are speedier compared to lions.

Lions do not see cheetahs as their most significant competitors. In addition to the difference in strength, lions are social animals that live in groups, whereas cheetahs are solitary animals.

At the same time, lions can easily steal cheetahs’ meals. These fast felines have no choice but to run away as they cannot defend themselves from lions.

For a sure hunt, cheetahs hunt when the big cat is not around. These spotted felines also make a swift attack before their prey can be stolen from them.

Cheetahs’ bite force is 500 PSI, equivalent to three times a human bite. Interestingly, these wild felines’ bite is as strong as the English mastiff with 552 PSI. Despite not having the most potent bite force out there, cheetahs’ can still seriously injure anyone who falls under their teeth.

Their smaller head, jaw, and teeth contributed to cheetahs’ having weaker bites. These features are a tradeoff for the cheetahs’ speed.

The small head is in proportion to their long, lean body, and at the same time, it streamlines the cheetahs’ running.

Although they have smaller teeth, an average of a one-inch long tooth, it is sufficient to cut through their prey. Cheetahs also use their small jaw to grab their hunt by the neck.

These wild cats evolved to have small teeth because their body is for being fast rather than having brute strength. However, cheetahs hail as one of the most dangerous animals in Africa.

Related: How Dangerous Are Cheetahs?

What Makes a Cheetah so Strong?

Cheetahs’ strength comes from their limbs, organs, claws, and bites.

As for their limbs, these wild cats have long, muscular legs that help them achieve maximum speed.

With their flexible spine, one cheetah stride can reach up to 22 feet. Interestingly, they have smaller hip muscles compared to other fast animals.

A 2011 journal published by the Journal of Anatomy provides that scientists believe that cheetahs’ back muscles generate power to speed their running.

Some theories propose that these wild cats use their speed to take down prey.

However, a 2013 study published by Science Daily provides that cheetahs use their maximum speed only to get closer to their target. Once they are at attacking range, cheetahs usually slow down to match prey escape maneuvers.

Of course, for them to run as fast as possible, these wild felines have solid lungs and hearts. With their powerful organs, cheetahs can maintain their speed comfortably.

To name a few, cheetahs have enlarged hearts, large livers, and arteries. Their organs have adapted to accommodate cheetahs’ rapid speed.

Their body needs a high oxygen intake to transition to such speed.

Besides their internal organs expanding, these wild cats’ noses and sinuses get enlarged. It ensures that cheetahs are inhaling sufficient oxygen to do their speed run.

As mentioned, these spotted cats have one of the weakest ones among the wild felines.

Their bite is half as strong as tigers having 1,050 PSI. However, it is still strong enough to crush their prey’s bones.

After killing their prey, cheetahs will immediately eat the prey’s rear flanks, being the most nutritious part.

Cheetahs need to finish the feeding as fast as possible as other predators like lions and hyenas always lurk around.

Besides their tiny jaws, they have another exciting feature – their claws. Cheetahs have no retractable claws because of their speedy nature.

Instead, cheetahs are equipped with semi-retractable claws, similar to domesticated pets like cats and dogs, which means their claws are protected by a sheath of skin when not in use.

Semi-retractable claws allow these wild felines to maintain traction on the ground. These claws are basically the cheetahs’ running spikes.

Unfortunately, these claws are of no use when killing prey as they are blunt, curved, and are not an effective weapon.

Cheetahs are no question the fastest animal on land, thanks to their firm, lean bodies. However, it is also a tradeoff, making them weaker than their feline cousins.

Having smaller jaw, smaller teeth, and weaker bite force make them a target for other predators. Reports provide that lions and hyenas always try to steal their hunt.

However, cheetahs adapt and ensure that no other predators are around when they hunt. These wild cats also eat their prey as soon as possible because they are not strong enough to hide them.

Cheetahs are also solitary, meaning they rely entirely on themselves, which sometimes can be difficult when you have to compete for food with a family of rivals.

With this, we have completed the “how strong are cheetahs?” article. Thank you for reading!

If you liked this post, here’s another popular read: Strongest Cats