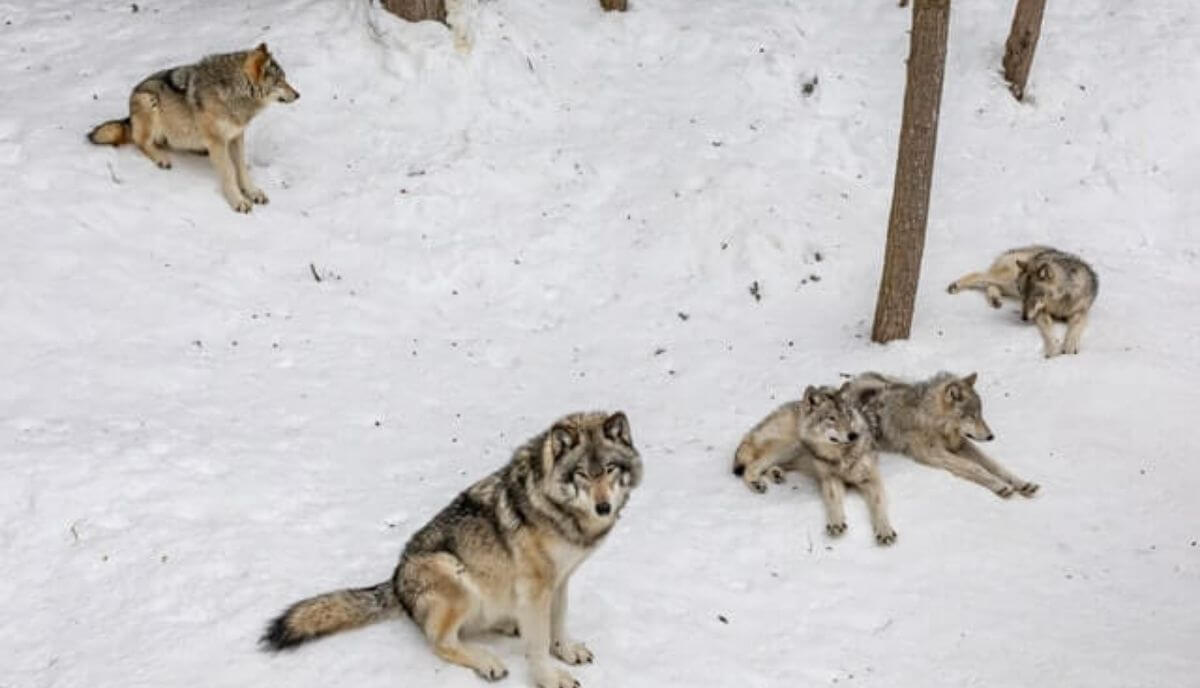 Wolves are natural predators that are at a larger disadvantage compared to other predators. They are constantly faced with the danger of poaching, casualties during hunting, and fatalities in clashes over territories.

With these many options for annihilation comes the question, how long do wolves live?

How Long Do Wolves Live?

Wolves live for about 5 – 12 years in the wild, while the wolves in captivity, with proper care, and close supervision, can live on average 16 years and even more. In the wild, wolves’ lives are threatened by humans, pack fights over defending and claiming territory, the hassle of hunting, starvation, and illnesses due to malnourishment.

Wolves in captivity are reduced by these threats. In other words, there will be no need to defend their territory from intruders, while fatalities from hunting will likewise be significantly reduced.

Also, starvation will not be a threat any longer as the wolves will be fed under supervision. The longest living wolf was about 20 years before it died in captivity.

How Long Do Wolves Live in The Wild?

The life expectancy of wolves in the wild is 5 – 12 years on average. Aside from rapid growth and maturity, wolves face several threats to their survival. Wild wolves do not have any privileges those in captivity get to enjoy.

In order to survive, wolves in the wild have to hunt for their food, protect their territories from the competition, and most importantly protect themselves from their greatest threat, humans.

More often than not, wolves have to go for days without food. While some wolves die from starvation, the others that survive starvation fall ill due to malnourishment.

However, the life expectancy of wild wolves varies from species to species.

How Long Do Gray Wolves Live in The Wild?

Gray wolves have a life expectancy of a maximum of 13 years in the wild. A pack usually consists of four to nine members, at most 15 individuals. While living in packs can be beneficial in hunting, but considering the success rate of landing a kill that is as low as 14%, this could be a played disadvantage in nourishment and survival.

In the wild, gray wolves are the largest of the dog family. An average adult gray wolf weighs about 66 pounds. Although they can go for days without food, grey wolves require at least 12 pounds of meat in a day to be properly nourished. This however is a hard goal to achieve.

Wolves are social animals, which means they live and survive in groups. Aside from the insufficient supply of food, the gray wolves preferred choice of prey is another contributing factor to their life span.

Not only gray wolves, but all wolves species, in general, prefer to prey on ungulates (elk, moose, etc). Considering their size compared to these hoofed animals, gray wolves sometimes get injured badly or killed during hunts.

But the greatest of all threats to the life span of gray wolves are primarily poaching humans.

How Long Do Red Wolves Live?

The red wolf’s life expectancy in the wild is about 4 – 8 years and about 13 years in captivity. Red wolves are smaller in size compared to the grey wolves; therefore they prey and hunt on smaller-sized mammals like rodents, white-tailed deer, etc. And the chances of getting killed or injured during hunts are very slim. Yet, the greatest threat to the red wolf’s life span in the wild is majorly humans and other canids.

Red wolves and canids, like coyotes and occasionally gray wolves, usually find themselves in the same territory. As the natural order, top-tier predators cannot co-exist in the same space hence the fight for dominance and territorial claims. These agonistic clashes usually result in fatalities.

In previous years, red wolves were widespread covering areas ranging from south-eastern Texas to central Pennsylvania. But in recent years, red wolves have been listed as one of the world’s endangered species, without 20 red wolves in the wild, due to encroachment and the distorting of their natural habitat in this age of industrialization.

How Long Do Timber Wolves Live?

Timber wolves, also known as, eastern timber wolves, have a life expectancy of 3 – 8, but with the right conditions, they can reach the age of 15.

Speculations have it that either timber wolves are hybrids of coyotes, red wolves, or just sub-species of gray wolves, which has it that two factors pose as a threat to the life expectancy of timber wolves.

The life span of timber wolves is not only threatened by humans, territory conflicts, diseases, and starvation but it is most at times threatened by hybridization.

When timber wolves are trapped in habitats where other canids like the red wolf, grey wolf, and coyotes are present, the lack of mating partners can force these distinct species to mate, thereby birthing hybrids.

Owing to their short life span, the different stages of the wolf’s life cycle come and go in a flash.

Pups are born after a couple of short weeks of gestation. The 8 – 10 weeks after birth, pups go through infancy. At 11 – 21 weeks wolves are juveniles. They step into sexual maturity at 22 months, about two years after birth.

As winter begins to fade into spring and life begins to slowly creep into the world around us, new lives are being added to the wolf pack. Young wolves, called pups are born after a gestation period of 62 – 72 days.

Pups are born in groups consisting of 4 – 6 Pups. These groups are called litters.

At birth, pups live in either cave, underground holes, or in tangled tree roots prepared by the adults of the pack. In the two weeks after birth, pups have no sense of smell, are lame, and are also blind. They rely on other members of the pack to survive.

Mother wolf will have to feed them her milk for this period, lick them to clean them up, and also stimulate them to excrete. The other members of the pack step in to watch the pups when their mother steps out for a breather.

When pups are about 3 weeks old, they are no more as incapacitated as they were at birth. They can now walk, see, smell, and occasionally eat regurgitated foods.

Pups begin to even play fight, a skill that would come in handy in the future. But they cannot still go outside the den. When the pack is out hunting, an adult wolf of lower rank is left behind to watch after the pups.

When the pups are about eight weeks old they step into the juvenile stage of their life cycle. By this time, the pack will move the pups out of the den and into a designated area.

And just like the good old days, when the adults go hunting, a lower-ranking wolf will be left behind to watch the pup. But this time, the adult will begin to show the pups a few hunting tricks.

Pups will already be learning to make sounds like howling, grunting, etc. Imagine a group of 4 – 6 discovering their new talent… The pack will begin to get noisy and busy with the pups making sounds and learning to use their developing teeth.

Adult wolves will begin to be agitated and the rowdy pups might get some disciplining – a little snarl and lounging usually do the trick. About 14 weeks old, the pups will join the adults in hunting. They will not get into the heat of the fight, just observe to learn. They might even leave before the hunt is over.

Pups will begin to feed on kills instead of the usual regurgitated foods. During the summer, at four months of age, wolves experience fast-paced growth. Pups at this age will fully join in hunting trips and follow in the hunting culture; hoarding food, fighting for better portions, etc.

At times of finding and taking over territories, there are usually fights between different packs. This usually leaves behind several fatalities and casualties. 3 out of 4 wolves might not survive.

Harder times come during winter when the pack has to go through what is called ‘feast and famine’ where wolves have to go long periods after a big feast starving. The remaining pups may fall ill and not survive. The juvenile stage is the rockiest of stages for wolf pups.

Wolves are social animals so they live in packs. And just like in human civilization there are ranks in every wolf pack. The alpha male and female are the highest-ranking members of a wolf pack.

As the highest-ranking members, they are the only ones responsible for reproducing litters in the pack. So at maturity, pups either leave the pack to start their own or become lower-ranking members of the pack that help in nursing the new litter the next year.

Or they might fight their way through the ranks and eventually end up being the breeding couples. And the cycle continues.

The life expectancy of wild wolves is between 5 and 12 years; however, their longevity depends on various reasons, foremost food supply, and poaching. Wolves in captivity do not have to worry about food or being hunted, so they live longer, with an average lifespan of 16 years.

And that’s about it. If you have wondered how long do wolves live – now you know.

We hope you enjoyed the article, or at least that you have learned something new about these canids.

For the very end, here’s our recommendation for a similar article: How Long Do Geese Live?