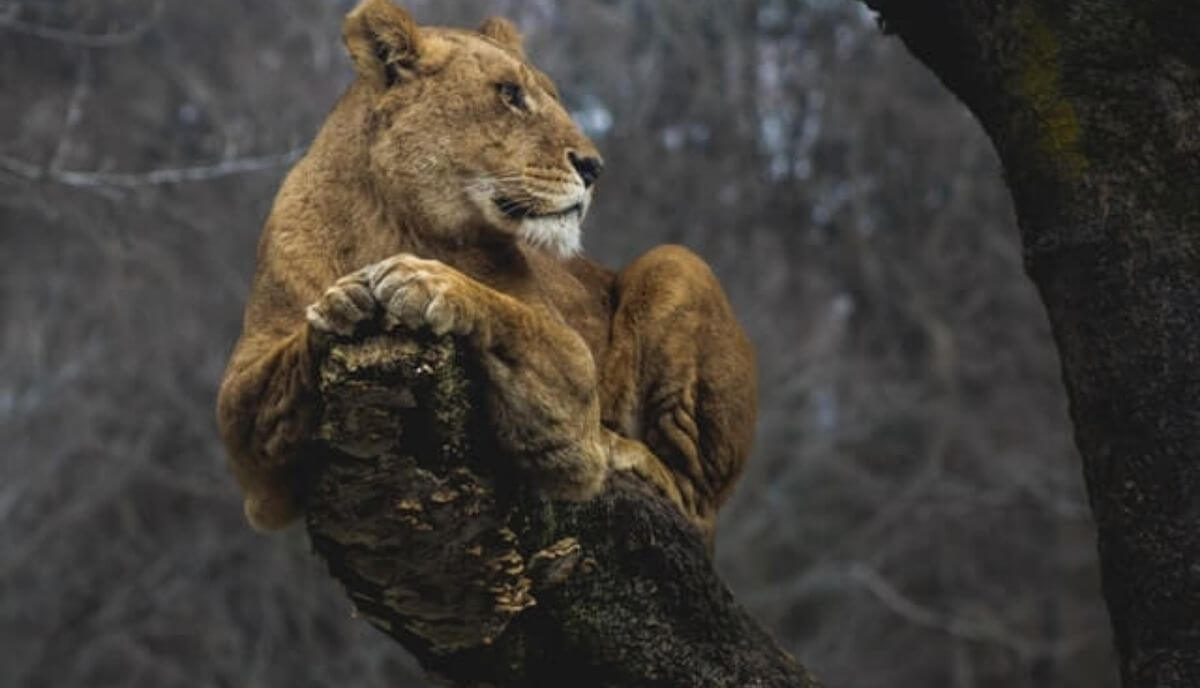 The lion, also known as the “king of the beasts”, is one of the most popular African animals. It is a well-muscled creature with a large head and muscled body.

Their jumping capacities allow them to hunt some of the tallest animals on the planet, such as giraffes and elephants. But the question is, how high can a lion jump?

According to the research, African lions can jump around 12 feet high vertically and up to 36 feet horizontally. They have powerful and flexible leg muscles that help them jump high and climb trees despite their bulky bodies. The ability to jump high is a significant characteristic of lions, as their chief hunting method includes pouncing on their prey.

How Can Lions Jump So High?

Lions are apex predators, which means they are at the top of the food chain. Lions have many physical adaptations and predatory features that allow them to be ranked high in the food web hierarchy. One of them is the ability to jump pretty high.

Here are some of the main physical traits that make lions high jumpers.

Despite their heavy and bulky bodies, the lion’s muscles and tendons are tightly connected. Their strong and flexible muscles keep their bodies in shape and assist them in high jumps.

However, gaining big muscles would be impossible without a proper diet. Lions are carnivores, which means their diet is rich in protein. Proteins play a critical role in building lean muscles.

But, besides the diet, lions are born with the genetic code of powerful cats. Meaning their bodies are naturally designed to be muscular, which pretty much guarantees strength, agility, and other necessary athletic characteristics like jumping high.

The lion’s legs are the key features that make them skilled jumpers. Their strong hind leg muscles enable them to leap high both horizontally and vertically.

Their powerful legs are also fundamental for running quite fast. Lions can reach speeds of 50 mph, however, by lacking stamina, they can only maintain their top speed for short bursts.

Because of this, lions’ preferred method of hunting is ‘stalk-and-pounce.’ They use their hind legs to leap forward and their forelegs to grab and take down the prey.

The paws of lions are very soft, which enables them to move quietly without being heard. When a lion jumps, its sharp claws provide a strong grip on the ground (or prey), while padded paws help them with landing and preventing it from falling.

A lion’s paws and claws are the same found in a domestic cat’s, only much bigger. They also have four toes on their hind paws and five on the front.

How Do Lions Make Use Of Their Jumping Ability?

Being able to jump is beneficial for the lion’s various aspects of life. However, here are some of the most common uses of the high jumping ability.

The main use of high jumps is seen in hunting. Unlike many carnivores that use pursuit tactics, lions are ambush predators, and they implement their hunting strategies by following the prey from stealth mode and utilizing the element of surprise to attack.

Lions will often try to get very close to their prey from an ambush position and will wait for the perfect moment before leaping on it. And this is where their jumping ability comes into play.

Most commonly, lions will leap on their prey, targeting the neck of the animal, where they inflict the bite of death. Being able to jump high is the number one physical trait that comes in handy, especially when they go after big animals.

Lions are the largest big cats, and they usually weigh around 600 lbs (272 kg). Carrying their heavy bodies and climbing on trees can be a difficult task.

It is safe to say that lions, unlike other big cats, are not proficient climbers. But, thanks to their jumping ability, climbing is possible. When climbing, lions enter a tree at a run, leaping up in the air and using inertia to climb up.

Even though they are primarily terrestrial, lions sometimes go on trees to protect themselves from insects and avoid wet grass.

As opposed to most cat species, lions are social animals that live in groups. A group of lions is called a pride. Both male and female lions protect their pride from humans and other animals.

The jumping ability help lions to quickly leap and fight back attackers in order to defend their pride. Sometimes the jump and fast reaction may be crucial for the life of some pride individuals.

Hyenas, leopards, cheetahs, and other lion enemies are constantly looking for an opportunity to cut down the competition.

Even though these predators would never target an adult lion, they would look for weakness in terms of lion cubs. The agility, speed, and jumping prove to be useful when encountering these bloodthirsty opponents.

In Summary – How High Can a Lion Jump?

To sum up, lions can jump up to 36 feet when leaping horizontally. As for vertical jumps, lions can reach heights of 12 feet. These animals are one of the strongest big cats species, equipped with powerful muscles in their legs that allow them to reach extended jumping heights.

And that’s about it. Thank you for reading. Hopefully, you’ve found the “how high can a lion jump” article useful or that you’ve at least learned something new about these majestic creatures.