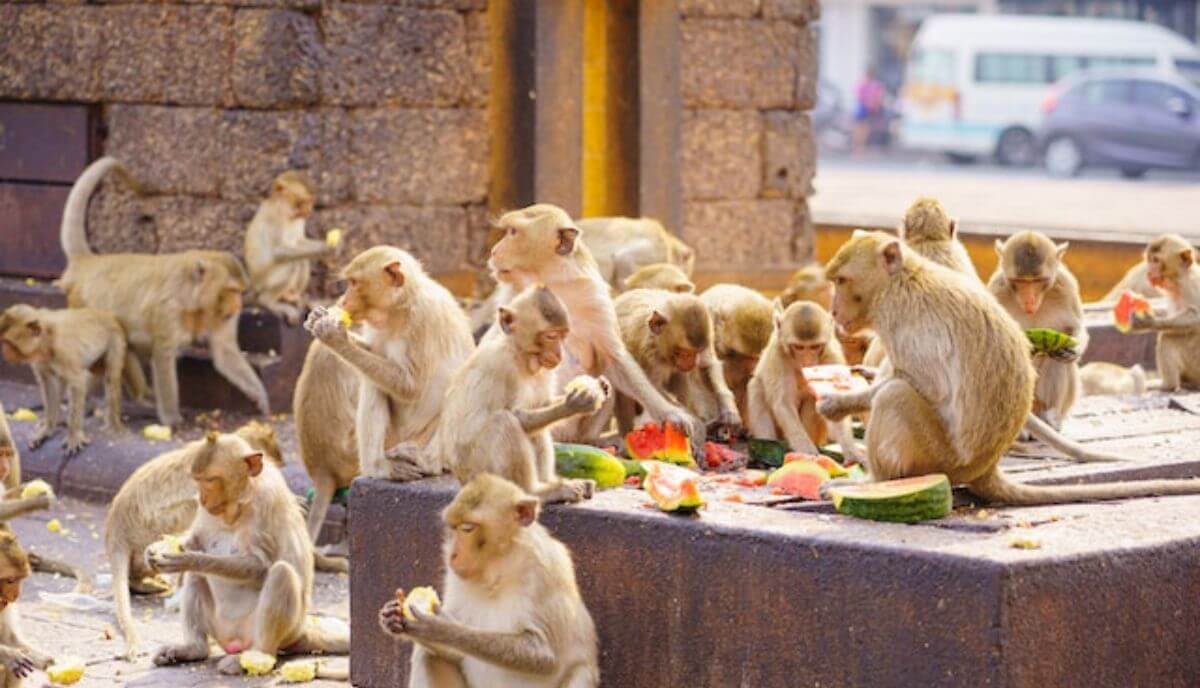 Besides being intelligent animals, monkeys are some of the most social creatures on the planet. They dwell in a variety of different social systems depending on their breed, habitat, and other factors.

But have you ever wondered what a group of monkeys is called?

The most common name for a group of monkeys is a troop, while other accepted names for monkey groups are a tribe, a cartload, and a barrel. Generally, a group of monkeys consists of up to 40 members, but the number can vary depending on the species.

If you are interested in learning other facts about these intelligent primates – keep reading.

Why is a Group of Monkeys Called a Troop?

There is little to no scientific backing or origin for the name ” troop of monkeys.” However, it is believed that monkey groups are called troops because of their ability to live, work, eat, and behave together as a group but also because of their social structure (which is very similar to that of humans).

Another explanation behind the name is that the overt organization of monkeys living together is similar to that of a troop of soldiers.

A troop of monkeys will frequently engage in conflict with neighboring clans over resources like food and territory. Exhibiting teamwork and collaboration for the good of the group is comparable to the behaviors displayed by a troop of soldiers.

A monkey troop has a strict hierarchy, and the most dominant male is the head. Apart from the leader, a group includes other low-ranked males and numerous females with their offspring.

The leader protects the troop from danger and has access to all the females within the troop. However, his reign is constantly threatened as many males want to displace him.

Before they take charge of their own group, male monkeys who don’t make up a “one-male leader group” frequently live together.

Other Collective Nouns for a Group of Monkeys

Collective nouns are words used to refer to a group of animals. The most popular collective noun for monkeys is “troop.”

However, depending on their behavior and social structure, they are other collective nouns for addressing monkeys.

Besides the expression “troop of monkeys,” a “tribe of monkeys” is the most popular and widely known collective noun for a monkey group. A tribe of monkeys is a group of monkeys that live in communities and perform their activities together.

Apart from being used as a collective noun for monkey groups, the term “cartload” has become an idiomatic expression for someone behaving mischievously.

When a group of monkeys is actively engaged in their numerous monkey businesses, one can use the term “barrel” for them. “A barrel of monkeys.”  The phrase has become popular in everyday life and describes a group having a lot of fun – “you guys are having more fun than a barrel of monkeys.”

Read Also: Most Dangerous Monkeys in The World

Why Do Monkeys Live in Groups?

Monkeys are very much like humans behavior-wise. They eat, groom, fight, and sleep together.

The primary reason monkeys live in groups is for protection, but there are a few other reasons.

Females stay within the group to maximize their success in reproduction. A group of monkeys has at least one mature male for breeding. In a group, there is no need for the female monkey to seek out attention.

Defending their resources as a group is more effective than individually. Monkeys band together in order to defend the food source from other animals. As we say, “there is strength in numbers.”

Female monkeys prefer to stay in groups for natal reasons. A tribe usually has a significant number of females, and during birthing labor, these females help each other through the birthing process.

A group is always safer from predators than an individual. The monkeys stand together to prevent predators from killing the young or stealing their territory.

What Was The Largest Monkey Group?

The largest ever recorded monkey group numbered 1,300 mandrill individuals. Mandrills usually stay in a group of a few hundred, but this particular group in Lope National Park in Gabon was the most populated group of any monkey species.

A group of mandrills consists of females and their offspring. The males live alone and join during the mating period.

Aside from having the most extensive monkey group (that is referred to as a horde), mandrills are also the world’s largest monkeys and can weigh up to 119 pounds. 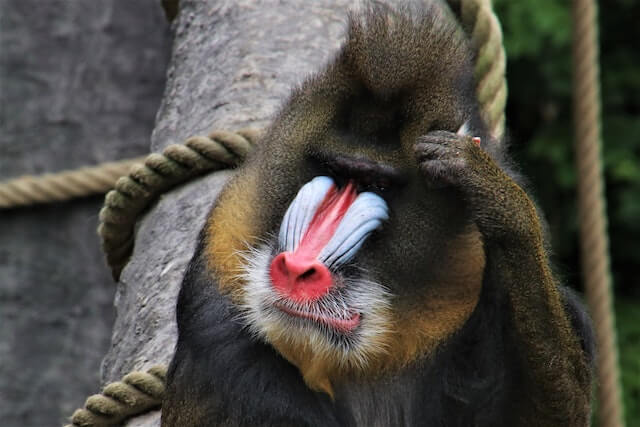 These unique-looking monkey species are native to the tropical rainforests of Guinea, Congo, and Cameroon. They are among the list of vulnerable species facing extinction.

Due to their large build, mandrills are regarded as the strongest monkeys in the world. They are not predators, though, as their primary food sources consist of fruits, plants, and tiny insects like termites and ants.

On the other hand, mandrills are preyed on by big cats, especially leopards.

And there you have it. A group of monkeys is most commonly called a “troop.” However, there are other collective nouns that describe a group of monkeys. Depending on their activities, you can call them a tribe, a barrel, or a cartload.

Monkeys are highly social animals that move and live in groups for several reasons, most notably survival. The groups usually consist of a few monkey individuals, up to 40+ primarily females and a few males.