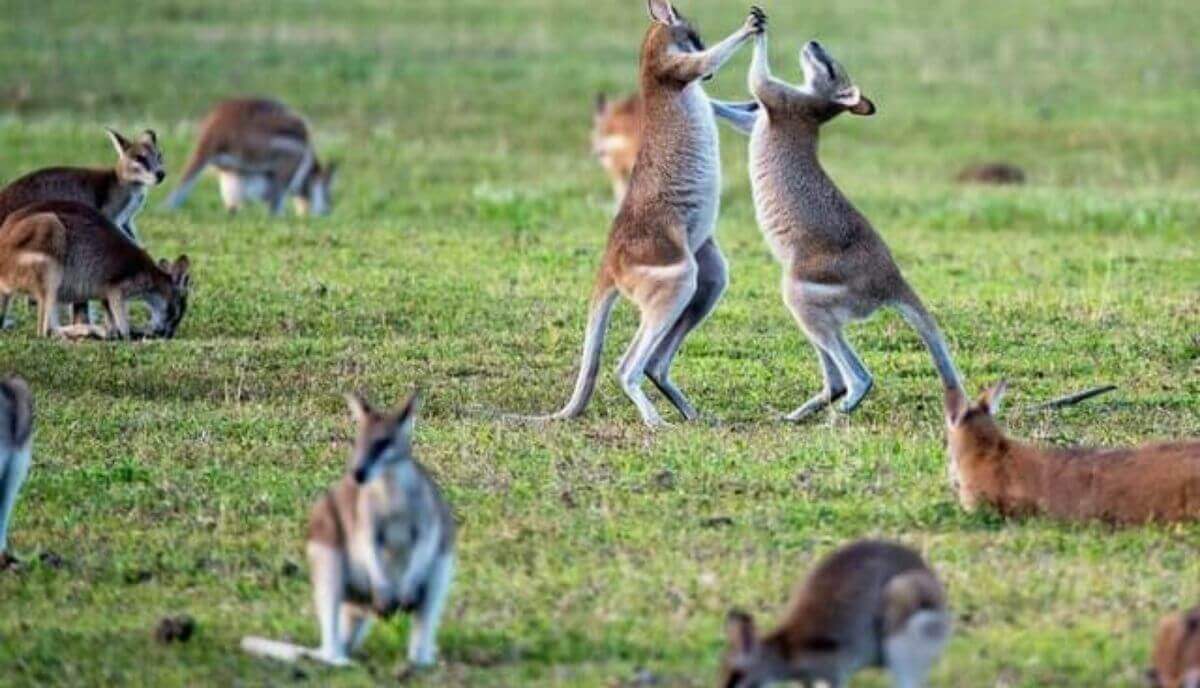 As the world’s largest marsupials, kangaroos are highly social animals, which is one of the main reasons why you would often come across groups of kangaroos rather than individually. Yet, what many people wonder is – what is a group of kangaroos called?

One may ask, why is a group of kangaroos called a mob and not something else, like herds or flocks?

The reason why kangaroo groups are not called herds of flocks is that they do not have herding behavior, which refers to all the individual animals in a group acting collectively, and each one following the group’s behavior and movement.

Kangaroo groups are called mobs because it describes their behavior of scattering away when threatened, and individual members of a group moving at liberty.

You’ve got plane tickets for Australia ready? You’re all excited to visit the kangaroo land and meet different marsupials. Well, wait. Knowing what is a group of kangaroos called is not enough. Let’s find out what are some other useful kangaroo terminology.

What is a Male Kangaroo Called?

A male kangaroo is called a “boomer” or a “buck” and is capable of leaping to a length of up to 30 feet. Also, male kangaroos are pretty strong and muscular and can reach speeds of up to 60 km per hour (40 miles per hour).

These fights tend to be longer and can happen all of a sudden when two large males or two small males challenge each other. In most cases, large male kangaroos do not accept challenges from smaller male ones.

Related Article – What is a Group of Lions Called?

What is a Female Kangaroo Called?

A female kangaroo is called a “doe” or a “flyer”. Probably the most well-known face of kangaroos is that they have a pouch where they carry their young, and this credit goes to female kangaroos.

One of the most surprising facts of female kangaroos is that they tend to be pregnant almost permanently. Yes, within a few days of giving birth to the young, a doe mates again and conceives.

However, the truly astonishing aspect is that she can pause the embryo from developing until the baby roo in her pouch is grown enough to leave. This process is known as embryonic diapause or just diapause.

After the “joey” leaves, the paused growth of the embryo resumes, leading to the birth of a new baby roo in a period of around 30 days. During this time, the female kangaroo produces two different milk compositions to adapt to the increasing population.

Read Also: What is a Group of Pandas Called?

What is a Baby Kangaroo Called?

A baby kangaroo is called a “joey”. A joey is born only after a very short gestation period of one month. Even in red kangaroos, which are known to be the largest of the species, the gestation period is only just over 30 days.

Baby kangaroos, at birth, are blind, hairless, and are just about an inch in length. At this stage, their forelegs tend to be more developed than their hind legs, and they use the same to reach their mother’s pouch through her abdomen. The mother kangaroo’s pouch is where the vulnerable newborns feel safety and comfort.

Since a newborn roo cannot suckle on its mother’s teat or swallow, the mother pumps milk down the throat of the little one using her muscles. With time, the neonate grows rapidly, and once the joey is quite grown and large, say after around four months, it will be developed enough to get out of the mother’s pouch, taking short trips in the outside world, grazing.

This continues for a while, and after about 10 months, the baby roo will be ready to exit the pouch once and for all.

Why Do Kangaroos Live in Groups?

Belonging to the marsupial family Macropus, which literally translates to “big foot”, kangaroos live and travel in mobs, or groups, for their own protection, and to protect the members of their group from any potential danger.

If any member of the mob senses the danger, it will warn other individuals, usually by stomping on the ground. (source)

In any particular mob, it is the largest male kangaroo of the group, called a “boomer”, that leads and dominates (based on his age and size), especially during mating season.

In Summary – What is a Group of Kangaroos Called?

And there you have it. A group of kangaroos is called a mob or troop.

Have you already known but simply couldn’t recall it?

Either way, I hope you liked this article and learned something new about kangaroos. At the very least, you’ve boosted your roos’ knowledge and now are ready to brag with your friends and family.

Thank you for reading. I would want to recommend you another kangaroo article – Are Kangaroos Dangerous?