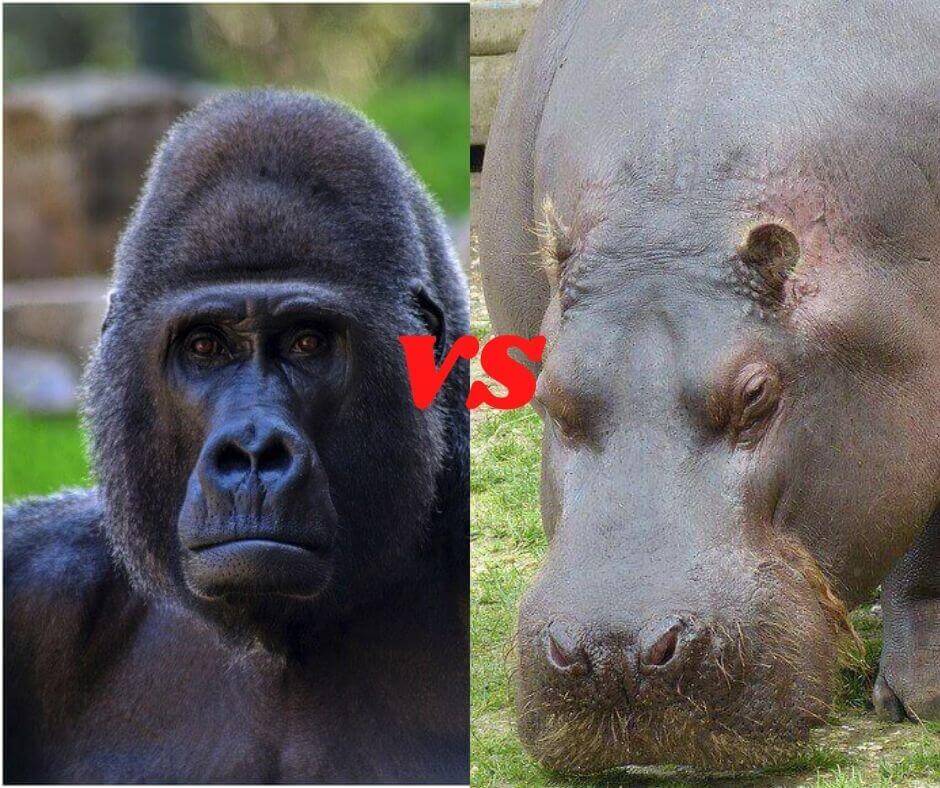 The chance of seeing the fight between a gorilla vs. hippos is close to none. And so, the question of who would win in a fight is not that simple to answer.

However, this does not mean we cannot make a prediction and possible fight scenario results by examining some key facts about gorillas and hippos.

Let’s get to know the two animals

The gorilla is the largest (non-human) living primate. These apes are mainly herbivores, and their diet usually consists of fruits, leaves, stems.

Gorillas live in tropical and subtropical forests of Sub-Saharan. 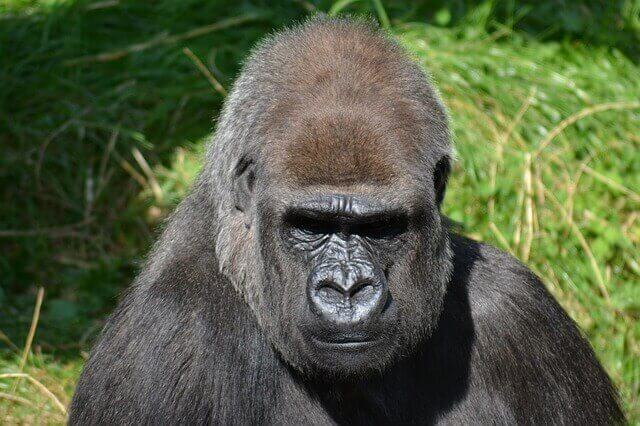 Today, there are around 200,000 gorillas in the world, and they are the most endangered of all ape species.

In general, gorillas are quiet creatures, however, they sometimes scream, bark, and roar. Scientists were able to detect 24 different sound vocalizations.

Gorillas live in groups ranging from two to more than 30 individuals. The most dominant and the strongest adult male leads the group.

The hippopotamus, also known as the hippo, is a large semi-aquatic animal that also inhabits Sub-Saharan regions.

These huge animals are most active during the night (when foraging), while most of their daytime they can be seen cooling off in rivers and lakes. 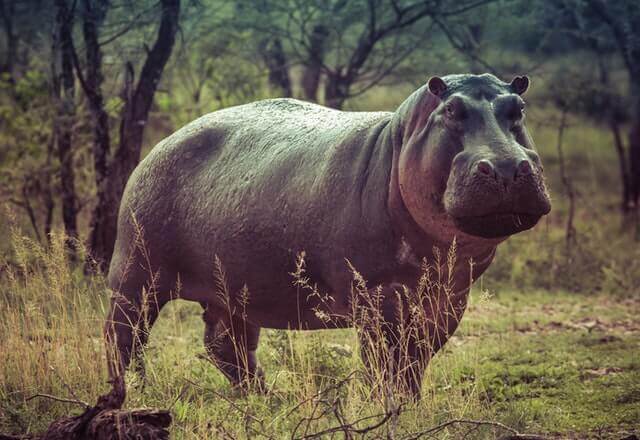 Hippos are the third-largest land mammals, right after rhinos and elephants. Regardless of the similar physical appearance as a pig, these beasts are most closely related to whales, dolphins, and porpoises.

Despite being highly territorial, hippos are generally social animals, and they live in groups called schools. Schools are usually made of 10 to 30 individuals.

Today, there are less than 150,000 hippos left in the wild, and they are considered vulnerable species in terms of conservation status.

Gorillas are generally peaceful, shy, and non-aggressive animals. Unless previously provoked. If threatened, gorillas can be dangerous.

As mentioned, they live in larger groups, but they tend to be not territorial, and they are even tolerant of members of different groups in case their territories overlap.

On the flip side, hippos are extremely territorial and often aggressive. However, what’s interesting, is that hippos are only territorial in the water. On land, they usually ignore other individuals.

Their temperament can be reflected in the fact that adult hippos sometimes kill younger ones for no particular reason.

Still, adult male hippos are protective of their groups, and to scare off potential enemies, hippos open their big mouths and display their deadly teeth.

The killing power of the hippos is largely fueled by their ferocious bite force. They can open their mouth at a 180-degree angle, with the whooping bite force of 2000 PSI (pounds per square inch.). 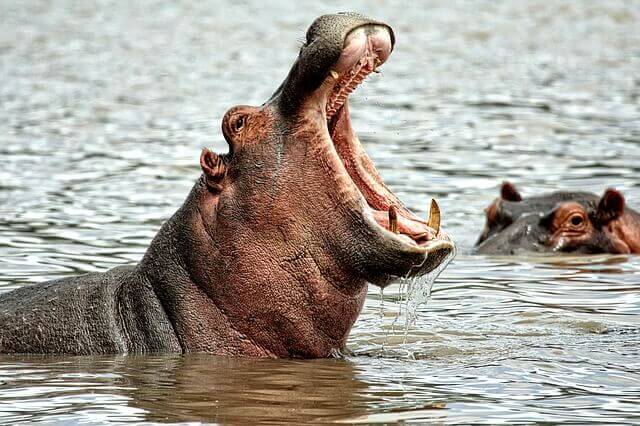 Besides bite strength, hippos rely on their enormous size, and they fight their enemies by pursuing them and knocking them down on the ground.

They might look like gentle and calm animals, but these giants kill more than 500 people per year in Africa.

Gorillas, on the other side, are equipped with razor-sharp canines, and their bite power is measured to be at around 1,300 PSI. 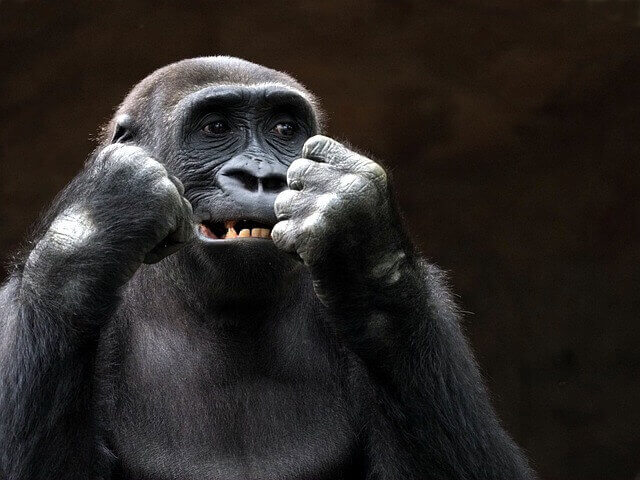 It is believed that gorilla strength is about 10 times their body weight. An adult male gorilla is stronger than 20 humans combined!

Researchers have also discovered that a gorilla can lift a weight that is 27 times their own weight.

Despite appearing slow and clumsy, hippos, on land, can reach running speeds of 30 mph (48 km/h).

Although they can’t maintain high speeds for a long time, these bulky animals can reach maximum speed in just a couple of seconds. Which results in catching their enemies by a surprise.

However, when it comes to running, great apes are capable of moving quickly over rough terrain.

For hippos, the first line of defense lies in their size. Not many creatures would dare to attack hippos in the first place. Besides that, their thick skin serves as armor which is very hard to break.

Still, if someone still decides to do so, hippos will defend themselves by living in the herds. And if one of the members is endangered, the others will join in to defend it. 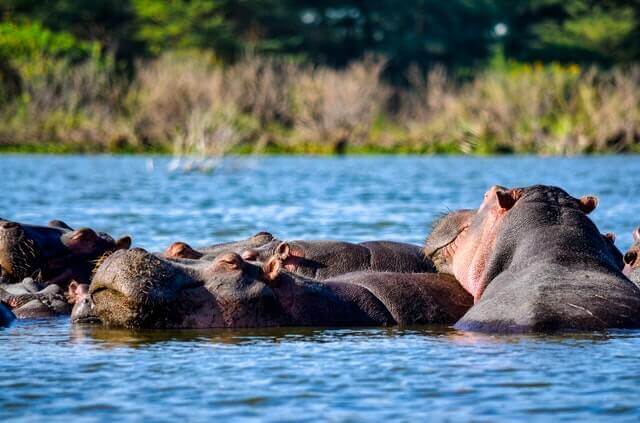 Besides its powerful bite, a hippo will use its bulky head to bludgeon both for defense and for attacking potential predators.

When threatened, gorillas will also use their numbers for defense purposes. However, if the gorilla is lonely and there is a great danger, it will use its climbing abilities to escape. 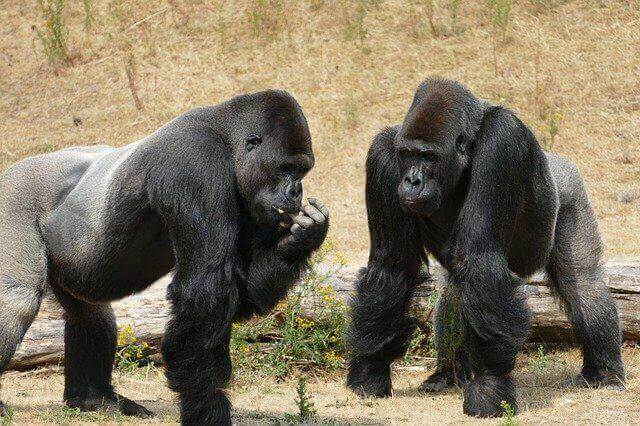 Also, when facing predators, the gorilla will start banging its chests and display its sharp canines in order to scare them off.

When they are in fighting mode, gorillas would take advantage of their extremely powerful arms, legs, and bites, which are often fatal to their enemies.

Gorillas are considered highly intelligent animals. In captivity, some gorilla individuals have an IQ between 75 and 100.

Knowing that the average IQ for humans is around 100, it is easy to realize how smart gorillas actually are.

On the other hand, hippos, despite being related to the whales are not as intelligent.

Unfortunately, no special tests have been conducted to measure hippos intelligence, but based on their behavior, these animals are not overly smart, but they are not stupid either.

Gorilla vs Hippo: who would win?

Considering all the key facts, in a hypothetical fight between a gorilla and a hippo, the hippo will most likely win in a fight. The hippo is much larger than a gorilla, and that would be its main advantage for securing the victory.

A battle between a hippo and a gorilla will depend on four factors: size, strength, intelligence, and skill. The gorilla may have skill and intelligence on its side, but the raw power and gigantic size of a hippo would be crucial in a fight.

As a result, our winner in a potential fight between a gorilla vs hippo is a hippo.