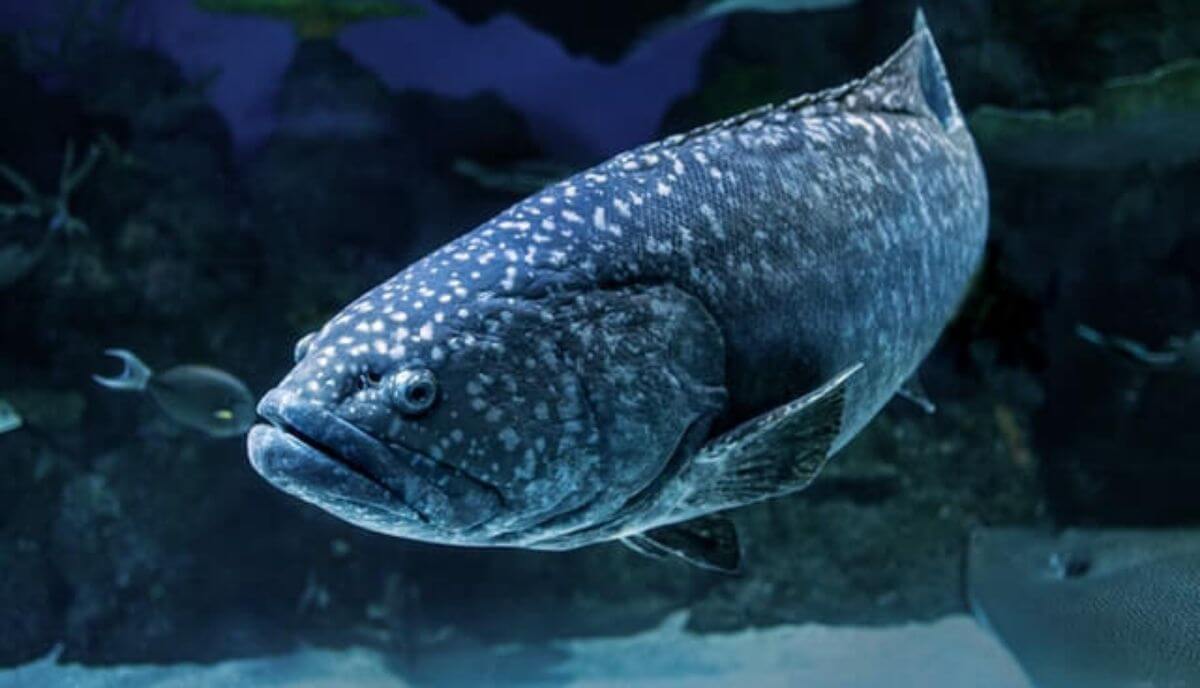 At some point in our lives, we all have wondered which animals have the juiciest lips. But have you ever thought about fish with big lips?

To find out which fishes are with the best lips, we compiled a list of eight fish with the biggest ones.

If you are curious to find more about them, read on and find out everything you need to know in this article! 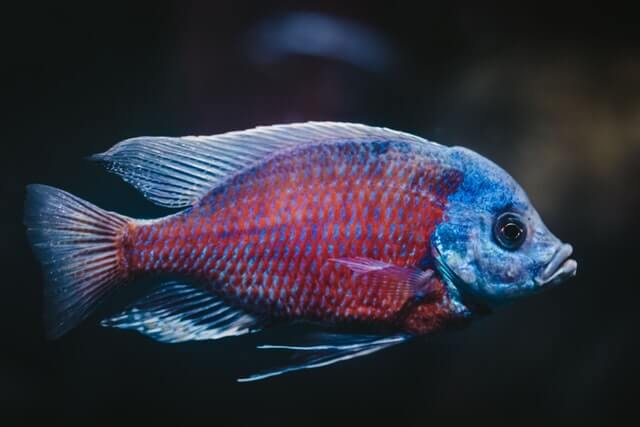 Starting the list with the Red Shoulder Peacock Cichlid, a fine example of big-lipped fish. This tiny 5cm creature loves to dwell on sandy bottoms and rocky shores.

It is better known as a tank fish, as many people like them for their colorful appearance and often want to have them.

The fish can be seen in various colors, varying from blue and red to even gray and light brown when it comes to their appearance. Their scales are shiny and take a colorful, glittering effect under the sunlight, making them even prettier.

Talking about this exciting fish, we have to mention their diet. If you get one – for your fish tank, you should buy specialized food specifically for this fish from the store.

Usually, it is in granulated form and will be recommended by the owner. Aside from that, this species can feed on larvae and even mosquitos, especially if they are in the wild.

Interestingly, although they are mostly peaceful, they may become aggressive and territorial if the other fish in the tank is from a different color pattern. 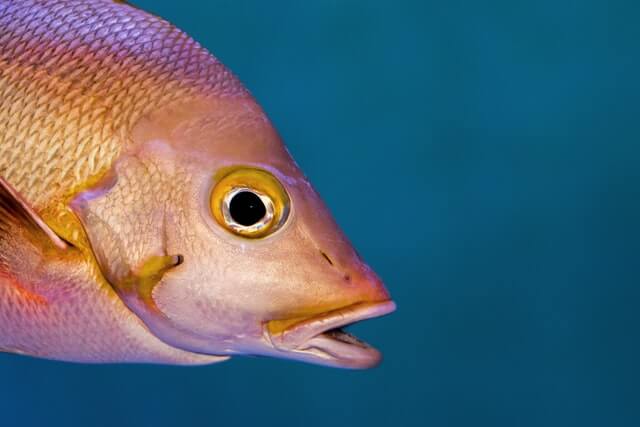 This friendly fish species was initially found in 1775; it stands out with its exciting paddle-like tail, scale colors, and large lips.

The paddle tail snapper is a fish that dwells in the reefs and often inhabits the deep lagoons where they swim in large groups (aggregations) with fishes of the same kind. They are fond of tropical waters, so they usually swim in waters between 24 and 34 degrees Celsius.

This kind almost always has a black tail, humped head, and round lobes – usually in red or black color similar to their tail when it comes to outer characteristics.

The Paddle Tail Snapper can reach up to 50 centimeters.

Their diet is exciting; they usually feed on anything small that they can eat – literally! So, for example, on their menu are creatures like worms, small fishes, octopuses, gastropods, crabs, etc.

Interestingly, the Paddle Tail Snapper is a night feeder. These fish prefer to feed at night as it is best to hunt their prey around that time of the day. 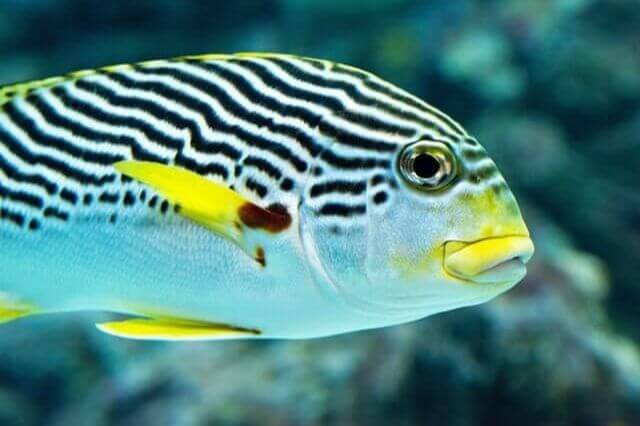 Next on the list is the Sweetlips fish – the name talks for itself.

These fish have lips, and what lips! Natural ones are big, pretty, and juicer than most other fish species.

The species love the warm waters; you can see them in coastal coral reefs ( many tourists enjoy diving to know the species), shallow waters, reefs, etc. They inhabit the vast territory in the west-Indo Pacific ocean.

This fish is entirely on the big side compared to our other contestants. It can reach up to 70 centimeters and up to 1.5 kilograms!

It has pretty colorful scales, and patterns can differ from fish to fish. The standard scale colors are black and yellow, white, brown, and gray.

Looking at its diet, we can say that it is a significant and healthy fish that prey on small tiny sea creatures. On its menu, often dishes are the crustaceans, some worms, tiny and slow fishes, and something we all enjoy – shrimps.

Interestingly, the Sweetlips fish make weird grunting sounds when communicating. However, it is still unclear how they communicate with each other as all we know is about that sound. 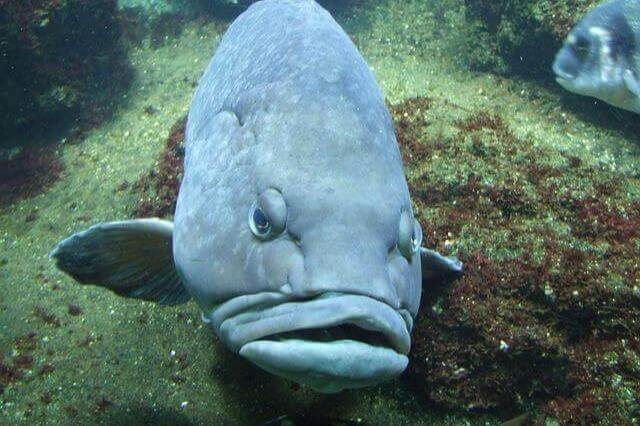 The Napoleon fish is next in our Ranking. Also known as Napoleon Wrasse, it is a massive fish, some of the largest reed fishes on the planet.

The fish has a humpback head and an attractive, colorful pattern of its scales when it comes to its appearance. Talking about a specific color or design will be challenging as it varies based on gender, age, and even sex.

When it comes to its size, we can say that it can reach up to 2.3 meters and up to 200 kilograms making it the enormous wrasse known to us!

This significant fish habitat is also the reefs. It favors the steep outer reefs and the lovely lagoons as its primary choice of home.

The species can be seen in the Indian Ocean, the Red Sea, and the Pacific ocean – a hidden spot of the Napoleon fish, is the coral reef drop!

As for its diet, we can say that it eats anything like small fish, urchins, shellfish, sea stars, crabs, and even dead corals! They also tend to look for worms and mussels and break the shells of other creatures they find on the bottom of the reefs.

The exciting thing about them is that they are immune to poisons and toxins. That allows them even to eat poisonous box bishes! 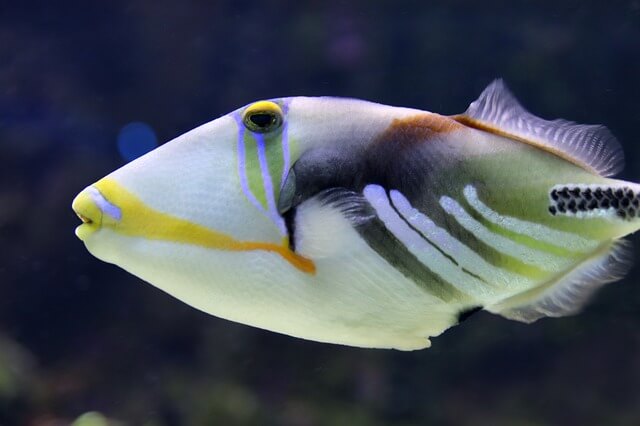 Next on our list is the Triggerfish. This colorful representative of the sea life loves the shallow outer reefs and can often be seen inhabiting them.

You can see them around the globe, but mainly in the waters of the Indo-West Pacific up to the Red Sea and around Japan.

At first look, the red-toothed fish has dark blue to deep purple colors, making it distinct from the other triggerfish species ( usually colorful ones). In addition, the fish is not among the smallest ones as it can reach up to 30 centimeters.

When it comes to its diet, we cannot say much. Besides that, the small fish with big lips have a surprising smallmouth.

But on the other hand, the red-mouth Triggerfish often eat sponges and zooplankton.

An interesting fact about the Triggerfish, in general, is that there are many different species. For example, besides the red tooth one, about forty other known species and probably some unknown ones.

The main difference between the species is their colors – as they all have different colorful scales. 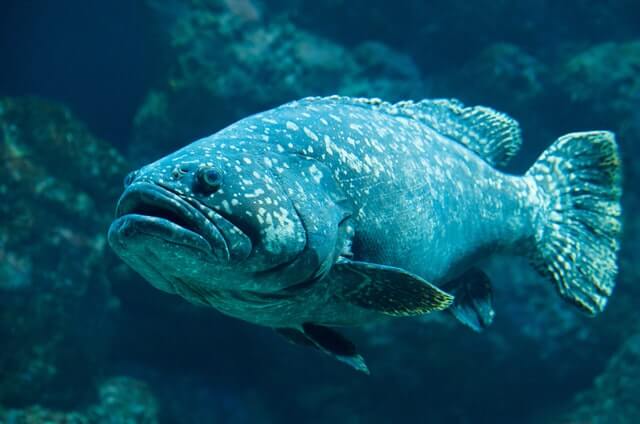 From tiny to bigger fish, we go and go. If you were surprised by the Napoleon fish sizes, wait till you learn about the Queensland Grouper!

This giant sea creature can reach up to 2,5 meters and up to 360 kilograms! It is pretty on the big side and probably among the most extensive reef fishes globally.

The other appearance of the fish looks like a robot body, with substantial fleshy lips (someone would call them juice – we don’t judge!) and a rounded tail. The usual color pattern is between yellow and brown or a mixture of the two colors.

Its habitats are in the Gulf of Mexico and the Florida Keys, with favorite spots in the coral reefs and some tropical waters. However, the fish cannot be seen in huge areas because it is highly endangered, and only a few species are left out in the wild.

The Queensland Grouper diet includes sea turtles, small fishes, and even sharks which it can catch! However, it is a pure carnivore species, so it hunts and preys often.

The Flowerhorn fish is the final contestant in our list of fish with big lips.

We can say that they are the most unnatural natural winner when it comes to this species because they were purposely bred to look nice and to appeal to the eye – not to the lips.

Flowerhorns usually have colorful scales that vary in colors like red, white, black, yellow, blue, etc. They are up to 40 cm in length and have an exciting characteristic.

The most notable feature is the round part of their head, the fan-shaped tail fin, and the dorsal one that runs across the fish’s back.

Its diet is an exciting mixture. Usually, it can feed on various insects, but it often eats worms and even shrimps, and sometimes even plants matter.

Interestingly, this species is that they cannot be seen naturally in the wild. They are bred to be living in fish tanks mainly because of their beauty.