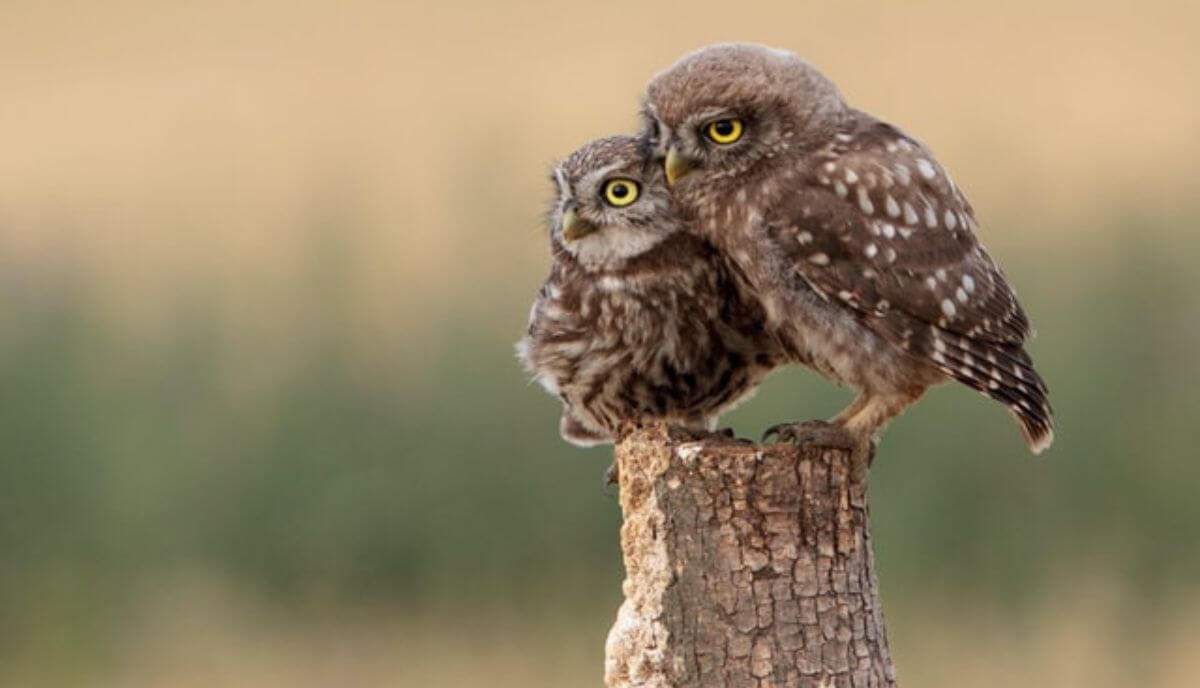 Trying to differentiate between male and female owls can be a challenging task, even for animal experts. There is little to no difference, even when the same species of the opposite sex are standing next to each other.

However, in this article, we’ll try to help you learn more about female owls and hopefully help you determine the main differences between them and their male counterparts.

What is a female owl called?

Female owls are called hens, as is the case for chickens and many other bird species. Although, unlike chickens, male owls are simply called owls. Female owls differ in size and appearance across different species; however, female owls are usually larger than males.

There are some 250 species of these primarily nocturnal, predatory birds living worldwide, except for Antarctica.

Owls vary considerably in size, coloration, appearance, behavior, and hunting styles, depending on the species. However, all are equipped with exceptional eyesight and hearing and are formidable hunters.

Interestingly, owls do not have a sense of smell, relying solely on their sight and hearing to detect prey.

They are also remarkably quiet flyers, making them very difficult for unsuspecting prey to detect.

An owl’s diet consists mainly of small mammals, reptiles, amphibians, and other birds, although some species, such as the North American flammulated owl, only eat insects.

Owls are generally solitary creatures, coming together only during the mating season when the couples spend a lot of time socializing with one another. Some owls may choose to roost together outside of the mating season, usually for warmth or protection from larger predators.

A few owl species can be kept as pets, though in most countries, this is illegal or only legal with a permit. Experts also generally advise against keeping owls as pets, as they are not particularly sociable and require particular care.

Different species of owls exist in a wide range of sizes and weights. However, regardless of the species, female owls usually being slightly larger than males.

The smallest species is the elf owl, which weighs barely an ounce (30g) and measures around 5 ¼ inches in length. The largest owls are the highly endangered Blackiston’s fish owl and the Eurasian eagle owl, which both weigh between 6 and 8 pounds.

Some species, such as the great horned owl, have tufts of feathers on either side of the tops of their heads, resembling ears or horns. It is thought that these help the owl camouflage itself when hunting prey.

Owls’ eyes are large and round, ranging in color from yellow to orange to dark brown or black. Lighter eyes tend to exist in species that are more active during daylight hours. In contrast, darker eyes help to better camouflage nocturnal birds.

An owl’s color varies from species to species, though many are some variations of mottled grey or brown.

Aptly-named snowy owls are mostly white, with some black speckling. Eastern screech owls can be either dappled gray or bright, reddish-brown.

The sub-tropical black and white owl is a deep, sooty black everywhere except its belly, which is striped with stark white.

Owls are mostly solitary birds, except during mating season when a mating pair is virtually inseparable.

The male owl uses courtship displays to win the female’s attention, after which the couple finds a nest in which to raise their young. The female spends most of her time in the nest, incubating the eggs and caring for her chicks.

Males hunt for food and brings it back to the nest for their mate and babies. Females generally take charge of feeding the chicks, tearing up the prey into small enough pieces for them to manage.

Owls typically mate for life, and a mating pair will return to each other year after year. While most owls spend the rest of the year alone, a very few species, such as the long-eared owl, prefer to live together in groups of up to 20 individuals.

It seems that they form social bonds during their time together, as members of the same social group will usually choose each other to mate with when the time comes.

In this section, we are going to cover some of the most common questions about female owls.

What are the Differences Between Male and Female Owls?

Unlike many other species, female owls are actually larger than males. It isn’t clear why this is, and there are several different theories on the subject.

The size difference could be because, in some species, the females stay in the nest with their chicks/eggs while the males go out to hunt. A larger bird could probably survive for more extended periods without food and would be better able to tear apart prey to feed her young.

Males may also benefit from being lighter and more agile while hunting, helping them catch prey.

In many species, male owls tend to be lighter in coloration than females. Male snowy owls, for example, are often totally white, whereas females may have conspicuous black speckling.

Yes, female owls hoot, like males, and for the most part, sound similar. Owls make sounds for a number of reasons, including territorial calls, warning growls, and affectionate sounds between companions.

During mating season, males tend to be much more vocal, both to guard their territory against other males and attract females.

Males call out to females using a specific call, and interested females respond using a different one.

As owls tend to live alone most of the year, females have to hunt to feed themselves, just like males. However, for many species, a change happens during the breeding season.

Once a breeding pair has nested, the female rarely leaves the nest until her chicks are old enough to fend for themselves.

During this time, the male hunts for her, providing food for both her and his babies.

And there you have it – a female owl is called a hen.

Did you already know but weren’t entirely sure? Either way, I hope this article was interesting and informative.

At the very least, next time when you play an animal quiz with your friends, you may know a thing or two about owls.

Thank you for reading. If you liked this post, here’s a recommendation of another similar article: What is a female goose called?