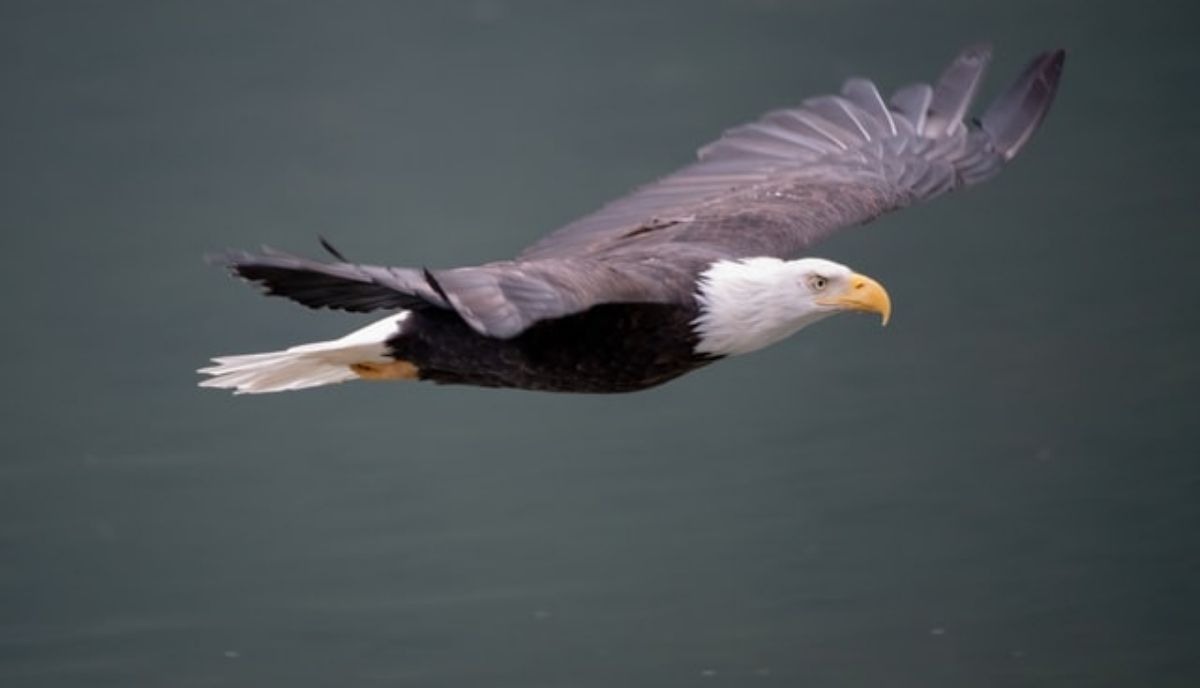 Every nature enthusiast has heard or read about the majestic eagles. But have you ever wondered which is the fastest eagle on our planet?

By reaching a maximum speed of 199 mph, the golden eagle is the world’s fastest eagle. Golden eagles are ranked the third-fastest bird globally after peregrine and saker falcons.

However, that’s not all. This article will go through the five fastest eagles and share some exciting facts about these fantastic flying predators! 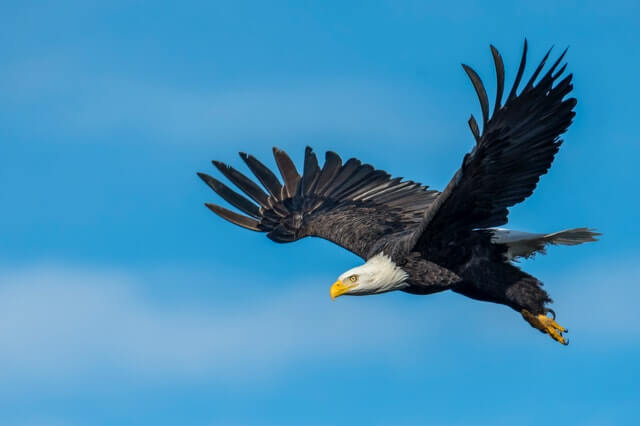 Bald eagles, contrary to their names, are not bald. Instead, they have beautiful white features around their heads, making them quite striking.

Their bodies are covered in brown feathers befitting their mighty looks.

Bald eagles can reach up to about 43 inches (110 cm) in length and have a wingspan up to about 7.5 feet (2.2 meters). Interestingly, these eagle species can live up to the fantastic thirty years.

The maximum speed of the bald eagle is up to 100 mph but is reachable only when it springs down towards its prey. On a typical day, when they fly flat, the average speed of bald eagles is about 28 to 31 mph.

As the USA symbols, you can assume that the bald eagles’ primary habitat is in North America.

They are types of eagles that primarily hunt fish. However, they will feed on other birds and small mammals when the opportunity arises.

When they are in hunting mode, golden eagles soar from high range, utilizing their impressive eyesight to spot potential prey. Once the target is located, they swoop down on it with high speed inflicting the grip of death with their powerful talons.

The squeeze of the golden eagle talons is around 750 psi, 100 psi higher than the lion’s bite force!

Crowned eagles are natives of Sub-Saharan Africa. Their preferred habitat is in the woodlands, where they can find their preferred prey.

Arguably it is among the most beautiful eagles on the planet. They have a dark brown feathering over the head, forming a crown-like image, hence the name.

In addition, crowned eagles have creamy feathers on their chest, red, and a mix of dark brown to black feathers, forming a beautiful pattern. The same goes over their wings, too, dark brown on top and reddish on the lower part.

Crowned eagles can reach an incredible 100 mph when swooping towards their prey from the sky. Their flight speed averages 19 to 31 mph when they soar, depending on the currents and the winds.

An exciting but gruesome fact about crowned eagles is that they are extremely dangerous and may prey on humans in rare cases. It is not often, but there have been cases where these eagles have been spotted attacking children. 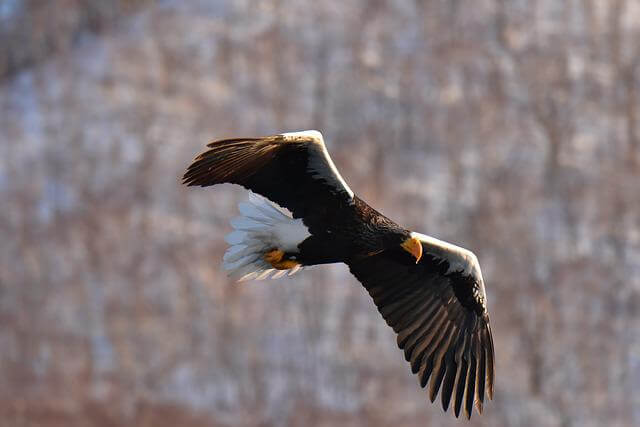 The Steller’s sea eagle is one of the most easily recognizable eagles. It has a dark brown plumage over almost all of its body, with white feathers only on the forehead, upper wings, and tail.

The beak and feet are bright yellows, and you cannot overlook their enormous size! They are the heaviest eagles on the planet!

Steller’s sea eagles fly at an average speed of about 28 mph when they soar in the sky, searching for prey. Once they spot some, they dive for it and reach up to 140 mph!

Native to the North-East Asian coast, Steller’s sea eagles tend to prey on fish like salmon or trout but will not be picky if they can quickly snatch up a fast dinner.

Instead, it would eat anything, be it dead or alive, as long as it is rich in proteins, just like a natural bodybuilder.

Interestingly, Steller’s sea eagles have binocular vision. That means that the bird’s eyes are set on the front of its head.

This way, it will focus on its target and almost never miss! 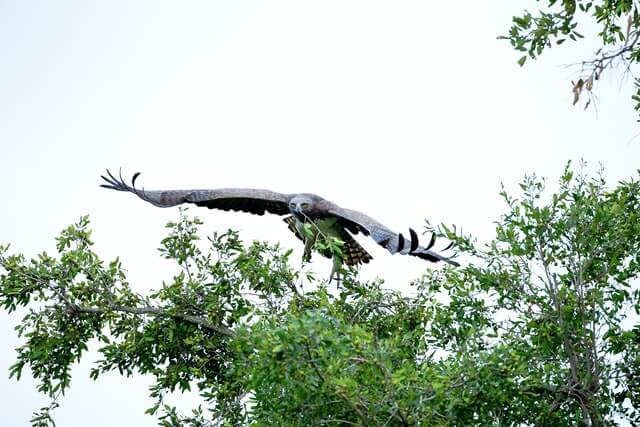 Martial eagles are the largest eagle species in Africa. They have dark brown to sometimes greyish feathering over their heads in addition to white color on their torso.

Labeled as the biggest in the oldest continent, eagles can reach over 30 inches.

Martial eagles are the second-fastest eagles, with a maximum flight speed of 143 mph. The average flight rate when they soar over the hot air currents of Africa is about 31 mph, but they can fly as fast as 37 mph.

Like every eagle species, they do not fly nonstop at 143 mph speed; but only when swooping down on running prey like a rabbit or other small animal.

These birds of prey carry the Roman God of War name and can easily break a human arm.

An interesting fact about martial eagles is that they are known as ‘the leopard of the sky.’ The reason behind the nickname comes from the fact that martial eagles are considered one of the deadliest and most ferocious avian predators on the planet.

Related: How Dangerous Are Eagles to Humans? 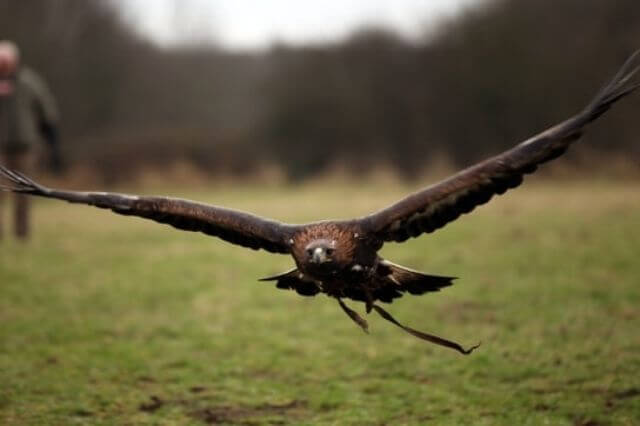 The golden eagle is a large avian predator found in the Northern hemisphere. It has a huge wingspan and is the fastest eagle worldwide. Its body reaches about 29 to 35 inches (75 to 90 cm) and, for the larger females, up to 39 inches (100 cm).

If you want to identify this majestic bird, look for dark brown feathers with a golden trait around its head and shoulders.

The golden eagle reaches its maximum flight speed (190 mph) mainly when hunting and swooping toward the ground to prey on rabbits and other animals. When it relies on the air currents, it usually keeps a pace of about 31 mph.

An interesting fact about these raptors is that they have big nests reaching up to a few meters. On top of that, both parents share the duty to feed the young birds.

The male usually hunts the prey, and the female eagle feeds the younglings.

Assuming you have read everything, you know about the top 5 fastest eagles on Earth. How do they look, their basic description, and their maximum flight speed.

Considering all the information from above, the fastest eagle species on the planet is the golden eagle. It can reach a flight speed of up to an astonishing 199 mph!

Thank you for reading. If you liked this post, here’s another popular eagle article: Strongest Eagles on the Planet.