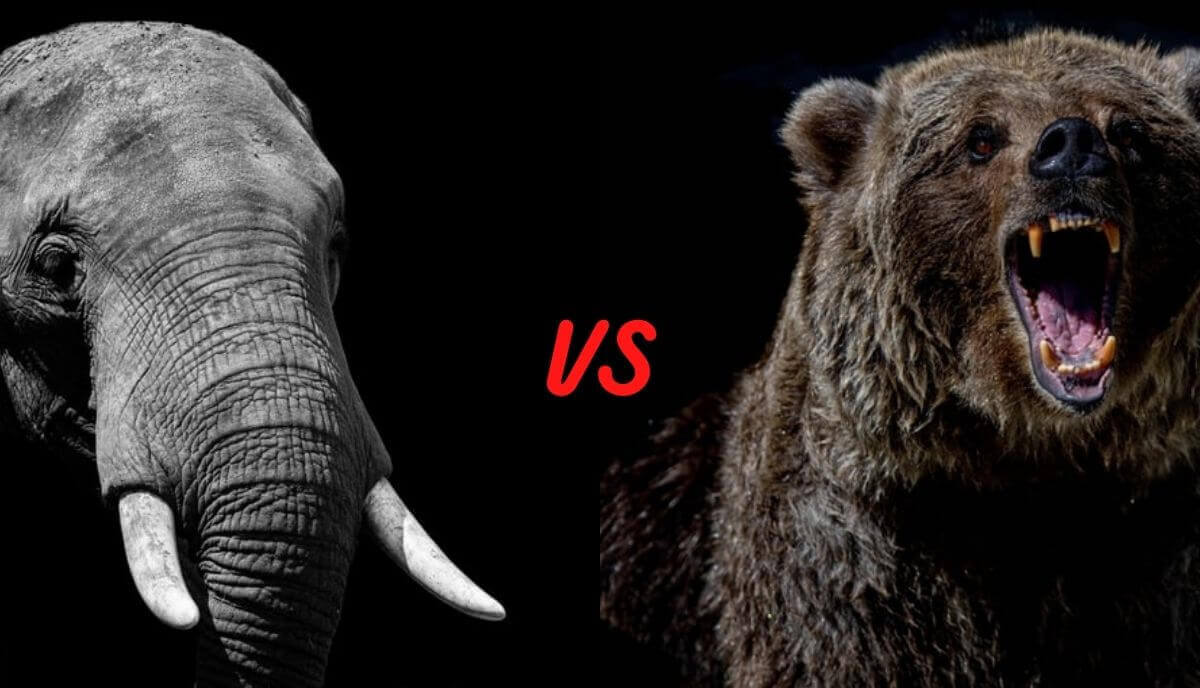 We, humans, always enjoyed comparing physical abilities and possible fight outcomes between different animal species. Elephant vs bear is one such example.

Who is more vicious, who possesses more strength, and who would win in a potential brawl?

Before we get started, I want to stress out that bears and elephants live in different habitats, so this fight is purely based on prediction according to their physical characteristics.

Let’s find out who would win in a fight between elephant vs bear.

Let’s Get To Know The Two Opponents

Elephants display a range of varied behaviors that vary depending on the elephant species. However, generally, they are social animals living in small groups known as breeding herds. The herds range from a small group of two elephants to a large one comprising more than 24 elephants.

The male elephants, also known as bulls, live a combination of social and solitary life. The bulls spend most of their time with matriarch groups, but when they attain the age of around 12-15 years, they spend 50% of their time alone.

The elephants are generally peaceful; however, they become very aggressive when they are in musth.

Musth is a condition associated with sexual excitement, followed by high levels of testosterone which results in aggression and unpredictable behavior.

The bulls are by far the most dangerous while in this high-energy periodic condition. 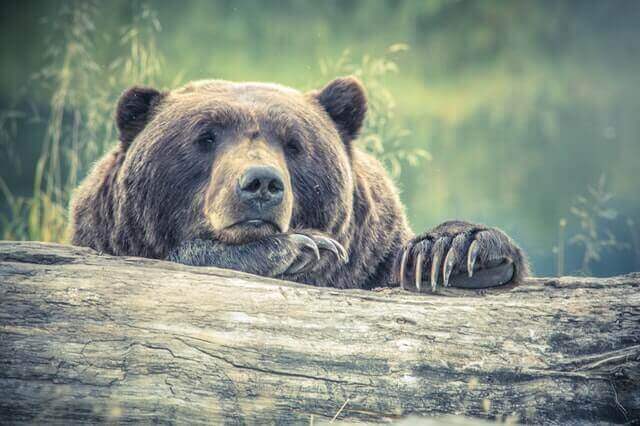 On the other hand, the bears are typically solitary. Except for small groups that usually consist of mothers and cubs or groups that come together during mating seasons.

The bears are also generally shy and non-aggressive. Although, behavior can vary between the species. Polar bears can be quite aggressive and dangerous, while pandas are peaceful and not threatening creatures.

Bears tend to live a solitary lifestyle, but they usually tolerate each other whenever there is plenty of food within their home range. You are also likely to spot bears in groups during mating seasons.

Aggressive behavior is mainly related to self-defense. For example when cornered, or their cubs are in danger, bears can be extremely dangerous and aggressive.

Bears are extremely intelligent animals. I bet you have seen them perform complex tasks in viral video skits that circulate the internet.

A sign of their amazing cognitive abilities includes their ability to learn and process information enabling them to perform tasks such as playing sports, roller skating, and even balancing on walls.

In fact, bears are considered to be one of the smartest land animals in North America. Zookeepers and animal trainers claim that bears have higher cognitive abilities than dogs. 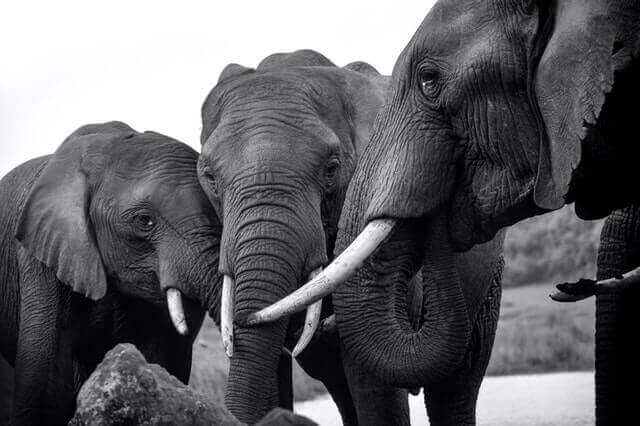 Elephants are outstandingly intelligent animals. Their intelligence, the ability to learn and adapt to new situations can be attributed to their social nature. It is from these groups that they get to learn social skills.

Some of the outstanding examples that demonstrate their high cognition abilities include:

Did you know that the term elephant is a derivation of the Latin word ‘phant’ which means huge?.

Bears can vary in size, depending on the species. But even the largest, the Kodiak bear, is tiny when compared to an elephant.

How strong are elephants vs bears? Comparing bears to elephants on the strength we will be doing the bears injustice because elephants are not just massive impressive beasts but equally strong.

In fact, elephants are the strongest land animals in the world.

Elephants can carry up to 14,000 lbs (7 tons ) in weight which translates to 130 adult humans. Isn’t that massive strength? 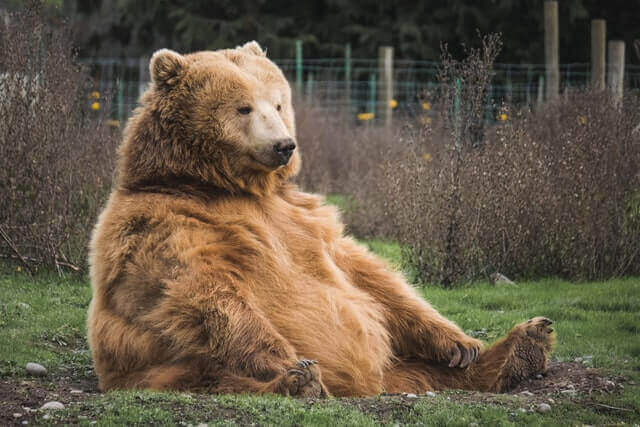 Bears are strong animals but not compared to elephants. For instance, of the 7 tons those elephants carry, bears can lift 1100 lbs (500 kg) which is an equivalent of 0.8 times their body weight.

As a result, when it comes to pure strength, elephants come out as winners!

Elephants can run at a top average speed of 15.53 mph (25 km/h) and while they are usually in constant movement, research has established that most of them cover at least 15,5 miles (25 km) a day with the longest distance traveled standing at 124 miles (200 km) a day!

It is contested whether elephants actually run because their massive body mass cannot allow them to do the actual ‘running’. They can only increase their speed for a short distance and they can only maintain a slower pace for about a mile.

On the contrary, bears can run top speeds of 29.83 mph (48 km/h). Interestingly, unlike elephants, bears are predictor animals. They have strong legs that can help them run top speeds over long distances.

For instance, they can maintain their top speeds over two miles of running. On speed and endurance, bears beat elephants by far!

You May Also Like: Hippo vs Tiger Who Would Win 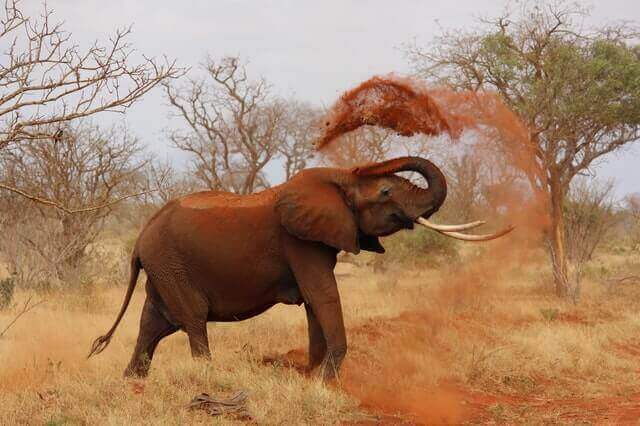 Elephants react to threats and defend themselves in a number of ways. The most common method is usually a mock charge that involves running towards the threat which is broken off before reaching the target.

These mock runs are essentially meant to scare off the adversary but if the attack is followed through, Elephants are capable of causing unprecedented damage, injuries, and death.

When defending themselves just like elephants, bears make themselves look large and fluffy. The bears have claws in their pawns, strong jaws, and feline teeth to launch just in case they need to defend themselves or launch an attack.

Elephant vs Bear – Who Would Win?

All factors at play in a fight between a bear and an elephant are next to impossible. As I’ve mentioned bears are naturally found in the northern hemispheres while elephants live in the savanna and woodlands in the southern hemisphere.

The chances of the two coming to meet are limited.

However, in case of a fight, an elephant would most definitely win. Even the largest bear species is almost three times lighter and twice as smaller than an elephant. Because of the enormous size and strength of an elephant, a bear would not stand a chance.

Additionally, elephants enjoy the advantage of staying in groups and enjoy group security. No bear will want to launch an attack on an elephant whether a calf or an adult elephant because it will definitely lose.