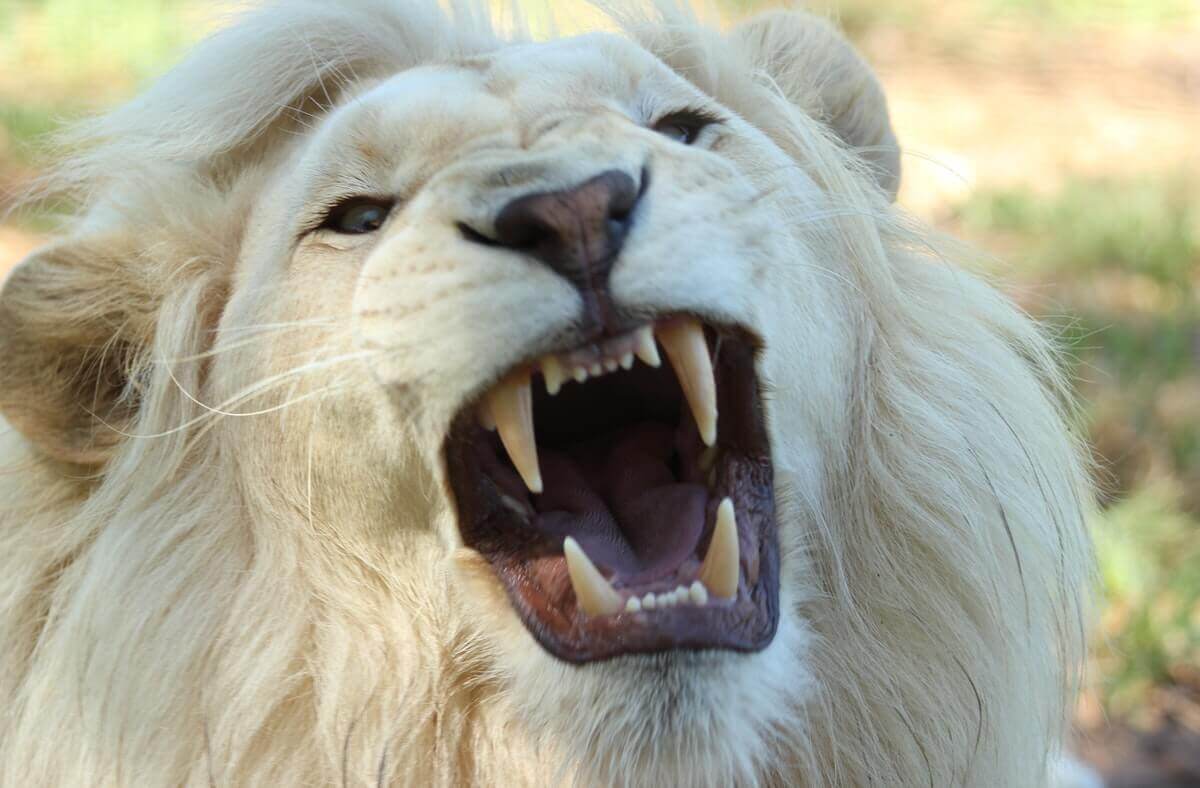 A meow is one of the most common cats vocalizations with various meanings. But what about big cats? Do big cats (lions, tigers, leopards, and jaguars) meow?

No, big cats don’t meow. The reason lions, tigers, leopards, and jaguars can’t meow is that they have a different bone structure in their throats than domestic cats. Big cats have a hyoid bone that is connected with an elastic ligament, which enables them to produce a roar but makes them unable to meow or purr.

Despite being unable to meow, big cats in the wild make a broad spectrum of unique sounds. If you are interested in learning the meaning of these sounds, keep reading!

A different ligament structure within the hyoid is the key factor that makes the difference in vocal abilities among cats. Let’s start by explaining what the hyoid is first.

The hyoid is a bone that is situated in the neck of the animal and holds the tongue and the larynx.

A stretchable ligament allows more air to pass through vocal cords. As a result, big cats are able to produce deeper and more resonant sounds, but at the same time, it disables them to produce meowing and purring sounds.

On the other side, domestic cats have ossified hyoids which give them the ability to purr and meow but not to roar.

Even though big cats do not have the ability to meow, they are quite talkative creatures and can produce a wide range of sounds.

Let’s see what sounds do big cats make and what they mean.

What Sounds Do Lions Make?

Let’s be honest, every time we see lions in zoos, we get chills all over our bodies. The kings of the jungles have no natural predators and are a true masterpiece of nature.

Lions are kinds of animals that use a wide variety of sounds for communication with each other. The most frequent sounds that lions produce are roars, grunts, puffs, and hums.

Famously known for roaring, lions have the loudest roar of all big cats. The sound of a roar can be as loud as 114 decibels and it can travel up to 5 miles away. Pretty crazy!

The lion’s roar is the most important part of their communication. It has several meanings, both for pride members and for potential intruders.

If you are more interested in the lion’s roar, I wrote a dedicated article on that topic that you can read here.

Besides roaring, the most common sound that lions make is low-pitched grunts. What’s interesting is that some Safari guides have learned to imitate these grunting sounds in order to “communicate” with lions.

The lion’s grunts are most similar to a domestic cat’s meows. However, it is much louder than meowing and is usually used as a way of everyday communication between the family members.

Puffs and hums are sounds that lions make when they are happy, playful. These sounds are low volume and can be heard regularly among the pride members.

In the lion’s world, humming represents pleasure and affectionate emotions. Puffing is a way of greeting when the lions approach one another, followed by head rubbing and mutual licking.

Moaning is another noise that lions make. The lionesses often moan as a way of communication with their cubs. For example, when a mother encourages her cubs to try new things.

But not only lionesses moan. Male lions use moan sounds during the courting process in order to make lionesses feel calm.

What Sounds Do Tigers Make?

TIgers use a variety of vocalizations and sounds to communicate or to warn other animals in their habitat. The most common sounds tigers make are roars, snorts, and hisses, chuffs, moans, and imitating calls.

Although many people, when they hear the word roar, they instantly think of lions. However, the tiger’s roar is actually even more fascinating.

Besides alerting other tigers about the territory, and mating calls, a tiger’s roar has the power to paralyze. Yes, you’ve read it well.

According to the Science Daily, when making roar sounds, tigers use low-pitched sounds below 20 hertz, also known as ”infrasounds”.

The study further explains that the combination of the loudness of the tiger’s roar and its low frequency (18 hertz) is what makes the animals and even human trainers paralyzed.

By imitating the calls of other animals, tigers lure their prey into the trap. One example is the bear.

Tigers would draw a bear’s attention by mimicking the sounds of its prey. Once the bear was close enough, a tiger would attack it from the ambush.

Bearing in mind that they will attack the bear shows how strong tigers actually are.

When feeling threatened or fearful, or upset about something, a tiger would hiss in the same way as a domestic cat would.

Hissing sounds are a normal way of cats displaying fear and not aggression.

Tiger chuff is a sound also referred to as prusten. It is a low-intensity vocalization that the animal produces by blowing the air through its nostrils.

Prusten is a non-threatening vocalization that is used as a greeting between tigers or when a mother is comforting her juveniles.

A tiger will moan when stressed. The tiger’s moan sound is most similar to the roar sounds.

However, the roar is much louder and with exposed teeth. While moaning, the tiger’s mouth is usually closed.

The sound of the tiger’s moan can be heard 1,300 ft. as opposed to roar, the sound that can travel 1,9 miles away.

What Sounds Do Leopards Make?

Leopards have a wide range of vocalizations and sounds, including roar, growl, hiss. However, they are elusive animals who tend to stay silent.

A long sawing roar is the most legendary sound leopards make. A roar can last for a minute, and it sounds similar to someone sawing wood.

A tiger would usually roar when defining the territory or when alarmed.

When you hear a leopard growling, you know it’s angry. A leopard would usually growl in order to express territorial aggression and warn off other animals.

Like domestic cats, when frightened, leopards would make hiss sounds. Even though it sounds like aggressive vocalization, hissing can be heard when the animal is fearful.

What Sounds Do Jaguars Make?

Jaguars, unlike other big cats, produce fewer sounds for communication. Some of the most common sounds that jaguars make are roars, grunts, and chuffs.

A jaguar would roar and grunt in order to warn other jaguars about the territory and mating competitors.

However, the roar is also used by both male and female jaguars, which helps bring them together for mating purposes.

Jaguar chuff (prusten) is a sound that can be heard among jaguars in friendly situations.

The main reason big cats, including lions, tigers, jaguars, and leopards cannot meow is that they, unlike domestic cats, have an elastic ligament structure that connects the hyoid bone. Elastic ligaments allow more air to pass into vocal cords, disabling big cats to produce meow sound.