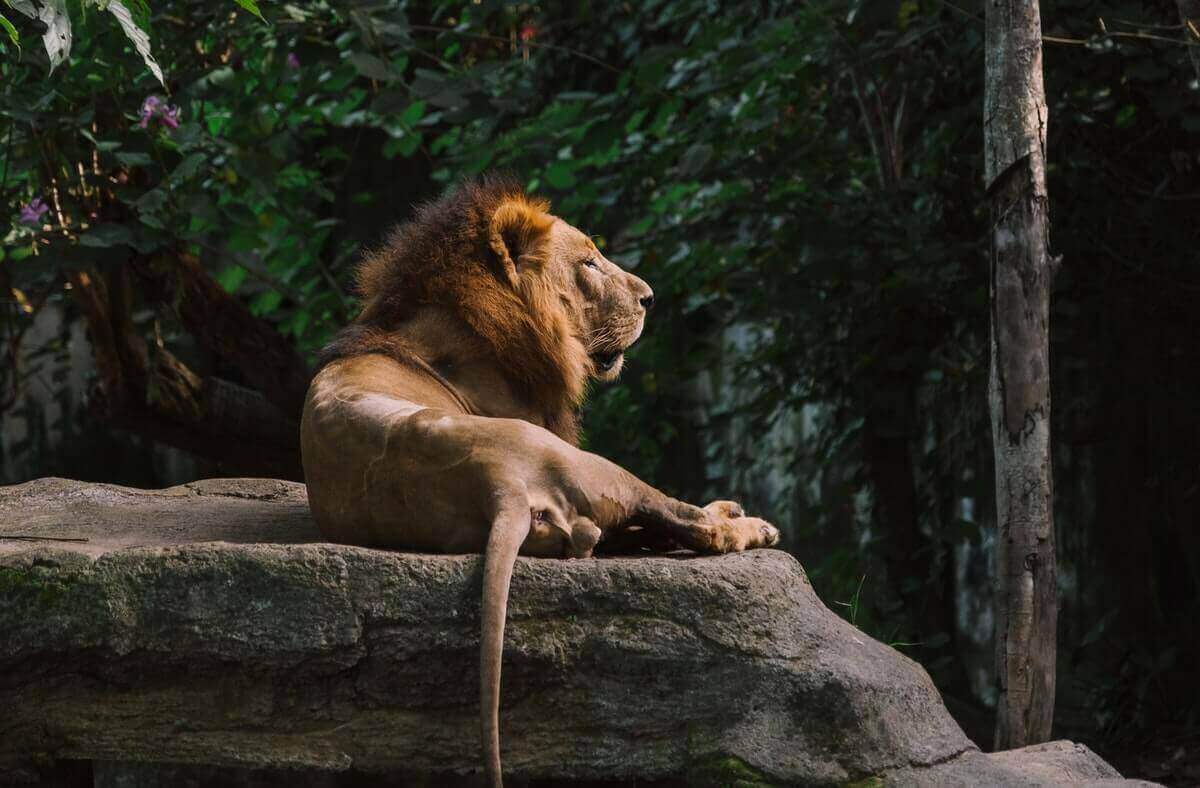 Do lions live in the jungle is a natural question to come up, especially if you’ve been hearing the phrase “Lions are the king of the jungle” for as long as you can remember. In this article, I’m going to answer your in a plain “yes” or “no”, and I’m going to give my answer with some backing based on my research.

No, lions do not live in the jungle. Although they are referred to as kings of the jungles, lions actually don’t live in jungles. Lions live in the Sub-Saharan part of Africa, including savanna, grassland, and open woodland. Lions are pursuit animals, and hunting in a jungle that is covered with heavy vegetation would make it difficult to catch prey.

Why Are Lions Called The King of The Jungle?

The phrase, “The lion is the king of the jungle” is more figurative than literal. A jungle is a synonym for the tropical rainforest.

Although, the jungle is characterized by overgrown vegetation and a variety of dangerous wildlife, where there is an intense fight and struggle for survival.

So figuratively, the word jungle symbolizes the rough wild, and lions are crowned king because of the following reasons:

Lions are not called kings because of their size or weight. Compared to most animals in the wild, including their prey, lions are relatively smaller in size. But one thing makes them stand out.

In the wild, it is usually the survival of the fittest. Other animals may shy away from taking a big risk, such as going after a giraffe or an elephant, even if they were starving.

Yet, the lion isn’t a respecter of size or number. They can take down the fiery hippo as long as they need food to feed the pride.

Lions aren’t the only predators in the wild, so there is an intense struggle for food and kill. Although the competition can be rough, no animal in the wild hunts lions as their prey.

However, in order to eliminate competition, lionesses go as far as climbing trees to hunt down cubs of other predators like the cheetah or leopard.

They also ward off other lions who are not part of their pride that come off as a threat to their position in the pride.

By ruling their environment, lions sit at the very top of the food chain. Consequently, they have earned the title of apex predator of Africa.

In other words, no animal poss an actual threat to the kings of the jungles (except for the humans).

Not only do they have no threat of other animals, instead lions kill leopards, hyenas, cheetahs, and other predators every time they get a chance merely as a way of displaying their dominance.

Lions are one of the most iconic animals in the whole animal kingdom. They represent symbols of courage and strength that originated from ancient times.

However, lions are a very diverse symbol. Besides courage and strength, lions represent majesty, justice, and leadership.

Admired in all kinds of forms of art, from painting and poetry to movies and theaters.

Where do Lions live?

Lions live in habitats where they can easily blend with their surroundings. They are social animals, so they do everything in groups like hunting.

And to hunt in groups, they require space to lay a successful ambush, which the jungle does not provide with all the tangled and overgrown vegetation.

So which terrestrial habitat best fits the lion’s spec for survival?

A grassland is a terrestrial habitat that is characterized by a stretch of endless grass population, little rain, sparse trees, and herds of herbivores, which are lions’ natural prey.

The grassland has all the requirements that lions need to survive. Little or no trees for effective hunting, an abundance of grass that serves as food for their natural prey, a source of water for drinking, and trees that they could climb if they want to get a feel of the breeze or be away from flies.

Savanna is usually a flat area of land populated by mostly grass and sparsely by trees that do not form canopies. In the savannah, there is plenty of sunlight and when it’s nighttime, it is cool.

Lions prefer to hunt at night to cool as they break into sudden pursuit and settle down later to consume their kill.

Also, the lion’s natural prey are usually animals that move in herds and it is unusual for the giant hoofed animals or the cape buffalo to travel through areas that have tangled vegetation with almost no grass in sight.

The savannah is also populated by brown grass, providing good camouflage for lions to successfully hunt down their prey. Hence the reason lions choose savannahs as their favorable dwelling place.

Open woodlands are actually just another name for a forest. The name “Open woodland” is used in order to illustrate a forest with an open canopy.

Open woodlands are habitats in which trees are not close together. Although it comprises a bit more shade compared to savanna, there is much less shade than a true forest.

Often, woodlands are positioned in between different ecosystems. In many places in Africa, woodlands represent transition zones between deserts, true forests, and grasslands.

This habitat is home to a wide variety of mammal populations. Especially for the large mammals, which often serve as perfect prey for hungry big cats.

Conclusion – Do Lions Live in the Jungle?

In summary, lions do not live in the jungle, despite the famous nickname ‘the king of the jungle’. Lions used to be live in Europe and Asia, but their habitat has shrunk 94%, and now they can only be found in grasslands, savannas, and open woodlands of sub-Saharan parts of Africa.

However, whether lions live in the jungle or not, the reasons stated above are enough to qualify them as the king of wildlife. Figuratively, in the jungle where there is so much danger and competition to survive, lions are at the top of their game; They are the rulers of their environment and the real kings of the danger!

Read Also: Where Do Lions Sleep?