Most of us learned a lot about lions and hyenas by watching The Lion King when we were young. In my case, I was immediately interested in these animal characters. I naturally started researching about them.

But as I learned more about them, I started asking questions. Are lions and hyenas mutual enemies? Are they friends? Or, does everything The Lion King had taught me fiction?

Eventually, I reach a point where I ask – do lions eat hyenas?

No, lions do not eat hyenas. Lions prefer to hunt and eat herbivores as they have more nutritious and fattier meat. The hyena’s meat is less appetizing for the lion because of their bad diet. In addition, hyenas like lions are also considered apex predators, meaning it is not easy to hunt another skilled predator.

There is no exact reason why lions do not eat hyenas. However, here are some theories as to why:

Hyenas Are Not “Tasty and Healthy Meals.”

Lions are carnivores, meaning herbivores are the main part of their diet. Moreover, herbivores have nutritious meat. This can’t be said to a hyena.

Hyenas have a terrible diet, mainly scavenging for animal carcasses. Any excess scavenged meat will be stored in a watering hole to be eaten later. Hyenas can basically eat anything, even if it is rotting flesh.

Although they rely on scavenging, Hyenas hunt for herbivores too. They usually move as a pack, similar to lionesses.

There are rare instances where hyenas change their diet. Still, most of the time, hyenas will go for a carrion every chance they have. Due to this, hyenas’ meat is unsatiable for lions.

Herbivores Are Easier to Hunt

Although herbivores such as antelopes and zebras are fast runners, they do not put up a fight like hyenas. Since herbivores have innate flight instincts, lions find it easier to take them down.

In contrast, hyenas act as a group to protect themselves. They are aware that they have no chance of fighting against larger animals when acting alone.

At the same time, it is too risky for them to stray away from the pack.

Hyenas forming a pack is not only to protect themselves. They also use their number to tackle large prey like wildebeest. It takes at least six hyenas to take over this herbivore.

The number of hyenas required doubles during feeding time. 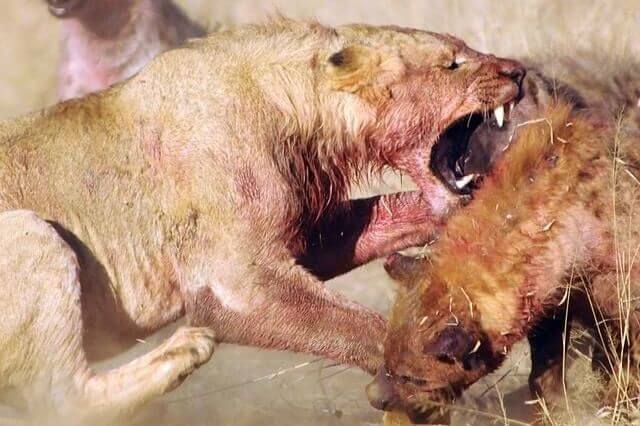 Yes! Lions kill hyenas as they deem them as pests in their territory. In addition, lions will kill hyenas to reduce competition since the two species are apex predators that compete for food. Lions will also kill hyena cubs given the opportunity, which is the way they display dominance.

Although they eliminate hyenas, lions do not eat them. However, an old or weak lion may attack and eat a hyena.

This rare instance occurs during food scarcity. However, hyenas will eat a dead lion if the opportunity arises.

To understand the relationship between the two animals, here are a few reasons why they kill each other:

Lions kill hyenas for the pride’s safety. Both animals compete for food. To lessen competition, they ensure to eliminate the other.

Hyenas and lions are also territorial in nature. So, it is no surprise that hyenas actively seek to kill lion cubs. It was so often that lions started attacking the hyenas.

Sadly, lion clubs are not only the hyenas’ targets. Hyenas also act aggressively towards lionesses. When a pack of hyenas spotted an outnumbered team of lionesses, they immediately attacked the latter.

Lionesses are hunters of their pride, making them hyenas target to lessen competition over prey.

Interestingly, it will require 10 hyenas to take over one lioness. Such an attack only happens when a lioness strays too long away from the pride.

Generally, hyenas are hunted but not eaten. Although lions attack hyenas, they do not eat them. Such attack rooted mainly due to territorial reasons.

But, when push comes to shove, here are some animals who will kill and eat a hyena:

Nile crocodiles are one of the most dangerous apex predators in the sub-Sahara. They eat anything that crosses their path, such as fishes, zebra, birds, and hyenas.

Although not their natural prey, Nile crocodiles will take an opportunity to drag a lone hyena. With its massive and strong jaws, the crocodile already seals the fate of the unfortunate hyena.

African rock phyton was also spotted to actively attack hyenas. They ambush a stray hyena by concealing themselves in their surroundings.

The phyton suffocates its victim by constricting it. Using momentum, it throws coils to its prey. The phyton then slowly squeezes the victim’s body as the latter exhales.

It only takes a few minutes before a hyena dies of suffocation or cardiac arrest. The phyton will proceed to swallow its prey.

Another big cat that was documented to attack a hyena is a leopard. However, similar to lions, leopard hunting and eating a hyena is a rare occurrence.

Related: Do Lions Eat Each Other?

In this section, we are going to answer some additional related questions on lions and hyenas.

Why Do Lions Hate Hyenas?

Lions hate hyenas because the two animals are mortal enemies and the main food competitors. Both species will do everything to eliminate each other. And because of mutual hatred, lions actively kill hyena cubs and vice versa.

Hyenas will also try to attack a lone lioness. In return, lions will kill any stray hyenas.

Both predators are also territorial. They constantly compete to get the best prey for their pack and pride.

To understand the predators’ competition for territory, let’s further discuss it.

Lions and hyenas are sensitive to their territories. These territories will inevitably overlap. However, it is the lions who decide the site selection in hyenas.

A 2016 study published by Leibniz Institute for Zoo and Wildlife Research showed that lions and hyenas simultaneously use overlapping territories. Although considered as natural enemies, it appeared that both animals use one another.

This dynamic happens because one thrives on scavenging. While the other steals away the prey.

It is a misconception that hyenas are lazy. It was shown that lions would steal hyenas’ hunt.

Are Hyenas Afraid of Lions?

Hyenas are afraid of lions because the latter are larger and stronger. It will take a pack of hyenas to eliminate one lion. Just like other animals, hyenas’ main priority is their safety. A lion can easily kill a hyena with one swipe. Although hyenas are keen to attack a lioness.

A lion is evidently more powerful than a lioness. It is expected from the lion as the protector of the pride. Being territorial, lions will take down any aggressive hyenas lurking in his path.

A lioness, on the other hand, tries to tolerate hyenas. The latter is also cautious towards the feline. However, once they outnumber the lioness, hyenas may be determined to kill it.

Hyenas’ strongest asset against the lion is its number. When sufficiently numbered, hyenas may have a chance against the feline.

Are Lions and Hyenas Enemies?

Yes, lions and hyenas are considered natural enemies. These two animals are similar in a lot of ways, and because of these similarities, they often compete in the wild, which makes them enemies.

Lions and hyenas are territorial predators. Their hunting grounds overlap with each other. This led to a competition of who caught the prey first.

These predators are also cautious with each other. One of them can easily attack the other unknowingly.

As mentioned, both predators attack each other’s young. Hyenas actively hunt for lion cubs. While lions will kill a hyena cub, which they found in a communal den.

Though, it was shown that even female hyenas will eliminate their clan’s cubs. It was thought that infanticide was used to preserve the female hyena’s standing.

However, lions and hyenas are not always on bad terms. It was shown that they thrive together.

In a way, hyenas can benefit from the lion’s hunt. Any animal carcasses left can be eaten by hyenas.

Wrap Up – Do Lions Eat Hyenas?

In summary, lions do not eat hyenas. They kill them, but without the intention of consuming them. The lion’s favorite food includes medium to large herbivores such as wildebeest, antelopes, and zebras. We can say that lions are also conscious of their diet.

To be fair, if there is far tastier and healthier meat available, why settle for less? While a hyena will be happy to have a quick bite of a deceased lion. It sure shows the hyenas are no picky eaters.

Thank you for reading. Here is a recommendation of another popular post: Do Lions Eat Crocodiles?