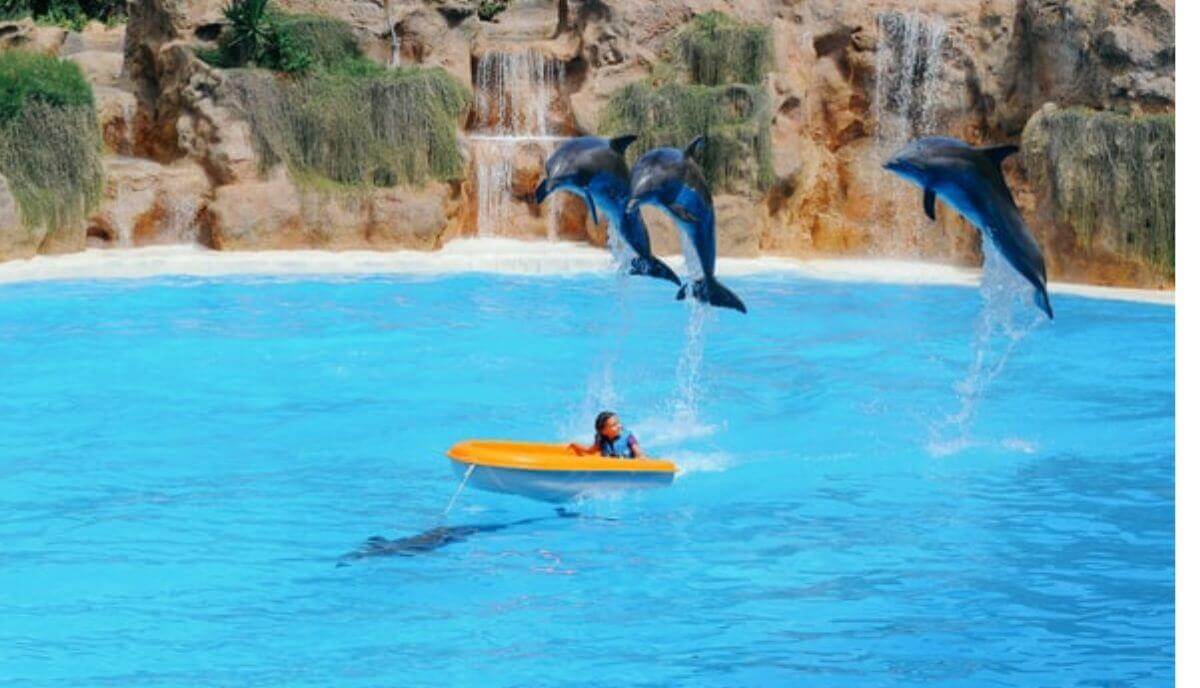 Dolphins are incredibly unique creatures. These aquatic mammals come in a variety of species. They are loved by many due to their intelligence and friendly nature.

Still, these features don’t always translate to being tame, which often begs the question, do dolphins attack humans?

Yes, there have been several reports of dolphin attacks on humans in the wild and in captivity. However, these attacks are sporadic, and most incidents happen after people previously harassed the animal. In most cases, people being attacked by dolphins end up with minor injuries.

In the rest of the article, we’ll share more insights about dolphin attacks on humans.

One of the most impressive features about dolphins is how many similarities they share with humans. They do not lay eggs, are warm-blooded, breathe through lungs instead of gills, and are recognized as mammals despite being entirely aquatic animals.

Dolphins have also been ranked among the top three most intelligent animals in the world, aside from humans, for a good reason. They are capable of social interaction, solving complex problems, and having a calm and cordial demeanor.

These qualities, along with others, have made dolphins very likable and viewed as approachable by humans. People aren’t usually frightened if they go swimming and see them; they’re more likely to be fascinated and pleased.

They have been trained to perform many stunts (especially acrobatics and play games), and even the U.S Navy Mammal Research program has studied these incredible creatures as well.

However, this doesn’t necessarily mean you should approach a wild dolphin – more on that below.

How Often Do Dolphins Attack Humans?

Although dolphins attacking humans is a rare phenomenon, there have been several instances in the past decade. However, there aren’t exact numbers of how many dolphin attacks on humans have been over the years, as it differs from place to place.

Still, some recent cases have shed light on just how gruesome the nature of a dolphin attack can be.

For instance, in 2013, a woman named Valerie Ryan went swimming off the coast of County Clare in Ireland, where a local dolphin named Dusty inhabited.

As soon as Valerie got into the water, Dusty became enraged. She noticed this, swimming towards the shore to evade the impending attack, but it was too late.

Dusty lunged her snout at Valerie, fracturing her spine, breaking her ribs, and damaging a lung. This was unusual behavior for Dusty, as hundreds of people have gone into the waters and interacted with her without having such a vicious encounter.

Either way, this traumatizing experience shows the savagery that dolphins often exhibit towards humans.

Yes, there are records of dolphins, especially lonely bottlenose males, becoming sexually aroused by the humans who come in contact with them. Many of these accounts have been validated by video footage, photographs and eyewitnesses, presented as evidence of the attempted mounting of scuba divers and researchers by dolphins.

In stark contrast to the indications of sexual aggression perpetuated by dolphins towards humans, a woman named Margaret Lowe reportedly had a bizarre sexual relationship with a dolphin named Peter during an experiment to teach dolphins how to mimic human speech.

After the experiment ended, Peter fell into “depression” and “committed suicide” by refusing to breathe.

And that’s not all. These aquatic creatures have a very dark side to them and aren’t as innocent as they seem.

Bottlenose dolphins, for instance, are known to form gangs of five to six with the aim of finding a female to mate with. The dolphins proceed to aggressively herd her, beat and bite her in a bid to coerce the female dolphin to mate with them.

They also practice infanticide, killing off the young of other male dolphins in a bid to hinder the passing on of their genes.

Dolphins have also been observed to maim porpoises for no apparent reason, torture their food before ingesting it, use pufferfish as a narcotic, and form homosexual relationships with one another.

Despite their friendly nature, dolphins are capable of murdering humans as they are complex hunters with incredibly sharp teeth and strong jaws. There have been several incidents in which dolphins caused injuries to people, such as fractures, skin abrasions, and on some rare occasions, even deaths.

In 1994, two men in Sao Paulo, Brazil, were rammed by a dolphin named Tiao, resulting in the unfortunate death of one of those men due to the internal injuries he sustained during the encounter. During the same year, Tiao attacked and injured many other swimmers, which earned him the nickname killer dolphin by the locals.

Eighteen years later, a dolphin at SeaWorld in Orlando, U.S, bit a young girl’s arm and attempted to drag her underwater.

In 2019, a ten-year-old British girl was the victim of a gruesome attack by two dolphins held captive, leaving her with several bitemarks, bruises, and cuts.

Although the last two instances, fortunately, didn’t result in deaths, they are testament to the viscous nature and mental anguish dolphins in captivity exhibit.

No, dolphins do not eat people. While they are prone to attack humans when agitated, they, however, do not eat people or any other mammal meat. Dolphins don’t consume humans as we are not on their diet list since they primarily feed on fish and other aquatic creatures.

The fact that humans don’t constitute part of their diet doesn’t mean they cannot eat humans, though. The opportunity just rarely presents itself.

What does constitute part of their diet are fishes, crustaceans, and squids. This, of course, varies depending on their geographic location.

Dolphins do not chew their food, shaking them in a bid to tear the carcass into smaller pieces they can gulp down.

Just like sharks that vary from solitary to sociable depending on the species, dolphins also tend to hunt alone or in groups up to the hundreds, called pods.

As a group, they use a hunting technique called “pinwheeling,” where they circle a whole school of fish, forcing them to swim together, then they take turns swimming through the school and feeding on as many fishes as they can during the process.

In this section, we are going to answer some of the most common questions regarding dolphins’ behavior.

Yes, dolphins bite. Head butting with their snout, flapping their tails, and biting with their teeth are their primary forms of defense. A wild dolphin (most especially solitary males) will resort to biting when they are angered, disturbed, or irritated.

These aquatic mammals have sharp, conical-shaped teeth whose numbers vary depending on the species. Compared to other species like the shark, their bite power is quite low but will still deliver enough damage to send anyone to the ER.

Is it Safe to Swim With Wild Dolphins?

Absolutely not. Swimming with wild dolphins poses various risks, ranging from those that can affect the swimmers to the ones that can affect the dolphins. Dolphins are wild animals and can often be unpredictable at times when it comes to their behavior.

Swimming with dolphins is very dangerous, as the swimmer is likely to get injured and badly wounded. For dolphins, human interaction can be a traumatizing experience.

It unsettles dolphins, and research has shown that dolphins who frequently interacted with humans experienced a decrease in their socialization and resting time. In addition, this presence can cause dolphins to become less weary of humans and other predators, increasing their vulnerability.

What to Do if a Dolphin Approaches You?

If a dolphin approaches you during a swim, the wisest decision is not to engage. Do not attempt to pet or let your curiosity get the best of you. Dolphins may look cute and playful, but they are still wild animals.

Try your best not to startle the dolphin by making any loud noise or showing fear; just slowly back away from the dolphin. If you happen to spot one, don’t go towards it, and if a dolphin begins to move away from you, do not pursue it.

In conclusion, dolphins are amicable and intelligent aquatic mammals; however, they can be very dangerous. Dolphins exhibit violent and sexually aggressive behavior towards members of their own species and others, such as porpoises and humans.

Dolphins have sharp teeth and physical properties capable of inflicting severe damage on whoever threatens them, both in captivity and especially in the wild.

Thank you for reading. If you liked this article, here’s another popular read: Will Vultures Attack Humans?