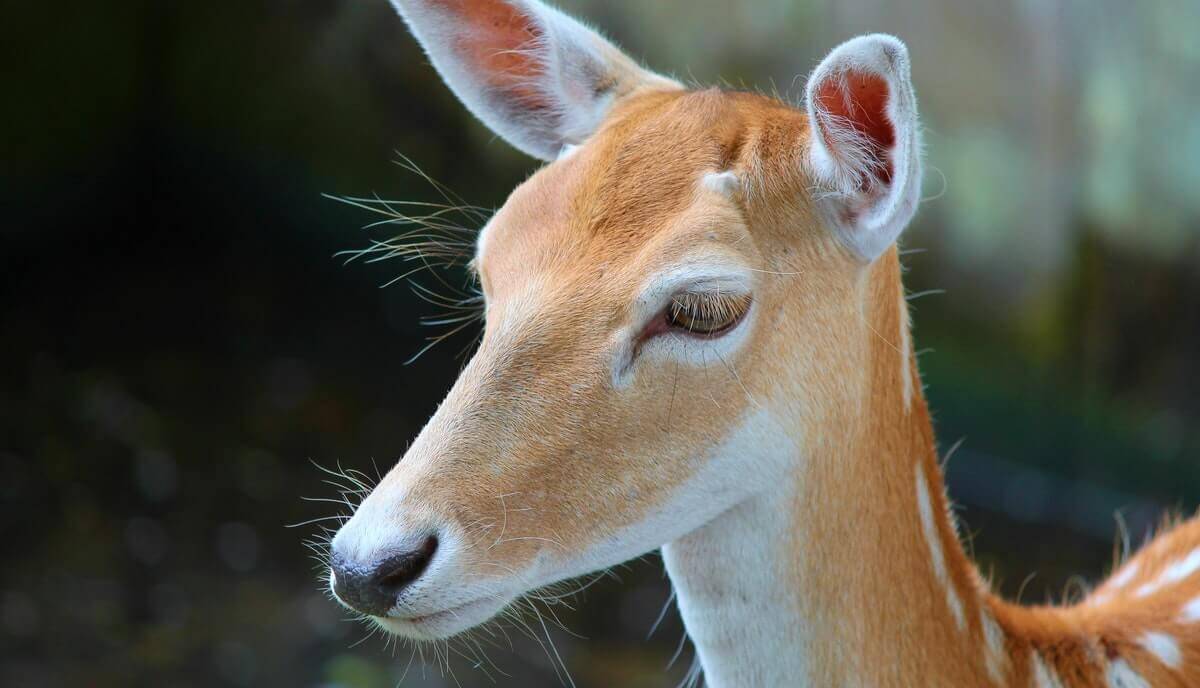 Deer have big, beautiful eyes that are often the first thing people notice about them. But do deer have eyelids?

In this blog post, we’ll discuss deer’s power of sight. Do deer even blink? Why do they sleep and die with their eyes open?

Do deer have eyelids?

The answer is yes. Deer have eyelids. However, deer have three eyelids, opposite to most mammals that have two. The third inner eyelid is also known as a nictitating membrane. It serves as additional protection for the deer’s eyes and keeps their eyes moist without them having to blink.

Yes, deer blink. But not as much as humans do.

Deer can go for a long time without blinking because of their extra eyelid. Which moistens an animal’s eyes while maintaining visibility.

A deer’s eye is made up of many parts that work together to help the animal see. The cornea and lens are transparent structures that refract light and focus it on the retina. Which contains photoreceptors called rods and cones.

The retina detects changes in light intensity, translating them into nerve impulses sent through the optic nerve to the brain for processing.

In North America, the white-tailed deer is the number one most hunted big game animal. Besides humans, deer are hunted by different animals.

Some of them include cougars, coyotes, and wild dogs. These hoofed mammals are constantly fighting for survival.

So another reason why deer blink less is that they need to adapt. Being prey in the wild is extremely hard.

Consequently, these animals needed to get the most out of their natural abilities to survive until the next day. Including less blinking.

Do deer sleep with their eyes open?

This is a question that I am often asked by someone who does not hunt. Deer enthusiasts and hunters know that you can tell when a deer is sleeping by looking at its eyes.

If the pupils are dilated, then it’s asleep; if they’re contracted, then it’s awake. However, this doesn’t mean that the animal isn’t resting or in alert in some way while its eyes are closed.

The deer would also sleep with their eyes closed. But not as often.

Generally, deer sleep very little. They do not have the comfort of sleeping 6 to 8 hours as we do. Most animals of prey are evolutionarily forced to adapt their sleeping habits.

So they have to be constantly in a state of awareness in order to survive. Deer usually sleep from 30 seconds to a few minutes. This is followed by a short alert period. According to deerassociation, a deer would repeat this process for about 30 minutes.

But even though they are asleep, the deer’s sense of smell and hearing are turned on.

Why do deer die with their eyes open?

Deer are one of the most intriguing and beautiful animals in North America. They have a tendency to die with their eyes open. But why does this happen?

The reason is simple when the animal dies, its brain dies with it. It takes active muscles to close or to open eyes. And when the brain shuts down, muscles in the body relax, and eyelids remain open.

This is in the case when the deer was conscious until the moment of death. On the other side, if the deer’s eyes were closed just before death, its eyes would remain closed.

We are all familiar with the phrase “deer in headlights” and how it is often used to describe someone who is paralyzed with fear. But this idiom might not seem as strange when you know that deer often die from being startled or frightened.

When a deer dies from fright, its eyes will stay open because it didn’t have enough time to close them before it died.

Do deer have good eyesight?

Deer have very good eyesight. The eyes of deer are positioned on either side of their head, so they can have a wide field of view without moving their head much.

In fact, a deer can see a 300-degree field of view without rotating its head. For instance, if we compare to humans who can only see in 180 degrees of sight.

However, more than anything else, deer’s eyes are adapted for being able to detect movements. Together with their night vision, they can see almost everything when the sun comes down.

Yet, deer are limited in their depth perception. From their perspective, it is hard to tell if an object is 20 or 50 yards away.

What animals don’t have eyelids?

This is a question that has been asked by many people, including myself.

There are only a few animals in the world that do not have any layer of eyelids. They include snakes, fish, and a few types of lizards.

However, snakes and lizards have different sorts of eye protection, called the Brille. The brille is a glassy roundish layer of skin that covers their eyes.

On the other side, fish have an adipose eyelid, which also has protection purposes. As well as increasing fish vision in different situations.

Deer do have eyelids. All mammals possess some form of the eyelid. And deer are no exception to this rule. Yet, deer have three, instead of two eyelids, unlike most mammals.

Being the most predation animal, deer required evolutionary adaptation. They blink much less than we do, and they sleep very little.

Dying with their eyes open is something that is happening to different animals, not only deer. In case death occurred while the animal kept its eyes open.

Besides great hearing and a sharp sense of smell, a deer’s power of sight is a very important survival tool.