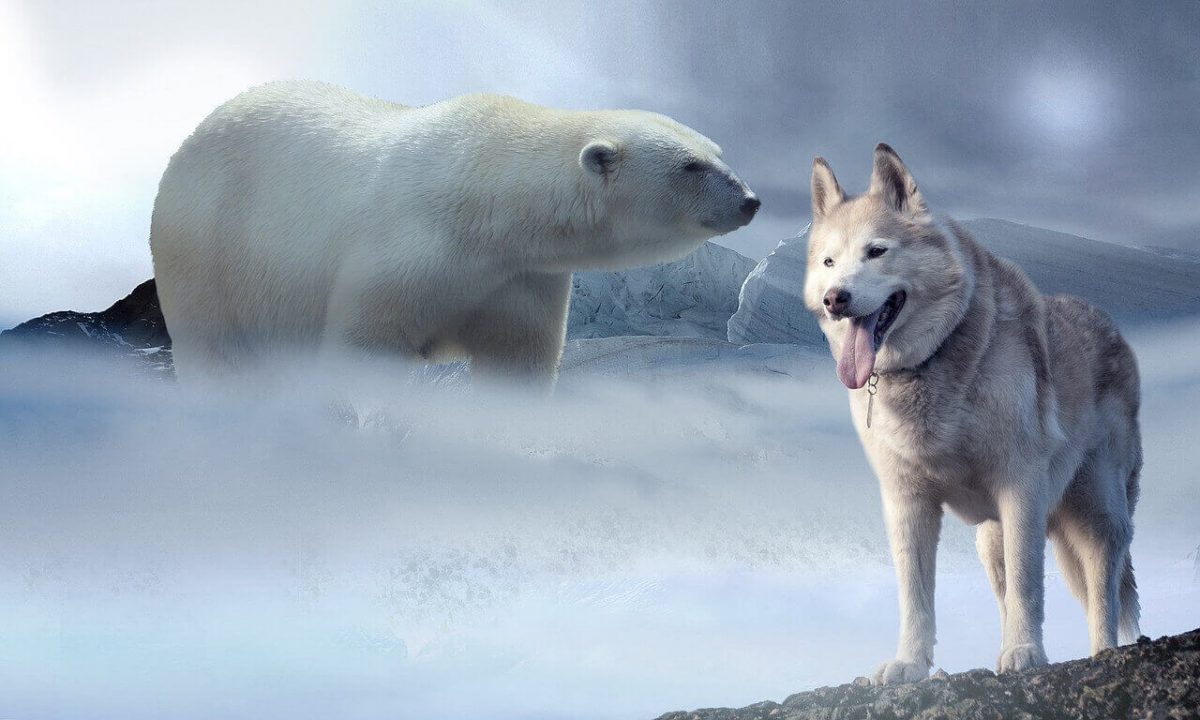 Most of the bear species are omnivores. Meaning they eat both plant and animal food origin. Bears eat a lot of food—especially when preparing for hibernation.

As a result, a bear would eat 90 lbs of food daily. And before going to long rest, some bears would even double their weight.

So, you may wonder whether bears eat wolves?

Bears usually do not eat wolves. Yet, the confrontations between bears and wolves are often. And in some rare cases, a bear would eat a wolf. Around 80% of bears’ food comes from plant matter and they normally consume food that is easy to get. A bear’s diet mainly consists of plants, insects, carrion, berries, fish, and small animals.

Who is stronger between these two predators? Can a wolf pack defeat the bear? And what other animals do bears eat? Keep reading.

Bears would sometimes kill and eat wolf pups. And wolves would also attack bears’ cubs if the opportunity arises.

The same goes for wolves and bears.

Are wolves and bears enemies?

Both wolves and bears are predators. And these predators are at the top of the food chain in every environment they live in.

So, close encounters between these animals are not rare. Usually, the fight would happen because of the food.

If the wolf pack is small, bears are known to scavenge their prey. On the flip side, a large wolf family would scare off a bear and prey on his catch.

Bear vs wolf – who would win?

All wolf species are social animals. They hunt and live in groups. On the other side, bears are solitary animals and would usually be alone, except for a mother taking care of her cubs.

On its own wolf wouldn’t risk attacking a bear. In other words, a real-life situation where a wolf alone is fighting a bear is close to none.

Wolf strength reflects in the combined power of the pack. They use their number to overwhelm the enemy.

However, in theory, a wolf wouldn’t stand a chance against the bear in a death battle. The power difference between the two animals is huge. Average bear weighing around 600 lbs, while wolfs is 180 lbs.

The bear conflict with wolves pack in most cases is over a carcass or if one of the sides feels the danger to its babies.

Although wolves are faster and more agile animals, they are aware that one bear strike with his powerful forepaw would cause serious injuries. As a result, in most cases, wolves wouldn’t risk losing life to one of their pack mates.

But, in a death battle, a bear would win against a smaller wolf pack. While against a larger group of wolves, wolves would probably defeat the bear.

In this epic video, a group of a wolf pack surrounded a Grizzly bear in a conflict over a carcass.

What animals do bears eat?

Bears are opportunistic predators. Unlike lions, sharks, cheetahs, etc. that pursue their prey, bears usually wait for their prey to come near.

A bear kills its prey by biting it on the neck or striking it with his powerful forepaw.

Yet, bears are usually unwilling to spend more calories than they would gain from their prey. As a result, they mostly feast on small rodents and animals.

Some animals that bears eat include:

Other animals that eat wolves

Being the top predators in every habitat, they live in, wolves do not have many natural predators.

However, some species are known to kill and feast on wolves. They include:

In conclusion, bears do not typically eat wolves. But in rare situations, a bear might kill and prey on a wolf.

In the habitats where these predators meet, conflicts occasionally occur. Yet, the respect between these species is great, and often times one of the sides would back off. And most of the close encounters end without fatal injuries.

If you liked this article, you may also be interested in similar articles. Here are some recommended posts:

Why do bears wave?