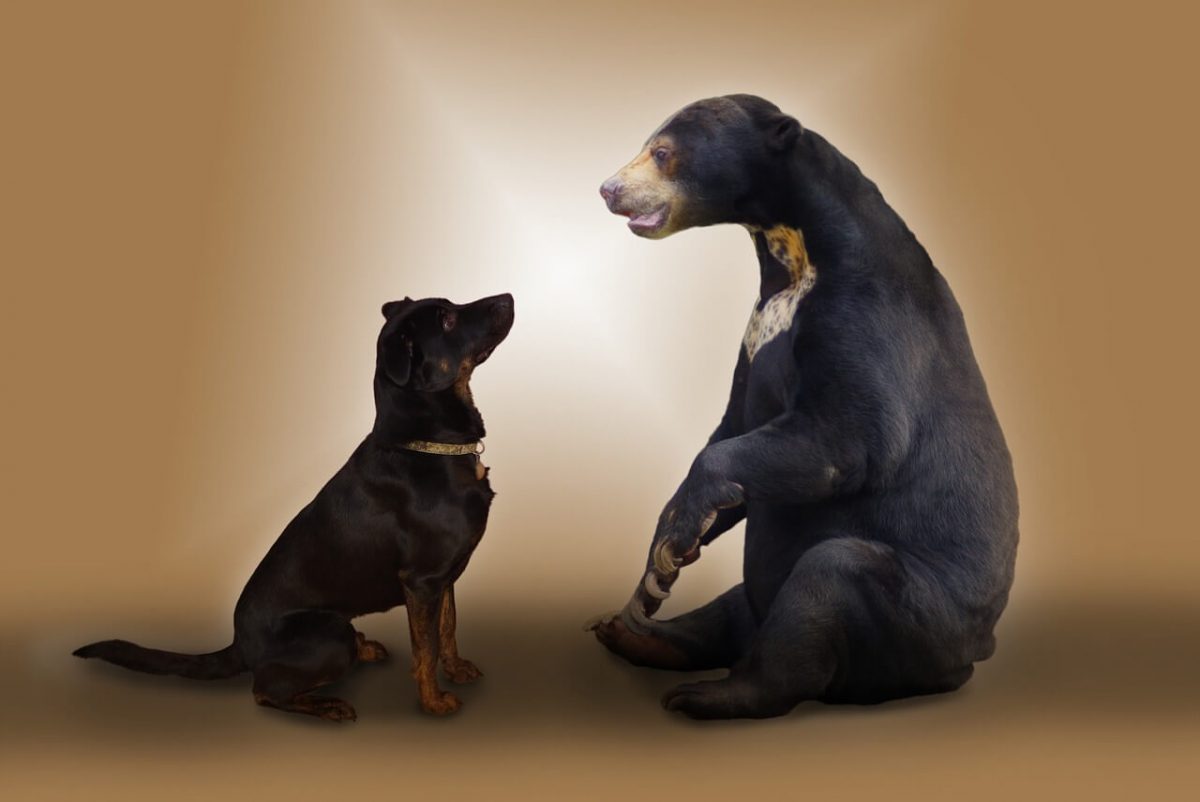 Each species of bear behave and act differently. They have different eating habits, different ways of keeping their territory, levels of aggression, etc.

In the past, it was normal to use dogs for hunting bears, but today more and more countries are making it illegal. But, would a bear eat a big and strong dog? And how about your couch potato puddle? Would a bear eat a small dog?

In general, bears do not eat dogs. In most cases, a bear would avoid the confrontation with a dog. While bears are capable of hurting and eventually eating a dog, they would usually run away. Yet, in case the dog poses a threat to their cub, bears may become aggressive and eventually kill and eat a dog.

Probably not! Most bears wouldn’t eat a dog as they tend to avoid interacting with them unless they feel threatened. Bears eat small animals like rabbits, raccoons, skunks, among others. So they wouldn’t have a problem with eating a small dog.

If your house pet steps into the bear territory, it could be mistaken for prey. And there is a high chance that bears would eat them, but it is unlikely that bears would actively hunt your dog like they do other small animals.

This is the case for most of the bear species, except polar bears. Polar bears are the biggest carnivores on the planet. Due to the harsh climate and lack of food, bears wouldn’t think twice before eating a dog. Young and undernourished polar bears are also known to be hunting humans.

Except for the polar bear, most bear species would not attack a dog unless they feel threatened. Yes, Grizzly bears and brown bears eat small animals. But they wouldn’t attack your dog without any reason. Bears are naturally afraid of dogs, and a barking dog is usually enough to keep the bear at a distance.

This doesn’t mean there were no incidents in which bears did hurt or killed dogs. A 3-year study of bear–dog incidents in North America showed most cases involved a dog that was off the leash. So it is more likely dogs would attack or charge at the bear first.

Depending on the situation and the species of the bear, this can play out in different ways. Black bears would more likely retreat and seek refuge in the tree. They are good climbers and they search for safety by climbing. The grizzly bear is not an expert climber and would keep ground to defend himself.

Are bears afraid of dogs?

For the most part, bears are shy and react to new things carefully and with a dose of fear. Bears naturally don’t like dogs and are afraid of them.

A barking dog in a camp would keep the curious and hungry bears away. It is unlikely the bear would approach a settlement if a dog is guarding the grounds.

In recent times, humans use specially trained dogs to keep the bears away from garbage dumps, campsites, or other areas where they are likely to encounter humans.

This tactic proved to work much better and is more humane than hunting bears that come near these areas. Bears that encounter dogs tend to remember the incident and are going to avoid these areas in the future.

Can a dog outrun a bear?

Most dogs can’t outrun a bear. Average dogs can run up to 31MPH, while bears can run at speeds more than 35MPH. The fastest dogs in the world can run around 40MPH but bears can likely reach those speeds as well.

So, we are confident to say that dogs can’t outrun a bear. Yet, this doesn’t mean dogs can’t protect against bears.

Trained dogs have shown to be the best way of protecting areas where bears can cross paths with humans. The camp ranger that works with these dogs says that in 20 years of experience there was never an injured dog. They saved many bears from being hurt or killed as a result.

Best dogs to keep bears away

Throughout history, humans have used dogs to protect their settlements and to hunt.

Nowadays, with urbanization and converting land into farmland, this is changing. Wild animals are not as common to come across cities and human settlements. But in some countries and towns where they still live near nature, people use dogs to keep the bears away.

These are some of the best dogs to keep the bears away:

Dogs have been used to hunt bears throughout centuries. It’s more likely that a dog would attack a bear than the other way around. Bears would rarely attack a dog unprovoked.

When attacked by a dog, their initial reaction would be to run away. But if that’s not an option, they will defend themselves. Most incidents where dogs got hurt or killed involved a dog without a leash. In those incidents, dogs were probably the ones that were charging or attacking a bear.

While this is true for most species, polar bears are the biggest carnivore mammals on the planet and they are seen hunting and killing dogs for prey.

How to protect pets from bear attack in New Hampshire | Black bear | WildlifeHelp.org

Does hiking with a dog in bear country increase or decrease your risk of a bear encounter? – The Great Outdoors Stack Exchange