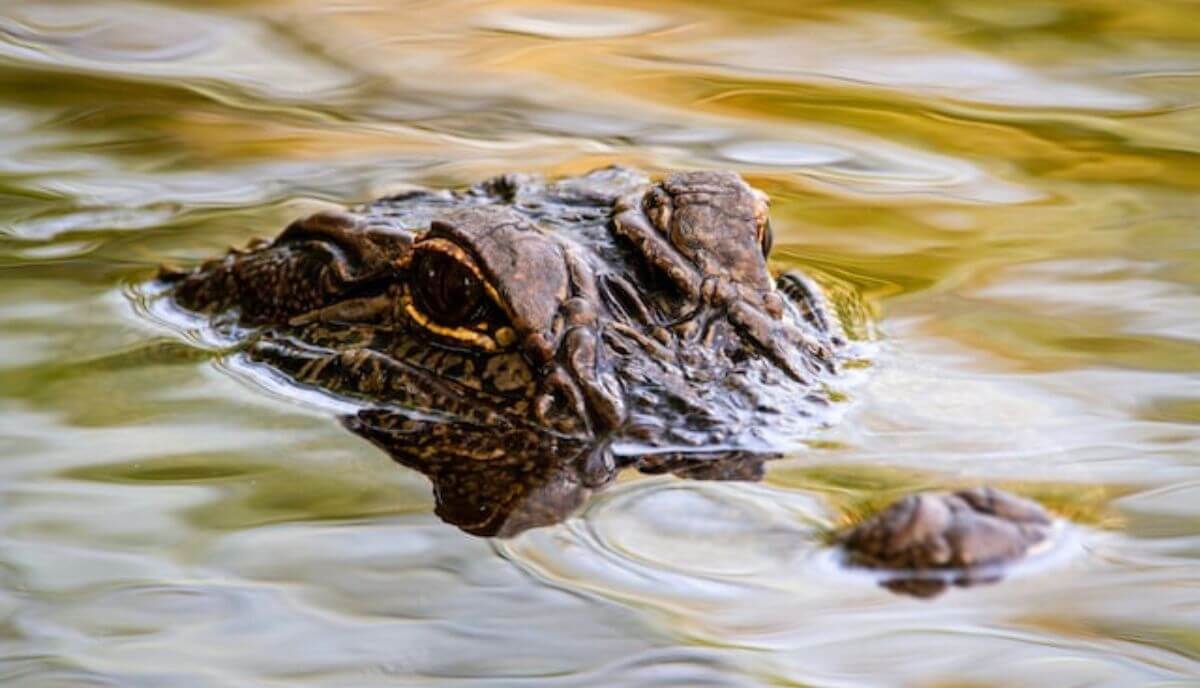 South Carolina is fondly called the “Palmetto State” due to the large population of palmetto trees that burst into fragrant bloom every summer.

In addition to an abundance of fragrant palmettos, South Carolina has a diverse natural habitat that several creatures call home. However, not all of them care about southern hospitality.

This article will examine the 8 deadliest and most dangerous animals in South Carolina.

8 Most Dangerous Animals in South Carolina

There are many different kinds of animals in South Carolina, from reptiles and birds to mammals and sharks – Palmetto State provides a safe haven and the perfect habitat for thousands of species.

Below are listed some of the most dangerous animals in South Carolina: 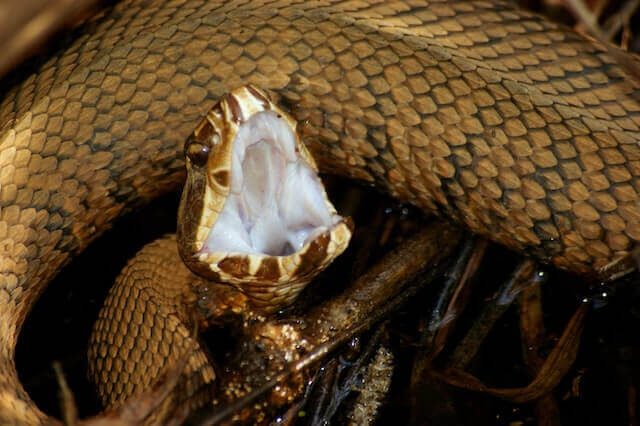 Also called the swamp no mocassin, this semi-aquatic snake is one formidable reptile. It gets its name from its defensive stance.

When threatened, the cottonmouth will coil its body and gape wide at the intruder, revealing its fearsome fangs and the white lining of its mouth.

As a partly aquatic animal, the cottonmouth prefers wet habitats where it can easily navigate through water bodies. Consequently, cottonmouths typically avoid the piedmont and mountain regions of South Carolina.

Since their diet majorly consists of fish, they are skillful swimmers.

When in contact with humans, these snakes can deliver painful and fatal bites as a defense mechanism.

A single bite from a cottonmouth causes tissue damage, which could lead to immobility, among other symptoms like sensory loss and infection. If bitten – urgent medical care is essential.

Another fearsome and deadly South Carolina animal is the southern copperhead, simply called the copperhead. Like the cottonmouth, the copperhead doesn’t flee when disturbed – it takes a defensive position and readies itself for an attack.

Except for marine areas, copperheads can be found all over South Carolina.

Its preferred habitat is woodlands and forests, where it can effortlessly blend in with the surroundings.

Avoiding this snake requires caution because it is a master at camouflage and may be easily stepped on, an error it never forgives. When these snakes are involved, watching where you step is a must.

A single bite from the copperhead can kill if not timely treated. Their venom is hemotoxic, meaning it attacks the circulatory system.

If medical care isn’t timely sought, the painful bite could lead to necrosis, possible loss of limbs, and death in the worst scenario.

A glance at this predator’s bio will send chills down your spine.

As the largest living rattlesnake and the longest known venomous snake, measuring up to 8 feet in some cases, this is undoubtedly one of South Carolina’s deadliest creatures.

Their preferred habitats include pine forests, grasslands, and woodlands, where they can easily conceal themselves.

Before lunging into the attack, diamondback rattlesnakes will usually rattle their tails as a warning. If their warnings are ignored, then they strike. Their long fangs can inject a painful amount of venom in a single bite.

In addition to the pain, the venom immediately begins to attack blood vessels and damage tissues around the bite. Urgent medical attention is needed to prevent death. 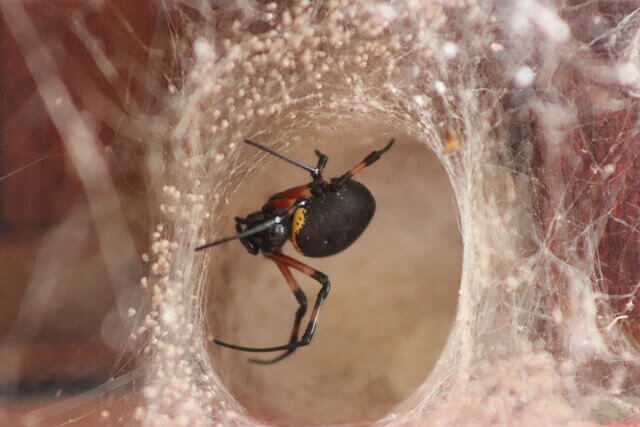 With a reputation for feeding on their mates after intercourse, these spiders are notorious for being heartless predators.

The species gets its name from the cannibalistic nature of females, who feed on the males after mating. In turn, some males seek out females that have already eaten before approaching them to mate.

These dangerous South Carolina animals can be found mainly in burrows, under rock and wood piles, and in hollow tree stumps. Their main diet consists of small insects, but their venomous bites can kill rodents and small pets.

Although the black widow’s venom isn’t fatal to healthy humans, it can still lead to complications.

Unlike snakes with hemotoxins that affect the blood vessels, black widow venom is neurotoxic, meaning it attacks the nervous system.

These shy arachnids would rather be avoided; however, it’s less comforting to know that they also prefer to stay indoors rather than outdoors.

Brown Recluse Spiders’ affinity for temperature-controlled environments brings this threat closer to home than the rest of our list.

As such, they’re found in places like sheds, garages, closets, and other corners of the house.

Unlike the black widow, brown recluse spiders inject hemotoxic venom that attacks blood vessels when they bite. This results in gnarly infections, tissue damage, and necrosis, to name a few.

A brown recluse spider’s bite could be fatal if medical care isn’t administered in time. 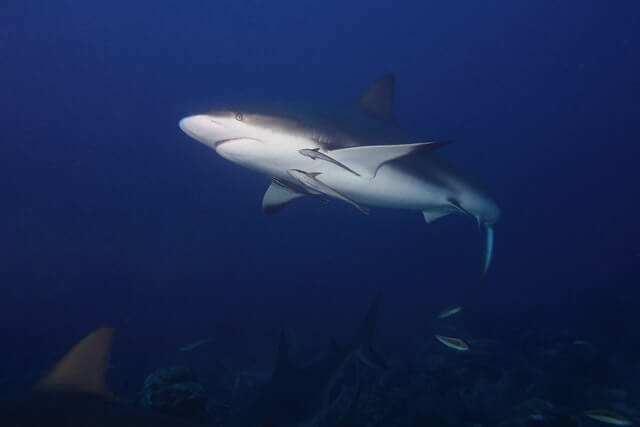 As a coastal state bordering the Atlantic Ocean in the east, the coastal plains of South Carolina are loved for their scenic views and beaches.

However, the waters of South Carolina aren’t all that safe. Swimmers beware!

Forming a third of the deadly shark trio next to great whites and tiger sharks, the bull shark is a famously aggressive predator.

Weighing up to 500 pounds in some cases, bull sharks use brute force during attacks. In addition to having the upper hand as aquatic creatures, their bone-crushing jaws can rip a human in half.

In South Carolina alone, four people per year, on average, get bitten by sharks. (source) 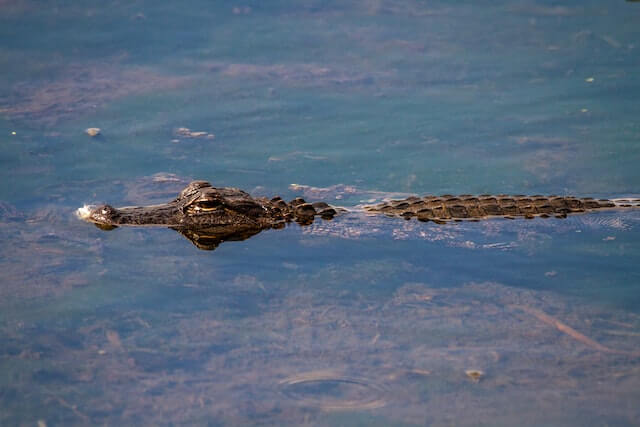 Although this is the least aggressive animal on our list, it is still a dangerous animal that lives in South Carolina.

Tourists and natives alike are advised not to feed them to avoid creating a dependency on humans. Though they are not aggressive, it is best to watch them from afar and leave them undisturbed.

Consequently, if you’re feeling like swimming in a lake or pond, be sure it’s not an alligator-infested one. 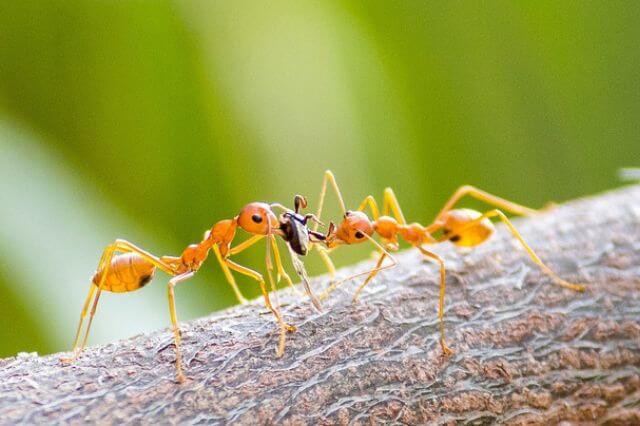 You may consider this a shocking entry on our list of deadly animals in South Carolina, but these gnarled creatures are super aggressive and dangerous.

Moreover, they have the strength of numbers on their side because whenever you find one, the whole colony is probably just nearby.

Fire ants are perhaps the most aggressive ant species on the planet, and unfortunately, South Carolina has a whole lot of them. They get their name from the burning sensation they cause when they sting and inject venom into their victims.

These venomous stings are extremely painful and could even prove fatal in cases where the individual is sensitive or is unlucky enough to be attacked by a hoard of fire ants.

In less severe cases, the welts from the sting could blister, and the victim could remain feverish for as long as the venom remains in their body system.

It is crucial to be aware of these deadly animals in South Carolina and to take precautions outdoors. They can pose a severe threat to humans and should be avoided.

If you happen to come into contact with one of these animals, it is essential to seek medical attention immediately.