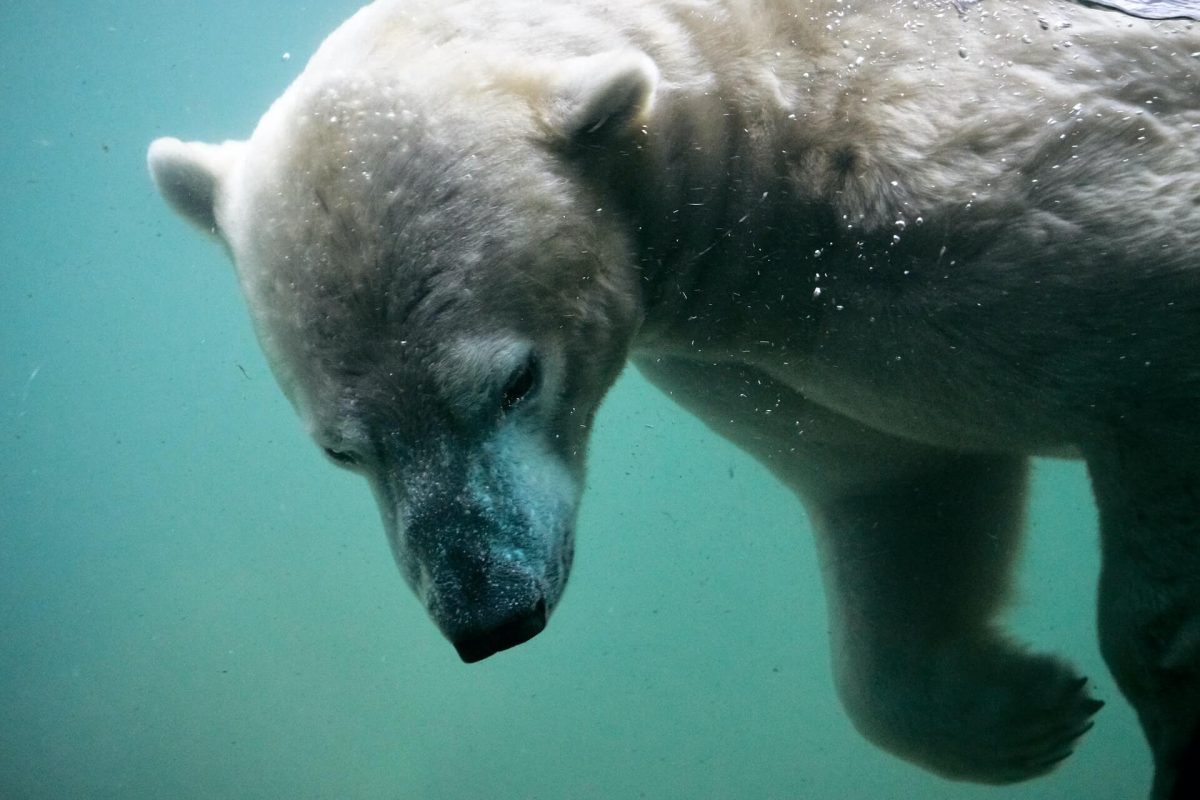 The polar bear is also known as an ice bear. It is the largest and most powerful extent carnivore on land. Bear’s power explains the fact that they do not have natural predators, except for humans.

They are widely spread within the Arctic area, and they spend the majority of their lives on the sea ice.

Polar bears are greatly equipped for water and ice. Their thick fur is water repellent, allowing them to shake off water and ice, which form after going inside the water.

But what about breathing? Can polar bears breathe underwater? If that is the question on your mind, then this article may help you understand better polar bears’ breathing and swimming abilities.

Polar bears do not breathe underwater. However, they have the capability to hold their breath for two minutes before returning to the surface. A polar bear closes off its nose to prevent the water from entering while swimming.

No, polar bears can’t breathe underwater. Like any other mammal species, bears need to breathe air in order to survive. Unlike fish who possess gills, polar bears have lungs and need to inhale oxygen above the water.

Polar bears will maximize the breath hold when hunting resting seals on the ice. However, their main hunting technique is from above the water. Polar bears catch seals in the moment when they come to the surface of sea ice to breathe air.

How long can a polar bear swim underwater?

A polar bear is made for ice and cold water. They have a two-four-inch layer of fat, which helps them stay warm as they swim.

Polar bears usually swim at depths of 10-15ft and cover a distance of 145-165ft. The longest dive is recorded to be 3 min and 10s. However, the diving potentials of polar bears are not completely researched.

Polar bears have very good vision underwater. Like most aquatic mammals, they have “eyelids.” A specialized eye membrane that serves as the second lens, protecting the eyes and allowing them to see while swimming underwater.

While submerged, polar bears can see clearly up to 15 ft. away.

Nevertheless, polar bears in general, are much more focused on the sense of smell to interpret the world around them.

Polar bears are very good swimmers. This is not a surprising fact since they are classified as marine mammals.

Polar bears spend most of their lives near the water, but they can swim for hours without resting. Even though they are more closely related to land mammals, these giants are graceful in the water.

When swimming, polar bears close their nostrils. Their front paws (up to 12 inc. wide) act as paddles while holding their hind legs out flat, serving as rudders.

Another reason that positively affects bears swimming abilities are hollow hairs. They act as a tiny float, making the bear more buoyant.

Even though ice bears are great swimmers, they can get in trouble when facing storms during their long swims.

Sometimes a long swim is necessary as there is a big distance between the shore and sea ice. Storms and long swims are especially difficult and sometimes fatal for the cubs.

Even adult bears have, on occasion, perished when forced to swim a distance that is too far above their swimming capacity.

This leads us to the next question…

How far can a polar bear swim?

It is not rare to see Ice bears 30 miles or more from land or sea ice. The longest polar bear swim recorded is 427 miles (roughly as the distance between Washington, D.C., and Boston). Throughout the time of the swim, the bear lost almost 25% of its body weight.

Climate change causes the global temperature to rise, especially in the Arctic.

As a result, polar bears are forced to swim long distances due to the melted sea ice. Researches believe that long swim abilities play a significant role in polar bears’ survival.

How long can polar bears stay in the water?

If needed, polar bears can stay in the water for days. Armed with thick fur, ice bears’ body temperature (98.6°F) is maintained even in conditions when air temperatures drop to -35°F.

How good polar bears are insulated tells the fact that they tend to overheat on “warmer” days or after physical activities. Therefore, they go swimming to cool down.

In conclusion, polar bears do not have the ability to breathe underwater. Yet, if required, they can hold their breath for more than 2 minutes.

Polar bears spend the majority of their time on sea ice. However, they are excellent swimmers.

As a result, they are known to swim very long distances if necessary. The thick layer of fat helps polar bears retain heat even in extremely cold conditions.

If you liked this article, you might also be interested in similar posts. Here are some recommended articles: Can otters breathe underwater? , Why do bears wave?