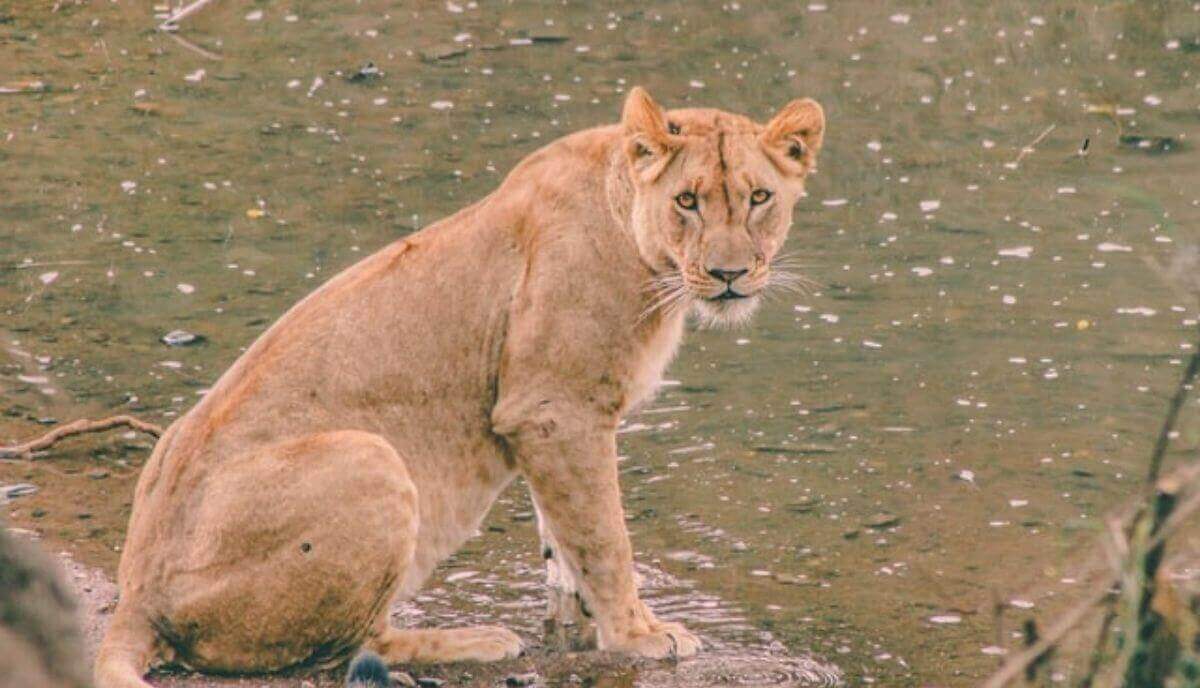 The savannah and grassland territory is dominated by Panthera leo – The king of the wilderness. You certainly have had a chance to see the lion in action, hunting zebras, buffalos, and other big land animals.

This run and catch game necessity makes you think about how the lion will look in the water; specifically, can lions swim?

Yes, lions can swim; still, they avoid going into the water, as they do not cope so well in water as other big cat family members. The main reason lions go into the water is to cool off or to swim over to the other side of the land. Lions are primarily terrestrial animals, and they favor land over water.

Compared to tigers and jaguars, lions are not as good swimmers. The reason lions are not proficient swimmers like their relatives is that they don’t swim pretty often. Unlike lions, jaguars and tigers enjoy the water, and they are regular swimmers that hunt aquatic animals.

On the other hand, lions only go in the water for a particular reason.

The foremost reason for which a lion goes into water is to cool off and relax its muscles.

Savanna grassland temperature reaches its peak during May-July. The typical summer temperature is 78° to 86° F. Centigrade with 30-40 inches of annual rainfall.

During this boiling period, hot-blooded animals like lions suffer a lot to maintain their body temperature. The only blessing they have is water.

The king of the jungle – lion, when chasing his prey, make sure he catches it at any cost. The all-time favorite prey of lions includes wild hogs, buffalos, zebras, young elephants.

However, if it is necessary, a lion will jump in the water to catch its victim and secure the meal for its pride.

Reaching the other part of the land

We use bridges when we have to reach the other part of the land. On the other side of the story, animals don’t have bridges; they swim through the water to reach the ground.

If necessary, lions will venture into the water in order to swim to the other side of the land.

How fast do lions swim?

Lions are not fast deep-sea divers. They swim slowly and carefully so as not to drown in the water. The moment lions jump in the water, their fur gets wet. Heavy wet coats slow down their already poor swimming ability.

In short, they found it challenging to swim fast in deep water.

Lions swim using their four limbs. They duck their body, keeping limbs straight and head above the water. They move their limbs in the forward direction to create motion in water. The upper limbs move at the same time, and vice versa for the back limbs.

Most of the time, they stay around the coast, or if they swim, they prefer lakes or rivers which are not more profound.

The members of the cat family have different tastes when it comes to water. Lions elude water because they are not good swimmers, and they prefer land over water. However, on very hot days, lions go in the water to cool themselves off.

Lions don’t have a preference for swimming, especially for an extended period. They like keeping their bodies near the coast. Yet, if lions face circumstances to swim, they will till their limbs allow them.

Does it mean that lions hate water? Absolutely not!

Besides prey availability close by, when choosing territories, lion prides tend to settle near the water. Even though they can go without water for a few days, the water supply is essential for their survival.

Can Lions Swim In Deep Water?

Lions can’t swim in deep water or underwater. Their body is not adapted to water territory, and if the lion tries to swim underwater, it will fill water in his lungs, eventually leading to death.

Lions are pretty well aware of their territory, and deepwater is not lions’ territory. When they swim, they prefer swimming in waters no deeper than three feet. Consequently, it is rare to see lions swimming in the deep part.

Aforementioned, lions are pretty well aware of their territory. Be it land or water: They know all short-cuts.

I hope I have helped you with the question: can lions swim or how well (bad) they can actually swim.

To survive in the ecosystem, animals adapt to changes in their habitat and nature. Water is not the preferred habitat of lions, but for survival, they have to make themselves flexible.

If you liked this article, I recommend you to read – do lions live in the jungle?