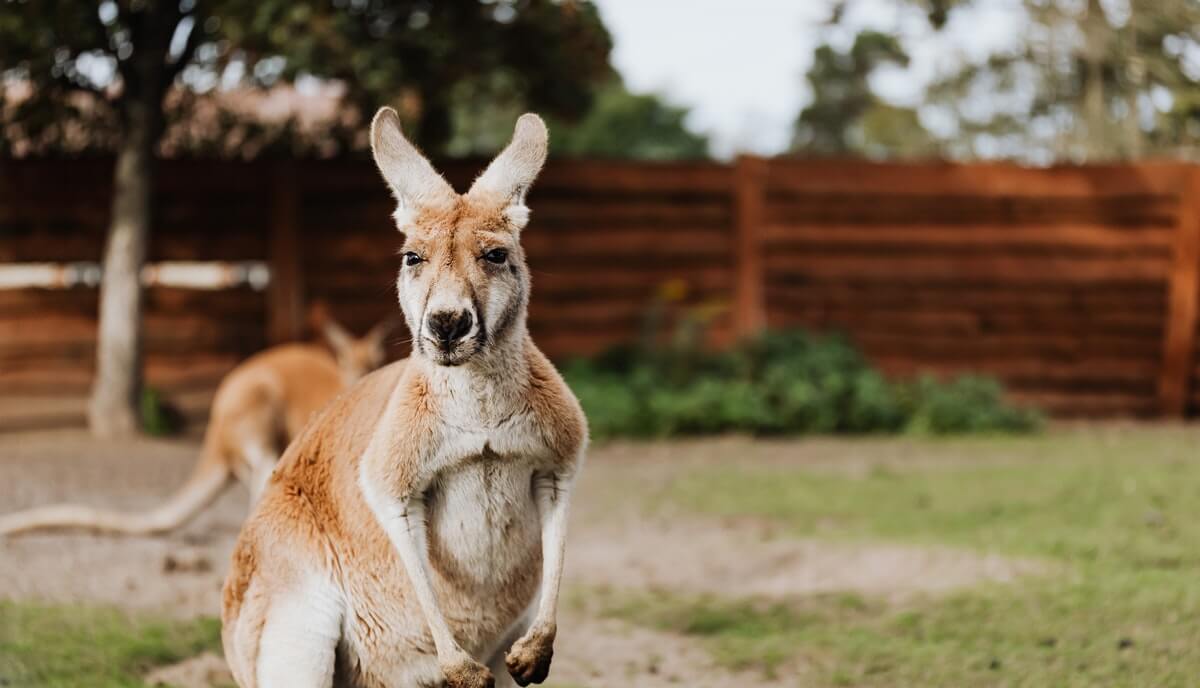 Kangaroos are without a doubt one of the most athletic creatures in the animal kingdom. Their jumping on the wide-open plains across Australia leaves no one indifferent. Yet, for many people, the question of whether kangaroos can walk backwards remains unanswered. So, can kangaroos walk backwards?

Here is the quick answer, and later in this article, we are going to elaborate further:

Even though the kangaroos’ hind legs are separated, in order to move forward, their legs have to move at the same time. The size of their feet prevents them from moving independently of one foot from the other.

Also, their tail, which is very long and muscular, further adds to the inability to walk backwards.

Although feet and tails are the main tools for kangaroo effective movement, these are also the reasons for the impossibility of walking backward.

Kangaroos can walk forward in a particular way. Even though they primarily move by hopping on their hind legs, kangaroos can also walk on all four feet. In some cases, like grazing in grasslands or just moving around slowly, kangaroos would do crawl-walking with the help of theirs forelimbs.

When walking on all four, a kangaroo will lean on the ground with its front legs, supporting its bodyweight together with its tail, forming the tripod position. Then, a kangaroo swings its hind legs forward and moves slowly by repeating the same process.

Is this considered normal walking? Well, it depends on your definition of normal walking. However, if you have wondered if kangaroos can walk the same way humans do – the answer is no. Kangaroos’ feet are too large, and they hop as the primary way of locomotion.

Why do kangaroos hop instead of walk?

The main reason kangaroos hop instead of walking movements lies in the evolution.

The kangaroo’s great-ancestor (who looked like today’s opossum) lived on a tree, and its legs were suited for climbing treetops in Australia. As this opossum-like animal was struggling to walk efficiently on the ground, it slowly started to adopt hop movements as the main way of locomotion.

Today, kangaroos are completely evolved into hopping animals which is a highly effective mode of movement. Also, it is very energy efficient, as they almost waste no effort on breathing.

With that in mind, kangaroos use bouncing as their main means of travel, as it helps them cover long distances in search of food without consuming much energy.

Kangaroos do not run – kangaroos hop. The hopping movement is also known as saltation. Kangaroos are the largest hopping animals in the world, and the maximum speed they can reach by hopping is about 44 mph (71 kph).

However, they can comfortably jump at speeds of 13 to 16 mph (21 to 26 kph) over longer distances. When at higher speeds, kangaroos can travel over 25 feet (7.6 meters) in one leap.

Kangaroos are strong animals, and the ability to jump over long distances lies in their genetics.

More than 50% of the kangaroos’ total weight is muscles. With the majority being situated around the pelvis and hind legs. As a result, kangaroos have one of the strongest hind legs in the whole animal kingdom.

These super athletic legs enable them to jump continuously without much energy expenditure. Also, their tail, which acts as a counterbalance further helps to their effective jumping.

Other animals that can’t walk backwards

Most animals are capable of moving in any direction. Yet, besides kangaroos, there are few other animals that can not walk backwards.

Evolutionary development has made kangaroos jump as their primary form of movement. Despite not being capable of moving backward, kangaroos are still very agile creatures.

Jumping instead of walking, is in fact, a very efficient form of locomotion. These marsupials are able to cover long distances, at high speeds, without getting much tired.