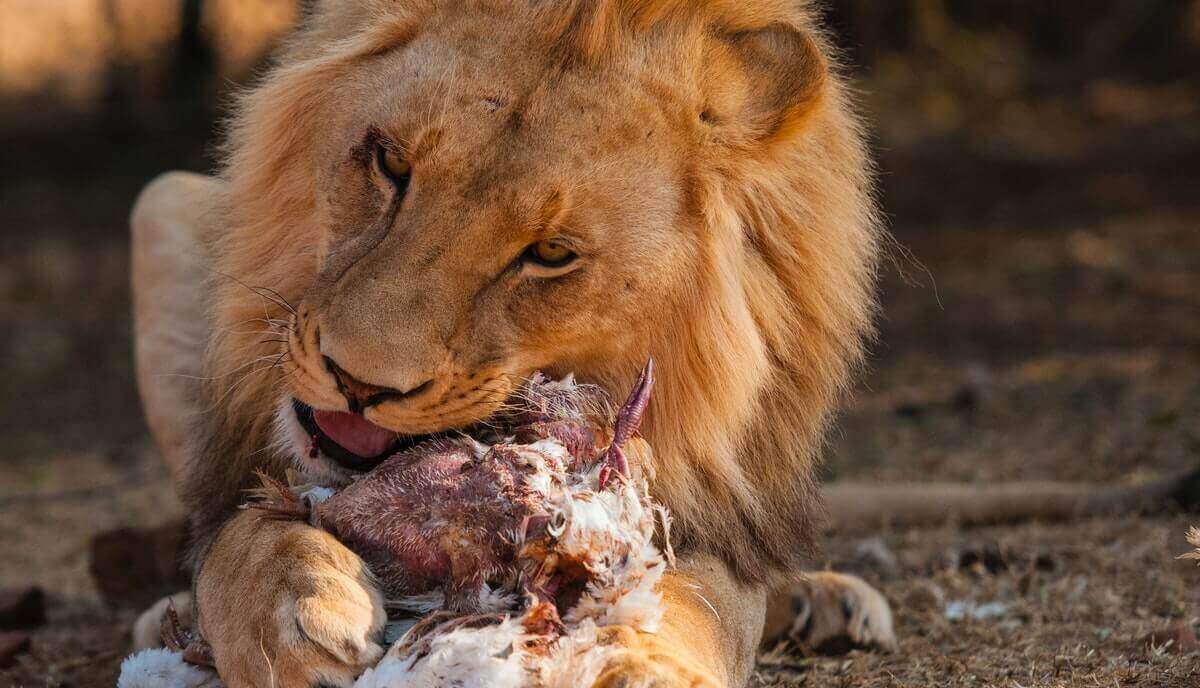 The name carnivore is generated from the Latin words carnis, meaning “meat,” or “flesh,” and vorare, which means “devour.”

Animals that are carnivores can get their vital nutrients and energy from eating meat by hunting or scavenging. But plants can also be carnivores and insects, not just big and scary animals like lions and tigers.

So, what does that mean? Can carnivores eat plants, or can they only eat the flesh of other animals?

A carnivore is an organism that feeds on animal meat as the main part of its diet, yet, carnivores like hypocarnivores and mesocarnivores can and eat plants as a part of their regular diet. But not all carnivores can eat plants. Obligate carnivores eat only meat, and they are not able to digest plant-origin food.

Do Carnivores Only Eat Meat?

Obligate carnivores, which are often called predators, hunt down other animals and eat their meat. This type of carnivore only eats meat because it’s the only way to get in the required nutrients. Other carnivores like mesocarnivores and hypocarnivores eat non-meat food as well.

For example, sea lions are animals that eat fish primarily, and they are called piscivores.

Lizards and bats eat insects, and they are called insectivores. Even some insects like praying mantises, ladybugs, and dragonflies eat other insects.

There are even carnivores that are considered to be cannibals because they eat the flesh of the members of their species. And it may sound shocking, but many animals are indeed cannibals.

When it comes to mammals, bears and chimpanzees are known to kill and eat the young ones of their species. And with insects, we all known about the tendencies of a female praying mantis to kill and eat its mate.

Some carnivores even eat humans and are called man-eaters. Those animals are some sharks, polar bears, and alligators.

When you think about carnivores that hunt, the first thought that comes to your mind is big cats, like lions and tigers, and you are right. When it comes to getting food, most carnivores are hunters and will easily hunt for their food.

While others are scavengers, and they will not hunt for food, they will eat the flesh of animals that have died naturally or left by other carnivores that are hunters. Hyenas are carnivores, and they are infamous for snatching meat that was hunted by another carnivore.

As I’ve mentioned, the main part of the carnivore food intake consists of animal flesh and meat. But, you will notice that I’ve said the MAIN and not the ONLY food source.

In fact, the majority of carnivore animals supplement their diet with plant-based food. And this is why we can split carnivores into 3 categories based on the level of meat consumption.

Hypocarnivores – usually do not consume meat more than 30% of their total food intake. The larger part of their diet includes fungi, plants, fruits. The most recognized members of this meat-eating class are black bears, grizzly bears, and kinkajou monkeys.

Obligate carnivores or Hypercarnivores – this group of carnivores animals includes owls, tigers, lions, leopards, great white sharks, eagles, among others. Hypercarnivores, either by hunting or scavenging, consume more than 70% of meat in their regular nutrition.

Mesocarnivores – animals that belong to this category are foxes, raccoons, coyotes, otters, bobcats, etc. The diet of mesocarnivores consists of 50 to 70% of meat-origin food. Mesocarnviores usually complement their diet with berries, nuts, roots, and other plant material food.

Why Do Carnivores Eat Meat?

Carnivores are pre-designed to eat the meat of other organisms. Their digestive system is meant to digest meat and other animal products efficiently.

Their teeth are also built differently to quickly eat the flesh, bones, and other animal parts. In contrast to other types of animals, the teeth of a carnivore are sharper and more prolonged.

In addition to their sharp teeth, their powerful claws also help them hunt and eat other animals. Carnivores are simply engendered by mother nature to eat meat.

Some carnivores that normally eat plants can also digest them, while others cannot do that. Obligate carnivores are not capable of digesting plants, and they can’t get nutrients out of them. Other carnivores, hypocarnivores, and mesocarnivores can digest plants as they feed on plants and fungi from 30 to 70 percent of their diet.

However, most carnivores are not classified as obligate carnivores and plant intake comes as a normal feeding habit.

Although hypocarnivores and mesocarnivores prefer meat, they are able to survive and digest berries, nuts, roots, and many other vegetation foods. The best examples are foxes and bears.

These animals are opportunistic feeders who favor animals based food. However, in case of meat scarcity, they would satisfy their hunger with plants.

Due to the thin line between some carnivores and omnivores, a few hypocarnivores animals are also referred to as omnivores.

Can Carnivores Survive on Plants?

To this question, we can give a simple answer, and it would be a no. Carnivores being the meat-eaters of nature, can’t survive only on a plant-based diet. However, this question is a bit complex, so another answer can be that carnivores can survive on plants, but only specific types of carnivores.

Obligate carnivores and mesocarnivores that depend solely or mostly on meat definitely can’t survive only on plants because they can’t get the required nutrients out of them. For their survival, they have to intake meat.

On the other hand, hypocarnivores can easily survive only on a plant diet because their regular diet consists of only around 30 percent of meat. Although hypocarnivores still need animal flesh to get some needed nutrients and to gain their full strength.

How Do Carnivores Get Glucose?

Carnivores that also eat plants, especially fruits and berries, quickly get glucose. But what about the other? What about those that don’t eat plants at all?

Firstly, when animals eat other animals, they often eat their stomach content, and there are parts of plants and fruits.

But the primary way they manage to get the glucose is by digesting animal tissue. It contains a solid amount of glucose, alongside muscles and liver.

In Summary – Can Carnivores Eat Plants?

The least meat-eating carnivore members are hypocarnivores, and they are also considered to be omnivores as their diet includes only 30 percent meat.