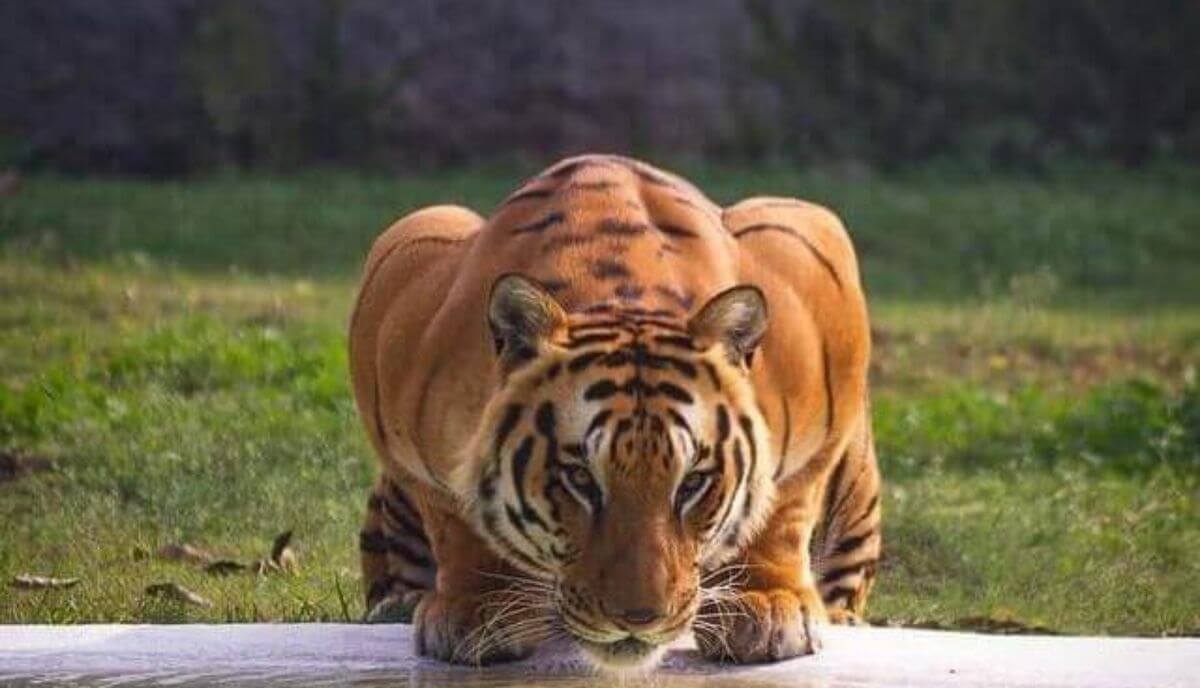 In the constant battle for survival in the wild, the strongest among them have the advantage of surviving. The bodies of the most buff animals have adapted to make them more powerful than the rest. These muscles play a huge part in ensuring that they remain at the top of their food chains.

The jacked animals use their muscles in hunting and fighting when the need arises. Their muscular bodies ensure that they are strong enough to survive through anything. However, some herbivores also fit in this space even though they don’t need to hunt.

The following is a list of the most buff animals in the world: 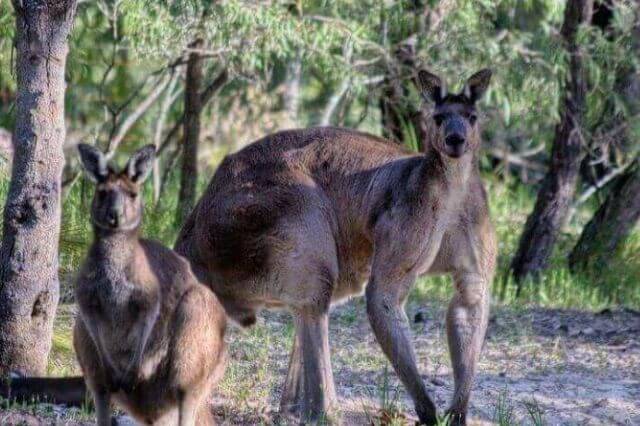 Of all the insanely buff animals, the kangaroo is number one on this list. Among all these animal species, the red kangaroo is the largest. It is the most ripped since it has the most prominent muscles that they use when hopping around and fighting.

Kangaroos have a unique way of locomotion; they are the largest animals that hop to move. They use the hind legs to propel them forward as a spring does.

They hop for miles daily in search of food which is one of the reasons they are so jacked. They can leap up to 30 feet when they move forward and reach heights of 10 feet vertically. All that hopping that they do plays a huge part in building the muscles they need to survive.

The kangaroo tail is one of the strongest parts of its body since it can support its entire weight and even move them forward.

Kangaroos often find themselves box each other, so they can’t be regarded as peaceful animals. Female kangaroos hardly ever fight, so this is more common with the male species. These fights can get quite brutal, so the fittest among kangaroos often wins.

Male kangaroos also pick fights with other animals, including humans. Another interesting fact about kangaroo strenght is that males never stop growing! So, the best way to win a fight against buff kangaroos is to get away from them since they are pretty strong. 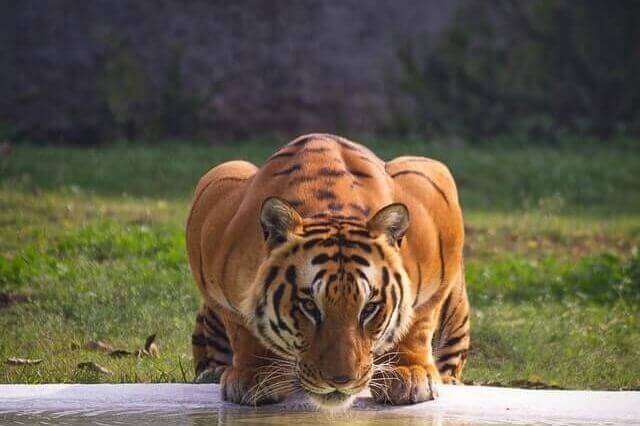 Tigers are one of the strongest big cat species due to their size and powerful muscles. They are usually at the top of their food chain, and how buff they get comes in handy when hunting and overpowering their prey.

The largest of the tigers is the Siberian tiger which can reach 12 feet and weigh up to 700 pounds made up of pure muscles.

Tigers can survive since they are adaptable to various environments. They live in various habitats, in the grasslands, savannas, and even rainforests, and in either place, they are the apex predators.

While tigers are adequate hunters on land, they are excellent climbers too. Tigers climb trees where they have a vantage point to view their prey. In addition, they have semi-webbed feet that also makes them great swimmers.

The paw of a tiger can be 8 x 8 inches, and with their jaws, they can also produce a bite force of up to 1,050 PSI. This makes them incredibly strong such that they can hunt and kill almost any prey in the wild.

Tigers occasionally hunt bears (when food is scarce), which shows how strong they are. 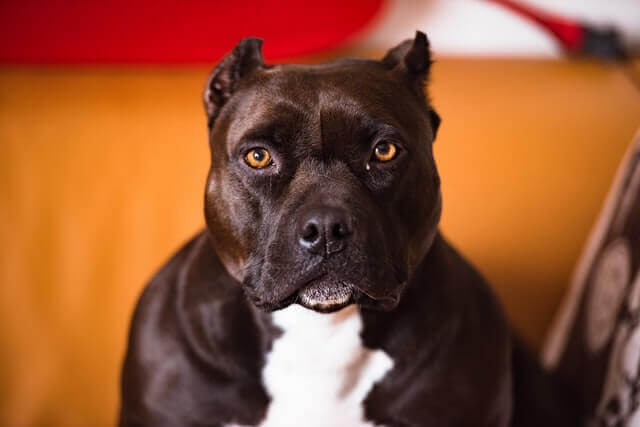 The American pit bull is the most muscular among all the dogs. They are medium-sized animals that, unlike their bad reputation, are very loving towards human beings. However, they can get quite aggressive towards other animals, including fellow dogs.

The pit bull builds its muscles due to frequent exercises such as running and fighting practice. They do not require any special training to become ripped since their bodies are naturally gifted.

American pit bulls have broad shoulders that get bigger with regular walking that also builds their hinds and forelegs.

However, their muscles are not just for show since they make them incredibly strong. Even without specific training, they can take down an adult human thanks to the strength in their forelegs.

When pit bulls are trained, they get more muscular and more robust such that they can take down much larger dogs without breaking a sweat. 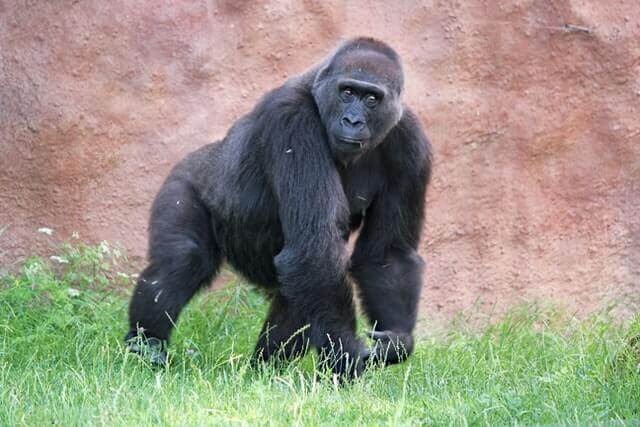 It is the largest primate known for its big muscles and massive chest. While gorillas are primarily herbivores, the food they eat goes straight into their muscles, making them strong enough to survive.

Gorillas spend more than half their day eating, which is why they are so jacked since all the plant matter they consume makes them exceptionally strong.

Interestingly, according to recent studies, the total muscles mass of the zoo gorillas is 37% of the total body weight, while the percentage of muscle mass of the average adult man is 42.

However, the amount of food intake gorillas take per day is enormous (about 18 kg). Whereas most men eat no more than 2 kg of food in one day.

Gorillas are considered to be at least six times stronger than humans. They can weigh up to 500 pounds in adult males. Yet, their strength doesn’t only come from their huge muscles; they also have quite the deadly bite. It is known that their bite can generate over 1,000 pounds of pressure.

Luckily, gorillas are not naturally aggressive animals; they usually warn intruders by thumping their chests. Although, in some cases, males get into fights over the group, which can get quite nasty. 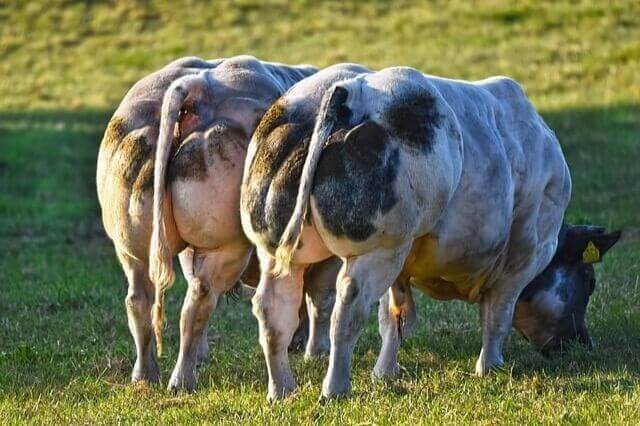 This is a breed of cattle found in Belgium kept for beef. Unlike other cattle known for being quite fatty when they grow big, this breed tends to become muscular in appearance.

They get this way due to something called double muscling. Instead of the fat pockets increasing, the muscle fibers increase in number.

Not only are the adult cattle large, but a newborn Belgian blue calf is also significantly more significant than a normal one. Right from birth, this species of cattle grow at least 20% more muscles than regular cattle.

This is why their feed contains more protein that helps yield more muscle. And consequently, their meat is usually more delicate since it has a double muscling and richer flavor. 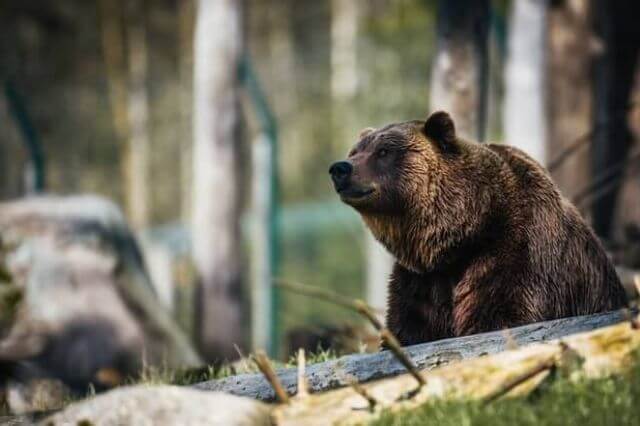 Due to the thick fur covering their bodies, it is easy to think that the grizzly bear is just a chubby, large animal, but this isn’t the case. This North American brown bear is not only large, but it has quite a bit of muscle that makes it one of the strongest bear species in the wild.

It is, however, difficult to see the muscle it has built up since it packs on fat for hibernation in the winter.

The grizzly bear weighs over 700 pounds with a broad chest and muscular forearms. This helps them become strong enough to kill all sorts of animals, such as large moose and elk.

Their paws are also quite strong, which is why a simple blow from them is enough to kill an animal. In addition, they sometimes can uproot small trees that they use to kill other animals in the wild.

When it comes to raw strength, these giants can lift weights that are over 1,000 pounds. That would be an easy win in the strongest man competition! 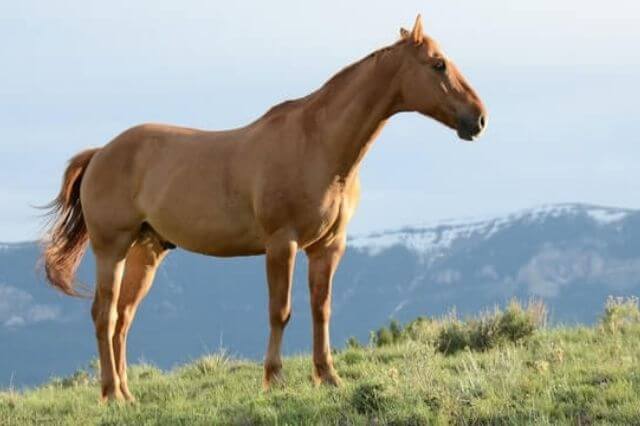 The last members on our list of buff animals are horses. They are usually not wrong when they say as strong as a horse since these animals are pretty powerful.

Horses have large muscles that enable them to carry most things from people to large carriages, and they have most of their power stacked in their legs and back.

The more they exercise their bodies, the more super ripped they become. And thanks to their athletic legs, horses can reach a galloping speed of 55 mph.

This is why it is important to keep horses fit through regular exercise; otherwise, they can pack on weight and become fat instead of jacked.

There are many buff animals both in the wild and at home. One thing that is common about all these animals is what they feed on and how much exercise they get determines how ripped they will be. They need to constantly engage their muscles to ensure that they build their muscles.

While some animals use their jacked and powerful bodies to overpower their prey, others usually scare off any potential threats by just being huge.

And you’ve come to an end of the “list of buff animals” article. Thank you for reading; we hope you’ve enjoyed it.

For the very end, we would like to recommend you a similar read – Skinny Animals