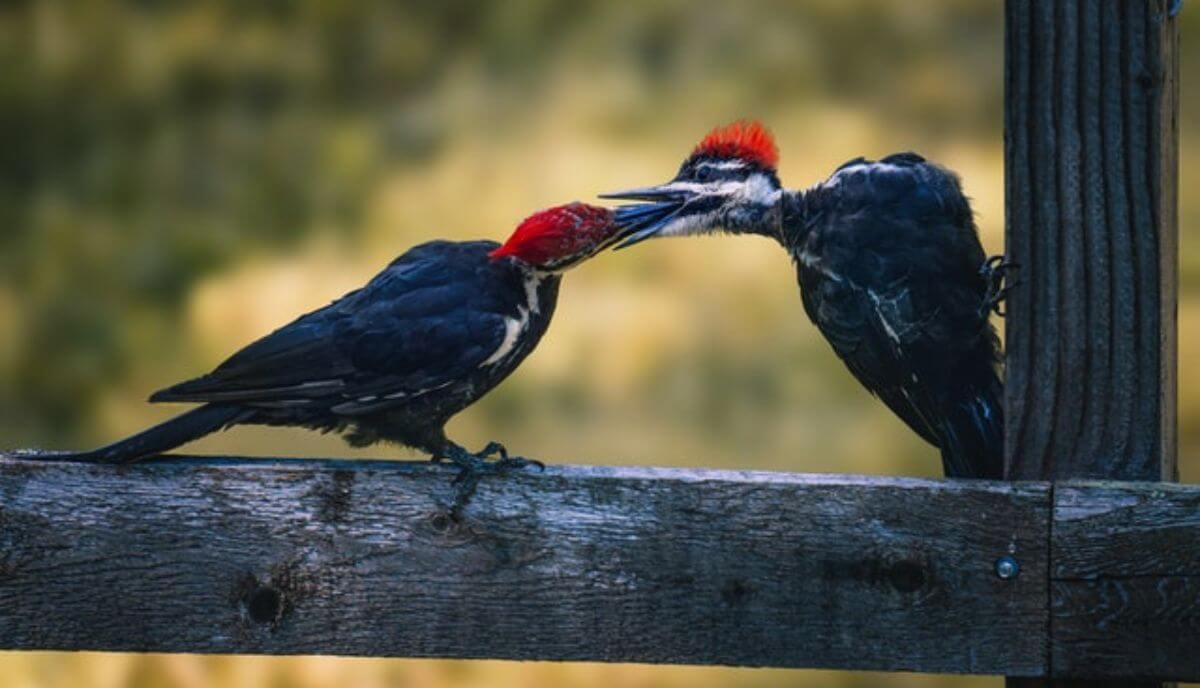 We can all agree that black and red are a great and expensive color combination. They match well on stilettos, ties, clothing, and practically anything.

But how good do these colors look on our feathered friends?

Here’s a list of 13 black and red birds that rock this color duo. You be the judge. 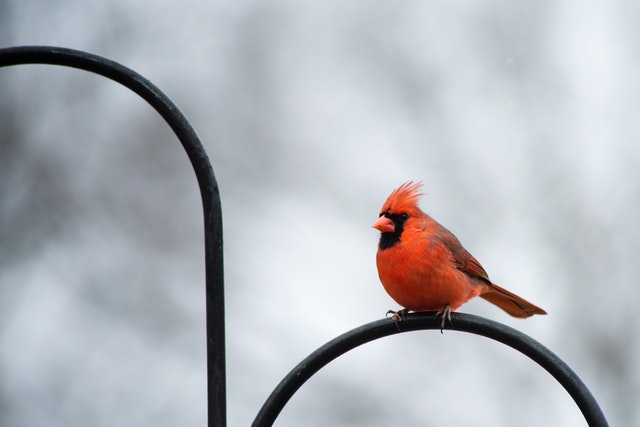 Coloration and identification: The Northern cardinal is a plum medium-sized songbird known for its fiery plumage. Adult males have an all-around bright red plumage, a small black face, and a lighter red beak. Females have reddish olive plumage but red wings and tails.

Another attribute that stands out is the mass of slipped-up red feathers at the top of their small heads.

Distribution and habitat: Northern cardinals are all-year-round residents of the North American continent. They are widespread across the U.S, Mexico, some parts of Canada, Northern Guatemala, and Belize.

Northern cardinals can be found in woodlands, marshes, wetlands, shrublands, suburban cities, and even your backyard.

Nesting: The bird’s nests are buried in thick bushes, shrubs, and vines, usually 3 – 10 feet above the ground. 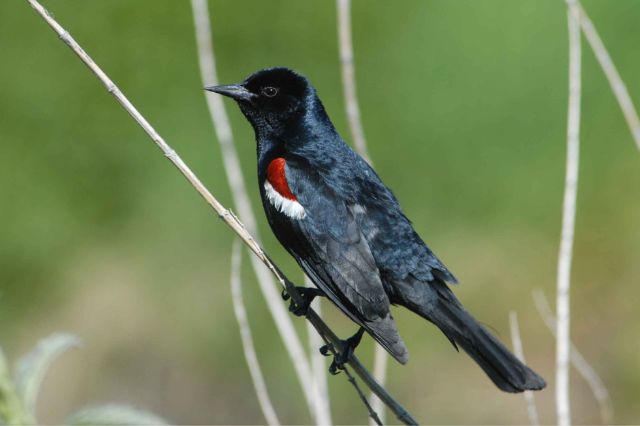 Coloration and identification: Tricolored blackbird males look almost the same as red-winged blackbirds. Males have glossy black plumage with a patch of white and reddish-orange on their wings.

On the other hand, females are not black and red birds; instead, they have brownish-black plumage with white striped underparts.

Distribution and habitat: Tricolored blackbirds are exclusive birds of California. They inhabit marshes as well as wetlands.

Nesting: Female tricolored blackbirds build their nest along water courses within thick bushes or vegetations. Nests might be built on the ground or 8 feet above. 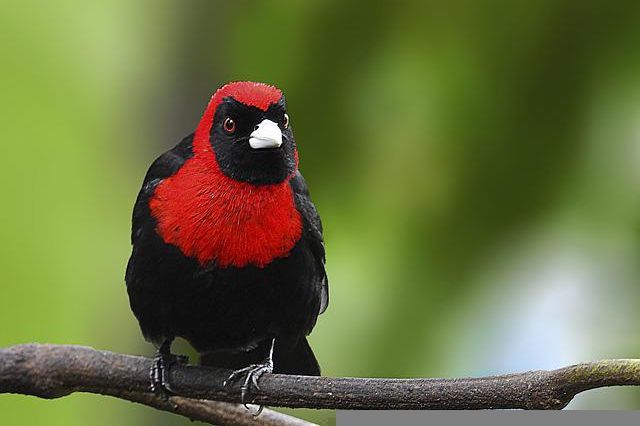 Coloration and identification: Crimson collared tanagers are boldly colored birds that can not be mistaken. These songbirds have jet black wings, tails, and, as their name implies, a bright red plumage around their shoulders, throat, and neck, resembling a collar.

Nesting: These songbirds build a well-hidden nest in the middle of trees in evergreen forests with water sources not too far from the location. Crimson collared tanagers that build nests by lakes and creeks use moss as part of nest-building materials. 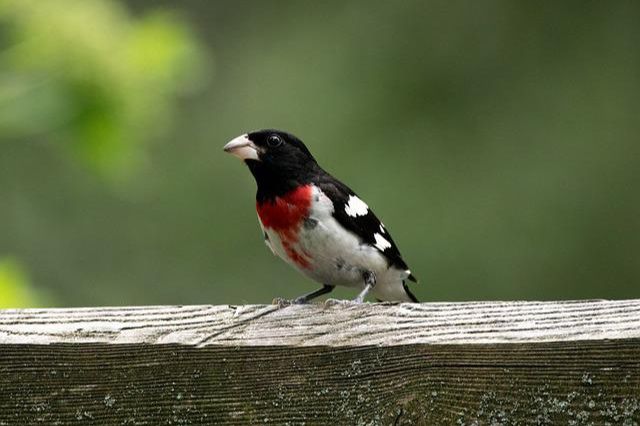 Coloration and identification: Rose-breasted grosbeaks are sexually dimorphic birds. Adult males are colored black on their heads, neck, back, and wings. Besides black, their wings also have white stripes. Their red breasts are read, and their underbelly is white.

In contrast, females do not have any red feathers. They have brown heads, backs, and wings, and their underbelly is white with brown stripes. Both sexes have pale beaks.

Distribution and habitat: Rose-breasted grosbeaks are widespread across the North American continent and some parts of South America. They are found in the United States, Canada, Mexico, Central America, the Caribbean, Venezuela, Peru, and Colombia.

Nesting: Nests are built in forks of a branch of a tree or shrubs 6 – 26 feet above the ground.

You May Also Like: Small White and Black Birds 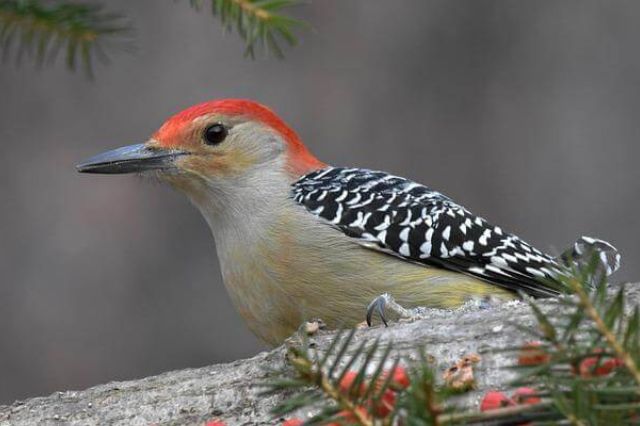 Coloration and identification: Both male and female red-bellied woodpeckers have the same colors on their plumage. They have a cream underbelly, black and white striped wings and back, and a patch of red feathers on the lower underside.

However, while the female’s back neck is a bright red color and the head is a grey color, male red-bellied woodpeckers have a red nape extending to the start of their beaks.

Distribution and habitat: Red-bellied woodpeckers are exclusive to the Eastern United States, only extending a bit into Canadian territory. They live in deciduous forests close to rivers and streams. You can also find them in plantations, gardens as well as parks.

Nesting: Male and female Red-bellied woodpeckers work together to build their nests. Males choose the site, excavate and show it to the female for approval. Females lay their eggs directly on leftover chips from excavation. Nest sites are usually 8 – 20 feet high in dead woods, trees, or poles.

Diet: Red-bellied woodpeckers are omnivorous birds that feed on insects, fruits, seeds as well as nuts. 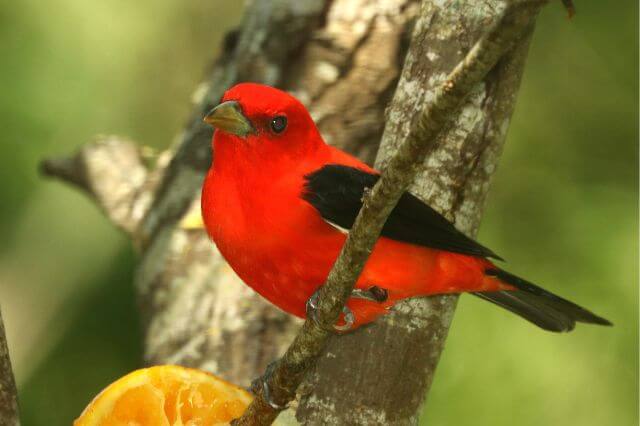 Coloration and identification: During the breeding season, a male Scarlet tanager has an all-red plumage, beady black eyes, black wings, and a tail.

Females have no red color. Instead, they have olive plumage. Males molt after breeding season to a plumage much like the females but with black wings.

Distribution and habitat: Scarlet tanagers live across Eastern North America, the Caribbean, and northwestern South America. In winter, they inhabit montane forests. But for the rest of the year, they inhabit woodlands, suburbs, parks, and gardens.

Nesting: Females build nests 20 – 30 feet above the ground at the edge of a horizontal deciduous tree branch.

Diet: These black and red birds are mainly insectivores, but they would occasionally eat berries and fruits. 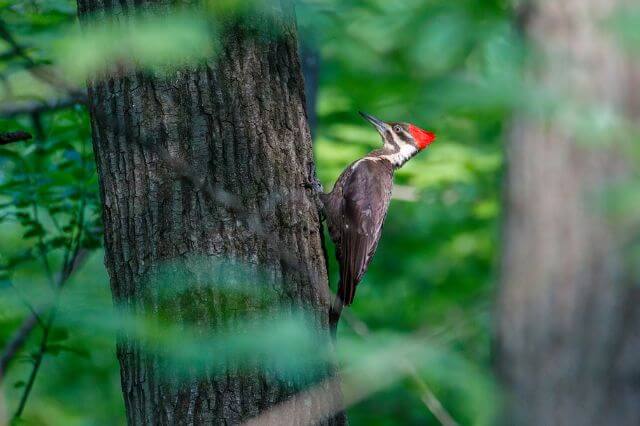 Coloration and identification: Pileated woodpeckers are fresh birds with black and white plumage. Their back, wings, and undersides are black. A white band demarcates the underside and upperside, snaking from the beak and crawling down under their wings.

Males have a tinge of red on the area before their beaks. The best feature of the pileated woodpecker is its red punk-styled crest.

Distribution and habitat: Pileated woodpeckers live all year round in southern Canada and the Western and Eastern United States. These birds prefer dense vegetation of tall trees and also parks that are heavily wooded. They do not tolerate shrublands.

Nesting: Pileated woodpeckers prefer to build their nest by excavating holes in a tall dead tree in a mature forest. Holes are usually 60 – 95 feet above the ground with two entrances.

Related: Birds That Are Blue and Yellow 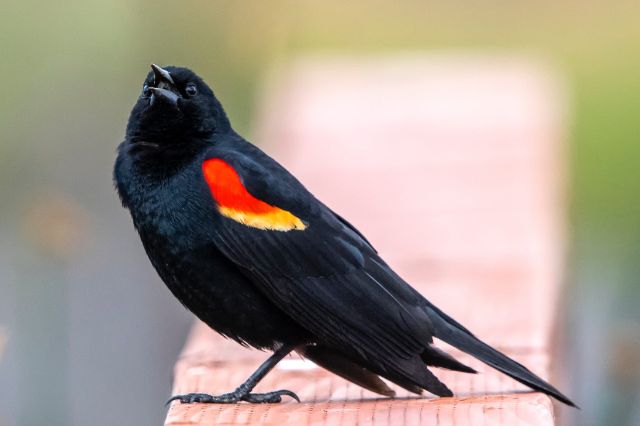 On the other hand, females are more sparrow-like with their brown and cream striped plumage.

Nesting: They build their nest in marshes or thick grasses in fields close to water sources. And because they build in lower elevations, their nest are placed vertically.

Diet: Red-winged blackbirds eat anything from seeds of grains, grasses, weeds, berries, and fruits to insects like grasshoppers. 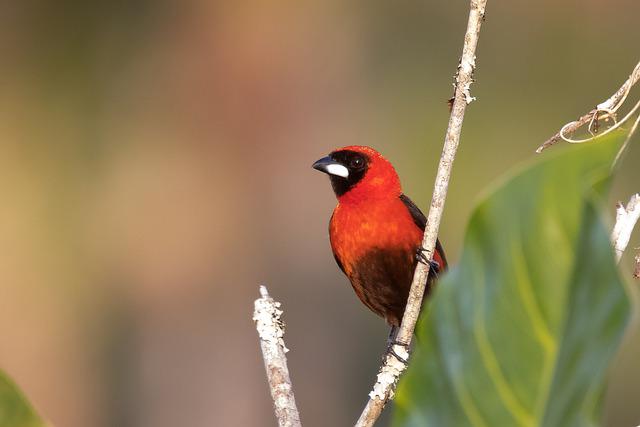 Coloration and identification: The masked crimson tanager is another beautiful black and red colored bird. Their plumage gives you the impression of a pet wearing clothes.

The top of their head, lower back, neck, breast, and flanks are a shouting red, while their upper back, lower underside, face, and wings are a glossy black color. Females have dirty brown plumage and a reddish-brown lower backside.

Nesting: They nest at the edges of oxbow lakes characteristic of the amazon.

Diet: Masked crimson tanagers are primarily frugivores. But they will occasionally eat some insects. 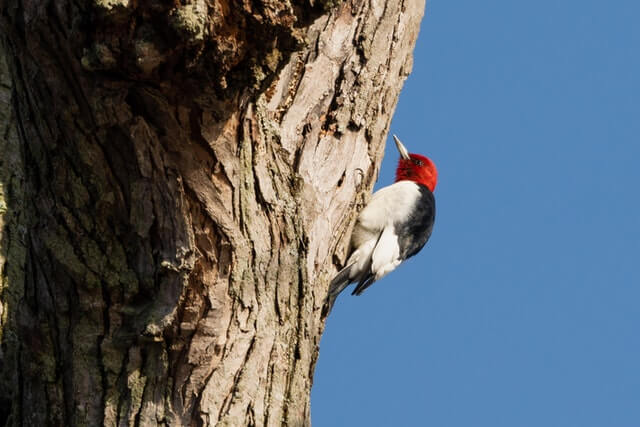 Coloration and identification: Red-headed woodpeckers have one of the most beautiful plumages on our list. These birds have a red head, neck, and throat. Their body is a brilliant white color. A red-headed woodpecker’s wing is a blue-black color with a white squarish patch at the wing ending.

Juveniles lack red and blue-black colors. Rather, they have a brownish-black head and a sprinkle of back on their neck.

Distribution and habitat: Red-headed woodpeckers are native to South East Canada and central and eastern parts of the United States. They live in grasslands with at least a handful of trees, orchards, clearings near forests, woodlands, orchards, along rivers, parks, suburb backyards, and open countries.

Nesting: Just like other woodpeckers, red-headed woodpeckers build their nest in holes they excavated from old trees. Nests are typically 23 – 39 feet above the ground.

Diet: Being omnivores, they eat anything from fruits, seeds, nuts, and berries to insects, eggs, and young of other birds. In winter, you might be lucky to have these beauties eat from your bird feeder. 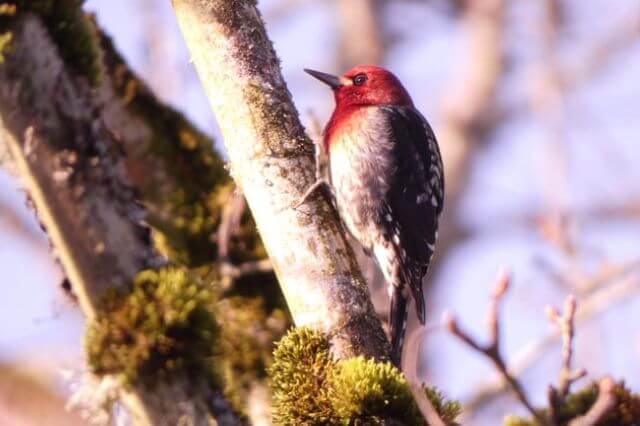 Coloration and identification: Red-breasted sapsuckers are another magnificently yet complex colored bird. Both sexes have a red patch of hair on their heads, breast, and necks.

Their underparts are white and extend in a single line to the top of their beaks. The wings are blueish black with a sprinkle of white.

Distribution and habitat: Red-breasted sapsuckers reside along the Western North American continent, stretching from the United States to Canada. In winter, they migrate to California and Baja California coastal areas, and for the rest of the year, they reside in coniferous forests and woodlands.

Nesting: Female and male Red-breasted sapsuckers excavate holes in deciduous trees and conifers that are either alive or dead. Their nests are usually at a 50 – 60 feet height. 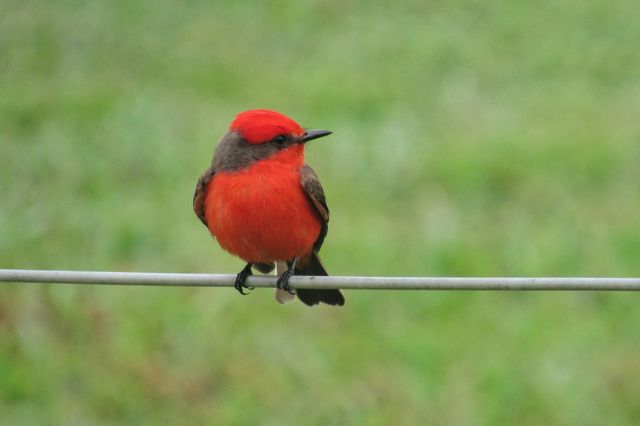 Colorations and identification: Adult male Vermillion flycatchers are flamy-looking red and black birds. This flycatcher’s plumage is a bright red and sometimes a reddish-orange with a black head patch and tails.

As is often the case with birds, female and juvenile flycatchers look different. They are dully colored with light brown plumage.

Nesting: Female Vermillion flycatchers build shallow nests made out of twigs and soft material lining 8 – 20 feet above the ground in the fork of trees.

Coloration and identification: We saved the best black and red bird for the end. Normally, Magnificent frigatebirds are glossy black birds with slender bodies. Their bills are long, slender, and hooked.

Male magnificent frigatebirds have a red pouch under their throats. However, when breeding season comes around, the once flattened sac will inflate – a show to impress the ladies and hopefully get a mate. The ladies have a white patch in place of the red sac.

Nesting: Female magnificent frigatebirds make nests at the top of low trees, coral reeds, in bushes on islands, and cays with mangroves 2 – 20 feet high. They might build their nest merely on the ground.

There are many black and red birds around the world, such as Northern cardinals, tricolored blackbirds, red-bellied woodpeckers, and vermilion flycatchers, among others.

With this, we conclude our list of thirteen red and black birds.

Thank you for reading. Hopefully, the next time you go birdwatching and see some of these magnificent birds in person, you’ll be able to recognize them with ease.

If you liked this article, here’s another popular bird piece: Largest Blue Birds.