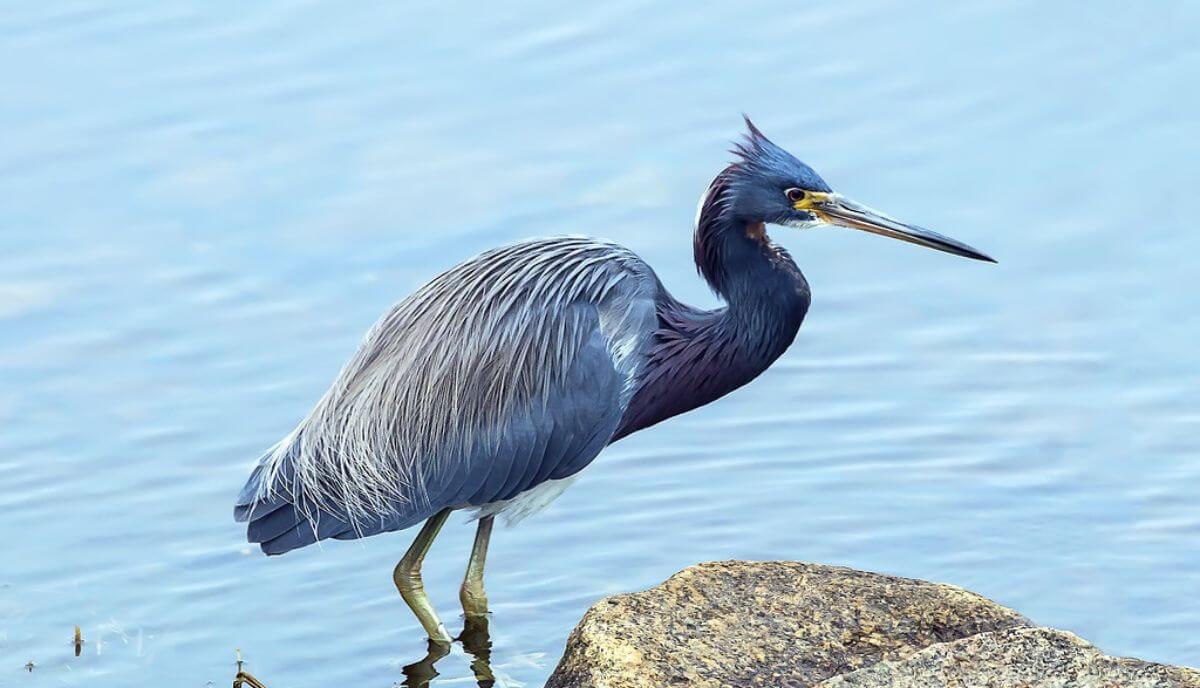 Are you a bird enthusiast who loves the birds and always enjoys learning more about them?

You are at the right place! We have decided to craft a text specially for these types of people. Those who appreciate nature are fascinated by the beauty of the wildlife.

In today’s article, we will look at a list of 8 birds with blue beaks. Their habitats, brief description, and some interesting facts!

To find out everything you need to know about these fantastic blue-beaked birds, read on! 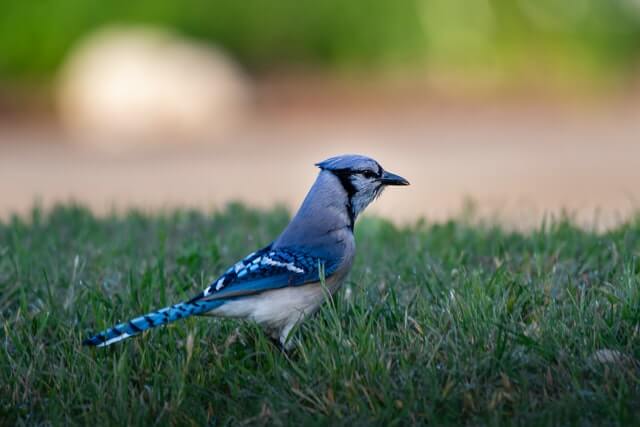 Colorations and Identification: Blue Jays, as their name suggests, have blue feathers above and white below around their stomach area. In addition, they have a black trail over their wings, forming beautiful color patterns. Around their neck, you can also spot black color, and it is in the form of a gorgeous necklace that unites the blue and white feathers.

Distribution and Habitat: Native to North America, the Blue Jay’s habitat is mixed forest across the territory of Florida and Ontario. The bird tends to fancy the dense forest. Thus, it is common to see it in diverse wood areas where it can enjoy various delicious foods. Preferred forests are home to oak, pine, hazel, and beech trees.

Nesting: Blue jays prefer to nest either in the crotch of the tree or an outer branch of the tree. Usually, the nest they build is about 10 to 20 feet from the ground. The materials they use are mainly sticks and twigs.

Fun Fact: An interesting fact about this bird is that they live a long life – the oldest one was almost 27 years old when it died! 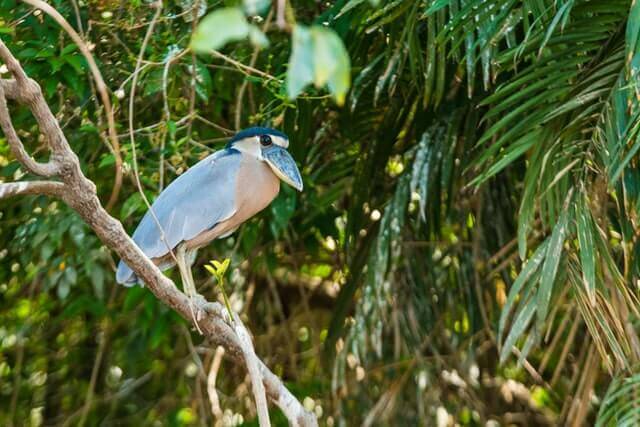 Colorations and Identification: The Boat-billed Heron’s coloration can vary between the birds but is relatively similar. For example, they have blue feathers on top of their heads, forming a crown-like image. The face and neck area are often white, and the back is silver ash-colored. In addition, the bird has a blue beak, black eyes, and pinkish or yellowish feathers on the chest area.

Distribution and Habitat: This bird’s favorite habitat is the mangrove swamps. The Boat-billed Heron lives in areas of southern Mexico, spreading out to Peru and even Brazil.

Nesting: These big blue birds usually nest in the trees, favoring this area, but it is not uncommon to see them build their homes in big bushes or on the ground in the swamp areas.

Diet: Their primary diet includes insects, fish, worms, crustaceans, and even some amphibians like frogs.

Fun Fact: The Boat-billed Heron is a nocturnal water bird. 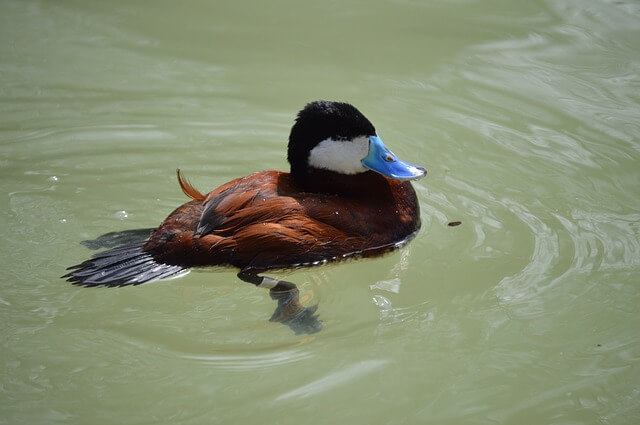 Colorations and Identification: Blue-billed ducks, as their name suggests are birds with blue beaks. The coloration of this bird is attractive. The males have deep chestnut colors almost over all of their bodies. Exceptions are the dark feathers around the head and the ones around the neck. Female blue-billed ducks have the same colors, but a darker tone makes them distinctive.

Distribution and Habitat: Blue-billed ducks are native to Australia. They are entirely aquatic animals and love to spend their time in the water. The favorite place of this bird is covered in vegetation damps of water where they can hide and rest. Aside from that, they spend time in flocks swimming in dams, lakes, and other big water basins.

Nesting: Being an aquatic bird who rarely spends time on land, the Blue-billed Duck builds its nest in densely vegetated areas, for example, in cumbungi.

Diet: Blue-billed ducks are omnivores, and their diet comes as a mixture of leaves, seeds, fruits, and various aquatic insects.

Fun Fact: These duck species are relatively quiet ones. The best chance to hear them is in the breeding season when they quack frequently and rapidly to communicate with each other. 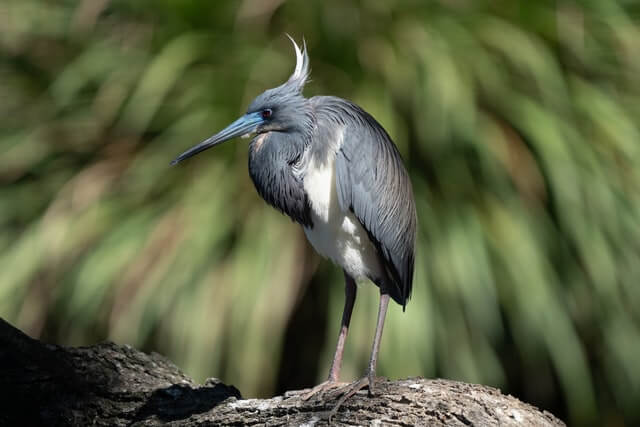 Colorations and Identification: As the name suggests, the Tricolored Heron is colorful compared to the other Heron bird. It has a back covered in blue to lavender feathers and white over its neck and chest area. Some birds can have a blue-gray covering which makes them pretty.

Distribution and Habitat: The habitat of this bird, similar to the other Heron subspecies, is near water sources. It prefers to live in swamps, streams, shores, and lakes. The Tricolored Heron tends to move once it’s in its breeding season. Around that time, its preferred location was near seashores or mangrove swamps.

Nesting: The Tricolored Heron’s nesting habits are kind of interesting. They are colonial birds and are often spotted nesting with other Herons. Unlike other aquatic birds, these herons nests inland in high-ground vegetation, bushes, or tall trees.

Diet: This bird tends to feed on fish as its main meal when it comes to its diet. However, it also loves to eat insects and some amphibians.

Fun Fact: Once they sense danger, Tricolored Herons camouflage themselves as a way of protection! 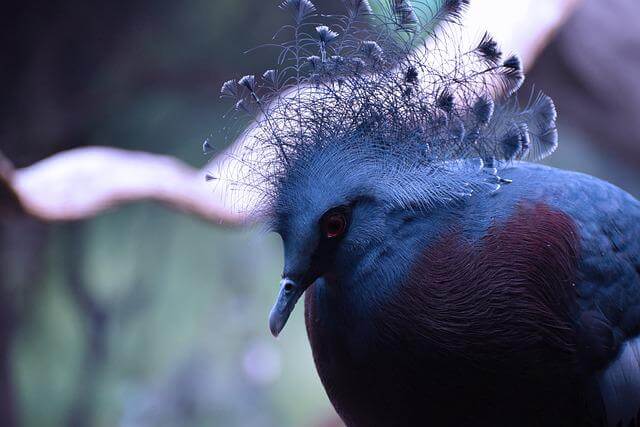 Colorations and Identification: The colors of this beautiful pigeon are blue-gray across all of its body. However, the face and the breasts of the pigeon are an exception. Victoria’s Crowned ones have dark mask faces and maroon-colored feathers on their chest, making them extremely attractive to the eye, especially with the white on the top crest on their heads.

Distribution and Habitat: This bird has fascinating origins as it originates from New Guinea. This hint that its habitat is usually tropical, which is its preferred environment. However, nowadays, the Victoria Crowned Pigeons are endangered and are due to their breeding in captivity during the ages; they can be seen mainly in ZOOs tropical sections.

Nesting: Victoria Crowned Pigeons love to nest high in the tree branches. They collect sticks, twigs, leaves, and stems by building small but robust nests 10 to 50 feet from the ground.

Fun Fact: Crowned Pigeons are the closest relative to the Dodo bird and are the largest pigeon species! 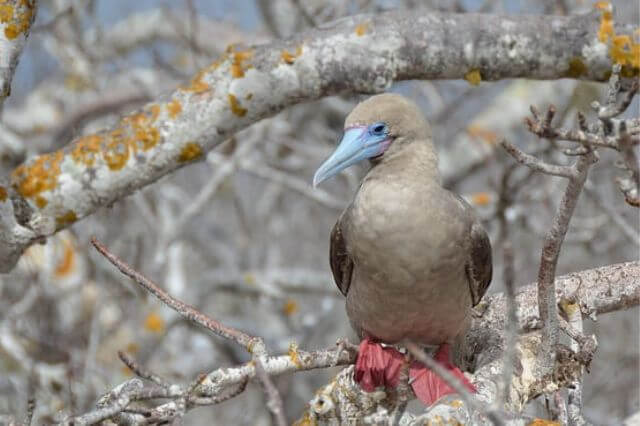 Colorations and Identification: The colorization of the Red-footed Booby is quite interesting. The bird has a blue beak, black and white feathers on its wings and body, a brown head, and brown with whitetails. And in addition,  its feet are colored red.

Distribution and Habitat: The Red-footed Booby is a bird that loves the tropical climate. That means it will inhabit islands with or without dense forests. It is like the tropical ones, near the sea. It is not uncommon to see birds around Florida or California coasts.

Nesting: These bird nesting habits are fascinating. It will nest in trees but not in the shade. The favorite place of this tropical animal is the sunny places. In cases where the bird lives on an island without trees, it will nest in the high grass on the land. The material they use is primarily twigs and various sticks they find.

Diet: When it comes to the diet of Boobies – they are born hunters. They fly slowly above the ocean and prey on fish and squids. They do not dive like other water-diving birds. Instead, they take the fish from the surface and directly swallow it!

Fun Fact: The booby part of its name comes from the Spanish “bobo,” which means fool. 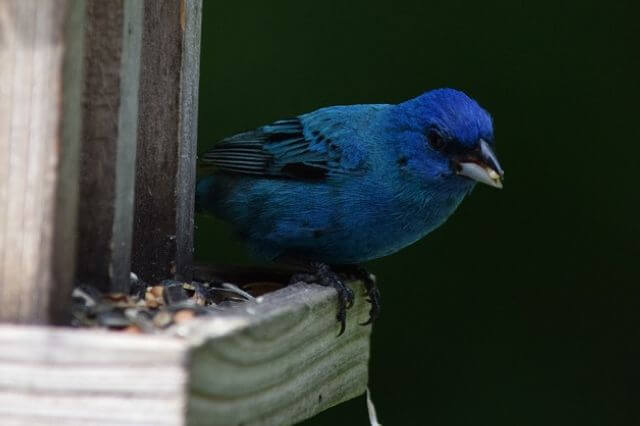 Colorations and Identification: Indigo Bunting males have blue feathers around their bodies with silver to grayish-colored beaks. The bird looks brilliantly blue due to a light trick; depending on how the sun’s light covers it, the color may be anything from indigo to light blue. Yet, that goes only for the male birds, the female has brownish feathering, and the color effects are not so prominent.

Distribution and Habitat: Indigo Bunting is a blue-beaked bird that loves to live in brushy and weedy areas. They usually habitat forests, canyons, fields, and places where new open spaces can pray for food. However, they do not fancy the dense woods.

Nesting: Their favorite habitat has a considerable role when it comes to their nesting. As Indigo Buntings do not live in dense forests and instead on their edges or in fields, you can expect them to nest in the open. The female bird usually finds a nice spot hidden in low vegetation and builds a nest there. The exact location of their home depends, but usually, it is not on the ground. It can be on the crotch of meeting brush branches or even on a corn plant in an open field.

Diet: The main diet of Indigo Buntings includes insects, seeds from the field, fruits, and buds.

Fun Fact: Indigo Buntings are natural singers, and they use a wide variety of songs to communicate with each other. 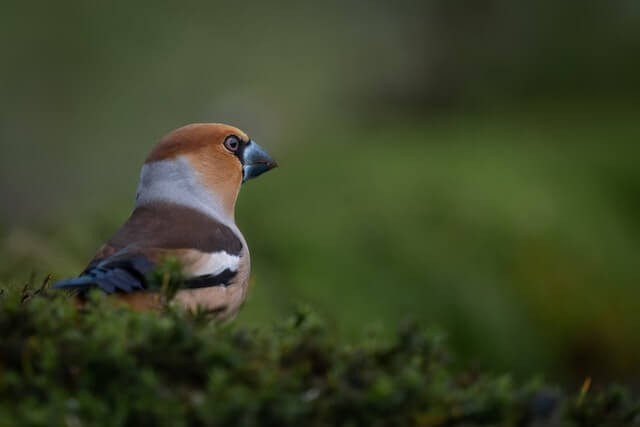 Colorations and Identification: Hawfinch is a unique bird with a big blue beak for its small body. The colorization of the bill depends on the season, it is black in the hot months and paler going blue and grayish in the winter. The colors of its feathers follow the same model. They are gray-bluish in the summer months and turn yellowish with brown around the wintertime.

Distribution and Habitat: This bird habitat is in the United Kingdom territory. It is not widely spread around the country but can be found in Kent, Wels, Gloucestershire, and Blean Woods. The favorite place of the Hawfinch is the dense woods with high trees in the local reserves where it can live peacefully!

Nesting: Nesting is one of the most critical events in this birdlife. Hawfinch loves the dense forest, and it is where they build their homes. Usually, they use sticks and twigs on the tree branches or in big bushes to make their nests.

Diet: The favorite meal of Hawfinches is seeds. They primarily eat tree and fruit seeds.

Fun Fact: Hawfinches can live double their life in captivity – about 20 years!

Hopefully, next time you go bird watching, you will be able to recognize these amazing birds.

This concludes our article on eight blue-beaked birds. Thank you for reading!

If you liked this post, here’s a recommendation of another popular read: Tiny Black and White Birds