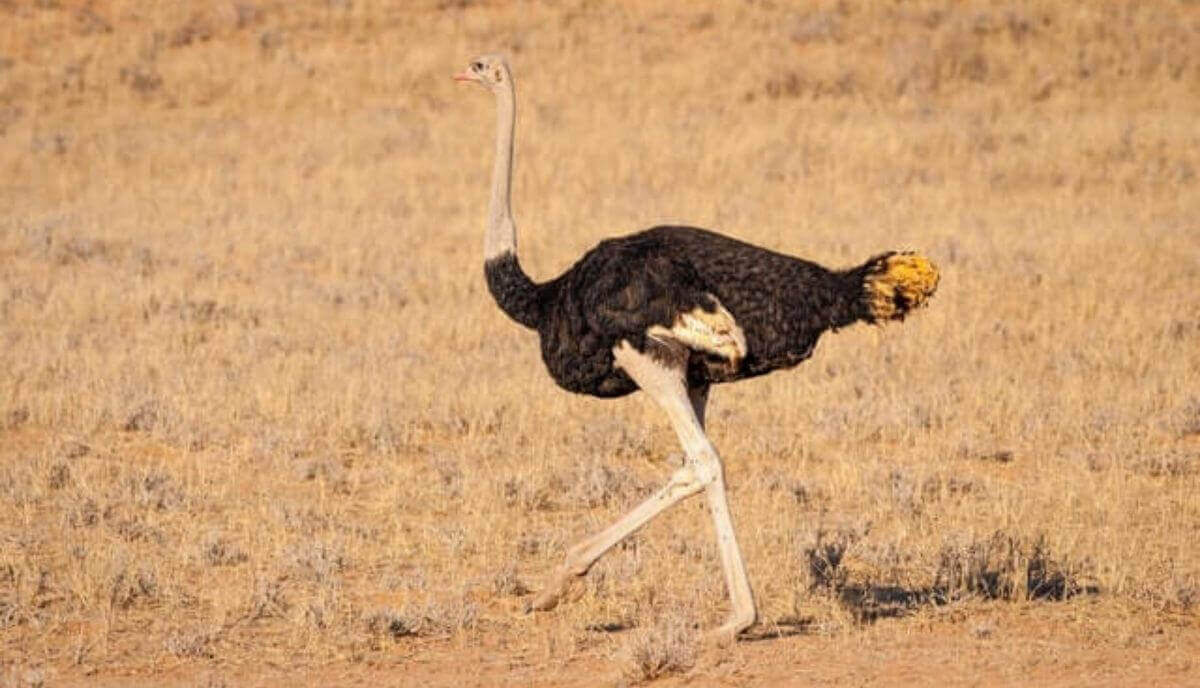 When we think of birds, we picture them flying at high speeds. However, some species of birds run, and they are some of the best runners in the wild.

Examples of birds that run fast include: ostriches, rheas, emus, roadrunners, cassowaries, among others. While many birds fly or swim, these birds run as their primary means of moving from one place to another. They have adapted to this such that they can achieve incredible speeds on their legs.

Ostriches are primarily found in the savannah grasslands of Africa, where many of them are domesticated, but there are a few in the wild. They are grouped as ratites alongside other animals such as rhea and kiwi.

This is the largest bird in the world since it can reach up to nine feet in height and weigh upwards of 300 pounds. It is a flightless bird and is known to be the fastest running bird on earth, seeing as it can run up to 45 miles per hour.

These agile animals have powerful legs that can support their entire body weight and helps when defending themselves. The kick of an ostrich is quite potent and can injure you badly.

They have a distinctive look with long necks and tall legs. Ostriches’ feathers are enormous, but they don’t play any part in their anatomy since they cannot fly. They make nests in which they lay eggs which are also the largest among all birds.

They are ratites, just like ostriches, which is no surprise that they share physical appearance. Like their cousins, these birds cannot fly but can run at a speed of up to 40 miles per hour.

They have large wings that help propel them forward faster and strong legs making them the second-fastest running birds.

Rheas live in groups even when domesticated and are quite protective of their space. Sometimes male rheas may become competitive during mating season; otherwise, this bird is not aggressive.

As you may know, chicken does not fly, making them quite the runner. A chicken can run at nine miles per hour for long distances, especially when getting away from predators. It is one of the fastest animals in its size, which is no more than a few pounds.

In some cases, chicken uses their wings to make them lighter hence run faster. However, they cannot fly very well.

Therefore, chicken wings are primarily helpful when getting down from high places and flying short distances. Usually, a chicken may run faster than most animals at home, such as some small dog breeds or other poultry.

This is a bird native to New Zealand. It is usually brown and grey and about the size of a chicken. Weka bird resembles the kiwi, so they are often mistaken for the other. Unfortunately, it was hunted by New Zealanders for years, so there are not many left.

Weka bird is mainly known for its loud and unique call that both males and females engage in like a duet.

It is a mischievous bird known for stealing food and occasionally shiny things. They are not picky eaters, so they eat most things they can find, from seeds to nuts and even fruit.

They are flightless birds that can run to speeds of up to 12 miles per hour. Weka birds run in short spurts when they are calm, but they can run for long distances if needed. For instance – when getting away from predators, such as cats, dogs, and ferrets.

This is a group of 46 bird species of ground birds found in parts of Central and South America. They are mostly small in size and are usually confused for quail and partridge, but some differences set them apart.

Tinamou birds are not fully flightless; they can fly over short distances when escaping predators or going down from high places. However, they prefer walking to flying and can run to around 10 miles per hour.

Tinamous are primarily found in forests, but they also inhabit open spaces. Due to their dark to grey color, they can blend into most places; keeping themselves away from predators.

This fruit-eating animal is mainly found in Australia and the islands that surround it. It is a heavyweight bird and is second to the ostrich in that class. It is one of the scariest birds known for their attacks people and other animals fiercely.

One of the reasons the cassowary is so dangerous is due to its sharp claws that can reach four inches in length. Their claws are found only on the middle toe of every foot, so it is a specialized killing machine.  When attacking, they will go claw first to injure their aggressor.

The cassowary is quite a colorful bird with its feathers looking like beautiful fur capes, and it also has a unique helmet made of keratin.

Another unique characteristic of the cassowary is that they are excellent swimmers and will often go in the water to escape predators. However, these birds run at speeds of up to 30 miles per hour, so it is not easy to catch them.

The roadrunner is a quite distinctive bird with its slender body that is black and brown with a white streak that runs across. In addition, it has a unique head crest with long, strong legs and a large dark bill.

Other than the average roadrunner, there is a lesser one, that is not as big and has a smaller bill.

Roadrunners are primarily ground birds, but they can fly over short distances and go up high points such as small trees. They belong to the cuckoo family of birds with zygodactyl feet, which means they have two toes in the front and back.

These birds can run fast at 20 miles per hour. They use a combination of running and flying when escaping from predators.

Another flightless bird that runs is the Guam rail. Found in the United States, this bird is also known as Ko’ko’ bird. It is a relatively small bird measuring around 11 inches tall.

The Guam rail has a small compressed body, especially in the neck and breast areas which helps it move pretty fast in small steps.

This is why it can run up to 15 miles per hour in short streaks. In addition, they have a unique screeching call that is quite loud and can be identified from long distances.

This tiny bird primarily uses this call to respond to loud noises, other disturbances, and calls from other birds.

Another bird that is unable to fly but can run pretty fast is the South Island Takahe. This is a medium size bird that is native to New Zealand. It is mostly terrestrial and is excellent at hiding itself from predators.

Despite this, it is quite a colorful bird with green-blue feathers and a red bill. This is why it mostly hides in the forest bushes.

While it prefers hiding, it can run up to 13 miles per hour. It also has an excellent lifespan of around 20 years. There are not many of them left on earth, so it is in danger of extinction

The last members on our list of birds that run fast are emus. After their relatives, the ostriches, emus are the second-largest birds on the planet, with an average height of 5.7 feet.

Emus also belong to the group of flightless birds and are native forests, woodland, and sand plains of Australia.

These giant birds are equipped with powerful legs and can reach the high speed of running (31 miles per hour). They are also known to be quite enduring birds that can travel very long distances.

Most flightless and semi-flightless are birds that run. In fact, as you’ve had the chance to see, some of them are quite fast runners. They have this adaptation mostly to escape from predators such as the famous roadrunner and the coyote.

Unfortunately, many of these running birds are close to extinct due to being hunted by humans; hence, there is a need to conserve them.

Thank you for reading. Hopefully, you have learned something new today about these speedy birds.

If you liked this article, we recommend you a similar post: Can Birds Swim?