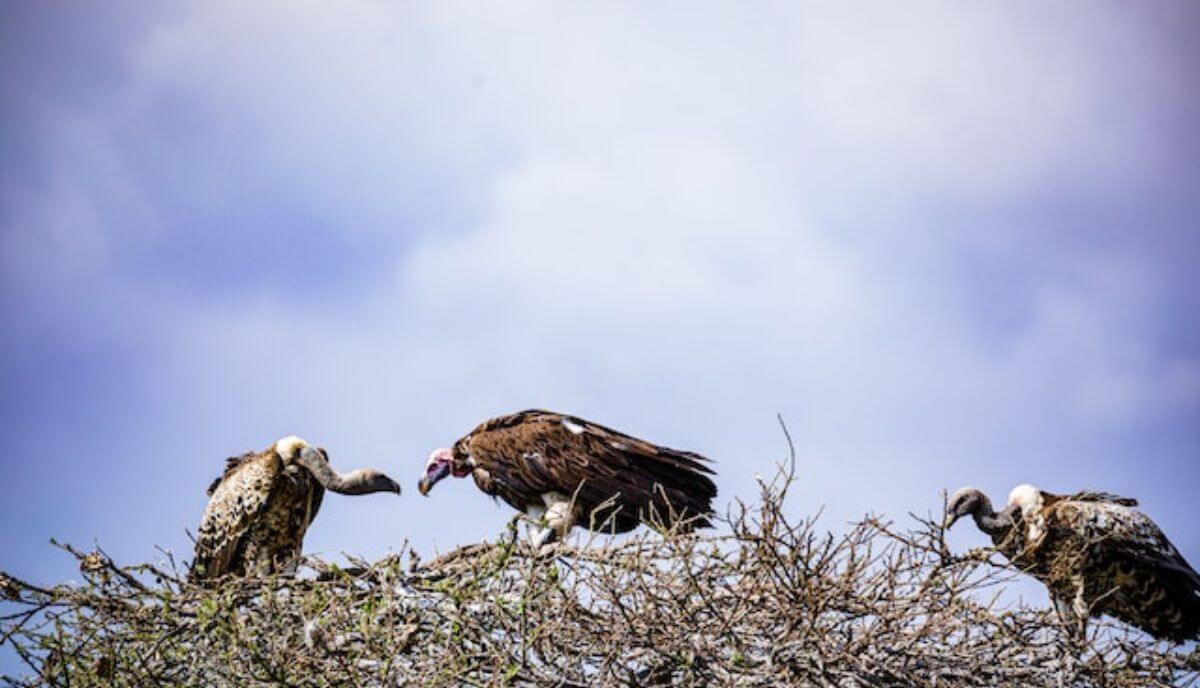 Known for its beautiful landscapes and spectacular mountains, North Carolina is a perfect place for bird-watching lovers.

One of America’s richest avian territories, this state is home to 486 species, according to the North Carolina Bird Records Committee.

Among all of them, below are listed 13 birds of prey that you can find in North Carolina.

13 Birds of Prey in North Carolina 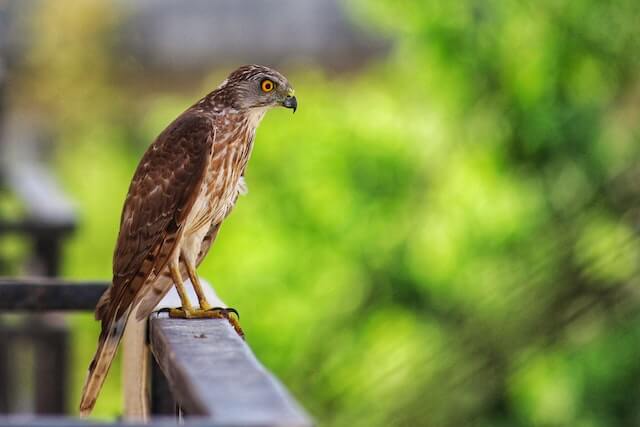 The first raptor bird on our list that you could find in North Carolina is the red-tailed hawk. Due to its large breeding range, it is one of North America’s most commonly seen birds of prey.

These birds breed north of the United States borders, though they inhabit the entire continent, including North Carolina.

As one of the most common aviators, they can be spotted throughout the state year-round. They seem to have no preference for the environment they inhabit, and can be seen in urban areas, deserts, forests, and agricultural fields.

The bird itself is pretty easy to identify – it is brown on the top, pale on the bottom, with a striking red tail by which they’re named.

As for their diets, red-tailed hawks are highly opportunistic carnivores, which means that they aren’t picky when it comes to prey. They will eat small mammals such as rodents, reptiles such as lizards and snakes, and even larger birds. 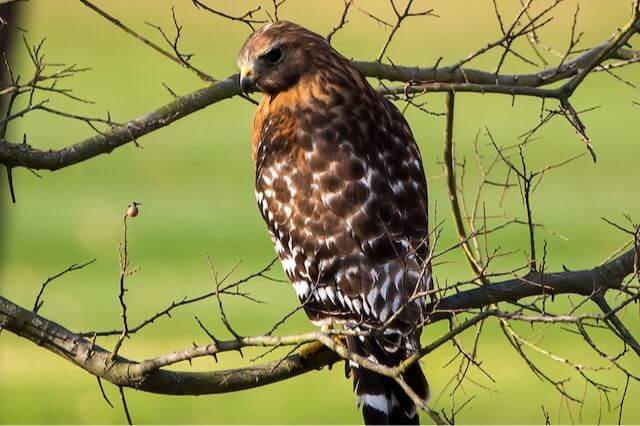 As the name suggests, the next raptor on our list is easily identified by its red shoulders – the red-shouldered hawk. They are often confused with the aforementioned red-tailed hawk, though this bird of prey is significantly smaller.

Like its red-tailed companion, these birds can be seen year-round in North Carolina, choosing to go north to breed and south to winter.

Unfortunately, the biggest threat to these beautiful birds is deforestation. They tend to live in open forests with plenty of opportunities to hunt. Sometimes they can be spotted in the suburbs if there are trees around.

Their diet mostly consists of rodents like mice, gophers, and chipmunks. However, like most other hawks, they occasionally feed on reptiles and other birds. 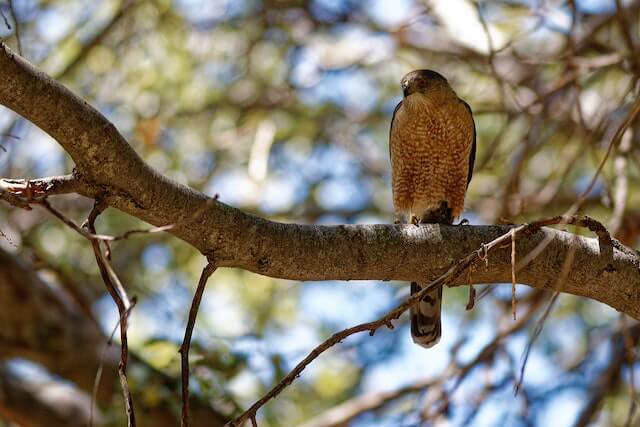 The tiniest hawk species and one of the smallest birds of prey in North Carolina, the sharp-shinned hawk, with a wingspan of up to 23 inches and an average weight of just 4oz.

As is the case with most raptors, the female is larger than the male. You can spot this hawk throughout the Americas by remembering its long tail, short wings, and slender legs that named them – and they live in North Carolina year-round.

Sharp-shinned hawks live in dense forests, especially during the breeding season. However, at other times, they can be found in open forests and even the suburbs.

As they often feed on smaller birds, they can be spotted near birdfeeders, where they wait for prey.

Speaking of prey, these raptors usually hunt sparrows, warbles, wrens, and other songbirds. However, if needed, they will also feast on rodents and reptiles. 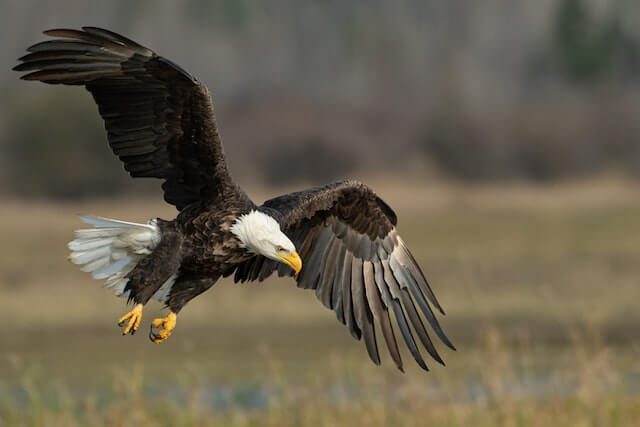 As the national bird of the United States, the bald eagle requires little introduction. It lives in the entire North American continent, including Canada, Alaska, the US, and Mexico.

In North Carolina, the famous eagle species can be found near large bodies of water, such as Jordan and Fall lakes.

The bald eagle is easily recognizable. Despite its name, it is not actually bald, but it has a very distinguishable feature – a white head.

On top of that, this bird has dark brown feathers, a white tail, and strong, menacing talons. With a huge wingspan, this gorgeous raptor is difficult to miss!

Since this powerful eagle can be found around water, it’s no surprise that fish comprise the biggest part of its diet. Apart from fish, the bald eagle will feed on other birds, turtles, snakes, and small mammals. 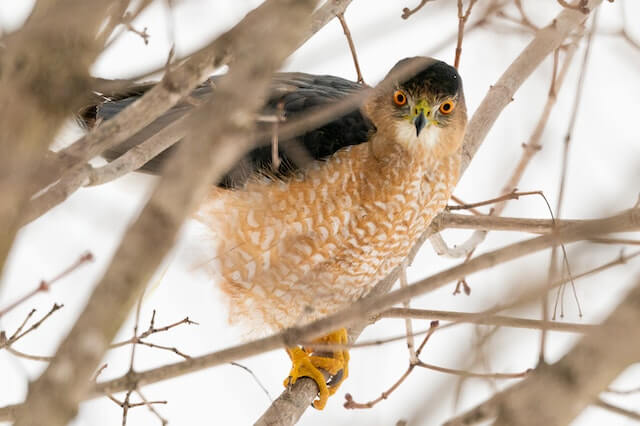 The Cooper’s hawk can be found throughout the country. Its habitat ranges from southern Canada all the way to Mexico, and they are very common birds of prey found in NC.

Although the bird breeds in the north and migrates in the south, it is found in North Carolina year-round, making birdwatching enthusiasts very happy.

To spot this mid-sized raptor, look around dense forests and open woodlands, but also around birdfeeders – where this creature’s prey often resides.

Studies show that Cooper’s hawk is very adaptable to new habitats. As a result, it’s possible to spot this bird even in urbanized areas of the country.

This bird of prey has previously been described as “bloodthirsty .”It is a very aggressive predator, feeding on other birds such as pigeons, jays, and robins. In addition, the bird is known to eat small mammals, such as chipmunks, squirrels, mice, and even bats.

You May Also Like: Black and White Bird Species in Michigan 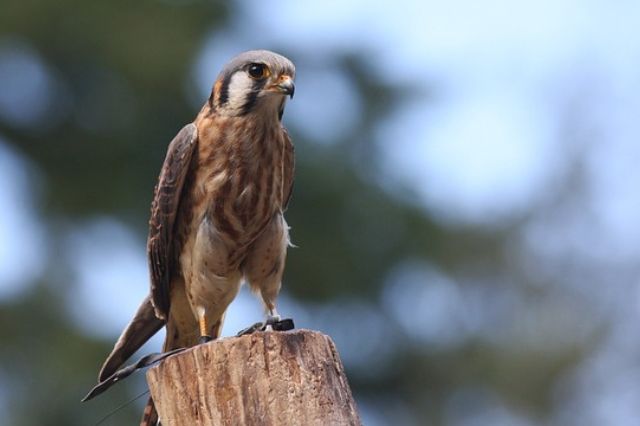 The American kestrel is the smallest bird of prey in North Carolina. Also known as the sparrow hawk, this animal is also the smallest falcon in the USA – it is usually 9 inches long and weighs only 4oz on average.

It has an extensive distribution as this raptor can be found in Canada, the US, Mexico, throughout South America, and even in Western Europe!

Despite its tiny stature, this bird of prey is an efficient hunter. Its typical diet consists of insects such as grasshoppers, beetles, butterflies, and moths.

However, they are opportunistic carnivores, and they will also eat rodents and other small birds (such as sparrows).

Much like its diet, the habitat of an American kestrel is also varied. These birds can be found in urban areas, deserts, trees, agricultural fields, etc. If you’re looking for one, you can often see them on powerlines, looking for prey. 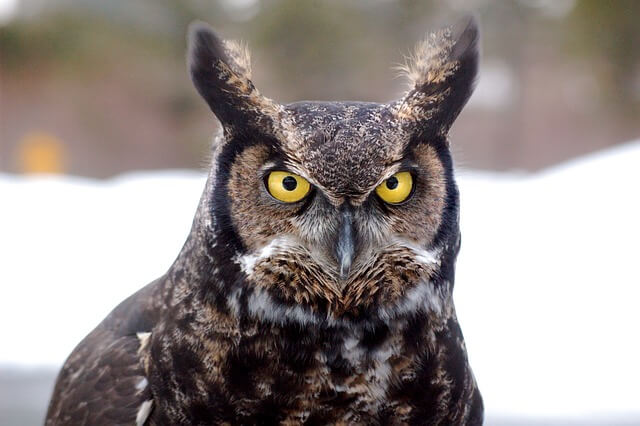 This bird of prey has numerous names, including the great horned owl, the hoot owl, and the tiger owl.

Great horned owls are easily recognizable due to their striking yellow eyes and ear-like tufts at the top of their heads, while their gray-brown body colors are well suited for camouflage.

Residing throughout North and South America, you can often see this raptor in North Carolina (except during winter).

Great horned owls are adaptable birds, both in their distribution and diet. They can be found in deserts, forests, swamps, and wetlands, but also in urban areas, cities, and backyards.

Their varied diet includes mice, rabbits, squirrels, possums, and skunks, among many others. Although it has a strong preference for mammals, if none are available, this raptor is known to feast on birds, reptiles, fish, and insects. 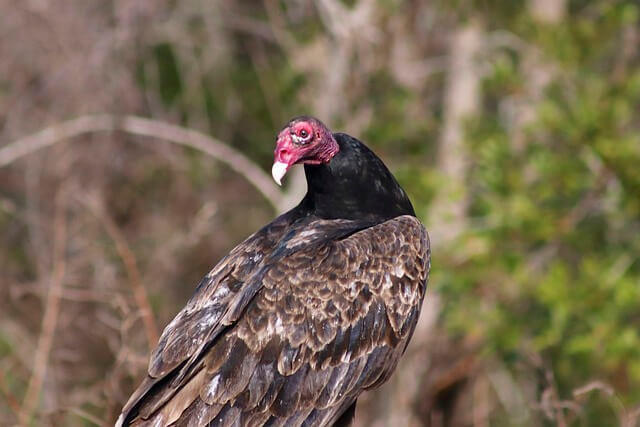 The well-known Turkey vulture can be found in North Carolina year-round. It inhabits all types of terrain, including forests, deserts, and pastures.

As the name suggests, this raptor resembles a wild turkey due to its bald head and dark plumage. It’s been suggested that vultures are bald to keep clean easier when they eat.

Speaking of feeding, these birds of prey have a typical vulture-like diet – they feed exclusively on carrion. Carrion is the dead, decaying flesh of animals.

Unlike most other birds of prey, vultures do not kill their prey – they scavenge for it with their great sense of smell. They are also immune to many illnesses usually caused by eating carrion, such as salmonella and botulism. 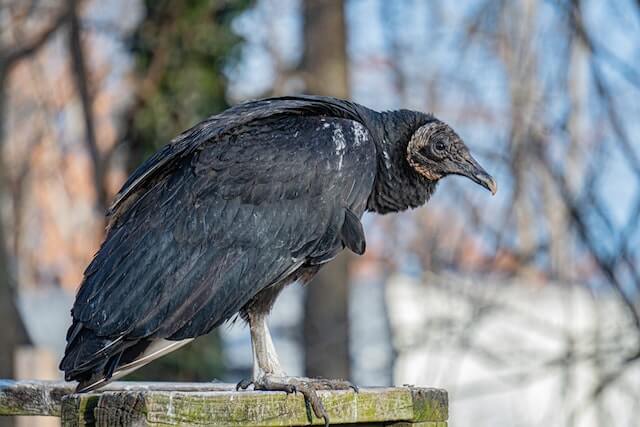 Although somewhat similar to the Turkey vulture, the black vulture is much more menacing.

The usual diet of black vultures consists of carrion. Still, unlike their turkey-like counterpart, black vultures sometimes hunt and kill their prey, including livestock, deer, skunks, possums, turtles, and other birds.

Like many other species members, the black vulture is immune to numerous toxins produced by the rotting corpse of its prey.

The scary yet intriguing bird can be found throughout the country of North Carolina year-round. It’s easy to spot, with a relatively long wingspan of morethan 5 feet, jet-black feathers, and a grey head.

Black vultures tend to nest in forests, though they can be seen in urban areas as well, rummaging through garbage. 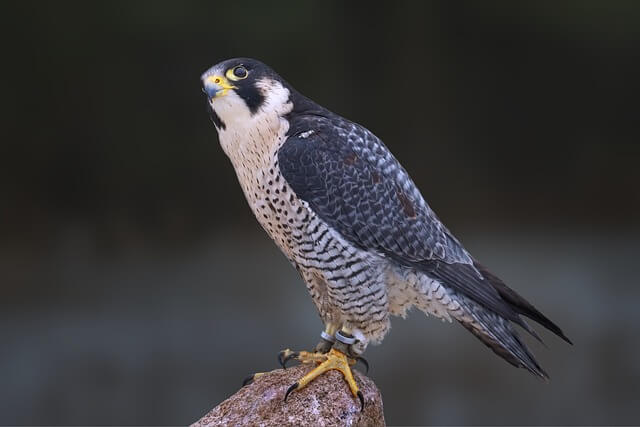 Did you know that the peregrine falcon is one of the world’s most common birds of prey? They can be found on all continents (except Antarctica), and you can spot one in your neighborhood in North Carolina.

As the fastest animal in the world, this fascinating bird can reach a mind-blowing speed of almost 250 miles per hour!

Not only is the peregrine falcon an efficient hunter, preying on ducks, gulls, pigeons, and bats, but it is also very adaptable to its surroundings.

As a result, you can spot these anywhere: in urban areas, mountains, forests, deserts, and coastlines.

Unfortunately, these birds of prey are somewhat rare in North Carolina. They can only be seen in winter and late fall. 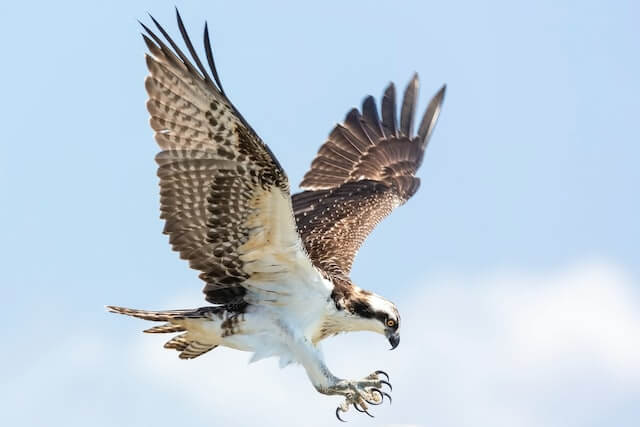 The osprey feeds almost exclusively on fish. Consequently, it is usually found near large bodies of water with sufficient prey.

In North Carolina, this bird can be spotted in spring and summer around the coastal plain. It is easy to identify, with dark brown wings and white feathers on its underside.

As mentioned, fish makes up most of this bird’s diet, up to 99%. As a result, it’s classified as piscivorous, and its sight is adapted to seeing underwater from above.

The skillful bird kills by swiftly diving into the waters, sometimes submerging itself completely to catch its prey. 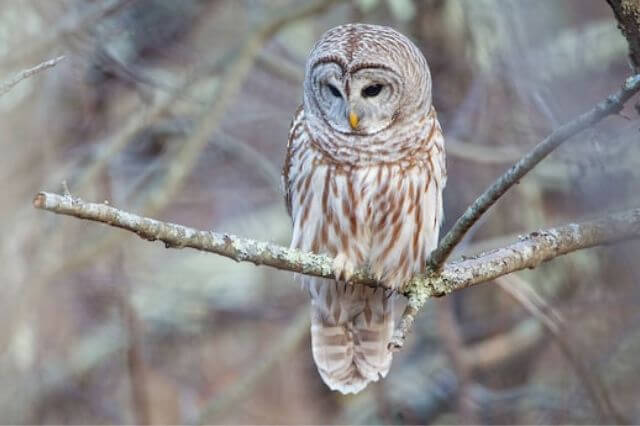 This beautiful owl got its name from its feathers’ pattern, alternating light brown and dark brown colors. It’s easy to spot and can be seen in the east of North Carolina during the breeding season.

The barred owl prefers dense forests and can be spotted around woodlands and wooded swamps. They usually nest in the natural holes of the trees.

So, the next time you see a tree at night (since barred owls are nocturnal) – keep your eyes wide open if you want to see this alluring creature!

As for food, the bird of prey feeds on small mammals, such as chipmunks, mice, weasels, squirrels, and rabbits. They are also known to eat reptiles, amphibians, and other birds.

On the other hand, the barred owl is prey to the great horned owl, as discussed earlier! 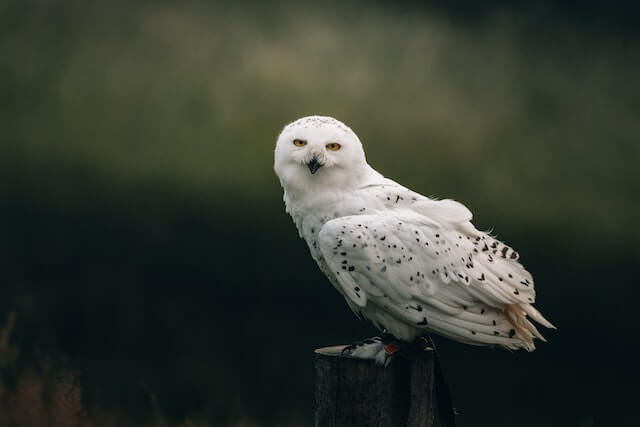 Perhaps the most appealing bird on our list, the snowy owl, is also known as the Arctic owl, the polar owl, and the white owl.

The bird is predominantly white and can easily be confused with a lump of snow. Its striking yellow eyes, in addition to its white plumage, make it a magnificent specimen.

During migration, the snowy owl can be spotted in North Carolina. They migrate from late October all the way until April.

On top of that, if you are committed to spotting a snowy owl in the wild – the highest chances are at dusk and dawn when it is most active.

Snowy owls usually live in open areas with very few trees and can be found sitting on power lines, searching for their next victim.

And there you have it. With this, we conclude our list of birds of prey in North Carolina.

Some of the most common raptor birds that can be spotted in North Carolina are red-tailed hawks and peregrine falcons. However, if you are a consistent birdwatcher, you’ll probably be able to see most of these fantastic avian species.

Thank you for reading. If you liked this article, here’s another popular bird topic: Rare Birds in Ohio.