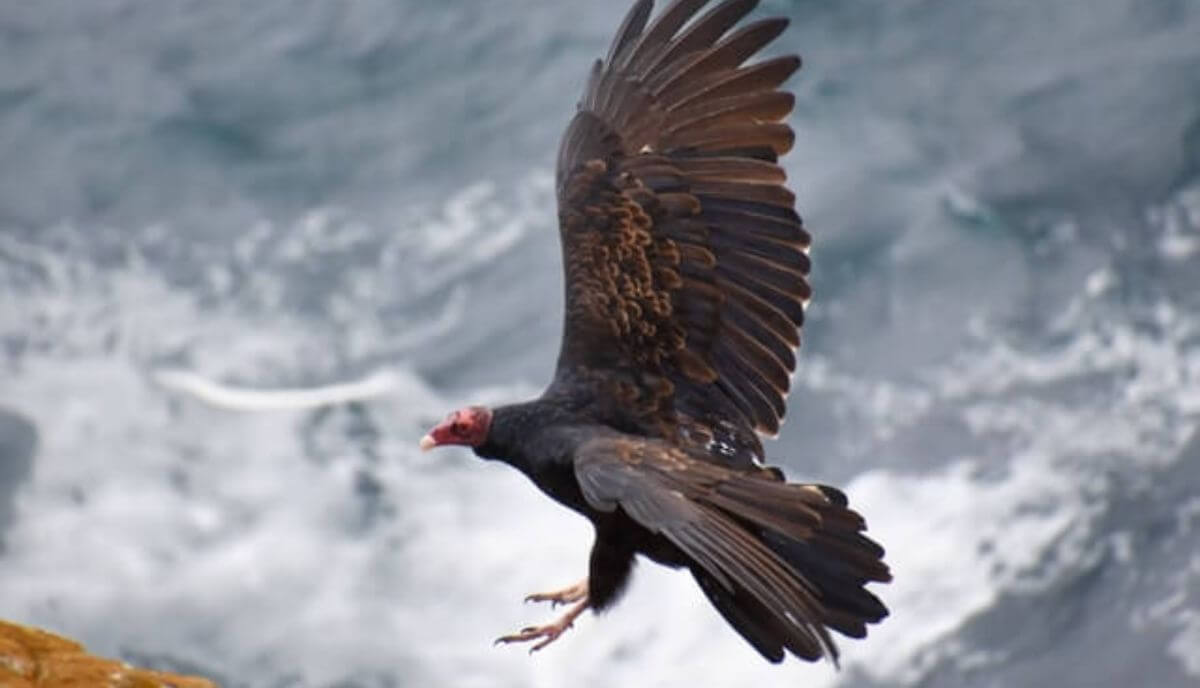 California is by far one of the most visited states in the United States of America, thanks to its many beaches, amusement parks, and natural wonders.

But apart from the usual attractions, California boasts a wide range of bird wildlife.

When next you’re in there, here’s a list of big birds in California you might happen to see or…have already. 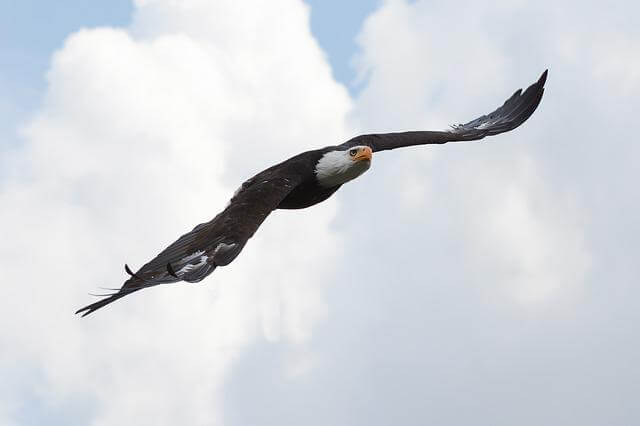 Colorations and Identifications: A bald eagle’s plumage varies according to the respective stages of development. Adult bald eagles have white heads and under tails, a mixture of black and brown bodies and wings, and a bright yellow beak. But the farther you go down the development stages, the darker their head and beaks get. A bald eagle about a year old has completely dark-brown plumage and a black beak.

Distribution and Habitat: Bald eagles are native to parts of Canada, Mexico, and the U.S. They are found around coasts, rivers, lakes, reservoirs, and wetlands. Ideally, these coastal regions and wetlands have old trees and an abundance of seafood-like fish.

Nesting: These sea birds nest in large tall trees like pine and redwoods. A bald eagle’s nest is usually situated at the top one-third layer of its tree of choice, about 55 – 125 feet high. But bald eagles can settle for heights as low as 20 feet when they find themselves in habitats like swamps. The tree species does not matter as long as it can bear the weight of their usually large nests.

Diet: Bald eagles are very strong birds and successful hunters with a wide range of prey covering over 400 species. However, their diet consists mainly of fish, followed closely by other birds and mammals. 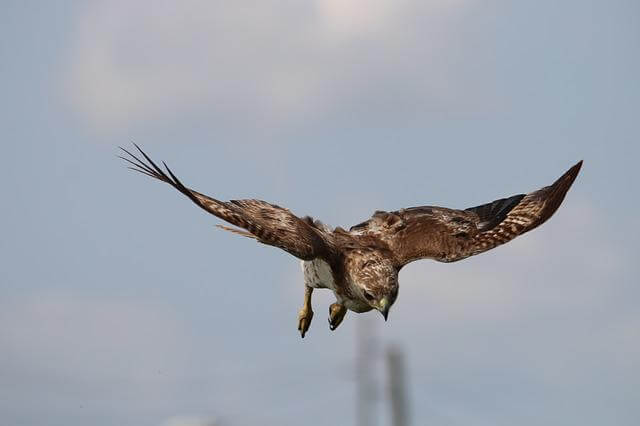 Colorations and Identifications: Red-tailed hawks are the largest of the Hawk family. These raptor birds have varying colors of plumage according to their regions. In California, red-tailed hawks have a darker shade of color. From the top of their head, along their tailbacks is covered in brownish-black feathers with hints of dull red. These birds of prey have a white and black spotted underbelly and, as their name implies, a red tail. Their red-colored tail can be seen in all their glory when they are in flight.

Distribution and Habitat: Red-tailed hawks span most of the North American continent and some parts of Central America. They can be found all over the U.S, Alaska, Canada, Mexico, Costa Rica, and a majority of the Caribbean islands. Although red-tailed hawks are famed for surviving in just any habitat, they prefer to set camp in fields, woodlands, and mixed forests with many canopies. However, they can also be seen in urban areas.

Nesting: Red-tailed hawks love to nest in the crown of tall trees in the canopy-rich forest. The tree would be much more preferred if it had a nice view of the ground where they’ll spend time hunting. These big birds of California can be seen in the countryside hovering over fields or perched on posts. If these posts are high enough, they might build their nests there. 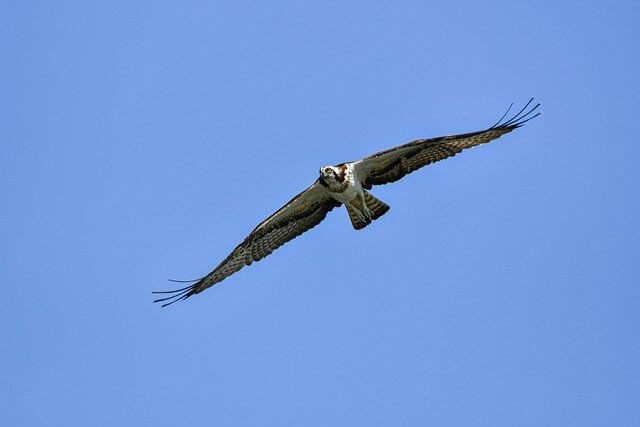 Colorations and Identifications: Huge migratory birds, ospreys, are easily identified by their large size and plumage. An osprey is covered in black feathers from the eye patch surrounding its eyes to its tails. They have immaculately white feathers on their neck, breast, and belly – a band of light brown feathers across their breast. Juveniles, however, may have black dots on their white feathers.

Distribution and Habitat: Ospreys are widespread across every continent except Antarctica. They spend their winter in southern North America, all through South America, and they are quite popular big birds in California. More often than not, ospreys span temperate and tropical regions of these continents.

Nesting: Wherever is safe, open, and has a water source for drinking and hunting is the ideal spot for Ospreys to nest. They build their nest on any tall structure, whether natural or man-made.

Diet: An osprey’s diet consists almost entirely of fish. Although barely, the fish-loving birds can substitute reptiles and mammals for fish. 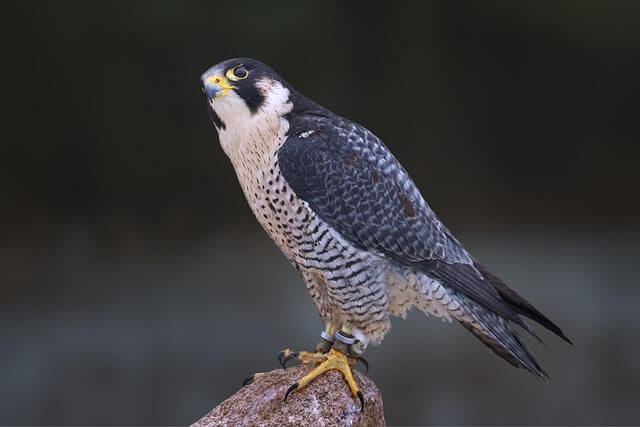 Colorations and Identifications: Peregrine falcons are colored almost the same as ospreys. However, they have less dense white feathers and black and white stripes on their underbelly and legs. The brown band across the neck is absent, and instead, a v-shaped white plumage sits on its chest and stretches to the neck. Their head, wings, and tails are black-colored.

Distribution and Habitat: Peregrine falcons are one of the most widespread birds in the world. In California and other temperate regions, they are all-year-round residents and usually live in high mountains and some tropical rainforests. Yet, these falcons can also be spotted in urban areas like streets and parks.

Nesting: Peregrine falcons prefer calm sites to build their nest. Therefore they choose to nest mainly in cliff ledges about 1,300 feet high. But they may also nest in tall trees and buildings, provided it is quiet.

Diet: Peregrine falcons are carnivores. Primarily, they feed on a wide range of birds. But they may also eat some small-sized mammals, insects, and rarely, carrion. 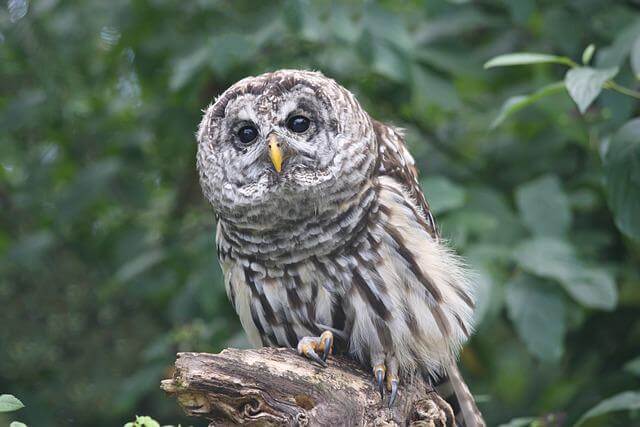 Colorations and Identifications: Great gray owls have complex markings and colors like tigers. Their plumage is a mixture of white and gray colors, hence their name. Both eyes of a great gray owl-like other owls are embedded in two large discs. Rings of white, gray, and black colors surround each disc, and a single black stripe demarcates the two discs.

Distribution and Habitat: Great gray owls are native to some countries in the northern hemisphere – the U.S, Canada, Alaska, Russia, Finland, Kazakhstan, Mongolia, and China. In California, they habit mixed oak woodlands and open areas. Although they live in the Northern hemisphere, they can withstand the heat of about 100°F (30°C).

Nesting: Great gray owls are somewhat lazy birds. They would rather reuse abandoned nests of common ravens or other raptors 2,000 – 9000 feet high up in coniferous trees.

You May Also Like: Small Gray Birds With White Bellies 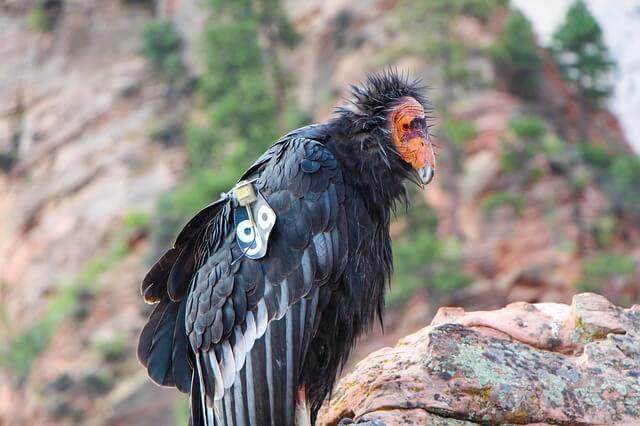 Colorations and Identifications: California condors are the largest birds in California. These enormous new world vultures have a rich black plumage with white feathers underneath their wings. In addition, a Californian condor has a bare yellowish-orange head and a long pinkish neck.

Distribution and Habitat: Regardless of the name, these big Californian birds are (besides California) native to Utah, Arizona, and Baja California in Mexico. They reside in rocky shrublands, coniferous forests, and oak savanna.

Nesting: California condors nest in caves and large crevices in cliffs of mountains up to 6,000 feet tall. 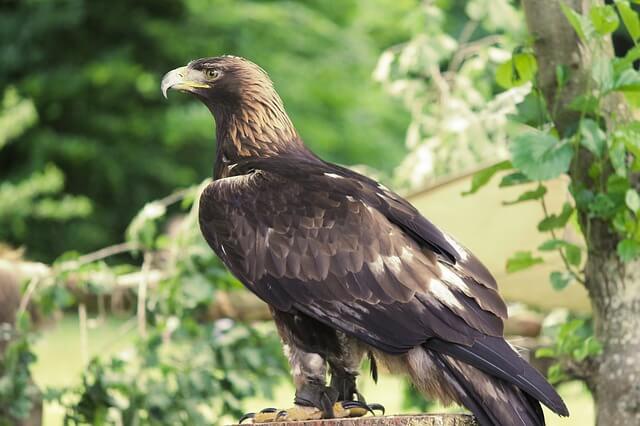 Colorations and Identifications: Adult golden eagles have a dark brown plumage on their body and a hint of gold on their head and neck. Young eagles, however, have a white color band on their tail and the edge of their wings. These eagle species are recognized as one of the fastest and most powerful raptors in entier North America.

Distribution and Habitat: Golden eagles are migratory birds found in most of Eurasia, the U.S, Canada, and sparsely in North-Eastern Africa. They reside in mountainous and coastal regions in California.

Nesting: Golden eagles usually nest in sites with a broad view for hunting. They build their nest on cliffs and sometimes on secluded man-made towers like an observation towers.

Diet: Like all birds of prey, golden eagles are carnivores. They feed on small mammals like prairie dogs, squirrels, rabbits, other medium-sized birds, reptiles, and fish. Golden eagles are bold enough to hunt large animals like coyotes. However, even though they are the fastest eagles, golden eagles are, according to Wikipedia, only about 20 percent successful most of the time. 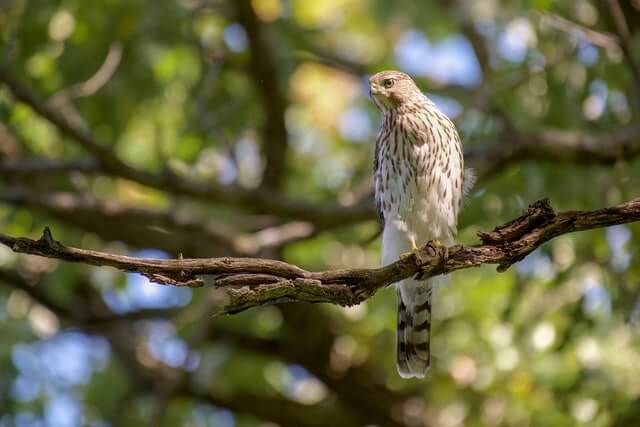 Distribution and Habitat: In winter, most rough-legged hawks habit marshes and prairies of North America and the tundra of Eurasia. These hawks migrate from Alaska to Canada and the U.S on the North American continent and Russia down to the Middle region of Eurasia.

Nesting: Rough-legged buzzards are animals that nest as high as 1,320 feet on top of trees and cliff ledges. Their nests are made of unique materials like sticks, straws, and even bones. 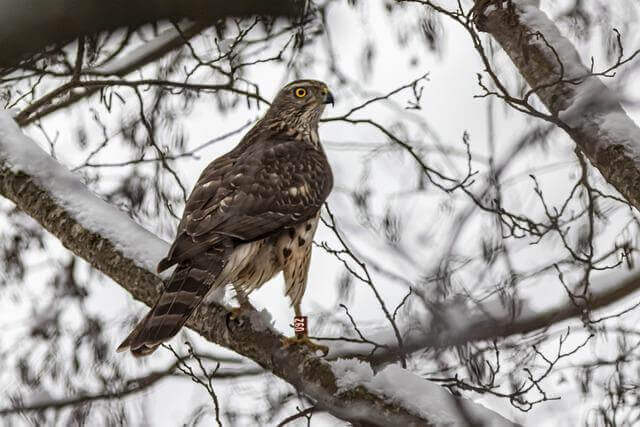 Colorations and Identifications: Northern goshawks have a distinctive pattern associated with hawks. They have horizontal striped black and gray underbellies and a crown-like stripe of white feathers around their head. A brown-black color is from their head down to the back of their tails.

Distribution and Habitat: Northern goshawks are both Eurasian and North American residents. They prefer mountainous forests filled with coniferous trees. In California, they are found in the major mountains of Northern Ventura County.

Nesting: Northern goshawks nest in large tree trunk areas. It sometimes finds itself along slopes. They can build up to nine nests but may use and defend only one.

Diet: Northern goshawk primary feed on small, medium, and large birds. They occasionally substitute this for fish, amphibians, reptiles, and some invertebrates. 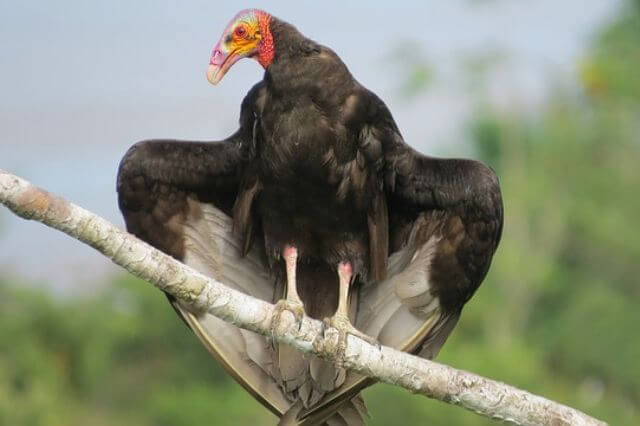 Colorations and Identifications: The turkey vulture is another big bird in California, characterized by having brown-black plumage and white streaks under its flight feathers. As usual with all vultures, turkey vultures have bare necks and bald heads, while their beaks are pale.

Distribution and Habitat: These vultures are migratory birds found in The U.S, Mexico, and practically the entire continent of South America. They live in low-elevation mountains, rangelands, and farmlands. They do not favor high grounds as well as urban areas.

Nesting: Turkey vultures do not make nests like typical birds. Instead, they lay their eggs and care for them on the bare grounds of caves, crevices, fallen logs, or even abandoned buildings.

Diet: As typical scavengers, turkey vultures feed mainly on carrion, carcass, and human garbage. They rarely, if ever, go hunting.