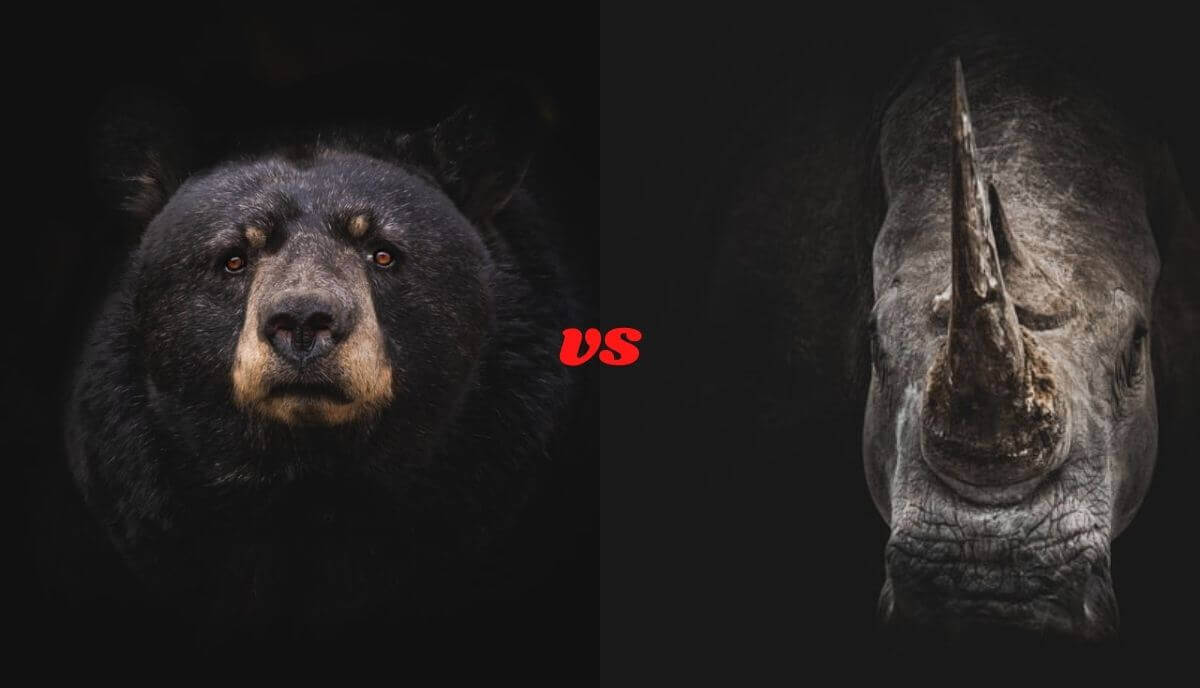 A night out with friends can bring many interesting discussions. After a few drinks, people start talking about “what if” questions that can’t be answered. Often we start chatting about animal strength, which usually ends up with the debates about who would win this or that animal.

And this topic is one of those. Before we get started, I want to point out that the question of who would win in a fight between bear vs rhino is not a straightforward task. These two animals do not share the same habitats, so this fight is based on predictions.

Bears, unlike popular belief are not ravenous; they are usually shy but not solitary, and their behavior is quite predictable. It is their intense sense of smell that helps them gather all the necessary information about the world around them.

While their ability to smell is highly sensitive, bears also have an amazing hearing ability. These are curious animals, and standing on their hind legs is a sign of their curiosity, to inspect things, odors, and noises.

One of the most fascinating characteristics of bears is their intelligence. In fact, they are known to be the most intelligent animals in North America. Some scientists go even further and claim that the level of intelligence of a bear is equivalent to those of a 3-year-old child.

Rhinos are highly torpid and solitary (unlike bears!) animals of the wild. They usually own a large territory and are often found grazing, drinking, and wallowing in the mud. Rhinos love wallowing so much that they are known to spend even up to 8 hours a day during the monsoon season doing just that.

When they sense danger, these animals tend to run away, making a peculiar huffing sound, and they most definitely charge when alarmed.

Black rhinos, in particular, are known to be extremely aggressive and carry a bad temperament. Though rhinos fighting with other animals is a rare incident, they do fight with themselves quite frequently, which could be why a group of rhinos was named ‘crash’ in the first place.

On the intelligence front, rhinos, even the largest of them, usually have small brains, weighing just over a pound. So, in terms of intelligence, rhinos, do not overpower bears.

Bears are of eight different species – Brown bears, Asiatic black (or Moon bears), Polar bears, Sloth bears, North American black bears, Sun bears, and Spectacled bears. The smallest of these happens to be the Sun bear, which can be as small as 4 feet in height and just around 60 pounds in weight.

The largest of all the eight species would be the polar bear, growing to reach up to 10 feet in height and over 1500 pounds in weight.

Rhinos, depending on the species – Sumatran, Javan, Greater One-horned, Black, and White – rhinos different in their height and weight. In general, their height can range anywhere between 3 feet and 10 feet, with Sumatran rhinos being the smallest, usually from 3 to 5 feet tall, and weighing between 500 and 960 kg. (approx. 1100 to 2100 pounds).

When it comes to bears, the strongest of the 8 species happen to be polar bears and grizzly bears. While the former species does have amazing strength elements, like powerful paws, razor-sharp teeth, etc., the chances of them coming face-to-face with rhinos are pretty much zero. Therefore, in our context, grizzly bears have a bite force of 1200 psi, which gives them enough strength to easily bring down prey, and they can be five times stronger than a human.

With their size and weight, rhinos have enough power to easily derail a train. These animals also have the ability to run at a speed of over 30 miles per hour, despite their huge size, and they can change direction quickly as well. Also, though they are herbivores and munch only on vegetation, their bite force is unfathomable, at 1100 psi, mighty close to that of bears.

Bears are capable of running at a speed of more than 35 miles an hour, and they can maintain their pace on any type of land, including along a slope. Their huge and muscular legs do an excellent job of making them propel forward at such speeds for an extended period.

In terms of endurance, there are several incidents documented in the past that make evident that bears have great endurance as well.

As far as endurance is concerned, it is safe to say that these animals lack the same.

Bears, like many other animals, have a critical space, which is basically an area around them that they are likely to defend and don’t want other animals or humans to enter. When their critical space is compromised, bears respond by either running away or being aggressive.

As rhinos are nearsighted, they have a reputation to get irked easily, and therefore, when they feel provoked, they will charge. Rhinos use their horns as a medium of defense against predators, and when they do charge, they wouldn’t hesitate to use the same to impale their opponent.

Bear vs Rhino – Who Would Win?

Considering the natural habitats of both species, seeing a fight between the two is close to none. Bears live in North and South America, Europe, and Asia, while rhinos are found in Africa.

Now, this would be a tough fight, but in a potential brawl, rhinos would win. Both are large animals and have several aspects in their favor. But, ultimately, when it comes down to a battle, rhinos tend to have a higher chance of winning. Yes, bears have powerful paws with killer claws, but it would take hundreds, if not thousands, of thrashes before the rhino goes down.

Even though bears have the advantage in most key factors that would usually determine the winner between the two animals of a similar size, hippos are just too big for bears.

And that is it. If you liked this kind of article, I recommend you to read also – Elephant Vs Bear.