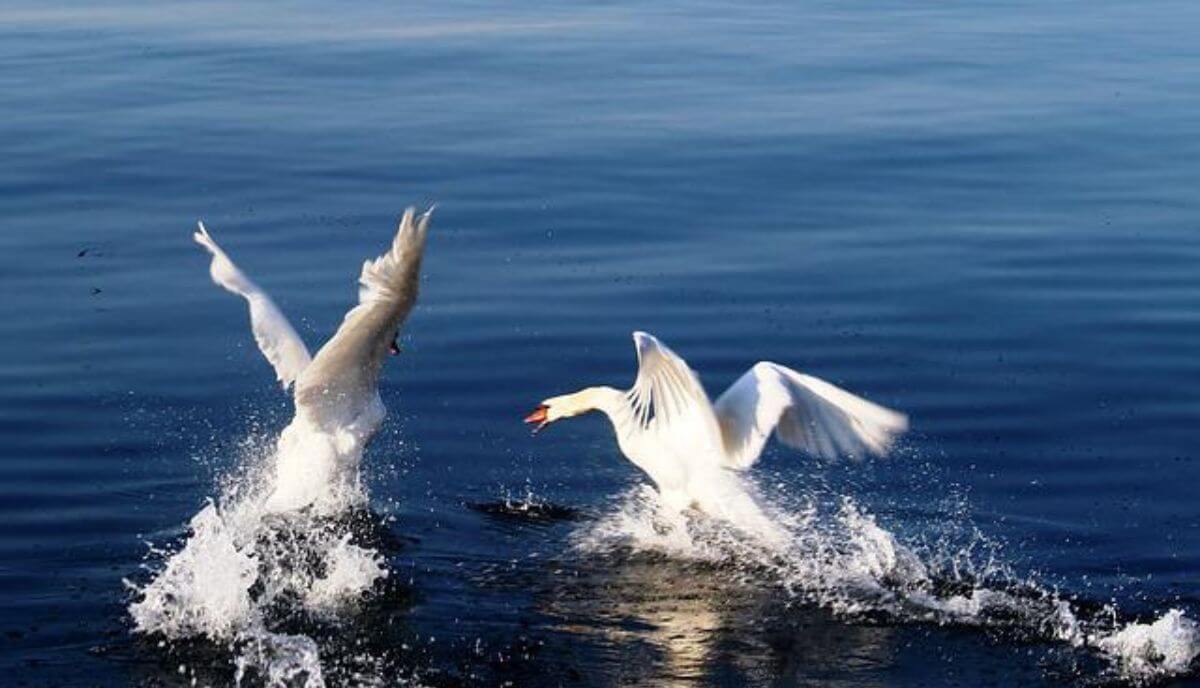 Swans are often associated with serenity, grace, and poise. But if you’ve ever wondered if swans are dangerous, we’ve got the answer for you.

Swans are usually not dangerous to humans; however, they may become hostile and potentially aggressive if you approach their nest or threaten their chicks. Before displaying aggressive behavior, swans indicate their anger by hissing and flapping their wings.

Stick with us if you want to learn more about what makes swans potentially dangerous, how they attack people, and what to do if you find yourself being attacked by one.

Yes, swans could be aggressive if you come too close to their nest where their younglings are. Once their eggs are hatched, swans become very protective, staying close to their family and defending them from any danger.

So, it’s best to keep away from their nest, which is often situated along a river bank. Those seen as intruders include land mammals, wildfowl, and humans.

They may ward off invaders using aggressive fast swimming as they busk and hiss in addition to curving their necks back and raising their wings halfway. Swans usually protect their younglings in pairs and, more often than not, use their wings’ power to attack rather than their beaks.

Although cases of people being severely injured by swans are extremely rare, there have been cases of swan attacks, as confirmed by John Faaborg, the president of the American Ornithologists’ Union and a biologist at the University of Missouri.

In addition, experts with years of experience handling swans explained that it was a myth that these birds can break a human’s leg or arm (given that they have never injured them beyond bruising).

The signs to note of a potential swan attack include:

When you see these with a swan, it means that the bird is angry, and you should retreat.

Related: Are Ostriches Dangerous To Humans?

Usually, swans do not attack humans, but it does happen sporadically. Nesting swans may decide to launch an attack on humans who invade their territory. Also, there have been several cases of kayakers and canoeists being attacked by swans.

Swans are large semi-aquatic birds that are not so much fearful of humans. And even though swans will almost never attack without reason, they will not be afraid to strike in order to defend themselves.

Since the population of swans keeps increasing, more conflict cases between them and people are being recorded.

As a result, every year, there have been reports of people being attacked by swans on shore and watercraft.

Can Swans Hurt You?

Swans can potentially hurt a person, but most swan attacks on humans end up with minor or no injuries. Also, swans are no predators, so they’ll remain peaceful if you don’t approach their territory. It’s best to admire these beautiful birds from a distance.

Most cases of swans hurting people occur when they are antagonized. As mentioned earlier, swan injuries are less severe through biting or pecking than when the bird hits you with its wing joint.

However, there are always exceptions.

Mr. Asbo is one male swan in the U.K. whose name was derived from the misdemeanor of having inappropriate behavior. Mr. Asbo was infamous for attacking rowers along the river Cam in England in April 2010 (source).

The bird’s attacking technique, known as ‘drone style,’ injured several people. Locals were so afraid of the creature that a marshal was hired during a student rowing race to ensure that Mr. Asbo didn’t harm anyone.

After a few years of Mr. Asbo’s reign of terror, he was relocated to a new rower-free habitat and had his wings clipped. He has since not attacked anyone.

A wildlife professional claimed that Mr. Asbo felt threatened by the rowers in the narrow Cam river.

There was another aggressive swan who terrorized English rowers in 2014. Known as Asbaby, the swan would also fly into river-goers, pursue watercraft and bite chain-link fences.

Asbaby became a tourist attraction, with people flocking to see his clever tricks and take snaps. Asbaby is the newest generation of aggressive swans who continue the legacy of Mr. Asbo.

Can Swans Kill You?

It’s uncommon for a swan to attack to the point of killing someone, but in the heat of the moment, when they feel threatened and choose to charge, things could spur out of control super-fast. For instance, if a swan attacks a watercraft, the impact of its wings could overturn the boat.

On April 18th, 2012, a swan attacked a man named Anthony Hensley, a 37-year-old father of two. The man went kayaking in a river just outside Chicago. During his kayaking, the bird presumably felt threatened and defended his nest when Hensley got too close.

The swan’s attack was too violent that the vessel capsized.

Unfortunately, it was difficult for Hensley to swim to shore because he was heavily clothed, and the giant bird was unrelenting.

Eventually, exhaustion set in, and he drowned. According to witnesses, the swan intentionally blocked Hensley from getting to shore.

What to do if a Swan Attacks You?

If you’ve identified all the aggression signs listed above and you suspect a swan is charging at you, the first thing to note is never run away.

Your first instinct would be to run away from danger but never do this under a swan attack. They take this as a sign of aggression.

Instead, back away slowly, and if the bird bites, smacks, or whacks you, seek medical assistance immediately.

Equally important, if a swan threateningly charges at you, hold your arms over your head to make yourself appear larger and hiss back. You may also stomp your feet forward in small steps to intimidate them.

While doing so, walk backward slowly. You are probably near the nest, and the best way to diffuse the situation is to get out of there.

Here are tips on how to stay safe when touring swan territory:

Yes. Black swans are known for being more aggressive to humans than their white relatives. Like white swans, these black birds become hostile when humans invade their sacred space, and their attack technique is quite similar to their white cousins.

Yes, swans can bite. The bite force of swans is not as strong as in other animals, but their sharp beaks can inflict damage. Swans don’t have teeth, but their bills are serrated with edges that look like small sharp teeth. A bite from a swan’s large bill can quickly draw blood.

Are Geese or Swans More Dangerous?

Swans are often more violent and dangerous than geese. The only two significant human fatalities caused by waterfowl in the U.S. are attributed to swans. In other words, swans might kill you, but geese won’t. However, geese can also be dangerous to humans under certain circumstances.

To sum up, swans may not be what you see in movies. On-screen, you see them curled together, with their long slender necks forming a love shape, making you go like “aaaawww!” But in reality, swans are potentially dangerous waterfowl.

However, in 90% of cases, swans attack in self-defense to protect their nest when someone comes too close. So, always keep a safe distance to avoid a swan attack and remember to apply the protection techniques listed above.

We hope this post has helped you know more about these beautiful semi-aquatic birds.

Thank you for reading. If you liked this article, here’s another recommended piece on a similar topic: How Dangerous Are Seagulls?