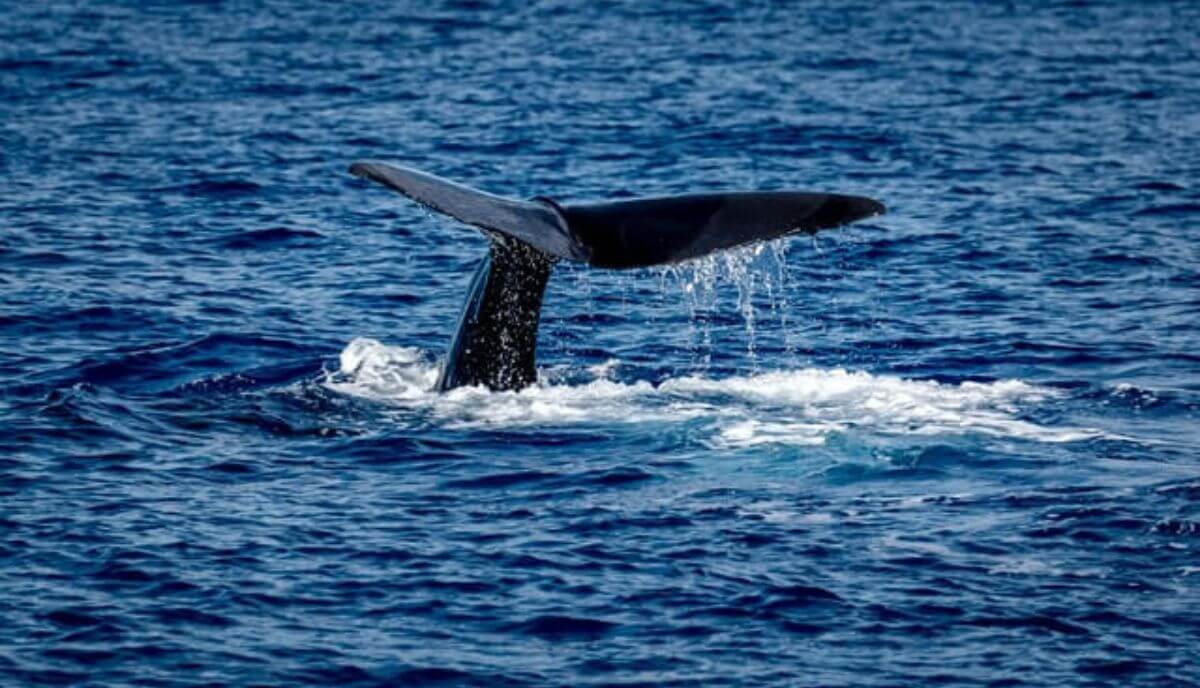 As a young child, I read and watched Moby Dick. Now that I’m an adult, I wonder what kind of a whale was in the story, and I then discovered it was a sperm whale.

Although seen as tamed, one cannot help but wonder if sperm whales are dangerous?

Generally, no. Sperm whales are friendly and non-dangerous marine mammals, but they are often misinterpreted as dangerous and wild due to their sheer size. Sperm whales do not actively attack humans, although there are cases where they hurt people, usually in self-defense.

Now, let us get to know more about these majestic creatures.

No. Sperm whales are not aggressive sea creatures. They are placid mammals, and they do not hunt humans. These ocean animals are reported to be peaceful toward humans.

However, they are understandably aggressive towards their prey. Sperm whales need to exert strength and force to be able to hunt their meals.

Sperm whales are intelligent sea mammals like orcas and humpbacks. With the capability to think, these creatures are aware that humans are not their food.

They also understand to stray away from ships and large boats, knowing that swimming close to these sailing vessels can be dangerous.

Unfortunately, it does not mean that there are no sperm whale casualties. In Greece alone, more than 50% of these sea animals observed suffered from a ship injury.

Although docile animals, sperm whales can be dangerous if someone pushes beyond their limit. In other words, sperm whales will attack humans when they are threatened or provoked.

A 1952 journal article published by New York History recounts the incident of Ann Alexander. After being actively hunted by sailors, a sperm whale took down the whaling ship and its two boats.

This 1851 incident proved that sperm whales are more than physically capable of destroying ships along their path.

Technically, no, sperm whales do not see humans as prey. There are no recorded cases of humans being eaten by a sperm whale. Being intelligent mammals, they are aware that people are not something to consume.

All of their prey are found in the open ocean, which the sperm whales actively hunt.

Although, there are still unfortunate incidents where humans get injured by sperm whales.

When swimming in open water, people can have a similar silhouette to other animals when seen from below. A hunting sperm whale may misunderstand that the swimming person as prey.

Due to their massive size, sperm whale throats’ are large enough to swallow a whole human. Thankfully, we are not on their usual menu.

Sperm whales are also disinterested in hunting humans because we rarely encounter them. Instead of eating people, these sea creatures might be more curious and friendly to approach us.

It also helps that humans do not have a taste similar to other prey like squids and fish. People are also too boney in comparison to sea creatures.

In short, sperm whales do not find humans tasty. And pursuing prey that is not familiar to them can be risky for them.

Related: Are Starfish Dangerous to Humans?

In this section, I will cover some additional questions regarding the potential danger of sperm whales.

Can a Sperm Whale Sound Kill a Human?

Sperm whales’ sound, also known as clicking, is the loudest animal sound in the world, ringing up to 233 decibels. Anything above 120 decibels can cause serious harm to humans’ ears.

Since sounds travel differently through water and air, sperm whales’ clicking may reduce up to 170 decibels in air. Though, it is still strong enough to rupture any human eardrums. Or worse, it can damage people’s other internal organs.

Can You Swim With Sperm Whales?

Yet, there are a few accredited places and groups allowed to conduct guided swimming with sperm whales, such as in Dominica. People are reminded and instructed on what to do and what not to do.

Still, one should keep in mind that even though sperm whales do not pose an active threat to humans, they are still wild marine animals that cannot be predicted.

In other words, they may be placed in uncomfortable situations that can push them to act hostile and threatened.

How do Sperm Whales Hunt?

Sperm whales hunt by diving up to 4,000 feet under the ocean. Though, these sea creatures can go as low as 1.2 miles just to find food.

It consumes around 2,000 pounds of food. So, sperm whales do dive low just to fulfill their diet.

Sperm whales use echolocation as they swim, sending high-frequency clicking sounds and listening to its echoes. They are not dependent on light and are comfortable using sounds and hunting in deep dark water.

These sea mammals turn upside down to create a powerful suction, which sperm whales use to suck squids a few feet away from them.

In general, sperm whales are not dangerous to humans. These aquatic creatures are docile and naturally curious about humans. Sperm whales only actively attack their prey and have no appetite for land beings. However, when placed in an uncomfortable or threatening situation, sperm whales may act in self-defense.

When sperm whales attack, they can inflict serious physical injuries or even death. However, there are no records of humans being eaten by sperm whales.

Though, some records in the 19th century show that a sperm whale attacked a whaling ship, which caused the death of multiple fisherfolks and ship wreckage.

Overall, sperm whales are misinterpreted as dangerous to their sheer size.

And, there you have it – you have come to an end of the “are sperm whales dangerous?” article.

If you like this type of post, I would recommend you another popular read: Are Giraffes Dangerous?