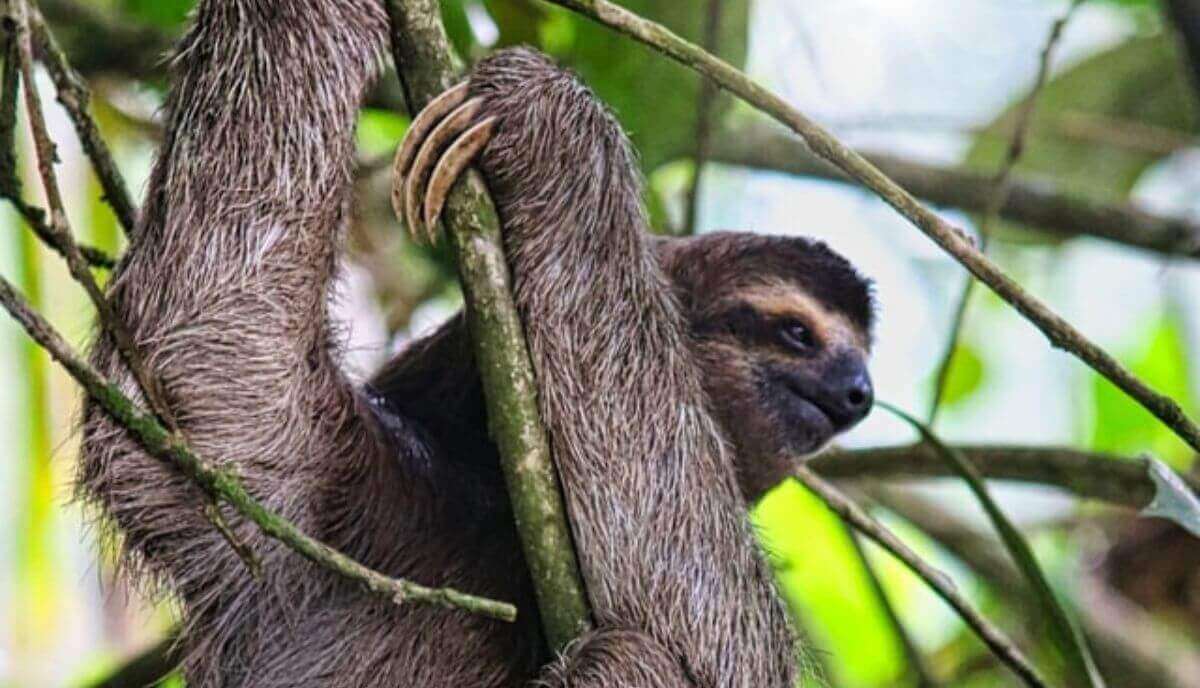 Sloths are furry tree-climbing animals that some people keep as pets. They like to keep to themselves and stay in their quiet environment. Yet, what many people want to know is – are sloths dangerous?

Sloths are not dangerous to humans as they are naturally not aggressive animals. However, if threatened, sloths can be dangerous and injure humans badly. They have sharp teeth and claws that they use to attack when protecting themselves. Unlike domestic animals, sloths do not like to be touched, as they are solitary animals who prefer to be left alone.

This article summarizes whether how dangerous sloths are and what you need to know to prevent unpleasant situations.

When left alone, sloths are peaceful animals that would not hurt a fly. In the jungle, they are prey, so they spend most of their time hiding in the trees and staying as quiet as possible. They are hunted by wild cats, eagles, and human beings. While they will not attack anyone, they have the means to defend themselves, which makes them dangerous.

Sloths have large and strong claws that can do quite a bit of damage to their attacker. These claws are adapted to hold on to branches while supporting their weight, so they don’t break easily. When they scratch their predator, it can leave them bleeding badly or missing a bit of flesh.

Other than their dangerous claws, they have large teeth that they use to bite their aggressor. They have four large canine-like teeth that can bite deeply into the flesh of anyone that gets too close to them. In addition, sloths have been known to bite humans and leave them with large holes which one can see through.

While their claws and teeth are the best way for sloths to attack people and other animals, they are also very strong. They may be small animals, but their strength is that of three or more people. This means that in a situation where they are competing with humans, they may overpower them.

No, sloths do not attack humans unless they are agitated by them. There are no reports of humans being attacked by sloths without reason. However, there have been some attacks when people have invaded their space and touched sloths repeatedly. Sloths don’t like human attention and touch, and they are most likely to attack when disturbed.

Unlike other domesticated animals, sloths do not like being groomed by human beings. When they are touched, they will attack since they interpret it as an invasion of their space. Therefore, they defend themselves using the strong claws that they use to scratch off the person. Sometimes, they use their teeth to bite the person, but only when they are really disturbed.

These animals become independent at around 18 months, and from then, they don’t like being touched even by their kind. However, most people do not know this; hence, they want to touch them, and that may irritate them.

One problem that most people face when dealing with sloths is that they don’t openly show agitation. Instead, if irritated, sloths would attack without a prior warning.

Can sloths hurt you?

Yes, sloths can hurt you badly. They have sharp claws that they use to attack their aggressors, causing terrible injuries to them. In addition, their nails are usually quite dirty from grabbing branches, so they can lead to severe infections if the area is not cleaned correctly.

They have big and sharp teeth that they use to bite people who invade their space. These teeth can leave large holes in the spot they have bitten off. in some cases; they use their teeth to tear off flesh when they are very irritated by their predator.

Sloths are also very strong, so they can hurt you if they get a good grab of your hand or leg. There have been reports of sloths breaking or twisting people’s arms or legs. This leaves the person with serious injuries that cannot heal quickly.

While they are mostly slow and cool beings, these animals can also be fast when they want to, especially when attacking.

Sloths are not naturally aggressive animals. They do not attack others without a reason because they would rather quietly avoid any confrontation. Sloths are not predators, and they do not see other animals as a source of food, so they do not have a particular reason to attack or be aggressive.

These three climbers primarily feed on foliage and leaves. They survive on a very low-calorie diet; hence, they do not have a lot of energy to attack others.

While they have teeth that can allow them to hunt and kill smaller animals, they do not. Sloths only supplement their diet with more plant-based food such as fruits, flowers, and occasionally insects.

The only time sloths may become aggressive is when they are defending themselves. They either claw the predator and bite them with their nine molar teeth.

This is why they are not easy animals to hunt since they will put up a fight to fend off their enemies.

FAQs – How Dangerous Are Sloths?

As we have already seen, despite their slow-moving and non-aggressive character, sloths can be dangerous. Here are some of the most additional frequently asked questions related to the potential danger of sloths:

They have four lower and five upper sharp teeth that they use to bite predators or their aggressors. While scratching using their claws as their primary means of defense, they can also bite.

They mostly bite and release their enemies, there are cases when they bite and tear off the flesh. Their teeth can be dangerous weapons that can cause serious harm to people who are bitten.

No, sloths are not poisonous. Poison in a bite is usually a means of weakening prey before feeding on it. Sloths are not predators, so they don’t need a toxic bite to hunt their prey.

However, their teeth give nasty bites that are painful and difficult to heal. This is because they tear a hole through the flesh, which can take months to heal and leave a horrible scar.

Sloths are easy-going animals that prefer not to attack anyone unless being previously provoked. They are creatures that live a solitary lifestyle, and they tend to avoid anyone near them. The only chance of seeing sloths to attack is when cornered or endangered by other predators.

Although it is known that two-fingered sloths are more likely to attack their aggressors than their three-fingered counterparts. This is because they are quick to scratch their attackers using their claws, and when need be, they use their teeth to bite them off. The two-fingered sloths also use their hands to punch their enemies.

While some people keep sloths as pets, they are not meant to be domesticated. They are wild animals that are intended to stay in the wild or conservation centers. Many people take their slow and calm nature to mean that they can make good pets, but that is not the case. They are not adapted to live with human beings.

Sloths have not undergone physical and behavioral evolution that enables them to survive in an environment with human beings. They also don’t like being touched, and they can attack those who do. They can be dangerous to live with, especially if there are adopted when fully mature.

Sloths seem like peaceful and chilled animals at first, but the more you know about them, the more this façade washes off. While they would rather stay away from their predators, they are not afraid to attack when the need arises.

They have all the features they need to harm their attackers, such as strong claws and large sharp teeth. When they are irritated, they can cause a lot of damage to their aggressor, thanks to their super strength. If you don’t want any trouble with sloths, it is best to stay away from them and leave them to their environment.