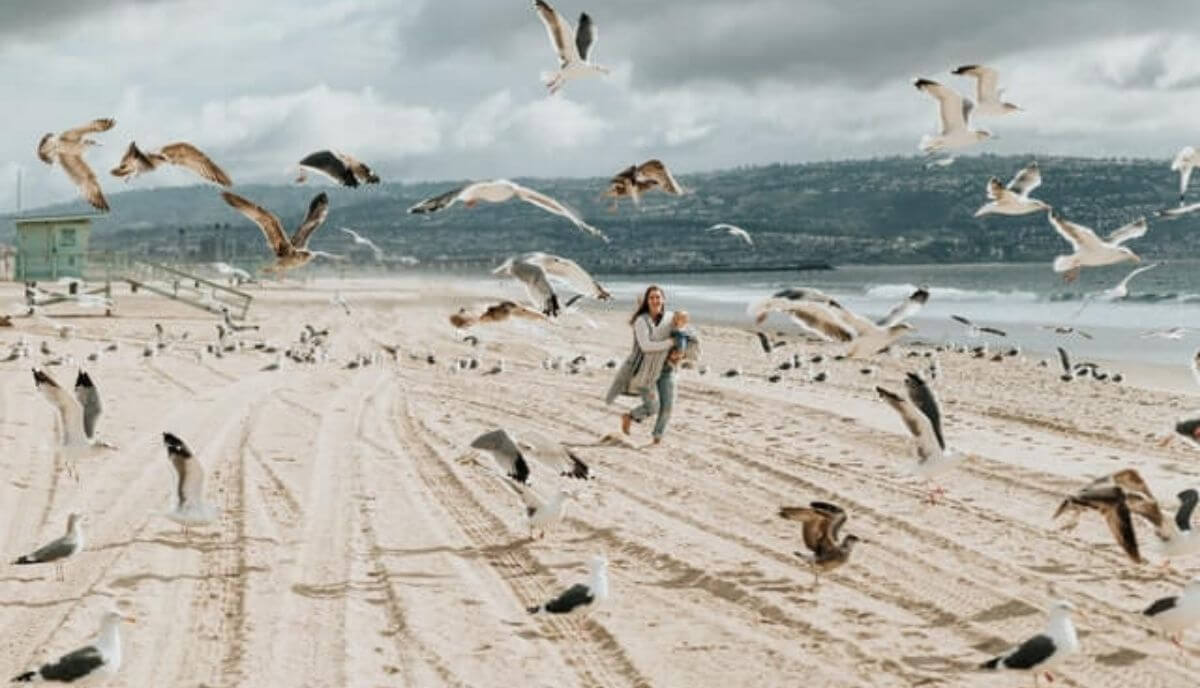 According to recent studies, seagulls are able to recognize human faces and even distinct human voices. This way, they can differentiate between a friend and a foe.

That leads us to our question, are seagulls dangerous, and do they attack their enemies?

Seagulls are potentially dangerous to both humans and other animals. These coastal birds can be aggressive, especially if you try to approach their nesting sites. However, seagulls usually do not attack humans for no reason, and they primarily strike when you have food or threaten them.

If you want to learn more about seagulls’ behavior, keep reading!

Yes, seagulls sometimes attack humans, but chances are you are holding food in your hand, and they want to grab it, or you are invading their nesting space. So, if a seagull starts diving in your direction, and you wonder why – you are probably near its chicks, or you have something delicious with you.

So, it is no surprise that seagulls started flocking to non-fishing coastal regions. Usually, these places are heavily visited by tourists.

In a recent study, seagulls are found to be fonder of human food than hunting fish. They notice that some seagulls prefer meals that are handled by humans.

One suggestion claims that seagulls are attracted to urban coastal areas because of more easy food resources and better nesting spots.

Unfortunately, even if they do not intend to, seagulls can inflict injuries on you. For instance, they can end up scratching you while in the process of food snatching.

At the same time, seagulls are highly territorial, especially if it involves their nesting site. They try to protect their eggs or young by building their nests in high areas where no predator can reach them.

Their offsprings usually roam around the ground before flying. So, if by accident you stumble upon them, the seagull may treat you as a threat.

If you encounter a stressed seagull, try to immediately determine what caused it. Usually, if it is not about food, then it might be regarding their nest and young.

You should slowly leave the area to avoid causing more stress.

Read Also: How Dangerous Are Peacocks?

Seagulls attack in various ways, using every part of their bodies. However, most people fear getting hurt by these birds’ beaks.

In Barry Island, dive-bombing seagulls have been a big problem to which some residents proposed culling them. Dive-bombing is a type of attack where the seagulls swoop on their target. This isn’t usual, and it most likely happened because there is a large population of seagulls that are used to being fed by tourists.

These birds are protected by law, but a license may be issued under exceptional circumstances for control measures.

In London, seagulls started attacking a man and continuously pecking him as he tried to get away. Such an attack was considered out of the ordinary as seagulls mostly attack for a reason.

However, experts suggest that these birds may have attacked the guy because he walked near their nesting site.

The poor man was most likely thought of as a threat by the seagulls.

How to Deal With Aggressive Seagulls

Here are some simple ways to deal with aggressive seagulls:

●    Find a Shelter – Running away is not a safe option as these birds can quickly fly next to you. Finding a shelter is the best option as it serves as a barricade between you and the angry birds.

●    Do Not Waive Your Hands – When attacked by a seagull, most people will start waving their hands to shoo the bird away or protect themselves. Just like other birds, seagulls can sense human emotions. Instead, hold your hands firm and immediately leave the vicinity.

●    Do Not Feed The Birds – Gulls will try to steal your food, which could result in hurting you. So, try to avoid eating around seagulls.

●    Leave Their Territory – This might require your immediate senses. Seagulls are territorial in nature, and you might be entering their space. Find a neutral space, far away from where you spotted the seagull.

●    Use an Umbrella – Seagulls attack the “head” of the tallest target. So, they will likely dive-bomb your umbrella instead of you.

Do Seagulls Attack Other Birds?

Yes. Seagulls do bite, peck, and strike as means to defend themselves. Seagulls can bite your hand for you to drop your food, and they can also peck you on the head when you walk too close to their nesting site.

In Conclusion – Are Seagulls Dangerous?

Seagulls are aggressive, but most of the time, for a reason. Gulls can be dangerous either if you are within their territory or have the food they want to eat.

Although hunting birds, seagulls have adapted to a scavenger lifestyle. They mainly target human food as it is easier to find.

Seagulls will bite, peck, scratch, or dive-bomb you to get what they want. Even with their aggressive behavior, they are chill animals when not threatened.

However, it is not advisable to approach them because they might misinterpret your approach. At the same time, do not feed them. It can affect their dietary needs and overall health.

And there you have it. With this, we complete the “are seagulls dangerous?” article.

If you liked this type of article, here’s our recommendation for a similar post: How Dangerous Are Eagles?