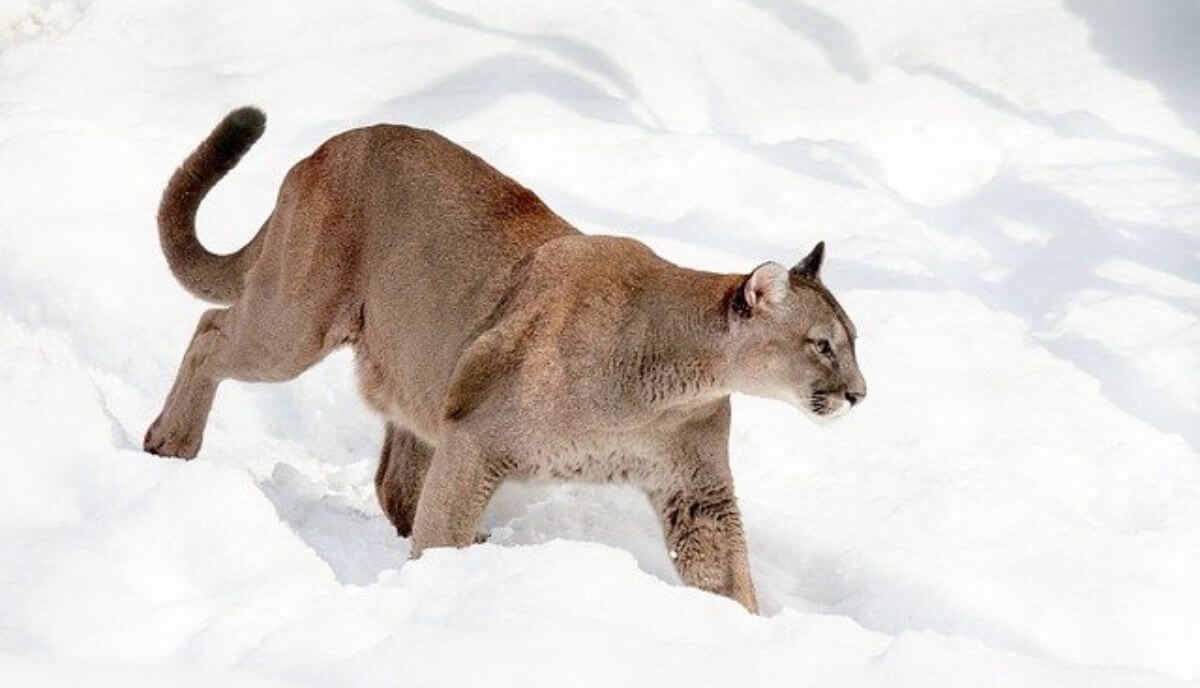 Large and agile, pumas are amongst the most mysterious cats on Earth. They might take bigger proportions than particular other “big” cats in the wild, and they are often called mountain lions or cougars.

Despite being large, the elusive creatures called pumas are related to feline species that are smaller in size, so comparing them to leopards and lions would be a mistake.

You can come across pumas primarily in the highlands of North and South America, and you may wonder – what should you do in case you encounter them – are pumas dangerous, or is it a myth?

Yes, pumas are quite dangerous animals, capable of taking down creatures that are double their size. A single bite of these felines can cause severe injuries and even fatal consequences to humans and other animals. However, in the past one hundred years, no more than 20 human fatalities resulted from a mountain lion attack.

If you want to learn more about these powerful cats and what makes them so dangerous, keep reading!

No, pumas are not known to eat humans. While they indeed consume meat as their primary source of food, cougars do not see humans as their prey (except in very rare circumstances).

The territories where pumas reside are usually away from human settlements. These felines are crepuscular, so they come out to look for food at night.

The puma hunts a wide range of animals, as it’s an ambush predator and carnivorous stalker. Its prey includes deer, elk, horses, sheep, and cattle.

These animals make up their primary food sources, but in essence, pumas will consume any animal they can capture, including those that are huge, such as moose.

Pumas will also stalk and chase prey through shrubs, over ledges of rock, and in trees. When attacking, they spring onto the victim’s back and bite it in the neck until suffocation.

This killing method requires having a nimble spine, and being one of the deadliest big cats, pumas always impress with their agile movements.

In addition, cougars are also known to conceal their bigger prey with bushes after killing it, as they will return to feast on it many days after. When it comes to supplementing their meals, these large cats prefer to consume small rodents and big insects.

As they mature and develop their hunting techniques, young pumas often consume smaller prey, such as porcupines, raccoons, and American beavers.

Pumas very seldom attack humans, as they’d much rather not be around them. However, they can indeed attack people in specific scenarios, such as when feeling cornered or when there’s someone between the female puma and her young.

A mountain lion can also attack if you genuinely look like its prey, so if you crouch, sneak, or flee, pumas may decide to hunt you. There have been cases in which pumas went for humans who were hunching over their bicycles.

One unfortunate situation occurred in Washington, where two cyclists were attacked by a cougar, one of whom was killed and dragged to the woods. (source)

Animals generally dread human beings, and this reduces the danger of humans being attacked in their own environments. For years, many communities worldwide have struggled to promote cooperation with wild animals, pumas included, in environments where humans predominate.

The danger of getting attacked and murdered by a mountain lion may not always be accurately predicted by signs that animals are known to pick up on, as people are often surprising predators. Animal fright reactions in these circumstances could be ineffectual and potentially increase the likelihood of death caused by a puma.

Pumas have been seen to display intense fear behaviors when interacting with humans. For example, they spatially and temporally avoid housing areas, whereas, in regions that are becoming more and more populated by humans, they have changed their mobility and feeding patterns.

Mountain lions also actively avoid human habitation during the day, especially in areas where there’s a significant potential for interaction.

However, they lessen this avoidance behavior throughout the night, when they can choose to visit even more densely populated areas that pose a danger for them.

Conflicts between humans and pumas put vast populations of these animals in danger of extinction, not to mention that they cost communities quite a lot of money. Approaches that include learning more about the specie may be effective in solving such issues.

When humans built settlements on puma territories, the felines killed the cattle and rarely the humans. Still, pumas are regarded as hazardous when it comes to attacking humans, so it’s best to stay out of their way.

Related: How Dangerous Are Wild Dogs?

How to Survive a Puma Attack?

In case you have been “fortunate” enough to meet a puma in one of your journeys, first refrain from running. Cougars are very likely to respond with a “chase, capture, and kill reaction” if a person runs from them.

Here are the steps that you could take to protect yourself:

Wrap Up – Are Pumas Dangerous?

Pumas are dangerous large felines known to attack humans in the past, and some of these attacks even led to fatal consequences. However, cougar attack on humans doesn’t often happen; most of the time, it occurs under extraordinary circumstances when humans make fatal mistakes that lead cougars to believe they might be their prey or when the cat feels threatened.

If you’re out in the wild on your own and without any means to escape or defend yourself against the puma’s attack, you must show your enemy who’s the boss.

Cougars are not fearless, and fear is one of the most effective weapons in the hands of those who know how to use it. At the same time, keep in mind that if the puma is determined to make you its prey, you have very slim chances of escaping its attack. Cougars are very powerful felines, so don’t underestimate them.

Hopefully, you have understood just how dangerous a puma can be and what you could do to protect yourself if this secretive creature attacks you.

Thank you for taking the time to read this article! If you liked this post, here’s another similar read: Most Dangerous Monkeys.