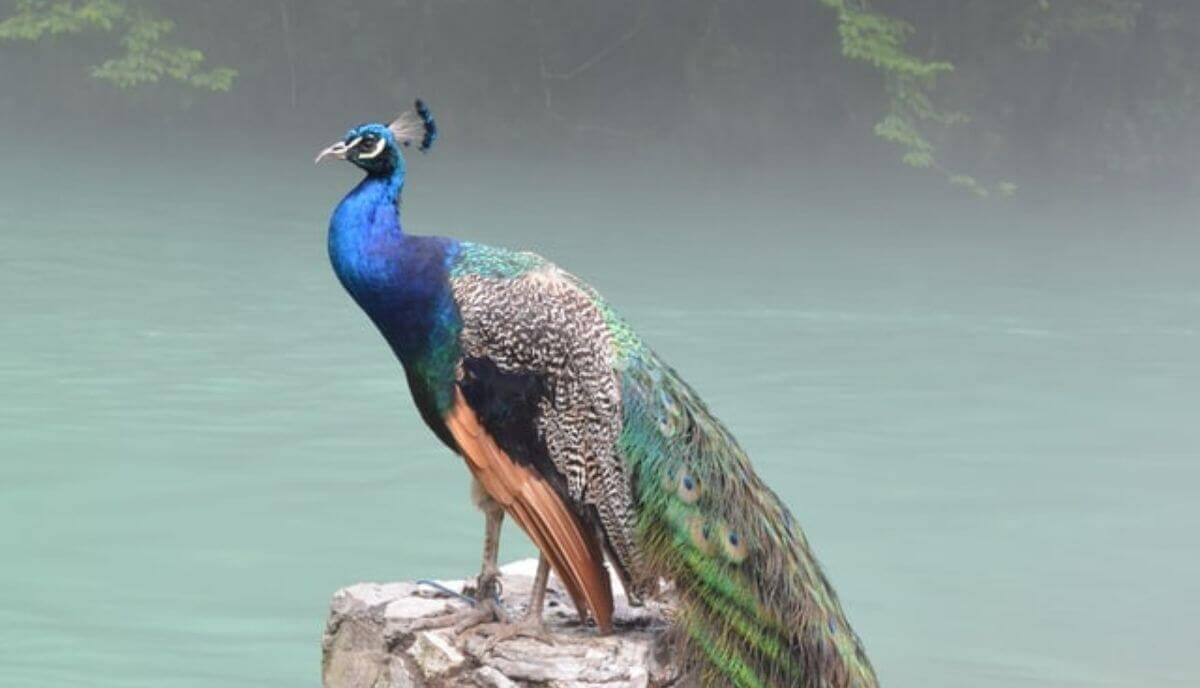 Many people know peacocks to be beautiful birds, and most treasure them and would like to keep them as pets. However, others question, are peacocks dangerous and aggressive?

Peacocks can be dangerous and aggressive. In addition to their sharp claws and beaks, peafowl is a large bird that can grow to a height of four feet. For this reason, they feel strong and confident enough to attack anyone that gets too close to them. However, unlike many naturally aggressive birds, peafowl is not; and will only become dangerous when irritated or challenged.

How Dangerous Are Peacocks?

Unlike birds such as geese, peacocks do not attack anyone without reason. You have to annoy them or challenge their position for them to attack. That said, they can cause a lot of harm to human beings and other animals.

While they don’t have teeth, they have a sharp beak and claws for attacking someone. In addition, they can jump on the person, peck, and scratch them using their talons hence injuring them seriously.

Peacocks are quite large, which is why an attack by them can potentially leave bad injuries.

There are various times when you should not get too close to a peacock, such as the mating season. This usually falls around August and September.

Do not get close to a peacock when it is trying to impress a male. They typically do this by opening up their feathers and starting a dance to get noticed by a potential mate. At this moment, the male is usually alert, and disturbing them could lead to an attack.

Peacocks do sometimes attack people, and there has been one case of a peacock attacking and killing its owner in Thailand. According to the report, the man was feeding his birds when one male attacked and clawed him. As a result, he started suffering from headaches and soon died after going into a coma. This event shows that these beautiful birds can be quite dangerous when provoked.

Due to their beauty, most people think that peacocks are friendly birds, but that isn’t true. They are very territorial animals and do not like to share their space. They can also be quite irritable so getting too close is not wise since they may jump on you.

It would be best if you read the body language of the peacock to ensure that they are not ready to attack.

You can tell that a peafowl is preparing to attack you by the sounds they produce and the positioning of their head. For example, if it starts crowing at you while flustering its feathers, you should back away from it slowly. You can also identify that it wants to attack when it cocks its head while getting close to you.

In such a situation, you should not run away but slowly move away from it. Never turn your back to the bird since this might cause it to jump on you.

Why Are Peacocks Aggressive?

Peacocks are not naturally aggressive, so they need a reason to attack you. The following are four reasons why.

Like most animals and birds, peacocks take pride in their space, and they don’t like it when people get too close. They protect their territory not only against people but other animals as well. The birds interpret an invasion of their space as an attack, so they feel it necessary to defend it.

This is why you should do it slowly and without making any sudden moves even as you are feeding them. They may get spooked fast, which may lead to an immediate attack. If you find yourself in their environment and they seem aggressive, slowly remove yourself from that area.

One of the reasons why peacocks are very territorial is because they don’t like it when people and other animals get close to their nests. Peacocks do not lay many eggs in their lifetime compared to most birds. They may produce one or two eggs until their fourth year when that number increases to five.

Because of this, they are protective of their nest; hence, you should not go too close to their nest. Both the male and female can attack you when they feel threatened by your presence. They are always close to the nest, so it is not easy to access the eggs.

During mating season, the peacocks can be more aggressive than usual, so you should remember this when taking care of them. They don’t like being disturbed when looking for a mate since their hormones are usually high, and they are more irritable.

So, while both males and females can be dangerous during mating season, you should be more conscious of the male. It is more likely to attack anyone that interrupts it when trying to impress a female.

4. Peacocks Are Not Friendly

Some people may want to try to pluck the beautiful feathers of a peacock which may make them feel threatened. Getting too close to them and trying to touch them may be interpreted as an attack, so it is natural that they may defend themselves.

If you visit them at the zoo, keep children far from them since these birds have been known to attack children due to their small size. Always be aware of their position and body language, so they do not surprise attack you.

Peacocks are one of many birds that can be quite dangerous if you are not careful around them. They are very protective of their environment, and this may make them aggressive towards anyone. While they may look friendly, they are not, so you should keep your distance from them. Also, keep your pets, such as dogs, away from them since they do not get along. The curiosity of dogs wanting to sniff around could be interpreted as an attack, and they may defend themselves.