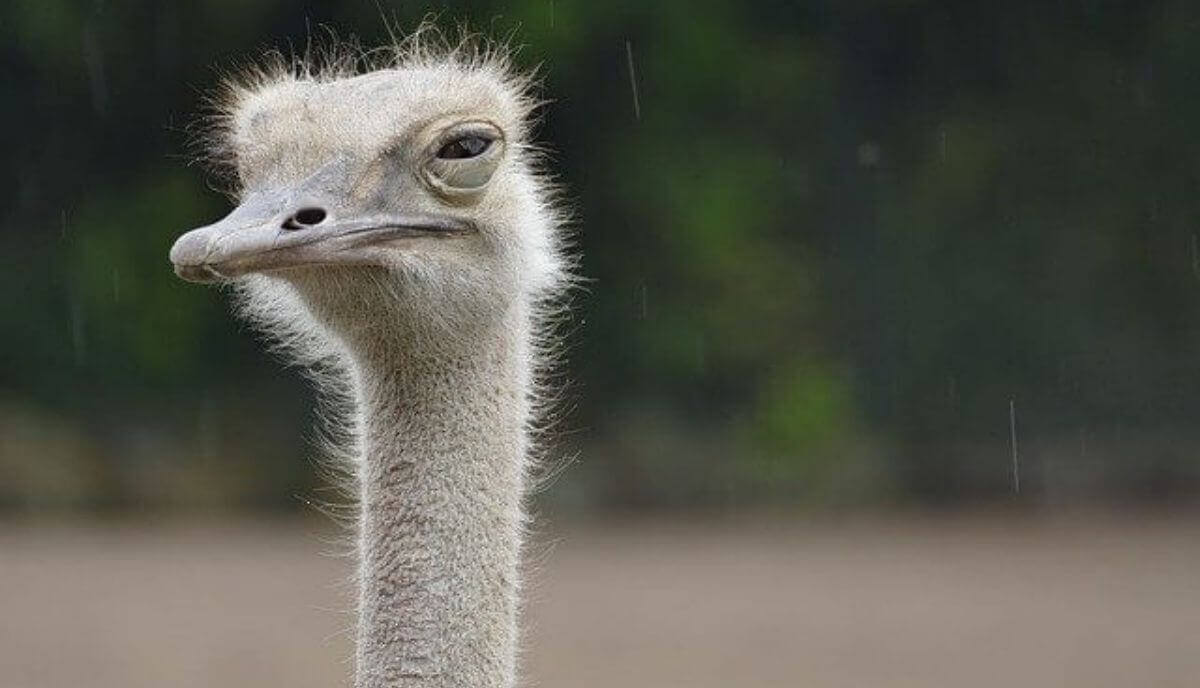 If you ever had the chance to see a fully adult ostrich in your local zoo, you’ve probably been amazed by the gigantic size of these birds. I keep getting stunned every time!

And if you are like me, you certainly wondered – are ostriches dangerous, do they attack humans in the wild?

Yes, ostriches can be quite dangerous, especially when you startle them or make them feel threatened. Male ostriches are particularly dangerous and mean during the breeding season, and they are prone to attack people. Adult ostriches can grow up to 9 feet, and they weigh as two adult humans, which makes them stronger than almost every human being.

Apart from that, these birds are widely known for their unpredictable nature, making it difficult for humans to comprehend how they would react in different situations.

In this article, I will try to help you understand the nature of these flightless giants.

Let us explore further and see what makes these birds potentially dangerous.

1. Ostriches are the Largest Birds

Of all the living birds, the ostrich is the largest and one of the strongest birds, making it dangerous for humans.

Typically, a male ostrich can weigh anywhere between 220 and 287 pounds. While the females usually weigh between 198 and 242 pounds.

With this intimidating size, ostriches, both male and female, are capable of outweighing the average human, and the birds can cause serious injuries upon attacking an individual.

Ostriches are capable of running as fast as 50 km per hour (around 30 miles per hour), and sometimes even more. When the bird is frightened, it can reach speeds of over 70 km per hour (over 45 miles an hour).

While these top speeds usually help an ostrich flee from its predators, the speeds also make it possible for the bird effortlessly outrun a human.

So, if an ostrich comes after you, which is a rare occurrence, and you decide to run away, know that you cannot outrun this speedy giant, and it will reach you in no time.

Ostriches are powerful birds. They have extremely strong and muscular legs that they use as weapons.

Not just that, their 4-inch claws are known to be deadly as well. A single kick from these legs can easily hurt or kill some of the biggest animals in the wild, including the lion.

This fact makes evident the level of injuries humans can sustain if they get kicked by an ostrich.

Though rare, there are also reports of ostriches causing eye injuries in humans with their broad and strong beaks. These attacks are known to have caused a permanent visual loss in adult humans, which are the first reports of the kind.

Ostriches are one of the most territorial birds around, but not just during their breeding season. Male ostriches can particularly become dangerous if their territory is jeopardized.

While it is a common belief that birds of all kinds will take flight when threatened and therefore pose less of a threat, some birds, like ostriches, display extremely aggressive behaviors.

Therefore, when you plan to visit an ostrich, be wary of its territorial behavior and give the bird its space to avoid potential risks.

If the bird starts to consider you a threat, it is more likely to become dangerous and can commence an attack.

Yes, ostriches do attack humans, however, there have been very few reports of such attacks. An ostrich is most likely to attack a human mainly during three situations: during the breeding season, when its territory is breached, and when it feels threatened and goes into defense mode.

If you get too close to an ostrich, it may perceive you as a threat. Furthermore, if you touch it, it could either run away (good for you!) or it could choose to defend itself by attacking you.

You could be kicked in your stomach with those two strong, solid legs, or pecked in your eyes, or any other sensitive part with its big beak. If the bird chooses the defense option, you will end up in pain.

Can an Ostrich Kill You?

Yes, an ostrich can kill a human. As scary as it sounds, this large, flightless bird is capable of killing an adult human and even large predators like lions. Its two-toed sharp claws, in combination with their powerful long legs, may deliver fatal kicks and lacerations. However, the number of recorded incidents of deaths by ostrich attacks is minimal.

Though there is a lack of sufficient evidence on human deaths due to ostrich attacks, there are, however, multiple records of these birds causing serious injuries in humans. Some of them include abdominal wounds and severe ocular trauma.

Ostriches are known to cause injuries in two ways. The most common of the two is when the bird uses its broad and strong chest plate to slam a human to the ground.

After this, the ostrich will jump on the person, and with the bird weighing over 200 pounds, this action can easily lead to contusions and rib fractures.

But, the most serious injuries are caused when the ostrich kicks with its powerful foot. As discussed earlier, the bird has 4 inches long claws on its feet, which it uses for its own protection against predators.

When it kicks a human, these claws slash against the person’s body, leading to serious injuries like cuts. Severe ocular trauma, or eye injuries, caused by the pecking of birds is quite uncommon, but not with ostriches.

The aggressive behavior of these birds is most pertinent to territoriality has resulted in two reports of an ostrich’s attack that led to a permanent visual loss in adult humans.

Read Also: How Dangerous Are Emus?

FAQs on How Dangerous are Ostriches

Now that you know that ostriches can be dangerous in certain situations, in this section, we are going to answer some additional common questions on ostriches.

Yes, ostriches can be aggressive, especially when they come face-to-face with their predators and when they are made to feel threatened or cornered by humans. Provoking these birds in any way will make them aggressive and violent.

In most cases, threatened ostriches would usually run away rather than get into a fight. However, if they feel the need to defend themselves, they will stand their ground and attack with their extremely powerful legs and wide beak.

As mentioned, ostriches tend to get more aggressive during breeding when someone tries to invade their territory, so extra care should be taken.

Also, the level of aggression in male ostriches is known to increase when they reach puberty. 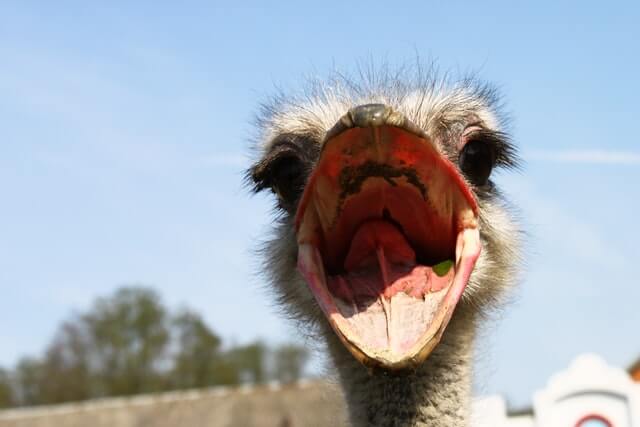 Ostriches do not have teeth, but they can deliver a painful bite. Though the bite may not be intentional, in most cases, even an accidental grab of a human’s finger by the bird can cause great pain.

In a post by Daily Mail, there is a video in which an ostrich bites a man’s finger in a wildlife park. Luckily, the incident hasn’t led to any serious consequences.

So, yes, though ostriches may not have teeth, they can bite or snatch with their beak, which can be painful nevertheless.

But, it is important to note that the deadly kicks delivered by an ostrich with its two-toed legs can be a lot more dangerous than its bite.

How to Survive an Ostrich Attack?

While we recommend that you avoid encounters with ostriches altogether, here are a few survival tips just in case:

To avoid a charging ostrich:

When it comes to fighting:

Wrapping it Up – Are Ostriches Dangerous?

In summary, ostriches can potentially be dangerous to humans as they are the largest and most powerful birds on the planet. Equipped with strong legs and razor-sharp 4-inch claws on their feet, ostriches can deliver powerful kicks that can cause serious injuries.

However, ostriches do not pose an active threat to humans, as they would usually run away than becoming aggressive. In order to be on the safe side, never make the bird feel threatened or scared in any way.

Thank you for reading. If you liked this type of article, here’s a recommendation of a popular read: Are Camels Dangerous?