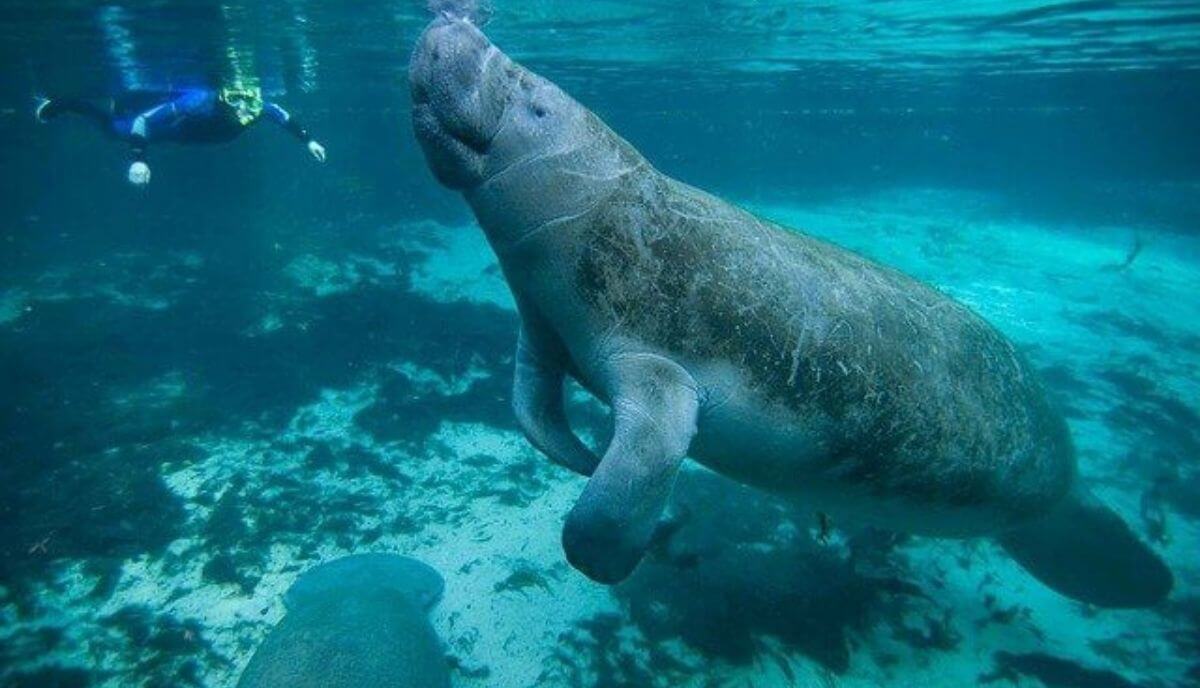 I had the opportunity to see manatees up close. They are such graceful swimmers, so it was super fun watching them. We got to watch one of the caretakers swim with them.

However, as they swam together, I couldn’t help but wonder – are manatees dangerous?

It turns out manatees are not dangerous animals at all. This 10-foot marine giant is a gentle and docile being, and there are no records showing that manatees actively attack a person. However, considering their size and strength, they could be very dangerous if they wanted to.

Do not be surprised when they try to feel you. Manatees are genuinely curious animals that will likely approach you. However, as much as possible, do not try to touch them.

No, manatees do not attack humans. There is no recorded incident in which a manatee has attacked a human being. Manatees are known as calm marine animals that enjoy human interactions.

Yet, while they are most of the time harmless, if anyone threatens them, they might use their weight and power to protect themselves.

These aquatic creatures have no natural predators. However, manatees should probably be afraid of us, as humans are known to cause injury to them.

When riding boats, humans may not be able to see that a manatee is swimming by. They can unintentionally (or intentionally) hurt the marine mammal.

Humans also continue to threaten manatees’ survival by blocking natural springs and building up the coastline. People moving from place to place can be the biggest reason for this change.

It appears that cities built along the coastline have endless opportunities. In turn, this attracts more people to visit and stay. Unfortunately, most of us are not aware of such effects.

Besides destroying their habitat and injuring them, we also affect their food source.

In a 2009 study published by Proceedings of the National Academy and Sciences, human activities accelerated the loss of seagrass.

Seagrass is not only important for the coastal ecosystem, but it also serves as the primary food source for marine animals like manatees.

Unfortunately, manatees are not the only marine creatures that suffer due to human activities near their natural habitat. While people continue to endanger them, manatees are more than excited to ask us only for belly rubs.

No, manatees do not eat humans. Manatees are herbivores, and they are not interested in eating meat of any kind. Also, they are peaceful beings that have no interest in hurting people.

These aquatic giants prefer to laze around in their habitat rather than be aggressive.

Their main food source is based on grass – seagrass. You might think manatees have a pretty boring diet. But, there is a wide variety of seagrasses in their diet.

Some common seagrasses that manatees go for are eelgrass and coontail. Turtle grasses are quite common around Florida and the Caribbean.

So, it is not quite a surprise when you see manatees floating around these areas.

Can Manatees Kill You?

Generally speaking, yes, manatees can kill you due to their enormous size and sheer strength. Luckily, manatees are not known to attack people, let alone kill.

Manatees may look threatening because of their large build. However, they are not aggressive animals.

These marine creatures have been observed not to retaliate even after being abused. Though, there is always a slim chance that manatees will attack out of self-defense.

In a recent event, a mutilated manatee was found in Florida. The word “Trump” was written over its body.

Even after being abused, no record showed that the manatee fought back against the molester. Unfortunately, the person behind the manatee attack is yet to be identified.

Manatee also detects when there is danger. Instead of confronting it, the manatee will change its course.

There are stories and cases where persons accidentally hit manatees during their boat trips. Most of the time, manatees swim away from the boat.

During coastal visits, there may be a warning to avoid manatees. These warnings are not for you but for the safety of manatees.

Related: Are Koalas Dangerous to Humans?

In this section, we are going to cover some of the most common questions about a potential manatee’s danger.

However, in most cases, upon sensing danger, manatees will immediately steer away.

There are other instances that a manatee may look aggressive. When a manatee is injured, it may appear belligerent. It is because it is afraid.

Another instance is when a male manatee struggles to mate. Its agitation may be misinterpreted by humans, thinking it’s a threat.

Manatees do not bite. People are usually afraid of manatees because of their large jaws and set of teeth. But their molar teeth are perfect for chewing their favorite meal, seagrass, and not for attacking and biting potential enemies.

Manatees are not predators, and consequently, they do not have canine teeth. Canine teeth are to rip and tear food. Instead, they have ridged pads to tear through the seagrass.

One theory suggests that manatees do not attack humans because they have no natural predators. Manatees do not view us as a threat. Instead, they even try to approach us out of curiosity.

Even if they do not bite, it does not mean you have a free pass to swim to a manatee. There are laws and rules disallowing humans to touch and approach a manatee.

Are Manatees Dangerous to Swim With?

No. Manatees are safe to swim with, thanks to their calm demeanor. So, do not panic if, by chance, you get to swim next to them.

As they do not treat us as a threat or prey, manatees can swim right past us. However, make sure not to stress them when they try to approach you.

The United States has strict rules concerning manatees. One of the rules prohibits you from swimming with manatees.

Swimming with manatees is prohibited to avoid disturbing them in their habitat. It includes a prohibition from touching these mammals.

However, there is only one place in the United States where you are allowed to swim with manatees. It is the Crystal River in Tampa, Florida.

Wrap Up – Are Manatees Dangerous?

To sum it all up, manatees are not dangerous to humans. They are one of the most docile animals on the planet. Even though they weigh almost half a ton, they are very gentle and non-aggressive creatures.

Having no natural predators, manatees are the least of your worries. However, due to laws and regulations protecting endangered species like manatees, it is prohibited to approach them.

If you ever see them along the coastlines, please steer away. Also, be attentive not to hit them while riding your boat.

If you are interested to see manatees up close, please visit the Crystal River in Florida. They are more than welcome to assist you with your adventures.

Thank you for reading. If you liked this kind of article, here’s a recommendation for a similar read: Are Leopards Dangerous?