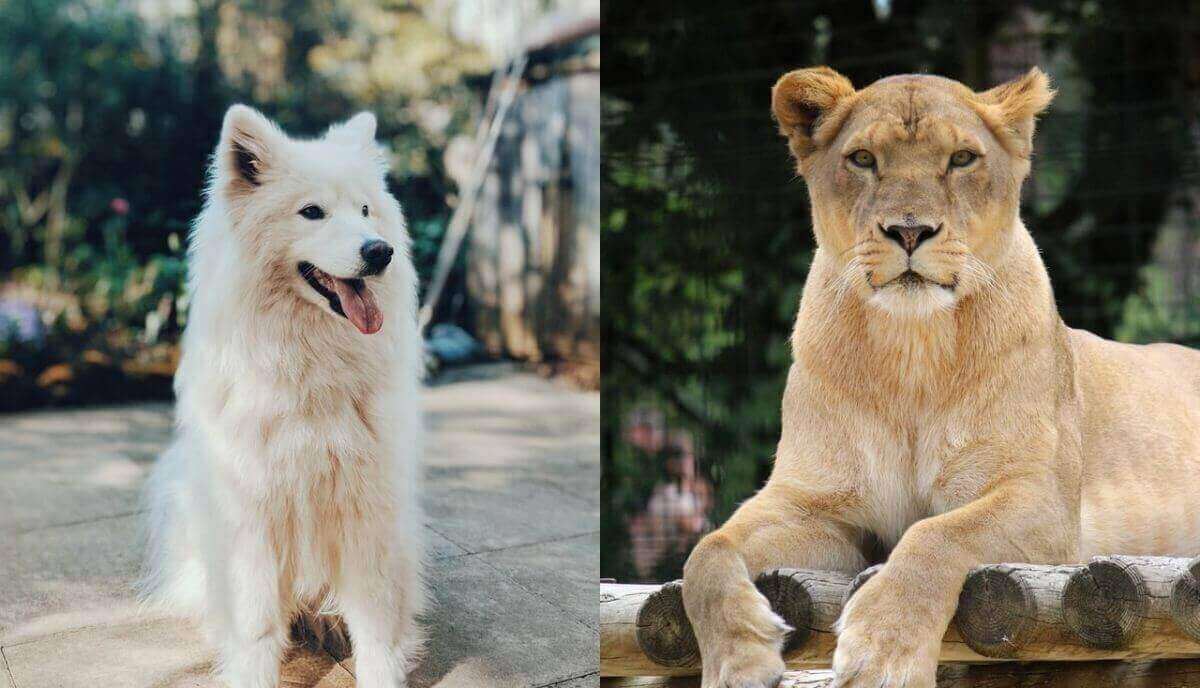 I recently stumbled on a Chinese Tibetan Mastiff, and I mistook this dog breed for a lion because of the physical appearance of this four-legged furry animal. Its huge body and golden mane had a striking resemblance with that of a lion.

I was left with the thought in my head “are lions dogs? or were they related to dogs?”. It might seem confusing, and puzzling at the time but the answer is not at all complicated.

No, lions are not dogs, as lions belong to the cat family known as Felidae, and dogs are part of the Canidae family. As a part of the Panthera genus, lions are closely related to jaguars, leopards, and tigers. On the other hand, dogs are most related to gray wolves, with whom they share almost 98,8% of the same DNA.

Are Lions Dogs or Cats?

Lions are known to be members of the Felidae family, the same group as domestic cats. However, lions are more closely related to tigers, jaguars, leopards, than they are to domestic cats.

Pumas, cats, and cheetahs are referred to as the small cats of the Felidae family because they belong to a sub-family group called Felinae.

While lions, tigers, jaguars, leopards, and snow leopards are referred to as big cats of the family because they belong to a sub-family group called Pantherine.

Are Lions Related To Dogs?

Lions are not genetically related to dogs because they are part of a different family and genus. However, lions and dogs are both in the order Carnivora (meat-eating diet), which means they are only related by their diet, but they are separated into different suborders. Lions are classified under the Carnivora suborder called Feliformia, while dogs are classified under the suborder Caniformia.

Feliforms have more specialized carnassials, shorter snouts, and fewer teeth than caniforms. Lions are more Feline than they are Canine (which means lions behave more like cats).

While dogs are completely Canines, they belong to the Canidae family along with wolves and foxes.

Canids communicate with each other by using their scents, and occasionally they use vocals like barks, growls, and howls (this sounds more like a dog than a lion). On the other hand, Felids are more accustomed to roaring as a way of communication.

Read Also: Lion As a Pet

Why Are Lions Cats?

Lions are cats because they are part of the biological family Felidae, together with 36 other cat species. This family includes lions, tigers, jaguars, leopards, as well as small domestic cats. However, due to their size, lions are also referred to as ‘big cats’.

The Felidae family was built for hunting (this applies to both cats and lions). Cats were initially wild animals that were domesticated in the near east around 7500 BC.

By helping our ancestors get rid of pests (e.g rodents) and protecting their food, cats naturally became the domesticated predators we keep as pets today.

The members of the Felidae family also have retractable claws that can be drawn into their paws. This ability protects their sharp claws from wearing down when they do not feel the need for them.

Even though lions and dogs are both carnivorous animals they do not fit in the same family. Cats and lions belong to the Felidae family and dogs are part of the Canidae.

Although lions and cats are both in the same family, they are further divided into subfamily groups. Lions are part of the Pantherinae subfamily, and that is why they are known as big cats.

Lions are also the only member of the Felidae family that has males and females with distinctive looks. The male lion has a thick mane while the female lion (lioness) does not.

And that’s all. I hope I’ve helped you learn more about lions by answering the common question – “are lions dogs or cats”.