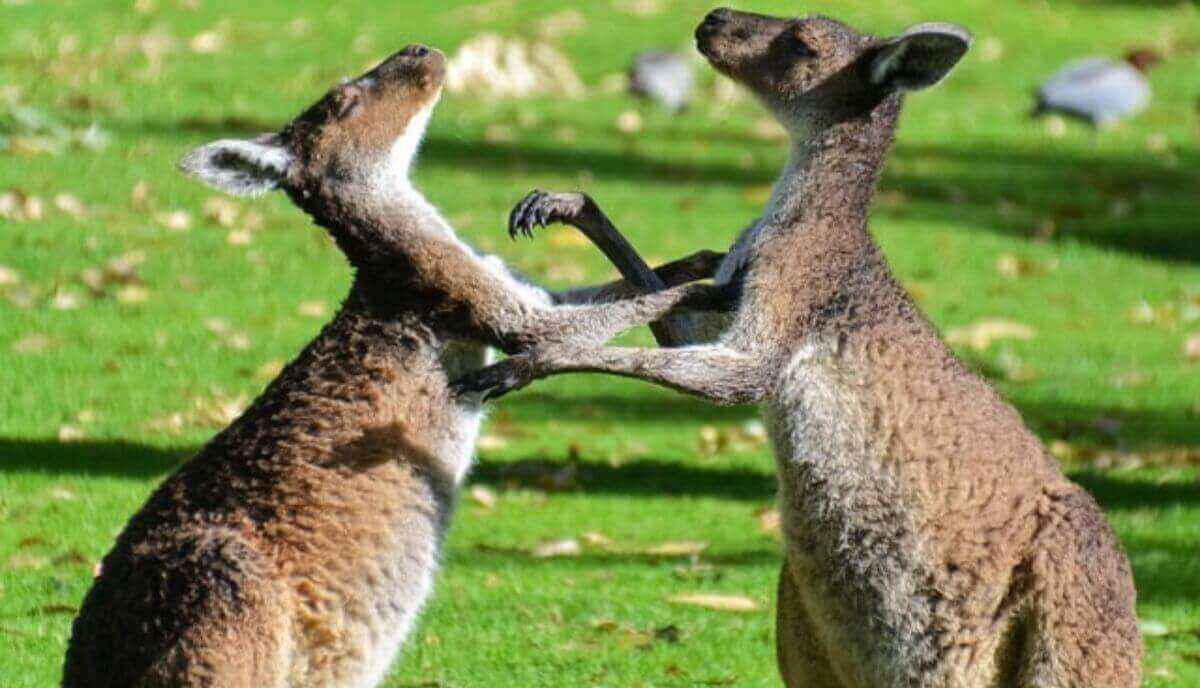 Kangaroos are the legendary fauna of Australia, known for their hopping abilities and ripped bodies. They are the largest members of the marsupial family, and what many people wonder is – are kangaroos dangerous?

Yes, kangaroos are potentially dangerous animals, especially male kangaroos. They have strong hind legs and long powerful claws capable of causing irreparable damage to their opponents. However, kangaroos are usually docile creatures and would only attack if provoked or when their young ones are threatened. To avoid potential danger from a kangaroo, you should keep a safe distance.

While kangaroos would normally mind their business, they are known to do the unthinkable when cornered or provoked. A punch with the front leg can be harmful as their front legs are equipped with claws which they can try and gouge out the eyes of the trespasser. Their hind legs are even more powerful and are known to deliver kicks hard enough to cause serious injuries or break bones.

On the hind legs are also long and sharp nails with which they can disembowel their opponent, be it a dog, another kangaroo, or another animal who crosses their boundary. When encountered in the wild or wherever one is advised to exercise extreme caution.

Kangaroos are often portrayed on TV and in movies as friendly and accommodating, but we find that kangaroos are not too friendly in real life.

Kangaroos view anyone who comes close, and that quickly, as a threat. They aggressively protect themselves when threatened.

Are Kangaroos Dangerous to Humans?

Yes, Kangaroos can be very dangerous to humans. Although Kangaroos don’t go about looking for humans to attack, incidents with humans can be fatal. Therefore, you should exercise caution whenever you are in their vicinity.

It is never a good idea to approach kangaroos that are not accustomed to seeing humans (especially if you are standing because wild male kangaroos can assume you to be another kangaroo, and they can feel threatened).

Kangaroos can especially be dangerous to humans given these circumstances:

Are Kangaroos Dangerous to Dogs?

Yes, kangaroos can be potentially dangerous to a dog. Although kangaroos don’t attack dogs, they are more likely to defend themselves from dogs. As a defensive tactic, kangaroos often lead their predator (dog) into the water where they can stand while being submerged in the water. If the attacker swims out to them, the kangaroo will attempt to use its claws and the weight of its body to drown the predator in the water.

A kangaroo experienced in conflict can inflict serious injuries if the situation is not arrested quickly. In the wild, wolves and wild dogs hunt mammals (or animals with mammal characteristics), and this includes kangaroos.

The first defensive tactic would be to drown the predator, when there is no water nearby, a muscular kangaroo can defend itself with its limbs.

Their preferred means of defense is to grab the dog with their forelimbs and attack with extreme force and large claws on the end of their hind limbs. A female kangaroo, joey, or wallaby may flee from dogs in fear of losing their life.

There is also a possibility that kangaroos can get along with dogs, but only if they are raised together. That way, they can grow up understanding each other, not seeing each other as the hunter and the hunted.

Kangaroos usually do not attack humans unless previously provoked or cornered. They are herbivores, so they don’t go looking for prey or eat their victims. If you want to observe a kangaroo, do it from a safe distance. As long as you do not endanger them and keep your distance, a kangaroo doesn’t have any reason to attack.

People find kangaroos as friendly creatures, but if provoked, they can be quite offensive and dangerous.

Interestingly, kangaroos don’t just attack; they give a warning before they do. When a kangaroo stands up on its hind legs, it is a sign that it feels threatened, and one should back off, or they’ll get hurt.

Keep in mind that they cannot tell the difference between their fellow kangaroo and a human being. They see anyone or anything in their personal space as a threat, and they will lash out aggressively.

Also, many kangaroos have taken a liking to human food, such as fries found in trash cans or on the streets. So if they see a potential snack, they tend to be aggressive towards the person standing between them and their newfound meal.

This is why parks and tourist attraction centers close to kangaroo habitats have placed a ban on food.

As with every large wild animal, one needs to exercise caution around kangaroos. Kangaroos are typically docile animals, but they can be very unpredictable when threatened. Kangaroo attacks are rare but likely.

And although co-habitation with kangaroos can be a peaceful one, it is not encouraged. Try as much as you can to stay away from kangaroos if you don’t have to be around them.

It is advised that one gives a kangaroo as much space as possible, even when on wildlife adventures. And if you come too close, move away slowly and carefully.

However, if the kangaroo becomes aggressive, slowly drop to the ground and curl into a ball. Hold still and stay calm until it moves away.