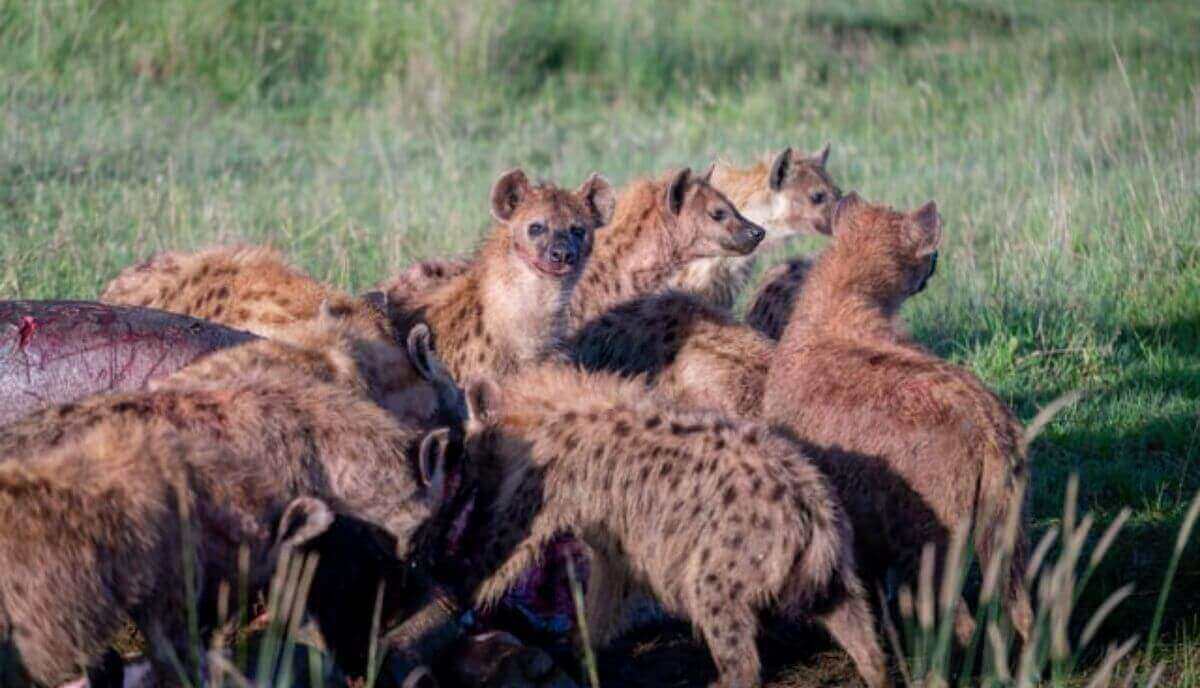 One of the most successful hunters in the world, and the most common large carnivore of Africa, hyenas have always been an interesting topic for discussion.

Of the three different species of hyenas – spotted, striped, and brown – the spotted ones are the largest and most widespread. Their hearing and night-time vision are excellent, which are important hunting attributes.

So, do these qualities make them a threat to humans? Are hyenas dangerous?

Yes, hyenas are quite dangerous animals, especially spotted species. Hyenas are most dangerous when protecting their young and territory. The bite force of spotted hyenas is 1100 PSI, powerful enough to shatter bones. They tend to attack the easiest prey, like children and women, and their conflict with humans is more on the rise with the increasing population in Africa.

Though hyenas are commonly thought to be scavengers that feed on the remains of prey hunted down by other animals, there are various incidents that demonstrate that they can be highly dangerous and efficient hunters.

Yes, hyenas do attack humans, and there are several records of the same. Hyena attacks on humans are often known to happen during the summer months, when the animals migrate long distances due to the scarcity of food and water, looking for food wherever they can. And while their easy targets happen to be children and elderly adults, when hunting as a pack, hyenas can easily take down a perfectly healthy and strong human as well.

By now, it should be no surprise that hyenas are highly capable of killing humans. But do they eat humans? Yes, they do, sometimes! More frequently when they face food scarcity.

While the occurrences of hyenas attacking adult humans are rather infrequent, these animals are powerful enough to do the same.

Hyenas, in packs, are widely known to feed on corpses, including those of humans; but, the instances of these animals hunting down and devouring humans are quite rare.

If the prey is abundant, hyenas would not hunt humans as their primary food source. Their diet is based on lizards, snakes, birds, and mammals.

So, as long as their natural food is available, hyenas will not target humans.

How to Protect Yourself When Hyenas Attack

If the movies and cartoons were the only places where you have seen hyenas, you are most likely to underestimate their size and strength. In reality, hyenas are larger and stronger than you can imagine, weighing up to 190 lbs.

Not just that, their jaws are known to be among the strongest, with the ability to crush bones effortlessly, to the point that they feast on every last titbit of their prey, down to the bones.

So, in order to stay alive if you happen to come face-to-face  with a hyena (hopefully not), here are a few tips to protect yourself:

DO NOT Run Away

Hyenas are predators, which means their instinct is to chase anything/anyone that runs away. So, if you come across one, face-to-face, remain calm and stay put rather than trying to run away.

If it seems to be curious about you and comes forward towards you, take a few steps towards the animal, giving it the impression that you are a predator.

Spread out and start waving your arms, make yourself look big, and scream or shout loudly to make the hyena feel threatened.

Make yourself look aggressive, and the animal will think that you are looking to attack it and is more likely to run away.

Hyenas generally scavenge for easy meals, especially when they are not in packs.

Therefore, if you happen to have any food on you, throw it to the animal, away from you. If it seems to show interest in the food, this is your chance to move away slowly, while always facing the hyena.

Also, do check to see if there are any garbage cans or dead animals around you. It is possible that the hyena followed the smell of these and met you by chance! In this case, keep facing the animal and move away slowly and steadily.

If the hyena does not run away, remember to hold your spot, if it seems to be challenging you with signs like giggling and growling. Make sudden threatening noise or movement, and use any item you have, say a plastic bag, to make a noise.

Why Are Hyenas Dangerous?

Hyenas are always labeled as scavengers and thought to feed on dead animals that other predators, like cheetahs and lions, work hard to hunt. But, they are extraordinary hunters in their own right, which means they are extremely dangerous.

Here are the main reasons why hyenas are so dangerous:

Contrary to the widespread belief that hyenas only scavenge, 95 percent of the food they consume comes from hunting.

Individually or as a pack, their hunting efficiency is second to none of the top predators, including lions, leopards, and cheetahs. They can easily devour the remains of a large prey within minutes.

Hyenas are also fast, with the ability to run at a speed of up to 30 miles per hour.

This speed, along with their strength, makes them one of the top predators of the wild. So, NO, do not even think about outrunning a hyena!

Hyenas are grouped into territorial groups, which operate around their den where they raise their little ones.

Avoid hyenas’ territory! If you happen to be anywhere around their territory, especially when there are cubs involved, hyenas can get a lot aggressive and can threaten or even attack you in an instant.

Hyenas have jaws so strong and powerful that a single bite can kill and completely crush bones.

With the ability to apply a crushing power of more than 1000 PSI, they can and will tear open the flesh of any animal with a single bite.

Besides, hyenas are extremely intelligent, which adds up to their cunning killer abilities. The best way to survive a hyena attack is to avoid encountering one in the first place.

Though your chances of coming face-to-face with a hyena outside of Africa are less, know that these animals are not cowardly scavengers that they are widely portrayed to be, but rather efficient hunters that you want nothing to do with.