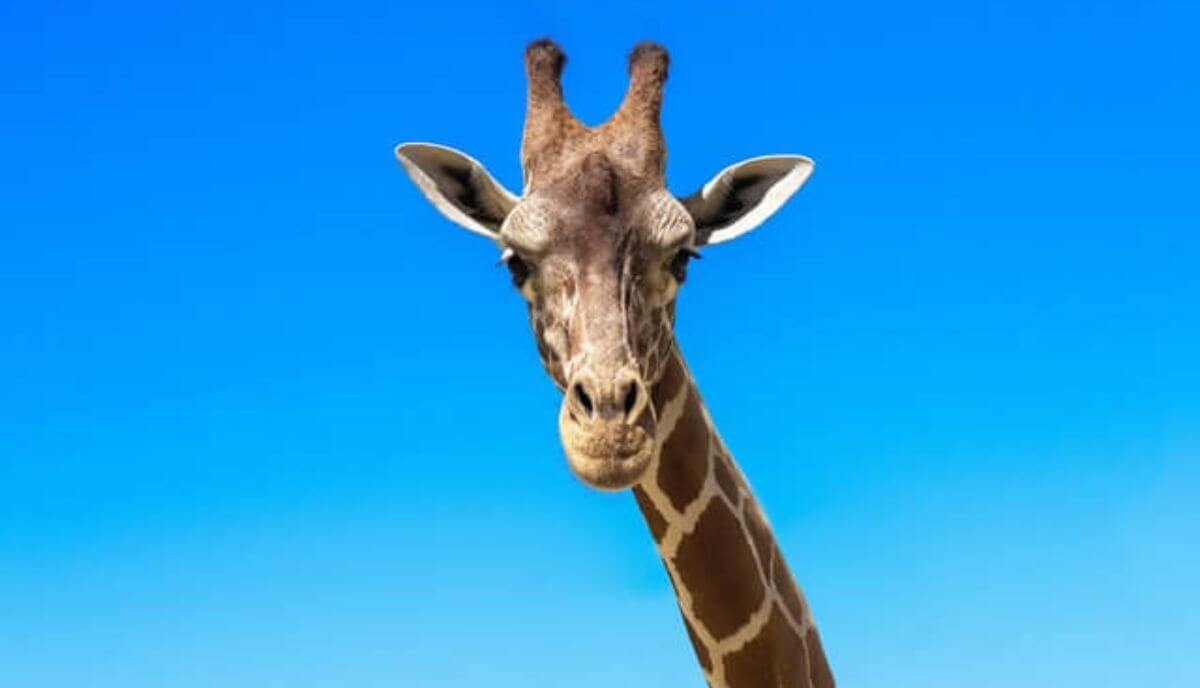 Giraffes have the reputation of being gentle giants. Still, they are the tallest terrestrial animals in the world, which may lead to a question – are giraffes dangerous to humans?

Despite having peaceful nature, giraffes can potentially be dangerous to humans because of their size. Adult giraffes can reach 18 feet in height, and their leg kicks can be deadly to their predators. However, giraffes are not predators, and they only attack in self-defense or when protecting their young ones.

When do Giraffes turn into Dangerous Animals?

While they usually do not represent a danger to humans, there are specific scenarios when these giants can be lethal.

Giraffes, like any other animal in the wild, may launch a self-defense attack when they feel threatened by something in their habitat.

However, more often than not, giraffes avoid confrontations when under threat by another predator or a human in their habitat.

These giants can reach speeds of 35mph, so fleeing from the danger is always an alternative.

Yet, when peace is not an option, giraffes will stand their ground and fight their enemies.

Giraffes are social animals, and they can be particularly dangerous when they are around their babies.

A female giraffe is overprotective of its young ones and would fight any predator in order to protect them. In fact, giraffes tend to stay on edge more than ever when guarding their little ones.

It is essential not to go close to adult giraffes when their baby is around them, as you do not want them to perceive you as a threat.

Giraffes get startled easily, and when they feel spooked, they can cause chaos. It is pretty standard for non-predatory animals to stay alert when they sense imminent danger.

Sudden movements, running, and shouting may make a giraffe see you as a predator, and it may choose to attack in order to defend itself.

In some rare cases, giraffes are also found to fight for food if they deem it to be worthy of a fight.

You can expect a dangerous battle between their species in such a scenario.

Giraffes are usually not aggressive unless they or their babies are in danger. When in aggressive mode, giraffes use their powerful legs to tramp and kick their intruders. However, male giraffes are known to be aggressive toward each other during the mating season.

Males typically fight one another to claim dominance or mating rights.

Known as ‘necking,’ giraffes use their necks and heads to hit each other like a wrecking ball.

Still, most of the time, the fights end up when one of the males retreats and admits the defeat.

Giraffes usually do not attack humans, but there have been a few reported cases of attacks on humans throughout history. Giraffes are not predators, so people are not part of their diet, and if they are left unharmed in their natural habitat, they almost never attack.

However, if giraffes sense imminent danger or threat to themselves or their young ones by a human, they would not hesitate to kick using their vast legs to neutralize the threat.

Giraffes can throw a kick literally in any direction, so there is no way to escape once you are being attacked by the animal. A single successful kick is all they need to kill even the apex predator of the wild, a lion!

However, human attacks are pretty rare, apart from a few incidents every once in a decade, which usually happen because of the careless behavior of humans.

AllAfrica website reported a story in April 2015 about a cyclist who was allegedly attacked and killed by a giraffe in Bela Bela. Col Ronel Otto had reported that guests discovered the body of the man at the Thabo Monate Game Resort one Sunday afternoon.

The cyclist, Braam Bosse, had gone biking alone on the grounds of a game lodge. The reason for the attack remained unknown.

These long-neck giants are not the deadliest land mammals in the world; if left alone in their surroundings without causing any harm or disturbance, giraffes will remain friendly and peaceful.

Can a Giraffe Kill You?

Yes, a giraffe can kill you. Even though they are often known as the gentle giants of nature – giraffes have the power to kill a person. Giraffes use their legs and heads to attack and eliminate the threat looming around them and their family.

It is always advised not to touch a giraffe even in the zoo because mammals do not like being touched.

Several incidents have occurred in the past in which giraffes have kicked and killed hikers, wild bikers, and other individuals.

Lieutenant-Colonel Moatshe Ngoepe reported one such case – A spokesperson of the provincial police said how a giraffe kicked a farmworker in the stomach, leading to the fatal scenario.

When the giraffe attack occurred, the 49-year-old farm worker was feeding some animals at a local safari lodge. The paramedics were summoned to the scene to resuscitate him, but he was later declared dead.

Also, in 2018 – an award-winning South African filmmaker – Carlos Carvalho, died due to injuries sustained when a giraffe head-butted him while shooting a film at Glen Afric country lodge.

Yes, giraffes can bite, but since they are herbivores, they do not use their teeth to attack other animals. A giraffe’s mouth and teeth layout are not designed to bite other creatures. They only chew on vegetation and crunch on them and do not have sharp teeth either to bite on hard pieces.

Most of their teeth are on the bottom, with only a dental pad on top. Their teeth are made for eating fruits, twigs, and leaves of apricot trees, acacia, and other plant-based food.

Interestingly, giraffes are found to eat for the most part of the day. They collect a small number of leaves with every bite and with very little sleep, and staying awake at all times only gives them all the time in the world to chew on leaves.

Giraffes only use their tongue to collect their food and not their teeth to bite, which is not amusing, considering their 21-inch-long tongue.

In Summary – Are Giraffes Dangerous?

In summary, giraffes are usually peaceful animals that do not represent an active threat to humans. However, due to their size and strength, giraffes can be very dangerous, especially when they feel threatened. When in defending mode, giraffes are known to use their powerful legs as weapons against their enemies.

Therefore, one should only approach or touch a giraffe if instructed by a giraffe keeper or someone who understands the animal’s behavioral pattern. If you wish to take a photograph of the giraffe, there is a need to disable the camera flash because it can startle the animal.

Giraffes are part of the vulnerable land mammal species, and it is time that we took all the necessary steps to conserve these beautiful animals. In their home Africa, the number of giraffes is lower than the number of elephants, showing their current plight.

Thank you for reading. With this, we conclude the “are giraffes dangerous to humans?” article.

If you liked this post, here’s another recommended read: Are Basking Sharks Dangerous?