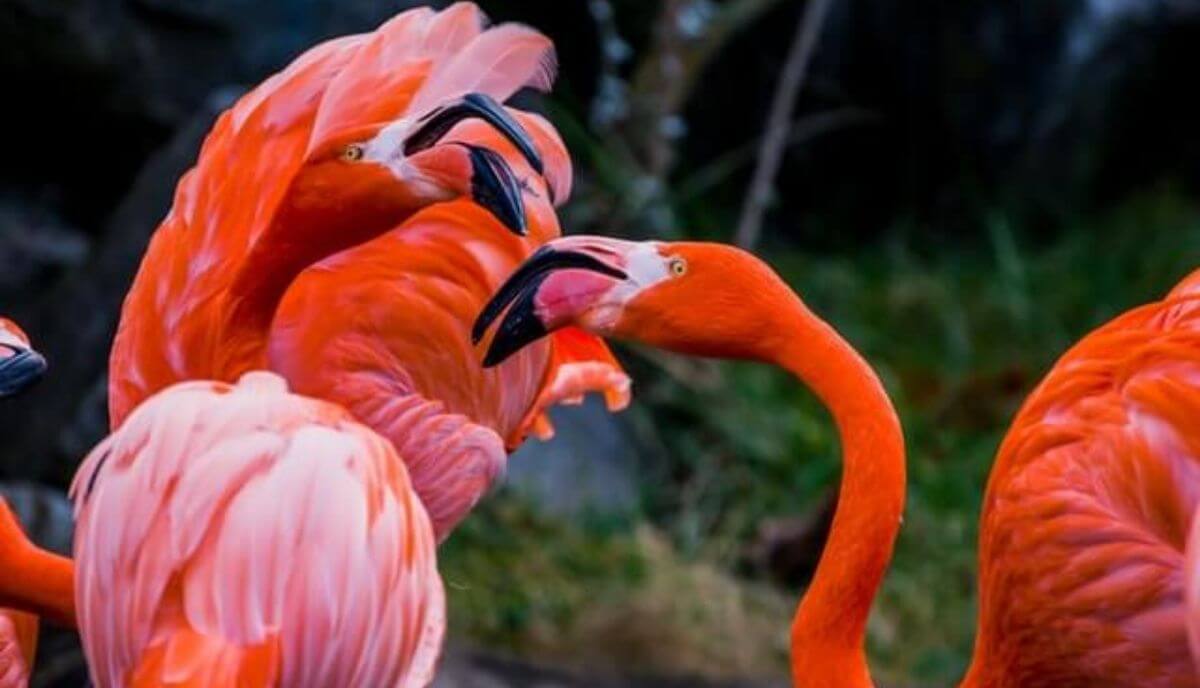 Flamingos are beautiful birds that are known for their pink feathers. They are found in parts of Africa, South America, and Europe.

A question you may have is, are flamingos dangerous; do they attack humans?

Flamingos are not particularly dangerous as they are naturally calm animals that can live peacefully with humans and other birds. However, flamingos may attack you if they feel threatened or if they consider you a danger to their nest. It is not uncommon for humans who get too close to flamingos to be attacked.

Luckily this is not often the case, as some flamingo species are huge and can reach a height of up to 4.9 feet. When protecting themselves, flamingos use their beaks and legs to damage their enemies.

How Dangerous Are Flamingos?

Despite not being particularly dangerous, you should remember that flamingos are wild animals, and so they require your respect and space. A peaceful flamingo can turn into an aggressive one and attack you. However, there have been no fatalities reported from flamingo attacks.

While flamingos are not inherently dangerous, they protect their space and do not like it when humans and other animals invade it.

This is why even when you see them in the wild, it is best to keep your distance and not try to feed or touch them. Feeding a wild animal like this is dangerous since it may view you as a threat to their food.

As a result, the flamingo may attack you in a move to get more food.

Flamingos have sharp curved beaks and claws, which they use when attacking a possible threat. They may scratch and peck you when they consider you a danger.

They also use their huge wings when advancing towards you. While it is unlikely for the attack to be fatal, you may end up with some scratches and wounds from the pecking.

Flamingos are not naturally aggressive birds compared to others that live in the wild. They will not go out of their way to attack you for no reason. You can get pretty close to flamingos, and they will not feel the need to be aggressive towards you. However, they can show some aggression when they feel threatened.

One of the most common reasons a flamingo may show aggression is when you get too close to them or try to touch them. They may feel threatened by this and may cock their head in your direction as a warning.

If this doesn’t work, they may peck, scratch or attack you with their wings. If you find yourself in such a situation, you should slowly remove yourself.

Another case where a flamingo may attack you is when you get too close to their nest.

Flamingos don’t usually go too far from their nest, so even if you see one unattended, one may still be close. A flamingo may become aggressive towards you to protect their eggs and, in some cases, their young.

People like flamingo eggs for eating and making traditional medicine. Taking flamingo eggs is one of the reasons why some of the flamingo species are endangered.

Yes, flamingos use their beaks to bite and peck whenever they feel threatened. Their beaks are pretty sharp, which is why you may end up with bite scratches on your body. However, these are usually not very bad, so you may not need urgent care or anything of the sort.

This is because brightly flamingos are generally healthier and stronger than their pale-colored counterparts. Flamingos get their color from the food they eat.

So, if they feed on richer diets, they will be healthier. This diet usually includes some small fishes and animals as well as plants.

These brightly colored flamingos are likely to leave you with bad bruises when you encounter them. This is because they are not only stronger but more confident in their environment.

And consequently, they are more protective of their space, so it is best to stay away from them.

Read Also: How Dangerous Are Emus?

Flamingos rarely attack humans. Flamingos would rather go about their business than attack humans since they are not naturally aggressive animals. However, they will launch a full attack on people when they feel threatened. Therefore, the best way to avoid an attack by a flamingo is to keep away from them.

You can still see them clearly and appreciate their beauty from a distance.

Flamingos have a calm disposition towards other animals and even human beings. However, they can be dangerous when provoked; hence they will attack.

Provoking flamingos includes touching them, going too close to their nest, disturbing them when trying to get a mate, and even keeping them away from their food.

Can Flamingos Hurt You?

Of the rare number of attacks by flamingos that there have been, it is rare to find that they badly hurt someone. This is because flamingos often stop attacking once you get away from them. So, you may get away with a few minor injuries.

In addition, it is not common for them to continue to pursue you like it is with some other wild animals. That being said, it depends on how aggressive the bird was towards you.

It is possible to have more severe injuries if the bird is bigger and angry at you. The claws, in particular, are pretty sharp, so they can dig into your flesh, causing you to bleed.

As a result, you may need to go to the hospital and, in some cases, need stitches, but the wounds should heal quite well over time.

You May Also Like: Are Eagles Dangerous to Humans?

Do Flamingos Attack Each Other?

Yes, it is not uncommon for flamingos to attack each other. The main reason why flamingos would attack one another is when fighting for food. This is especially the case when one has caught some fish or other food fed by humans.

Usually, the bigger ones are more dominant; hence more often than not come out as winners.

Also, male flamingos may attack one another when trying to impress a female. The female usually wants to mate with the strongest of the two, so they may decide to fight it off when the competition gets too stiff.

As mentioned earlier, the brighter flamingo tends to be more aggressive, and it is usually the one that fights the most.

In Summary – Are Flamingos Dangerous?

Flamingos are not particularly dangerous or aggressive, but they can get out of their comfort zone when provoked. It is important to remember that while they may look so beautiful, they are wild animals, so it is best to give them their space. This will prevent any attacks, and you can appreciate nature from a distance.

Thank you for reading. Now, if you get asked: are flamingos dangerous –  you know the correct answer.

Here’s a recommendation of a similar article: Are Penguins Dangerous?