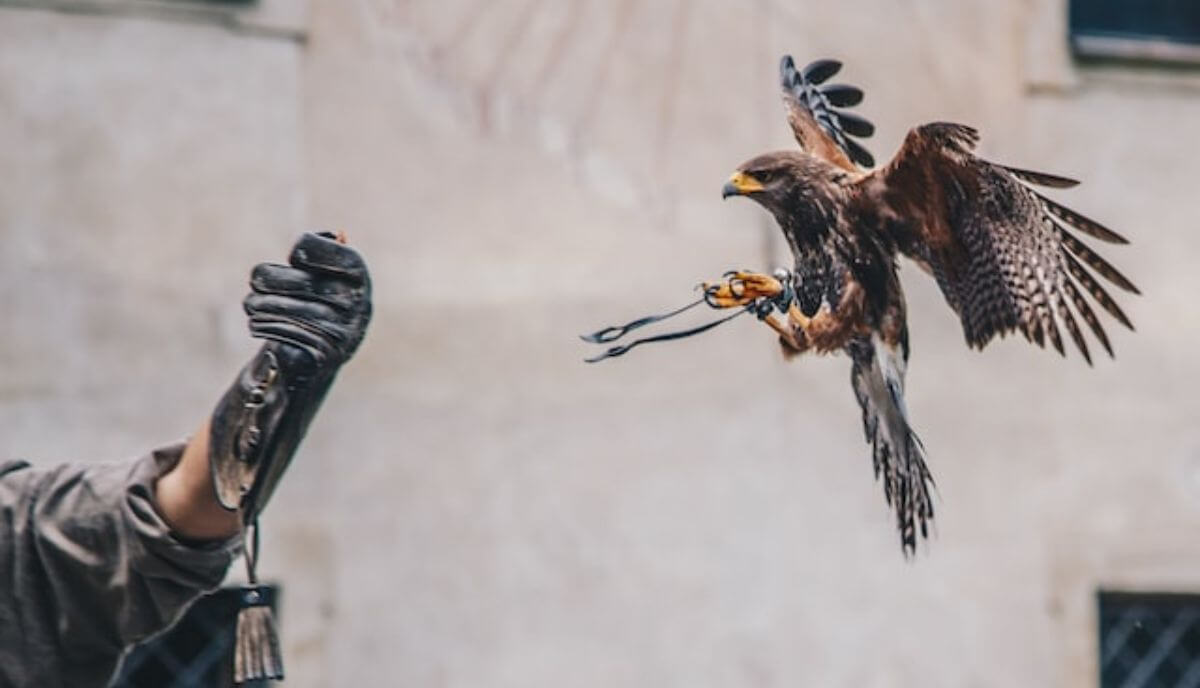 From the largest snowy-white gyrfalcon to the smallest 3-ounce American kestrel, all of the over 40 species of falcon worldwide are formidable predators.

Equipped with large, powerful talons and razor-sharp hooked beaks, perfect for slicing through flesh and bone, these birds are revered throughout the world with good reason.

But are falcons dangerous to humans?

Falcons do not directly threaten people, but they can be dangerous when protecting their chicks. Falcons are very territorial and protective; if people come too close to their nest, they may become aggressive. However, most conflicts between humans and falcons result in minor injuries.

Falcons are smaller than many other birds of prey, such as hawks and eagles, but exhibit a wide range in size, from 3 ounces (85g) to 4.5 pounds (2kg).

However, all possess long, sharp claws and extremely strong beaks, which they use to crush the spines of their prey.

The peregrine falcon, the fastest bird on the planet, dives at its prey with incredible speed, killing it on impact.

The gyrfalcon, the largest of all falcons, does not need speed but rather uses raw power to kill animals as large as geese, hares, and even other raptors.

Falcons are undeniably formidable predators, renowned for their speed, intelligence, and ferocity. As such, they have been used and trained as human hunting companions for thousands of years.

Despite this, most falconers agree that they are untamable and are only reliable through extensive expert training. Even then, falcons remain independent and sometimes decide not to return to the falconer’s arm.

Escaped, trained falcons have lost their fear of humans and sometimes of dogs or other hunting companions and will make less effort to avoid them.

One, albeit highly unusual, case saw two escaped trained falcons attack a Labrador in a neighbor’s backyard. The falcons harassed the dog for some time until the owners managed to get it inside.

It is unclear why the falcons decided to attack the dog, as this is not normal behavior. Still, it is believed to be the result of some past experience they had involving dogs.

Falcons very rarely attack humans. These birds of prey generally avoid humans, as we are one of the few species which pose a threat to them. However, if a person wanders too close to the falcon’s nest, the bird may feel threatened and even decide to attack, if necessary.

Falcons are highly territorial, particularly when protecting their nests or young. Aggressive falcons will fly near the intruder’s head and scream high-pitched cack-cack-cack tones, which should be a sign that you must step away.

Understandably, the parents invariably do their best to protect their babies; if you do not leave immediately, they may swoop at you with their talons out.

Even though falcons have no long-lasting care for their babies, until they are in the mature phase, parents will try to protect them even from much larger enemies, including humans.

Most attacks on humans by falcons occur when researchers or conservationists need to access nests to weigh and tag the chicks.

What to Do if a Falcon Attacks You?

In the unlikely event that you are attacked by a falcon, the most important thing is to remember that you are much bigger and stronger than these birds. They already know this and are likely only attacking you because they are trying to protect their nests.

It is important to back away and give them space, but do not turn your back!

Falcons are predators and prefer to attack from behind, where the prey is most vulnerable, so turning your back will make them more likely to seize the opportunity.

Falcons are naturally afraid of humans and dislike loud noises. In case of an attack, make yourself appear bigger and scarier by waving your arms around and shouting (yes, you will look ridiculous, but it will work).

A falcon is unlikely to be able to kill a human, but its razor-sharp claws and beak are capable of inflicting deep and painful wounds.

Be sure to protect vulnerable areas, particularly your eyes, face, and throat, using your arms, hands, bags, jackets, or other clothing.

Can Falcons Hurt You?

Larger falcons are physically capable of inflicting injury on humans, particularly deep gouges from their beaks and gashes from their claws. If they happen to land a blow in the eyes or throat, the consequences could be dire.

However, there has never been a recorded case of a falcon killing a human, and in general, attacks are rare.

Falcons only attack when threatened; as mentioned, the highest probabilities are when someone gets too close to their nest.

Such attacks are usually more of an intimidation technique than an attempt to cause real injury and generally stop when the “threat” leaves the area.

Besides the researchers, other people at risk are hikers and rock climbers who inadvertently invade a falcon’s home.

What is the Most Dangerous Falcon?

While the gyrfalcon is the largest falcon, the peregrine falcon is considerably more aggressive and dangerous since it is responsible for more attacks on humans.

Peregrine falcons are also the fastest-moving creature on the planet, reaching dive speeds of up to 240mph (386kph). Along with their impressive claws and serrated beaks, they are the ultimate predator.

Most dogs are too big to be the prey, so attacks on dogs by falcons are rare, though not unheard of. Dogs may be subject to the same kind of territorial attacks as humans if they get too close to a nest or a recent kill.

While falcons of all species are undeniably impressive hunters, they pose little threat to humans. Like most animals, we are more dangerous to them than they are to us, and they, understandably, do their best to avoid us.

When this is impossible, because we force our presence on them, they may defend their territory, first with intimidation and last with a physical attack.

Larger, more aggressive falcons, such as the peregrine, may be capable of inflicting serious injury, but this is extremely rare. Mostly, they just want to be left alone.

So what is the best way to avoid a falcon attack? Leave them alone. Admire them, watch them, enjoy them and protect them, but with respect and from a distance.

Thank you for reading. If you liked this article, here’s a recommendation for a similar read: Are Swans Dangerous?