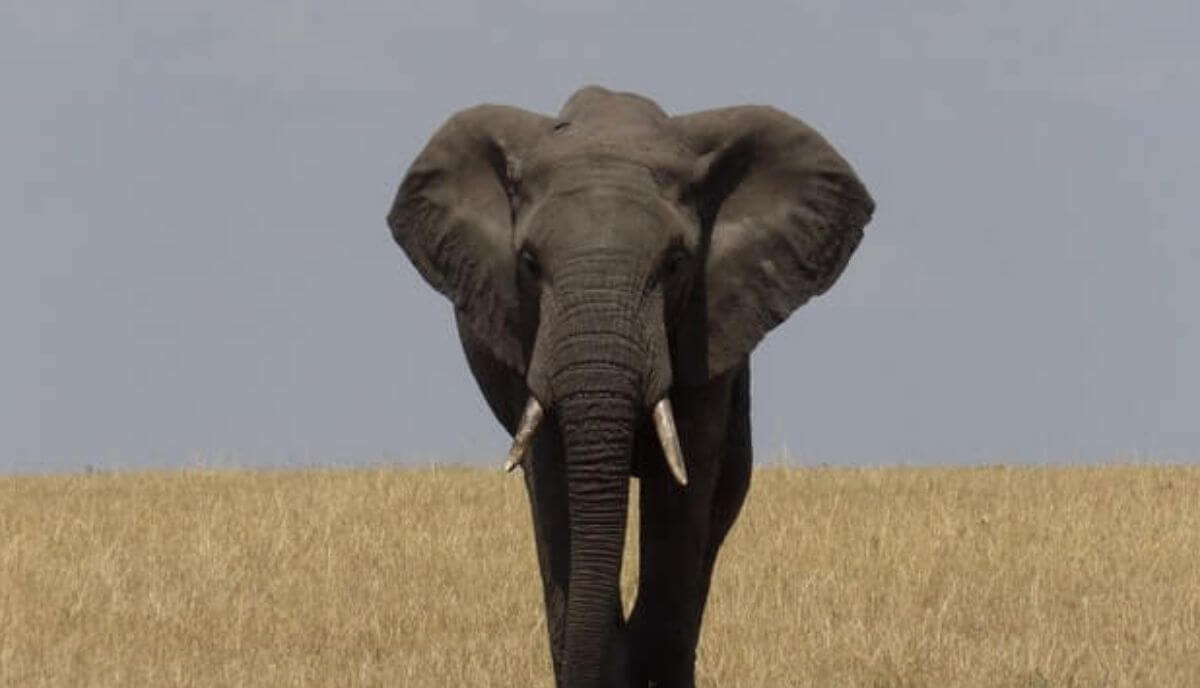 Elephants are known to be one of the most emphatic and kind species in the whole animal kingdom. There are dozens of videos online displaying their sensitivity and caring behavior both towards people and other elephants.

However, considering their size and strength, one may wonder – are elephants dangerous?

Although they are not an active threat, elephants can be dangerous to humans. They are the strongest and largest land mammals on earth, and sometimes they are deadly too. However, elephants rarely attack humans or other animals if not previously provoked. The majority of attacks on people are related to self-defense or the protection of their calves.

When they feel challenged or threatened, elephants react in different ways; they tend to make noise and fuss to show their dominance; to show their strength, male elephants often mock-charge; they spread their ears out and start flapping, looking straight at the threat; and they also raise their head and trunk to let the enemy know that they are dangerous.

Some other defensive actions of elephants can include: upset trunk movements, swinging their foot, avoidance, breaking off branches, etc.

To demonstrate their strength and dominance, elephants may run at humans, which sometimes can turn out to be a real charge. Mock charges, in most cases, are stopped before they reach their threat/target; but, if an elephant continues its charge, it can easily kill a human.

It is best to avoid causing an elephant any pain or agony, as it could cause them to charge. As for female elephants, it is important to respect their space and not make them or their calves threatened.

Yes, elephants do attack humans. Regardless of whether you are dealing with a domesticated or wild elephant, the animal can get violent and can cause serious injuries. One of the main reasons behind elephant attacks on humans is the encroachment of their habitat by human civilization. Also, elephant attacks occur in situations when the animal is feeling unsafe.

And how do elephants attack? There are a lot of different ways, some of which you might be aware of and some completely unexpected:

How to Survive an Elephant Attack?

Before learning how to survive an elephant attack, you should be able to recognize between the two types of elephant charges – bluff/mock and attack.

To survive an elephant attack here is what you should do:

But, if you can see that it is an attack charge and you are actually in trouble:

No, elephants don’t eat humans, as they are herbivorous by nature. However, there has been a report of a female Indian elephant having eaten a human after her calf was threatened by the local villagers. This rare case of the human-eating elephant is extremely uncommon, and it can be attributed to a protective maternal instinct.

Animals that feed and hunt other organisms are carnivores and predators. Elephants are not predators. Instead, their diet consists of vegetables and vegetation.

These giants are true vegetarians, and their favorite food includes roots, flowers, twigs, barks, leaves, shrubs, grasses, etc. Their diet may vary depending on the species and region they live in, however, their diet is strictly based on plants regardless of their environment.

Elephants have humungous requirements when it comes to food and water – requiring up to 300 pounds of vegetable matter and 200 liters of water a day. As a result, they are attracted to human agriculture as a great food source, which is when they come in contact with humans, and some of these accidental encounters end up being fatal as well.

However, elephants do not see humans as a food source, and these harmful encounters are related to self-defense and other mentioned reasons.

What Makes Elephants So Dangerous?

Now, when we’ve learned why and when elephants may pose a threat to people. Let us see what makes these giants so dangerous.

One of the main and most obvious reasons that make elephants so dangerous is that they are huge. These animals can grow as tall as 13 feet and weigh over 15,000 pounds. With this heaviness, they can easily crush, throw, or beat up a human, if/when they feel threatened.

Elephants are extremely intelligent animals. In fact, it has been found that they can realize how dangerous a threat can be from just how they speak. They can read your body language and have clear behavioral responses in different situations.

As intelligent, smart, charming, and graceful they can be, elephants are also unpredictable. Sometimes, elephants can get aggressive and charge for no reason at all, which makes them highly dangerous to humans.

In Summary – Are Elephants Dangerous?

Despite having docile and non-aggressive personalities, elephants can/may be dangerous to humans in certain situations. The most usual cases of elephant attacks on humans are linked with animal survival instincts.

For example, when they are cornered or endangered in any way, elephants will become aggressive and dangerous. The best thing you should do to avoid an elephant attack is to treat these giants as every other wild creature, regardless of their peaceful nature.

Thank you for reading. I hope you have learned something new today, or at least got the answer if someone asks you: “are elephants dangerous”?

For the very end, I would like to recommend you a read from the same category – Are Penguins Dangerous?