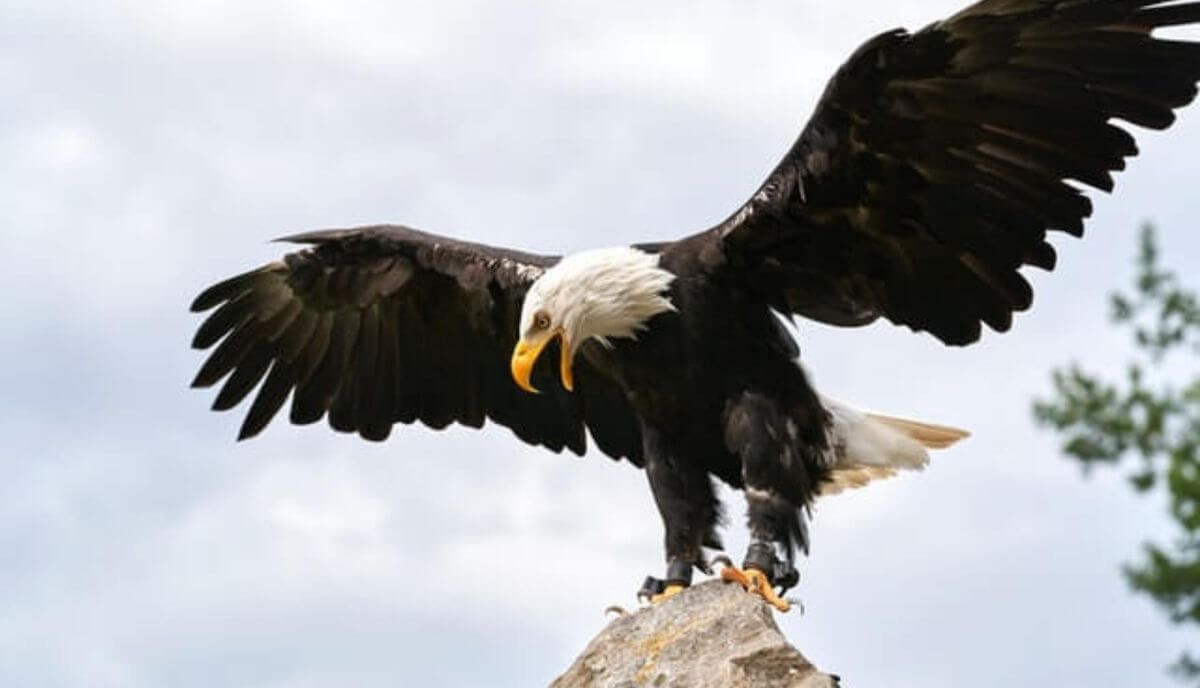 While many people are fascinated with eagles, others are not so much fond of them. For me, they are one of the most majestic creatures on our planet.

But, whether you like or dislike them, you’ve must have wondered – Are eagles dangerous? Do they attack humans?

Eagles are some of the most dangerous birds of prey adapted to hunting and killing other animals. Most eagles become more aggressive during mating season, and in that period, they are more likely to attack. Eagles are also very territorial birds, and in case someone invades their space, they may protect themselves by leashing an attack.

Yes, there have been instances where eagles have attacked humans, but this is not common, so you shouldn’t be afraid that an eagle will attack you in the wild for no reason. In most cases, people that had been attacked by an eagle mostly ended up getting only scratches or other minor injuries.

However, in the majority of reported incidents, the humans provoked the bird in one way or another. One common event is when humans get between the eagles and their food. For example, when out fishing or hunting, especially small animals like rabbits and birds.

Another instance where an eagle may attack a human is when they feel threatened. For example, some people may try to hunt eagles by throwing rocks at them to bring them down. In such a case, the bird will have no other choice than to fight back by clawing or pecking the person.

Eagles also attack humans who invade their space, especially during mating season. Bald eagles are quite territorial when they are about to mate. So, people who get close to them during this season may be attacked and will sustain some injuries.

When eagles attack humans, they usually go in with their claws; they will peck the person in some cases. The injuries sustained from an eagle attack may be painful, but they are hardly ever severe. There have been no reported cases of someone being killed by an eagle.

Can an Eagle Pick up a Human?

While eagles are quite large and strong, they cannot pick up an adult human or teen. The maximum weight that eagles can carry in their talons is 5 to 6 pounds. There have been reports of an eagle in Ethiopia having snatched a baby, but this remains unverified.

Eagles are quite powerful birds of prey, but they usually fear people, and unless they are provoked, they prefer to stay away from us. Eagles know that people are potentially dangerous, but more so, they fear that people are much bigger than them. For this reason, eagles do not ever try to pick a human up.

They would need strength out of this world in order to lift an average human who weighs about 150 pounds. Imagine a bird that flies over your house with a fully grown person trapped in its talons. That seems unreal even in a sci-fi movie.

In reality, eagles are careful of human beings. In most instances, they would fly away rather than confront.

Eagles are opportunistic predators, and if they get the chance to eat human flesh, they will eat it. However, eagles will not hunt humans as we are not an obvious source of nutrition for them. An eagle’s diet mainly consists of fish, lizards, small mammals, and other birds.

Most eagles rarely attack prey that is bigger than themselves. The only eagle species that are specialized in hunting large prey are crowned eagles.

Crowned eagles are the most powerful eagles in Africa, and there have been cases when they attacked small children.

However, an incident in which an eagle would attack a person as a food source occurs very, very rare. This may only happen when the bird is extremely hungry without any other food source.

How to Avoid an Eagle Attack?

If you see an eagle close to you, there are a few ways to avoid them from attacking you.

Related: How Dangerous Are Owls?

FAQs on How Dangerous Are Eagles

In this section, we are going to cover some of the most asked questions about the eagle’s dangers.

Yes, eagles are one of the most aggressive birds in the wild. But their aggression is seen when they hunt and kill prey. However, eagles are not typically not aggressive towards humans, and as long as you stay away from their nests and do not provoke the bird, you should be safe.

Of all eagles, bald eagles like humans the least, and they are the most likely species to behave aggressively towards them, especially during mating season.

Whenever people come too close to their nests, they take it as a threat and may act aggressively.

The best thing you should do to stay on the safe side is to keep yourself at a safe distance, just like you would do with any other bird of prey or wild animal.

Do Eagles Attack Dogs and Cats?

Eagles have been known to attack dogs and cats outdoors, but it doesn’t happen often. Other than when threatened, the only other reason why an eagle may attack is when hunting. However, eagles don’t typically hunt dogs and cats because they are not a primary source of nutrition.

Experts say that eagles prefer white meat to red unless that is the only available option. It is highly unlikely that an eagle will attack your cat or dog out of nowhere.

However, if your pet may have food in their mouths that the eagle wants, they can be attacked.

On the other hand, it depends on how hungry the eagle is. If it has not had a meal for a while and there are not many options, your pet may be an easy hunt for them since they will typically not put up a fight.

Although It will probably target small cats and dogs, making it easy for them to snatch up.

This eagle can grow to over 41 inches in height, and weigh up to 20 pounds. However, don’t overlook them because of this small weight since they are still pretty huge. Their wingspan is 7.4 feet, meaning they are much longer than an average person.

They are incredibly strong, having a grip strength of about 530 psi. This is higher than most birds and mammals, meaning that they can crush a skull like a watermelon if they want to.

Also, these birds have talons that are so incredibly long, reaching lengths of 5 inches, so they are as large as those of a grizzly bear. All these features make it the scariest bird on the planet, so don’t mess with it.

Wrap up – Are Eagles Dangerous?

Eagles are quite dangerous birds, so it is best to stay away from their nests and not provoke them, especially during the breeding season. However, most eagles are more afraid of you than you are of them, so they won’t attack you if they don’t feel threatened. In case you notice one coming towards you, find shelter as fast as possible.

At the end of the day, eagles are just like any other predatory animal with wild instincts. To reduce the potential attack to a minimum, you should keep yourself at a safe distance and never make the bird feel threatened, especially during the breeding season.

If you liked this type of post, here’s a recommendation of another popular article: Are Manatees Dangerous?