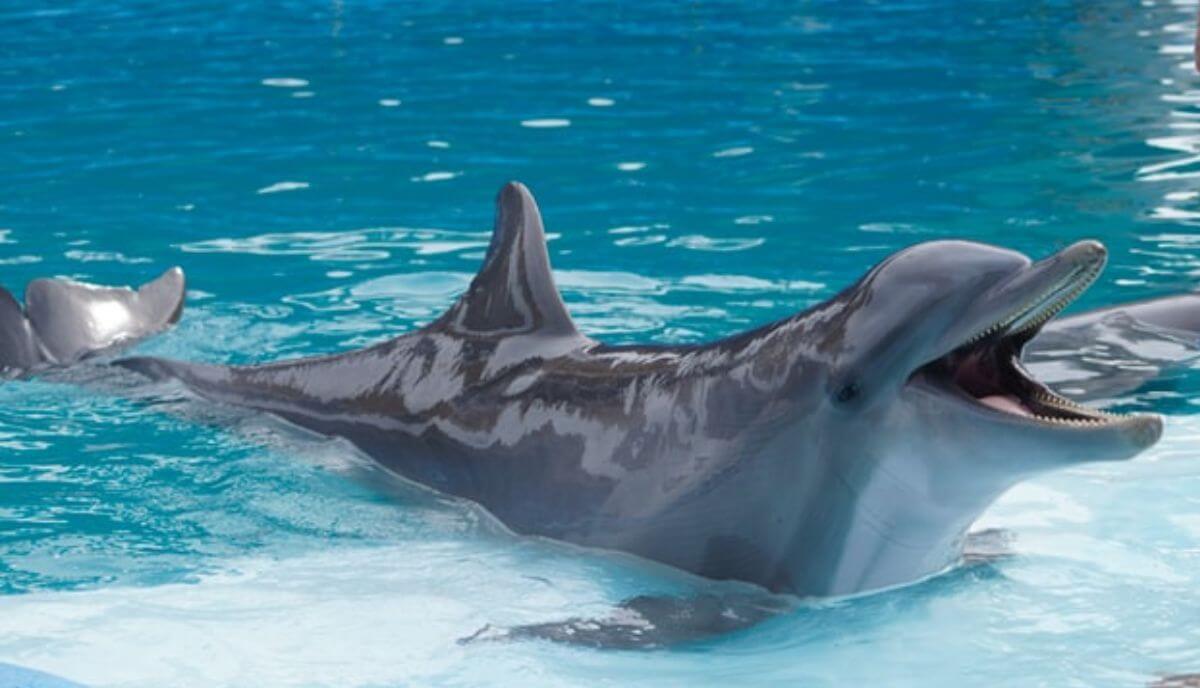 Dolphins are undoubtedly one of the most intelligent and cutest sea creatures on the planet. Their faces look as if they’re smiling, producing the most adorable squeaky sounds that make you go awww!

But if you wonder – are dolphins friendly animals, or is it just a myth? You are in the right place.

For the most part, dolphins are friendly animals, yes. Being curious about humans, dolphins don’t mind interacting with us. Those with kind personalities usually get trained to perform all sorts of tasks and tricks. When under the guidance of a professional, dolphins become very friendly and playful.

However, as with other wild animals, dolphins should be treated with respect and caution. This is particularly true for wild dolphins. When in the ocean, wild dolphins don’t usually approach humans. On the contrary, they avoid contact with us if they sense we’re around.

From the way we see dolphins depicted in films, you could say that these adorable creatures are capable of developing a special connection to humans. But is it true?

Despite their friendly reputation, dolphins are wild creatures, and they don’t really like humans. However, those with more curious personalities are known to approach people. In fact, even in the ocean, their natural habitat, some dolphins come to the shore to be touched out and stroked.

While this is a periodic occurrence (and besides, you should never touch a wild dolphin), the good news is that dolphins can be trained to like humans and interact with them. This is possible by positively reinforcing them with rewards and affection.

For example, rewards can be given when friendly behavior has been exhibited. Aquariums and marine parks are places where dolphins are being trained to become friends and get used to interacting with humans.

So if you want to interact with these marine mammals, these are the places to do so.

When showing affection, a dolphin will touch or rub against you with its flippers or body. Dolphins also commonly make specific vocalizations when interacting with someone, indicating that they have recognized you.

One fascinating case worth mentioning happened between researcher Margaret Howe and the bottlenose dolphin, Peter, in the 1970s.

Howe used the dolphin Peter in her study of how dolphins can learn and communicate with humans in English. Throughout, Howe would spend much of her time with the dolphin, eating, playing, sleeping, and even bathing.

The two developed such a strong bond that Howe described it as a strong emotional connection. In conclusion, from the case, dolphins are very emotional animals that can become intently attached to humans and develop strong feelings.

Since they have huge brains, dolphins possess the strongest emotional intelligence, which means they can easily recognize humans, especially those they often interact with.

Dolphins have empathy and compassion not only for humans but also for some other mammals such as dogs and monkeys.

Because of their compassion, dolphins are known for saving the lives of humans caught in danger at sea. You may have heard that dolphins are the lifesavers of the ocean.

According to studies, dolphins can recognize humans in water using echolocation sounds that help them reconstruct images in 2D and 3D.

Each short click of this high-frequency sound beam assists the creature capture an image, similar to taking photos using our cameras.

How Do Dolphins See Humans?

Dolphins are friendly mammals indeed, but this doesn’t mean they don’t see humans as their enemy. Those of them who are less sociable can easily be bribed with food. Ocean visitors have often reported having amiable interactions with wild dolphins that saw them as their “bribing friends.”

Known to keep the longest memories for non-human species, most domesticated dolphins see humans and trainers as their best friends.

People who go to the water park or the aquarium are usually easily recognized by the dolphins there. A dolphin who recognizes someone wouldn’t attack that person.

On the contrary, dolphins are very loyal animals, especially to people they know. When they see a familiar face, dolphins will show signs of affection and make specific welcoming sounds.

Why Do Dolphins Protect Humans?

While there is no scientific backup of why dolphins protect humans, there are a few reasonable theories.

Here are a few such examples:

Adam Walker, a swimmer, was guarded by a pod of dolphins in April 2014 as he was doing an eight-hour endurance swim between the two main islands of New Zealand. The dolphins spotted a shark trailing behind Adam and decided to circle him, swimming along for over an hour.

Maddalena Bearzi and her team were conducting a study on a pod of dolphins when one broke away from the feeding circle, and the rest followed. The scientists followed the pod for 5km until they found the dolphins circling a distressed 18-year-old girl with hypothermia. She could have died if the dolphins hadn’t found her.

In 2004, a group of divers got lost in the red sea for over 13 hours. Luckily a dolphin pod led the rescue team to their location. The crew said that the dolphins leaped across the prow of their boat in the direction the divers were in.

In 2008, a pod of dolphins protected a local Philippine fisherman from drowning when his boat capsized in a storm. The dolphins may have known the fisherman since he was a dolphin warden.

So whatever the reason may be, these rescue stories further suggest that dolphins are often selfless and protective animals that would thoughtlessly help other creatures, including us humans.

This section will answer some of the most common questions regarding dolphins and their personality.

Are Dolphins Friendly With Other Dolphins?

Yes. Dolphins are social animals, and just like human beings, they identify with groups of friends and family made up of up to 100 individuals. You might find a pod of dolphin friends goofing off and playing.

Cases of dolphin aggression towards one another are rare unless resources are scarce and they have to compete.

Dolphins are very emotional and therefore enjoy being petted if adequately trained. Even some wild dolphins swim close to the shore, where someone can reach out to touch them.

Dolphins, however, have different personalities, and not all of them may desire close contact with humans.

What is the Friendliest Dolphin?

The friendliest dolphin species is the bottlenose dolphin, recognized by its nose that resembles a bottle and ever-smiling face. Bottlenose dolphins are not only the most well-known friendly species but also the easiest to train, and they enjoy human companionship.

Yes, dolphins can sense human emotion; their big brains have a well-developed amygdala, processing memories and emotional responses. So, dolphins can feel different human emotions like distress, grief, happiness, and love, among others, and react accordingly.

Summary – Are Dolphins Friendly to Humans?

In conclusion, dolphins are indeed friendly aquatic mammals, in fact, some of the friendliest and most selfless creatures of the sea. Moreover, some of them can be the man’s best friends and most fun companions.

However, as with every other wild animal out there, dolphins should be treated with great caution. If you want to interact with dolphins, the water parks are the best places to do so. You should never approach wild dolphins.

In addition, dolphins are one of the most intelligent animals on the planet and are very important to humans and the ecosystem, so we must preserve their species. It would be a disgrace not to protect their environment and make it easier for them to be part of our lives.

Thank you for reading. If you liked this post, here’s another popular article: Are sharks friendly to humans?