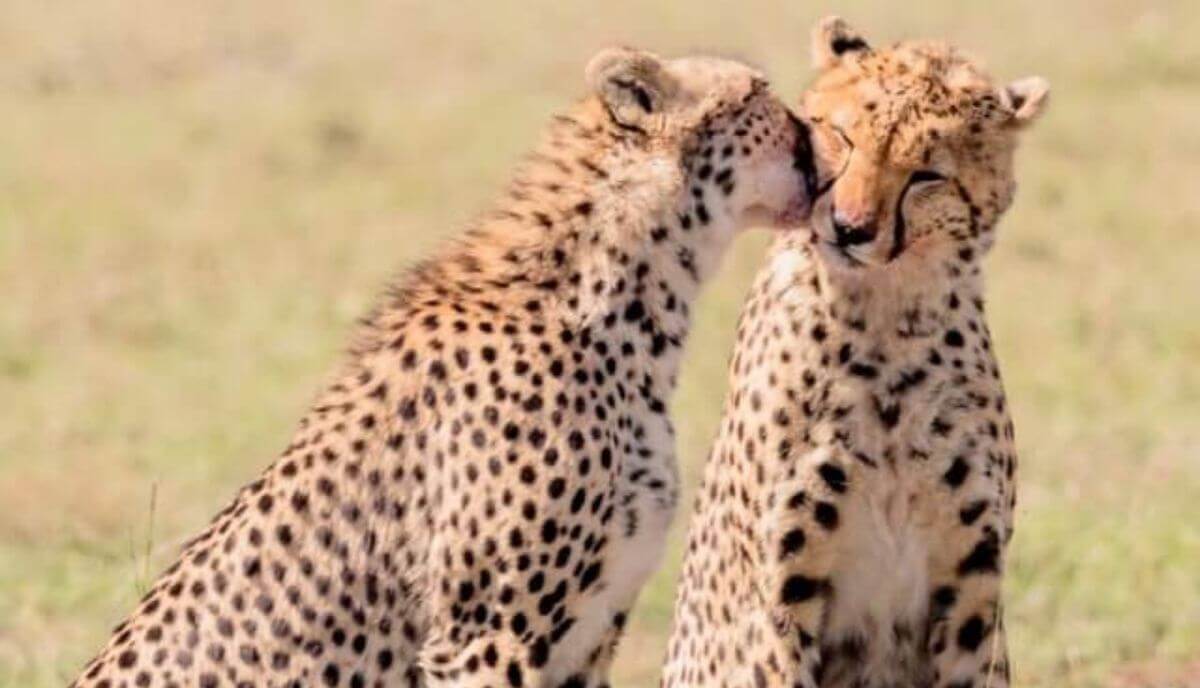 Cheetahs have a reputation for being the fastest land mammals. Their most distinguishing physical features are black dots that cover their bodies.

As predators living in the wild, many are curious to know, are cheetahs friendly?

Even though they are more gregarious than other wild cats, cheetahs are not friendly to humans. They are wild animals, and although they are usually non-aggressive towards people, one should never approach them in the wild. On the other hand, captivity cheetahs can become friendly and affectionate to their breeders and caretakers if trained properly.

How Friendly Are Cheetahs?

Because of their resemblance to domestic cats, cheetahs may appear friendly and cuddly animals, however, looks may deceive. Wild cheetahs are dangerous cold-blooded predators that kill big animals regularly.

Much has been recorded about cheetahs in the wild. As adults, females are a bit snobbish. They rarely socialize with other cheetahs, and will particularly avoid other females, unless they are related.

Females live solitary, nomadic lives, and will interact with males only when they cross through the males’ territories, or when they are in estrus.

Once a female has a litter of their own, she will nurture them until they are of age. On average, cubs will stay with their mother until they are anywhere between 16 to 24 months before they go out on their own.

When the cubs leave the nest, the males go out in search of their territories. While the females may either leave or stay close to home if they have sisters.

Male cheetahs will live solitary lives, carving out their own territories. This happens in particular if they were the only males in the litter. If a litter has more than one male, they will move out and live, groom, hunt, and claim territory together.

Occasionally, a coalition may include other cheetahs that are not related if they grew up around the same area. Other times a coalition may be composed of solitary, unrelated males coming together.

Are Cheetahs Friendly With Each Other?

Cheetahs are generally friendly with each other within a family or coalition. When they encounter other cheetahs they are familiar with, their behavior will be similar to that of dogs. Additionally, they have been known to form close attachments too.

In instances when one of their members is lost or separated from the group, they call out to each other until they are reunited. (source)

However, there are exceptions to this, for example, if a non-related male seeks to join a coalition of males that are related; it will endure periods of aggression from those that are related.

However, the periods in between are harmonious, and the ‘outsider’ will rarely leave the coalition they have joined despite these aggressions.

Cheetahs, by far are the most docile member of the cat family. This is seen in their behavior in the wild. Cheetahs will usually avoid other larger cats in the wild.

Unfortunately, this avoidance could be a learned instinct. A huge majority (up to 90%) of cheetah cubs are often hunted and killed by other predators.

Also, when cheetahs hunt, their food is often stolen by lions or hyenas.

Cheetahs in the wild therefore grow up knowing the importance of avoiding other predators. They will consequently hunt during the day, unlike most other predators, who are either asleep or socializing in their groups at that time.

Some reasons for this are likely, to avoid competing for prey, to avoid having their kill stolen, and for females, to provide for their young while minimizing the risk of losing their young.

Can Cheetahs Be Domesticated?

Yes, it is possible to domesticate cheetahs. Domesticated cheetahs have been known to display dog-like behavior. They will sniff, rub cheeks, and even lick their humans. In earlier days, cheetahs have primarily been tamed for hunting purposes, hence the nickname, ‘hunting leopard’.

However, cheetahs have throughout history been kept as pets by famous historical figures such as Genghis Khan and Charlemagne. Akbar the Great of India was said to have owned more than 9,000 of them!

Today, cheetahs still enjoy their status as symbols of wealth in some countries.

Yet, it is crucial not to underestimate the degree to which a wild animal can be tamed. The domestication of cheetahs, and other wildlife, in general, is not recommended, as they never completely lose their ‘wild’ instincts and could pose a threat.

Cheetahs do not pose an active threat to humans and generally do not have a high history of aggression towards people. However, it is a myth that wild cheetahs like humans. These cats are led by their predatory instincts and may perceive people as threats. The same way they see other animals.

Yet, human history has long been intertwined with that of cheetahs. They have lived peacefully with humans since before 3,000BCE, being revered as symbols of royalty.

So, it’s safe to say that because cheetahs have been part of human society in the course of history are the least dangerous towards humans of all big cats as they are naturally used to people’s presence.

This is why in Safari tours, cheetahs will display inquisitive behavior towards tourists in cars. They climb onto or even put their heads into vehicles if the windows are open. They will sniff around, investigate what’s going on as they are naturally curious animals.

Because of this one may think that cheetahs are friendly and like humans, but don’t be deceived, they are still wild and dangerous animals.

In Summary  – Are Cheetahs Friendly?

Cheetahs are a curious species and will not hesitate to investigate something new in their territory, such as a vehicle with tourists. Because of that, some people tend to believe that cheetahs are friendly animals by nature, but the reality is they dangerous animals. Another reason cheetahs may appear friendly is various videos online displaying their affectionate behavior towards their caretakers.

However, these are captivity cheetahs, and unlike wild ones, cheetahs in captivity may develop a friendly connection with their caretakers.
If you happen to bump on wild cheetahs, it is highly recommended not to try to approach or touch the animal. Keep in mind that cheetahs are predators and wild creatures, and they should be treated accordingly.

And that’s all. I hope this article has helped you with the question “are cheetahs friendly”? If you enjoyed this article, I would also like to recommend you – Are Lions Friendly?