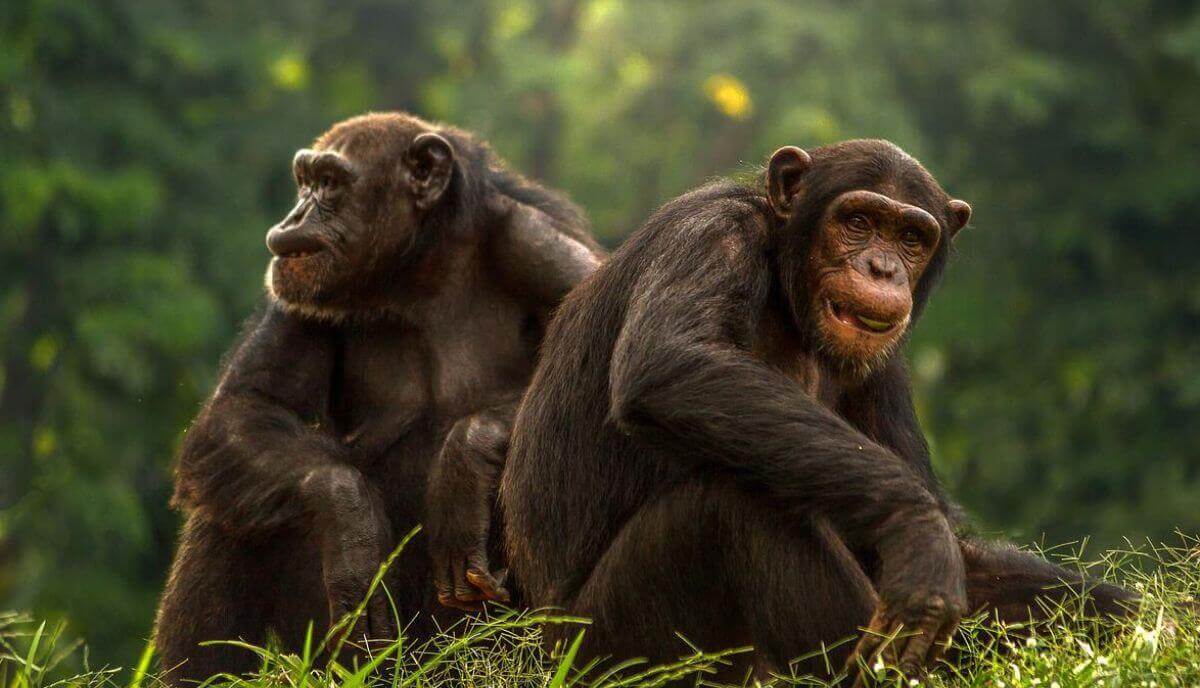 Did you know bonobos share 99.6 percent of their DNA with chimpanzees? Yes, they are almost identical!

You may also know that chimpanzees are known for their destructive and unpredictable actions, but what about closest relatives – are bonobos violent animals as well?

Unlike chimpanzees, bonobos are not violent but rather peaceful apes. They form strong bonds with each other and, most of the time, choose love over fight. Whenever bonobos display violent behavior, it is usually in an effort to protect themselves or their group members.

If you want to learn more about these fascinating great apes, read on!

For the most part, bonobos are not dangerous. They may fight when encountering a threat, such as another group of bonobos, but they generally avoid unnecessary aggression. Like most non-predatory animals, bonobos would probably run away if they saw a human coming.

A smart idea considering they are endangered species due to poaching and deforestation.

Interestingly, bonobos have female leaders and constantly engage in sexual activity with members of the group. Scientists have found that they use sex as a way to reinforce bonds within their group.

This type of behavior makes them highly empathic and loving and reduces their likelihood of being a danger to humans.

All things considered, it is humans that are dangerous to bonobos. Unfortunately, humans have poached this species and destroyed their habitat to the point that they are an endangered species.

To this day, there is no record showing a bonobo attack on a human. These apes are usually very curious about other species, and in the wild, they would probably show interest over aggression when meeting a human. Even in areas where they are hunted by humans, bonobos will rather flee than attack humans when they see them.

However, even though bonobos do not attack humans, you should not try to approach one in the wild. Don’t be fooled by their reputation as “hippies of the primate world.”

Under certain circumstances, these primates can be deadly.

According to studies, bonobos are capable of jumping one-third higher than the top-level human athlete. Furthermore, bonobos can generate more force than a nearly two times heavier person.

Getting into a clinch with such a powerful creature is not a good idea.

If you ever encounter a group of bonobos during an African safari, the best thing you should do is to keep your distance.

Most likely, bonobos will ignore you or run away, but better safe than sorry. You do not want to be responsible for the first case of a bonobo attacking a human.

Bonobos are not considered aggressive, even though they can display bouts of aggression when threatened. Bonobos are actually very curious and generous, and they love to share food, even with outsiders.

In a famous experiment by Brian Hare and Suzy Kwetuenda, two bonobos were placed next to each other in separate but connected cages. Food was later given to only one of them.

The results surprised the scientists; the bonobos had a preference for sharing. The bonobo with food would share it with its neighbor first, helping it eat, even if it didn’t know the other ape.

You might also be interested in learning about other primates and their aggression. We recommend you check out our article on how dangerous are mandrills to humans?

Are Bonobos More Aggressive Than Chimps?

Chimpanzees are definitely more aggressive than bonobos. Despite being almost genetically identical, these species behave very differently. Chimpanzees often show displays of dominance and aggression, frequently killing other chimpanzees and sometimes even their own infants.

Bonobos live in tight-knit, female-led groups and frequently engage in play and sexual activity as a way to reduce tension between the group.

As a species, they are very playful and tolerant. Chimpanzees tend to be very competitive and cunning, which are encouraged in their groups.

Bonobos, on the other hand, favor cooperation and are very empathic with each other.

As a result of such actions, there are currently only about 20,000 or fewer bonobos left in the wild.

In summary – Are Bonobos Violent?

In short, bonobos are not violent. They are peaceful creatures with laid-back lifestyles. But still, remember, like all other wild animals out there, bonobos can potentially be dangerous when provoked.

Groups of bonobos are usually very passive, but even so, a fight will break out every now and then. Female bonobos have been known to attack males from time to time, but for the most part, differences are settled through sex, not fights.

We do not know a lot about bonobos yet. Due to the political instability in the regions they inhabit, there hasn’t been much research done on this species.

For a long time, they were actually thought to be a smaller breed of chimpanzees, known as pygmy chimpanzees. It wasn’t until 1954 that they were found to be a separate species.

Thank you for reading. If you liked this post, here’s a recommendation of another popular article: Top 5 Strongest Monkeys