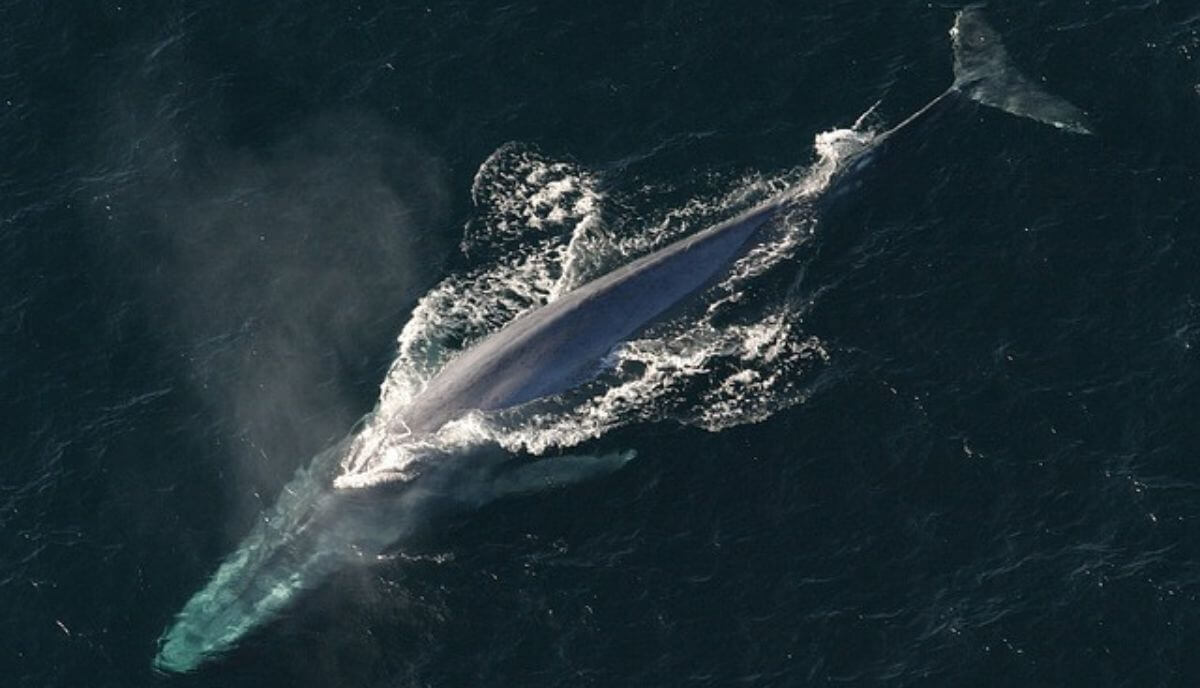 Blue whales are the largest animals on Earth, and that fact alone can make some people think that blue whales are like raving sea monsters.

So, is it true or just a myth? Are blue whales dangerous to humans?

Despite their enormous size, blue whales are not dangerous to humans. These marine mammals are not predators, and except for accidental incidents, they are completely harmless and non-aggressive towards people.

You would be surprised to know that these animals would rather eat something tiny. Let’s find out more about this fantastic aquatic giant.

Blue whales do not eat humans, even if they want to. They have giant mouths up to 20 ft. long, large enough to fit in a human, but they cannot swallow a person whole because of their throat structure.

In addition, these sea mammals have no teeth, and they’re all bark and no bite, literally.

Blue whales eat krill, small shrimp-like crustaceans that live in large schools near the surface of the water. They use their enormous mouths to scoop up dozens of these tiny creatures at once and stuff them down their throats.

They are baleen whales with a pair of long fringed plates called baleen hanging from their upper jaw. Baleen comprises keratin fibers and forms a sieve for scooping up food. The whale uses its tongue to push water through its mouth and out the sides of its mouth.

Hunting for food is challenging for these massive creatures because they need so much food, and it can be hard to find enough krill in one place.

So instead, blue whales will wait until they spot a large school of krill before swimming up behind them and engulfing them with their wide-open mouths.

Blue whales do not attack humans. These gentle giants have never been reported to attack or harm humans in any way. You’ll likely see blue whales near coastlines because there is a lot of food there (krill). If you swim close to a blue whale, it will probably just ignore you or swim away.

Most of us lack the courage to swim next to something that huge, but some courageous people get close to blue whales so they can take pictures of them.

Blue whales may come closer to investigate if they hear the loud noises made by ship engines, but they do not attack.

To prove how mild these creatures are, they don’t strike other sea animals except in self-defense. While it’s true that some species of whales do have sharp teeth and can bite down hard, the truth is that blue whales have far more reason to fear humans than we should fear them.

Humans hunt and kill whales for their oil and meat and also harm them unintentionally. Vehicle strikes kill blue whales too.

Also, sometimes, they get trapped in fishing nets which can cause fatal injuries such as cuts and lacerations.

Blue whales are not aggressive animals. They are known to be gentle, intelligent creatures, demonstrated by their curiosity. Blue whales sometimes approach boats or swim right up to them, but they never harm. However, when a whale is threatened or afraid, it can defend itself by biting and thrashing around with its tail.

Self-defense may be why some people fear whales – they confuse this defensive behavior with aggression when it’s just a reflexive reaction to an immediate threat.

If a blue whale senses a threat to its calf, it may charge at the perceived danger to scare it off. The only other time a blue whale will attack another animal is if it is attacked.

Blue whales have no natural enemies in the ocean, except for killer whales, which sometimes attack them.

Blue whales are very social animals, and they communicate by emitting sounds from their blowholes that carry for miles underwater.

Traveling in groups (pods) is another efficient way of self-protection, especially for young calves.

This section will answer some of the most common questions about blue whales.

Yes, blue whales are friendly and gentle animals. This friendliness may be due to their curiosity about human beings, their need to communicate with other animals, or both.

Blue whales have been known to approach boats, and you can even pet them. This behavior shows that the blue whale is a friendly creature who wants to get close to humans and other animals like dolphins, which are often found swimming alongside blue whales underwater.

It’s reasonable to imagine that a large animal like a blue whale may be unfriendly or violent toward people. But this is undoubtedly not the case.

You shouldn’t worry about seeing a blue whale. They are clever creatures who pose no harm to people.

Most of the time, people are not going to go close enough to a whale, much less a blue whale, for fear of being hurt.

Can You Swim With Blue Whales?

Should you touch blue whales? It might be tough not to feel one, especially if it’s your first experience swimming close to something that huge.

As mentioned, blue whales are entirely harmless (except for threatened ones); the problem is their defense mechanism.

While swimming close, you could mistakenly touch their babies. The parent may misunderstand your contact with the calves in an aggressive signal. It will go into defense mode and battle to protect its young!

Apart from that, touching a blue whale may not be safe. These mammals live in water and have no hygiene besides what the ocean offers.

An injured blue whale will have bacteria on its skin, and touching them puts you at risk of contracting diseases.

One of the most prevalent diseases is brucellosis, which affects any marine mammal’s reproductive and neurological systems and may be transmitted to humans by contact with most of the marine mammal’s secretions.

Also, sunscreen can harm them, so you should avoid touching them if you’re wearing one.

Wrap Up – Are Blue Whales Dangerous?

The blue whale is one of the largest animals ever created by nature, but despite their gigantic length and weight, you should not fear them.

While it is true that people see big animals as monsters, blue whales are not aggressive or dangerous to humans. They’re too large to feel intimidated, and they only display aggression in self-defense. You could likely swim alongside a blue whale without any problems.

Thank you for reading. If you liked this post, here’s another popular read: Are Beluga Whales Friendly Animals?