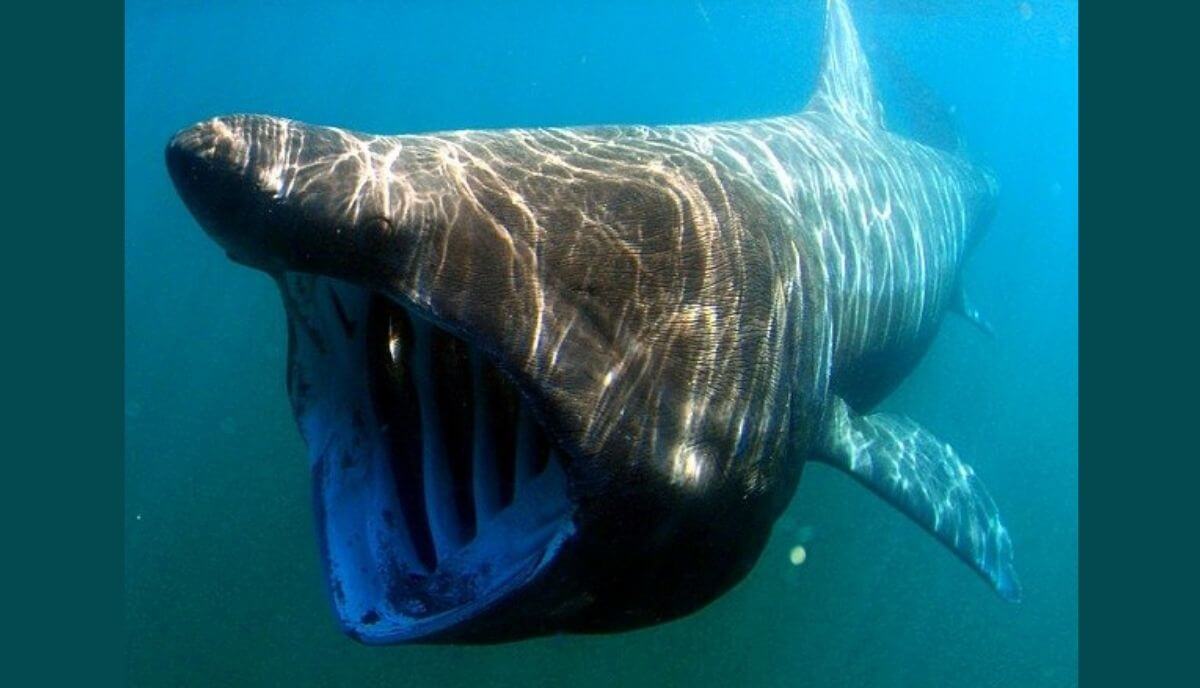 If somebody asked you to jump into the water with a 30-foot, 16-ton shark with a cavernous mouth over 3-feet wide, you would probably say “absolutely not.”

This description is the veritable stuff of nightmares for a thalassophobia person or anyone not possessing an urgent death wish.

But does the fear come because of their size, or are basking sharks dangerous for real?

No, basking sharks do not eat humans, as people are not on their regular menu. Basking sharks feed exclusively on plankton and other microscopic invertebrates, and despite their huge mouths, they are not capable of eating anything much larger.

Basking sharks are what are known as “filter feeders,” which means their mouths are specially adapted to filter plankton and other tiny invertebrates out of the water.

To meet their dietary values, these big-mouth sharks filter out hundreds of pounds of plankton every day!

Unlike many other filter feeders, basking sharks do not actively suck water into their mouths but simply swim around with their massive jaws open, filtering their food from the water as they go (not a bad life, really).

They swim around two miles per hour (3.2kph) and can filter over two tons of water in that time.

You May Also Like: Are Grizzly Bears Dangerous to Humans?

While they are physically capable of closing their mouths, it could not be said that basking sharks bite. Basking sharks are equipped with teeth, but these are a quarter of an inch (5mm) long and do not actually play any part in feeding.

It is believed they are used during the mating process. However, as this has never been recorded, their exact purpose is still unknown.

Basking sharks feed by swimming with their mouths open and filtering water out through their gills.

Microscopic animals are trapped by the shark’s gill rakers (cartilaginous, comb-like structures situated between the gills) and eventually swallowed.

As they have no need to “catch” their prey (they simply swim around hoping the prey winds up in their mouths by luck), their mouths do not need to open or close with speed, nor do they need strong jaw muscles.

No human has ever been intentionally attacked by a basking shark. The only recorded incident of humans coming to harm by a basking shark was unfortunate and unusual. Off the UK coast in 1937, a basking shark accidentally capsized a small fishing boat when it jumped out of the water. Tragically, the three people on board drowned.

Were a basking shark to attack a human intentionally, it is difficult to imagine what damage it could do, considering its teeth are less than a quarter of an inch long.

Theoretically, it could swallow a human, but this has never happened either.

This is likely because basking sharks are not true predators and feed almost exclusively on plankton. Therefore, humans are simply not on the menu.

In fact, humans are far more dangerous to basking sharks than they are to us.

Basking sharks are unfortunately hunted for their (alleged) use in traditional Chinese medicine, as well as for their fins, which are the main ingredient of shark fin soup.

They are also frequently caught accidentally in fishing nets, and, as most sharks need to move in order to breathe, they usually drown before they can be set free.

This has led to basking sharks being placed on the IUCN Red List as an endangered species and the creation of various protective laws in certain countries.

Read Also: How Dangerous Are Panthers?

Is it Safe to Swim With Basking Sharks?

Basking sharks are gentle, docile creatures and are known to be tolerant of swimmers and divers. In fact, several tour companies worldwide offer experiences in which tourists can pay to swim or dive with wild basking sharks. People describe these sharks as either indifferent or politely curious of their human visitors, with some apparently circling around the swimmers to get a better look at them.

As mentioned before, basking sharks are not aggressive and humans do not form part of their natural diet, nor, indeed, does anything larger than a few millimeters long, so they would not attack humans for food.

They also face very few predators in the wild themselves, with a possible exception of orcas, so they are not naturally fearful (an emotion often responsible for attacks in other species).

Due to their passive nature and generally laid-back attitude, basking sharks make rather good swimming companions, and the practice is generally considered to be perfectly safe.

Yet, it is worth bearing in mind that basking sharks are enormous animals with powerful tails and rough, denticle-covered skin. It is also believed that their eyesight is not particularly good, making them less aware of their surroundings than one might expect.

While they are exceptionally rare, accidents could happen, mainly as they are wild animals, generally not accustomed to having humans around them. It is, therefore, wise to treat them with respect and a little healthy distance, for their sakes as much as one’s own.

In Summary: Are Basking Sharks Dangerous?

In short, basking sharks non-aggressive sharks, and they are not dangerous to humans. These gentle, slow-moving giants are more interested in cruising around in the sun, eating in arguably the laziest fashion imaginable, than in harming humans.

Encounters between basking sharks and humans often happen and almost always result in a good time had by all (we can assume, though, an entirely neutral time may be had by the sharks).

The threat they could potentially pose to us is immeasurably tiny compared to the danger we have posed to them for hundreds of years and, unfortunately, still do today. We can only hope that more significant efforts will be made to protect them before these beautiful creatures disappear from our oceans altogether.

And there you have it, with this, we have completed the “are basking sharks dangerous to humans?” article. Thank you for reading!

If you liked this post, here’s another recommendation: Are Sea Lions Dangerous?